While gaming is almost always a major focus during these GPU launches, professional applications are becoming more and more important. In fact, if you view the product page for the 6900 XT, you will note that they are starting to include Content Creation performance from benchmarks like our very own "PugetBench for Premiere Pro".

One thing we will note is that we tested far fewer applications with these cards compared to what was in our NVIDIA GeForce RTX 3070 8GB, RTX 3080 10GB & RTX 3090 24GB Review Roundup post. This is because many of the applications we normally test (including OctaneRender, V-Ray, RedShift, RealityCapture, and Pix4D) currently require CUDA, which makes NVIDIA the only option. In addition, there are other applications where we ran into issues due to other features that don't work with AMD cards or where a very recent software update changed the results enough to delay our testing with those applications. 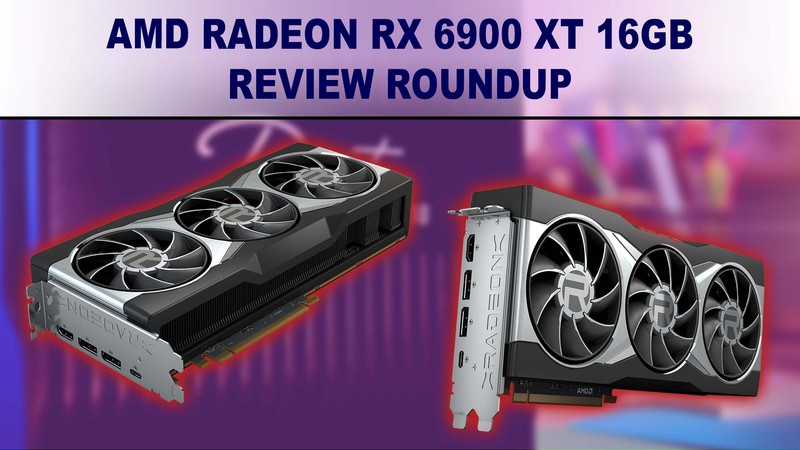 Summary: From an overall standpoint, the Radeon 6900 XT is solidly beaten by the significantly less expensive GeForce RTX 3060 Ti by about 10%, and falls behind the more closely priced (although still cheaper) RTX 3080 by a larger 23%. And when looking at especially GPU bound tasks like noise reduction and OpenFX, the results are even more in NVIDIA's favor with the GeForce RTX 3080 scoring a massive 56% higher than the Radeon 6900 XT. 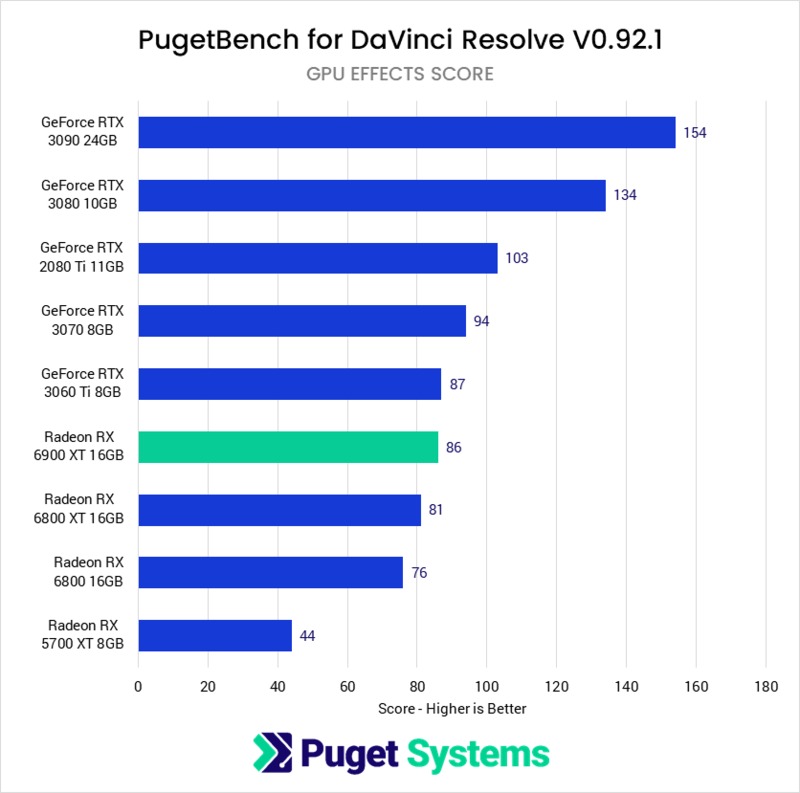 Summary: While the AMD Radeon 6000 series cards are a major improvement over the previous generation, NVIDIA simply has too large of a lead for AMD to be able to catch up. In addition, there isn't much of a performance difference between the $579 Radeon 6800 and the $999 Radeon 6900 XT in Premiere Pro as the 6900 XT scored at most just 7% higher than the 6800. All of this combines to make the Radeon 6900 XT a fairly lackluster option for Premiere Pro. In the GPU portion of our benchmark, the Radeon 6900 XT is only able to match the NVIDIA GeForce RTX 3070 (even though the RTX 3070 is almost exactly half the cost) and falls behind the RTX 3080 by about 12%. 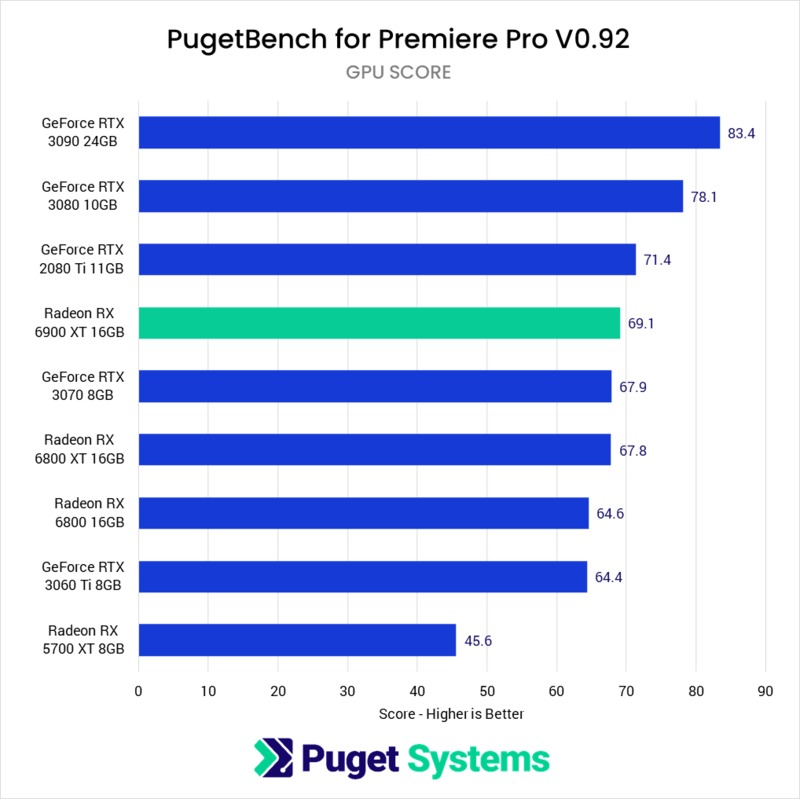 Summary: For most users, After Effects is going to be CPU bottlenecked long before the performance of your GPU comes into play. But even in situations where the GPU is being heavily used, the AMD Radeon 6900 XT 16GB is not a card we would specifically recommend. The performance is not particularly bad, but it also is not much better than the much lower-priced Radeon 6800. 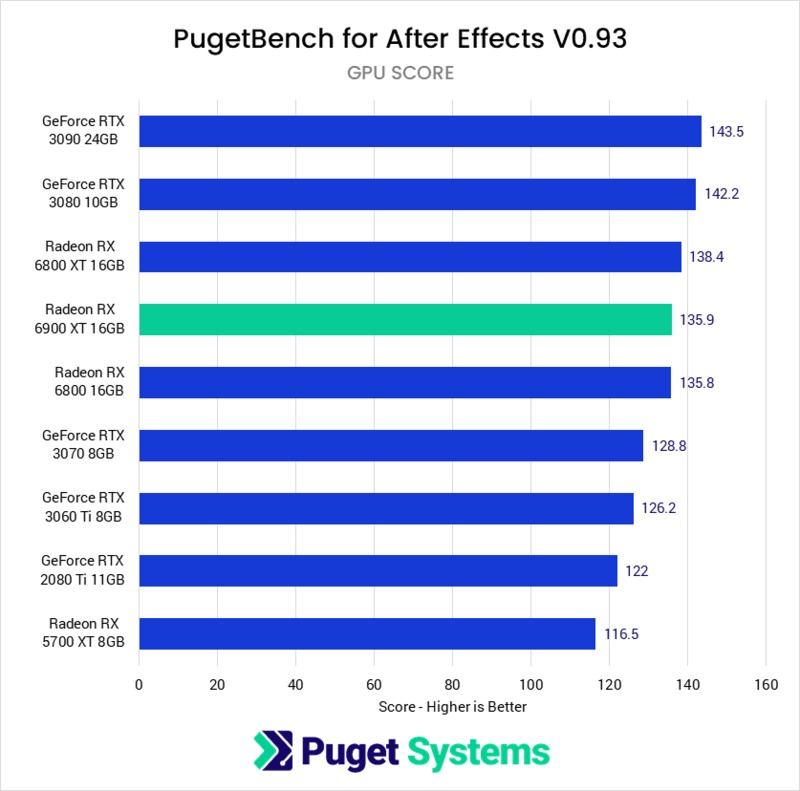 Summary: While the new AMD Radeon RX 6900 XT performs just fine in Photoshop, the GPU is a very low priority when designing a Photoshop workstation. It is very important to have a supported GPU, but all the cards we tested performed within the margin of error for our benchmark, so there is no reason to invest in a higher-end GPU for Photoshop. So, while the 6900 XT performs just fine in Photoshop, you might as well save your money and get something like a GeForce RTX 3060 Ti or Radeon 5700 XT and spend the savings on a more powerful CPU. 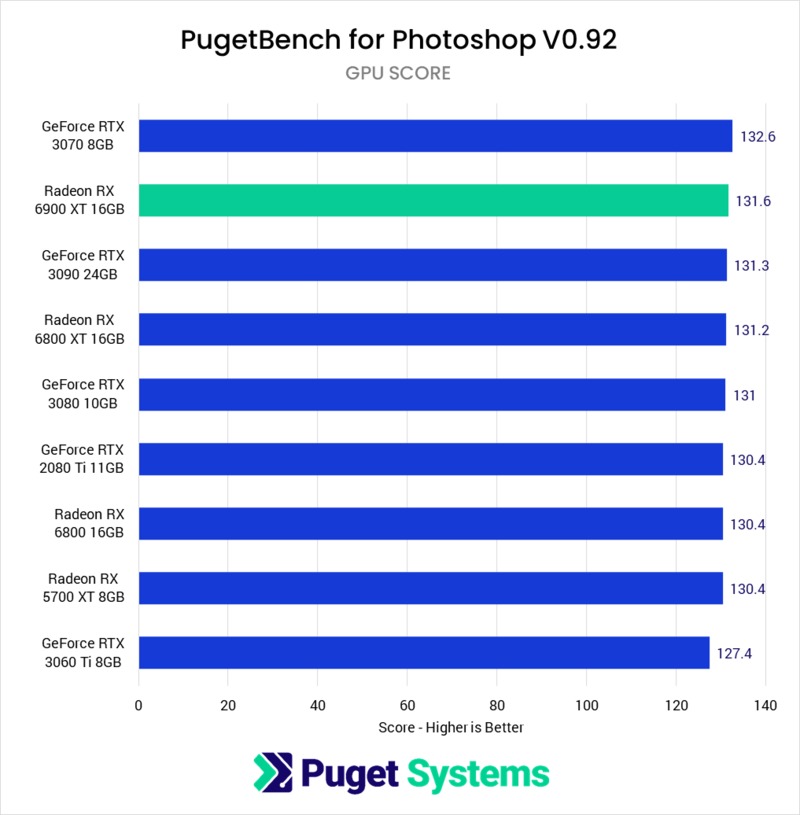 Summary: How well a video card performs in Unreal Engine really depends on what type of work you are doing. Most users are adopting Unreal Engine into their workflows due to its real-time rendering, especially with ray tracing and global illumination. In these workflows, the AMD Radeon RX 6900 XT falls behind the offerings from NVIDIA. 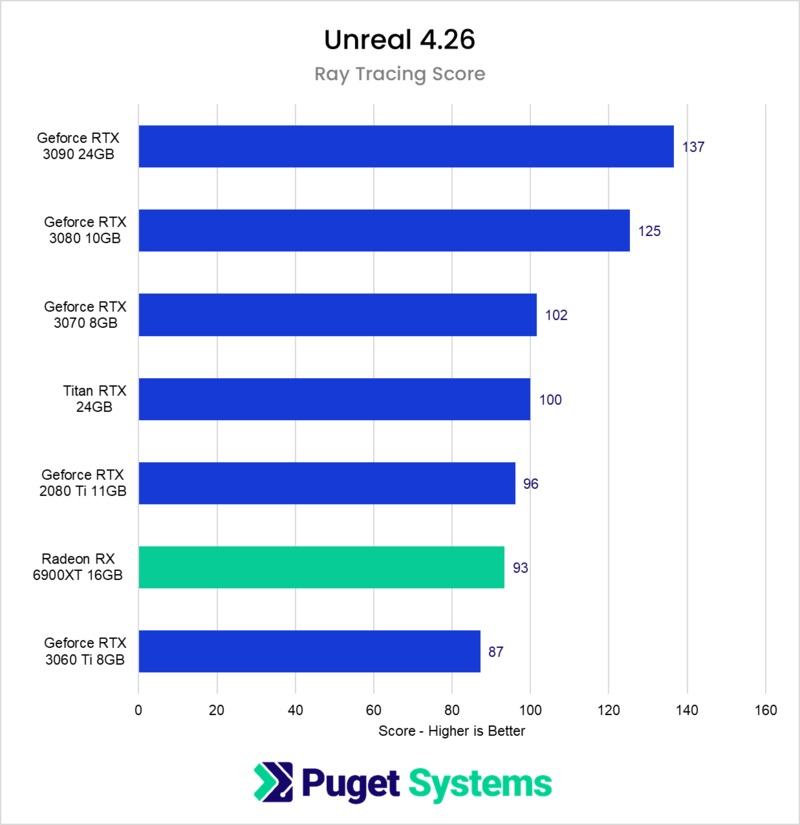 How well does the AMD Radeon 6900 XT 16GB perform overall?

In most of our testing, the new Radeon 6000 series cards are significantly faster than the previous generation AMD GPUs. In fact, in a few cases they are as much as 83% faster than the 5700 XT! Unfortunately, there are some problems with these new Radeon cards - especially when it comes to the 6900 XT in particular.

First, NVIDIA also saw some terrific performance gains with their RTX 3000 series cards, so while the Radeon 6000 series cards cards would have put AMD in a terrific position a few months ago, NVIDIA maintains their (albeit slightly slimmer) lead in content creation applications. In some cases like Photoshop and After Effects, NVIDIA's lead isn't that large, but in Premiere Pro and especially DaVinci Resolve Studio, the lead can be very significant.

The second issue is that the Radeon 6900 XT in particular is not much faster than the lower cost 6800 XT. Even in DaVinci Resolve, which usually benefits from a more powerful GPU, the 6900 XT was only 6% faster than the 6800 XT. In all the other applications we tested, the performance advantage was even less - often just a percent or two at most. Because the performance isn't that much better, it makes NVIDIA take an even further lead at the ~$1000 price point. Comparing the 6900 XT to the RTX 3080 (which is actually only $699), NVIDIA takes up to a 56% performance lead in heavy GPU applications like DaVinci Resolve or a smaller 12% lead in applications like Premiere Pro that do not utilize the GPU quite as heavily.

The larger 16GB of VRAM on the 6000 series cards can be useful in some workloads, but it is worth noting that in many of the applications where it might matter (such as DaVinci Resolve), NVIDIA holds a sizable performance lead. So, you will need to decide if the relatively low cost to get 16GB of VRAM is worth the large performance loss versus paying more for a card like the RTX 3090 24GB.

Due to the performance we saw with the Radeon 6900 XT, we currently have no plans to offer them in our workstations. But if you are in the market for a system, be sure to visit our solutions page to view our recommended workstations for various software packages, our custom configuration page, or contact one of our technology consultants.