While the new AMD Radeon RX 6900 XT performs just fine in Photoshop, the GPU is a very low priority when designing a Photoshop workstation. It is very important to have a supported GPU, but all the cards we tested performed within the margin of error for our benchmark, so there is no reason to invest in a higher-end GPU for Photoshop. So, while the 6900 XT performs just fine in Photoshop, you might as well save your money and get something like a GeForce RTX 3060 Ti or Radeon 5700 XT and spend the savings on a more powerful CPU.

While gaming is almost always a major focus during these GPU launches, professional applications like Photoshop are becoming more and more important. In fact, if you view the product page for the 6900 XT, you will note that they are starting to include Content Creation performance from benchmarks like our very own “PugetBench for Premiere Pro”.

However, even though Photoshop does boast a number of effects that utilize the GPU, these effects tend to perform roughly the same regardless of what GPU is in your system. Because of this, we don’t expect to see a significant gain in performance with any of the new cards from either NVIDIA or AMD in Photoshop, but it is always worth testing to find out if there are any surprises. 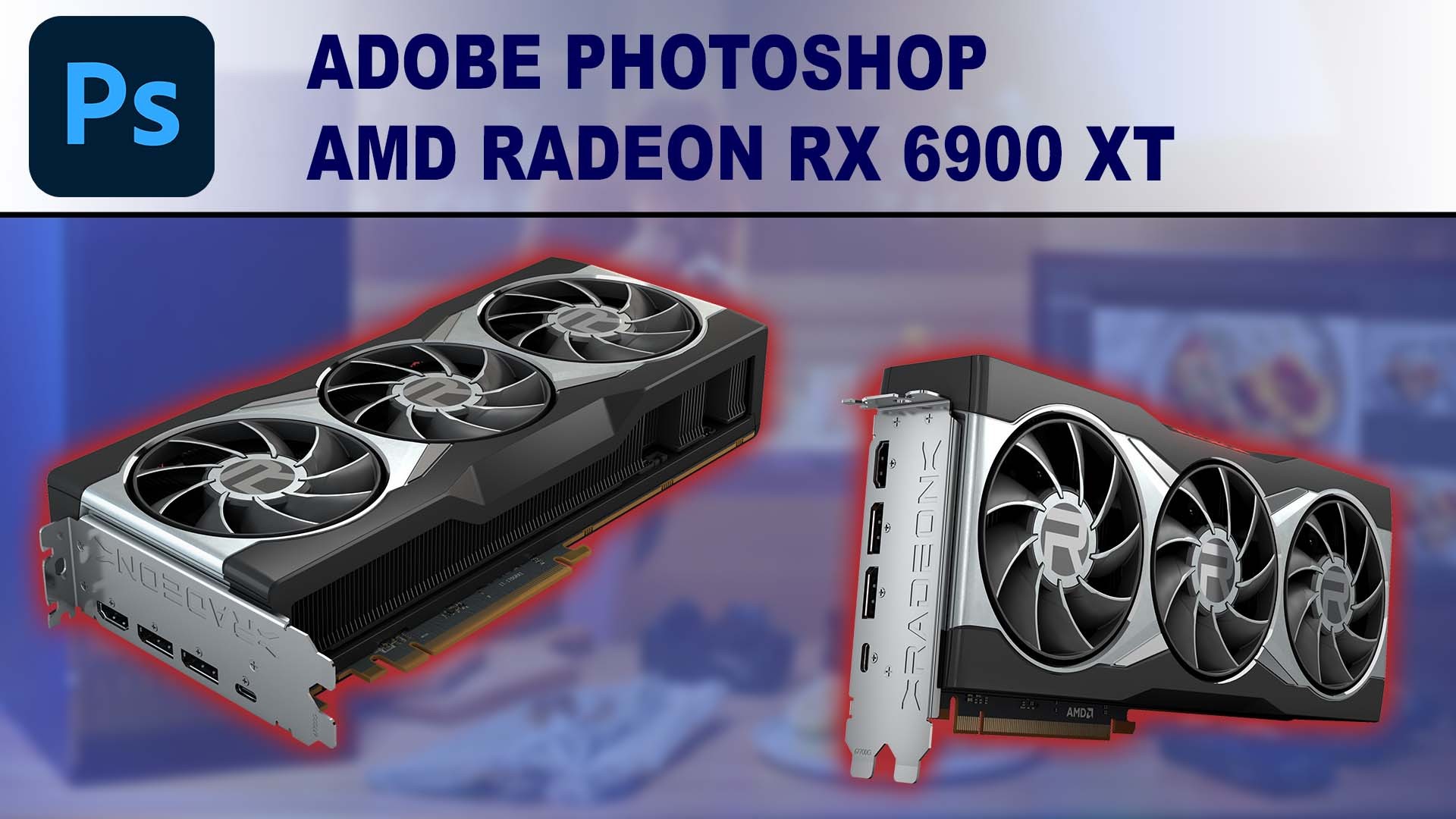 To test each GPU, we will be using one of the fastest platforms currently available for Photoshop – most notably the AMD Ryzen 5950X. Since Photoshop utilizes the CPU so heavily, this should minimize the impact of the processor and allow each GPU to perform at their fullest potential. Even with this, however, be aware that there typically isn’t much variation in performance between different video cards.

But in the interest of being thorough, let’s take a look at the overall performance in Photoshop with each of the cards we tested. 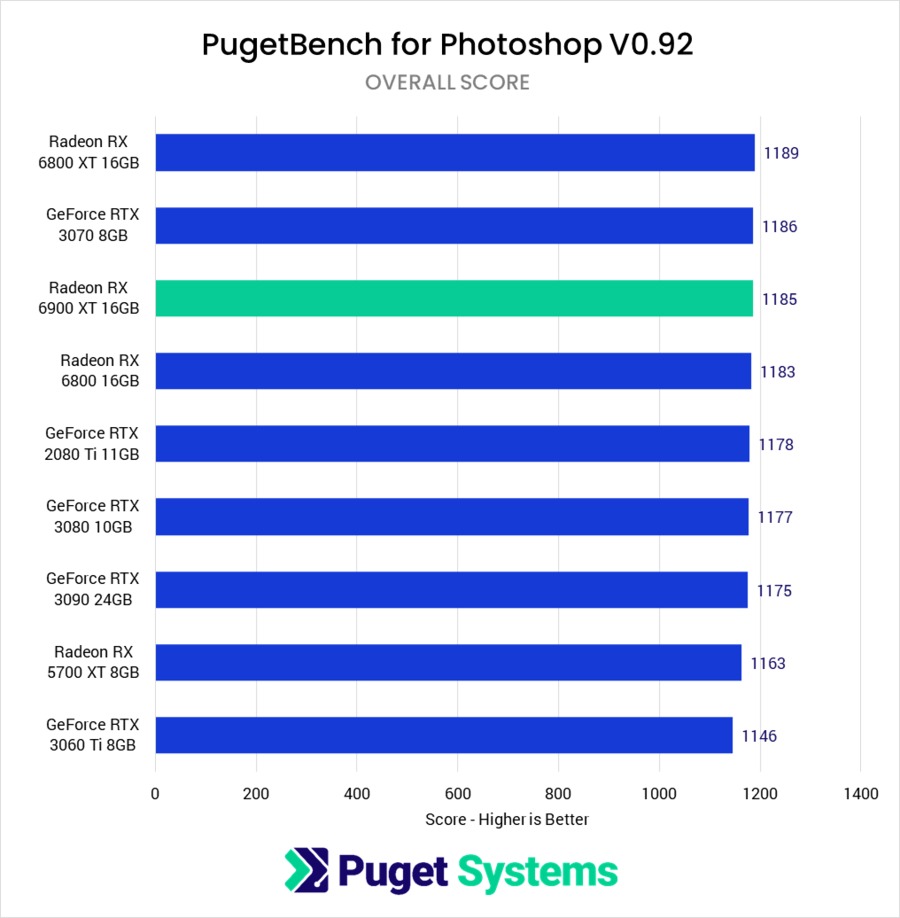 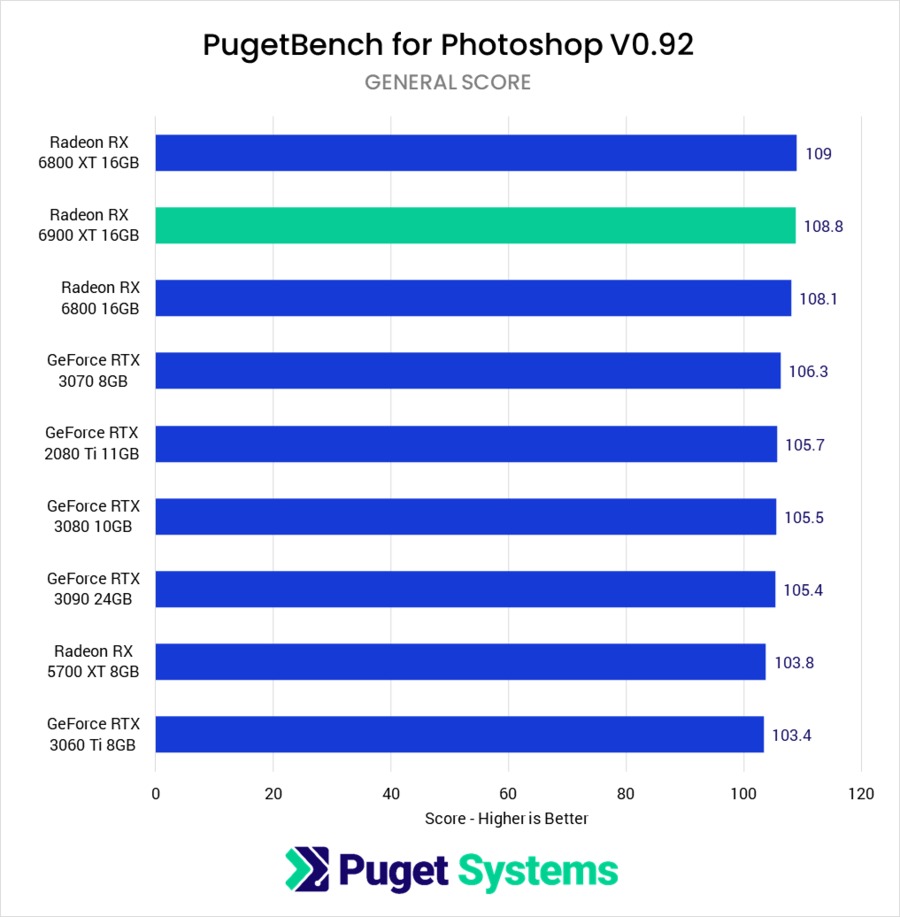 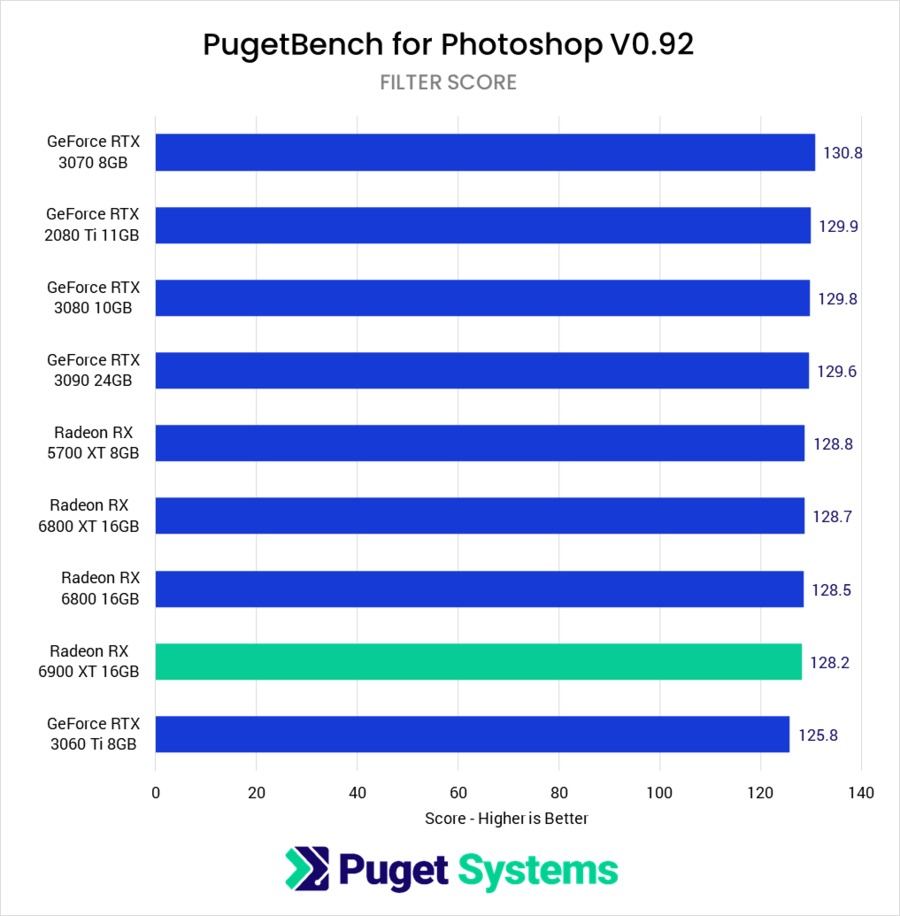 As you can see in the chart above, there is minimal difference between any of the GPUs we tested. Between the “fastest” and “slowest” cards, we only saw a 4% difference in performance, which is just within the margin of error for real-world testing like this. We have found in previous testing that having a GPU does increase performance by ~10% over onboard graphics, but a GPU with more raw horsepower doesn’t result in significantly higher performance than a more modest GPU.

The “General Score” does show a bit more of a variation in performance, and if anything, AMD has a slight lead there with the AMD Radeon 6800, 6800 XT, and 6900 XT topping the chart for that set of tests. Oddly enough, that performance gap is largely from a single effect – Adaptive Wide Angle – that isn’t even supposed to use the GPU at all. We are a little worried that for whatever reason, Photoshop is applying a different setting for this effect on AMD and NVIDIA cards for some unknown reason which we plan on investigating before the next update to the PugetBench for Photoshop benchmark.

However, our benchmark does make a “GPU Score” based on the tests that are GPU accelerated, which should (in theory) be able to show more of a difference between each card. 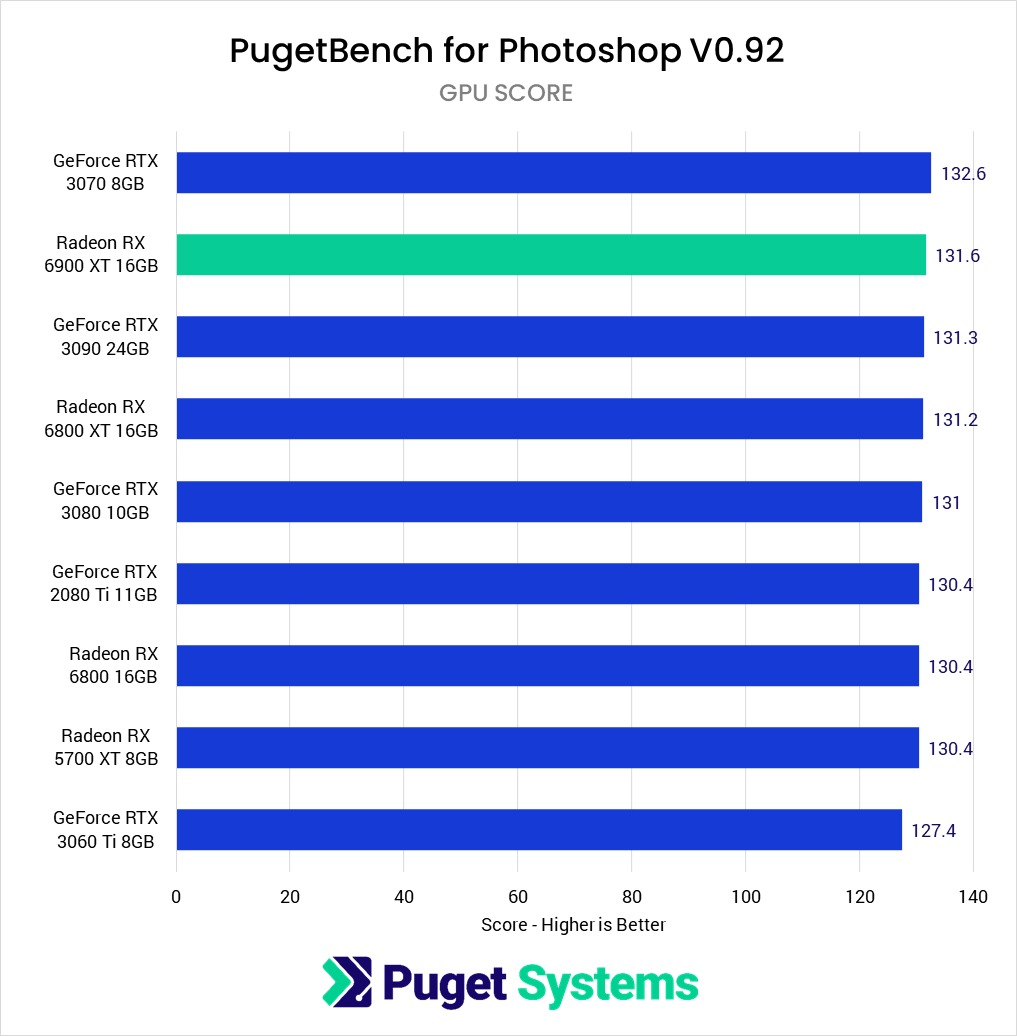 Unfortunately, even if we only look at these specific tests, there is still not a significant difference between each of the video cards we tested. The GeForce RTX 3060 Ti is really the only card that appears measurably slower than the others, but even it is only 4% below the highest scoring card.

How well does the AMD Radeon RX 6900 XT 16GB perform in Photoshop?

While the new AMD Radeon RX 6900 XT performs just fine in Photoshop, the GPU is a very low priority when designing a Photoshop workstation. It is very important to have a supported GPU, but all the cards we tested performed within the margin of error for our benchmark, so there is no reason to invest in a higher-end GPU for Photoshop. So, while the 6900 XT performs just fine in Photoshop, you might as well save your money and get something like a GeForce RTX 3060 Ti or Radeon 5700 XT and spend the savings on a more powerful CPU.

As always, keep in mind that these results are strictly for Photoshop. If you have performance concerns for other applications in your workflow, we highly recommend checking out our Hardware Articles (you can filter by “Video Card“) for the latest information on how a range of applications perform with the new GPUs from AMD and NVIDIA, as well as with different CPUs and other hardware.