Skip to content
Always look at the date when you read an article. Some of the content in this article is most likely out of date, as it was written on February 19, 2020. For newer information, see our more recent articles.

My early testing of the 3990X had focused on two areas: CPU-based rendering, where it did very well, and photogrammetry. In the latter type of workload, having so many cores didn't turn out to be a benefit: models in the same processor family with fewer cores performed as well or better, and cost far less. But maybe that was due to limitations of Windows 10 Pro, rather than AMD's TR 3990X chip itself? Given the claims made by Anandtech in their article, I had to investigate further to make sure we weren't leading our customers astray. 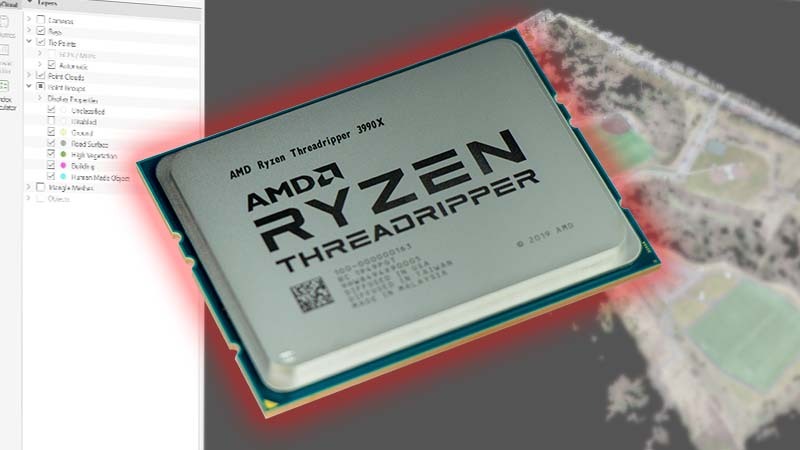 In addition to looking at Windows 10 Pro for Workstations as a potential way to improve performance, I also wanted to check on the impact of SMT (simultaneous multithreading… AMD's equivalent to Hyper-Threading) top see what turning it off might do to rendering. Some applications are known to benefit from turning SMT / HT off, which for example I had observed to be the case in Agisoft Metashape when using processors with more than about 10-16 cores. Given that past experience, I skipped Metashape for this round of testing (knowing that it didn't like high core count processors already), but I thought it would be a good idea to look into the same question for other photogrammetry applications – especially since it was specifically raised as another issue in the Anandtech article.

As a side note, I also took this opportunity to bump up the CPU cooler from Noctua's U12S to the U14S. Our product qualification team had found that the U12S was borderline for cooling the 3990X, and in some situations could lead to very slight thermal throttling. For this reason, some of the normal Windows 10 Pro results presented here may be slightly different than they were in our older articles.

Here is a list of the hardware components that made up my test configuration, along with the OS and application versions which I used:

For testing photogrammetry applications, we have four image sets that we own the rights to – covering both smaller and larger size model and map projects. All of these image sets are available in our public Pix4D and RealityCapture benchmarks, split up to allow quick or extended tests, which you can download and run if you want to compare your system's performance to what we measured here. 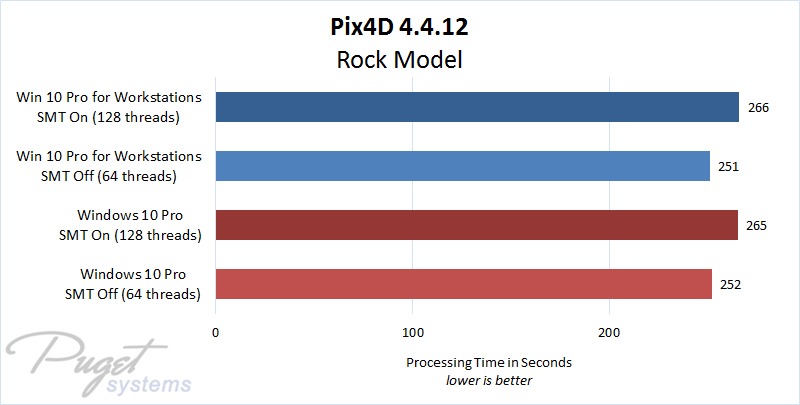 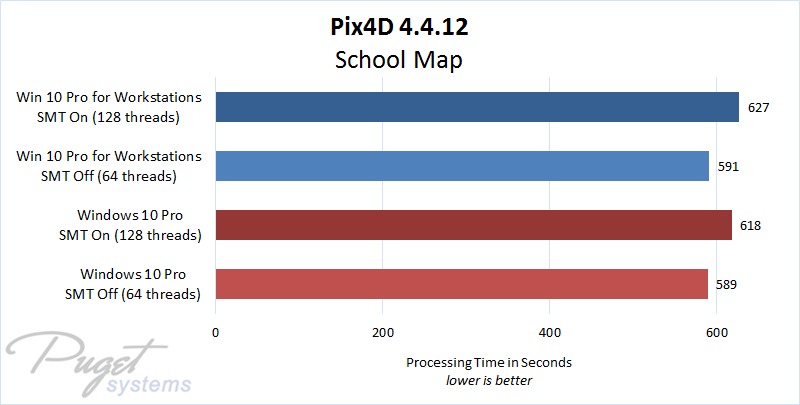 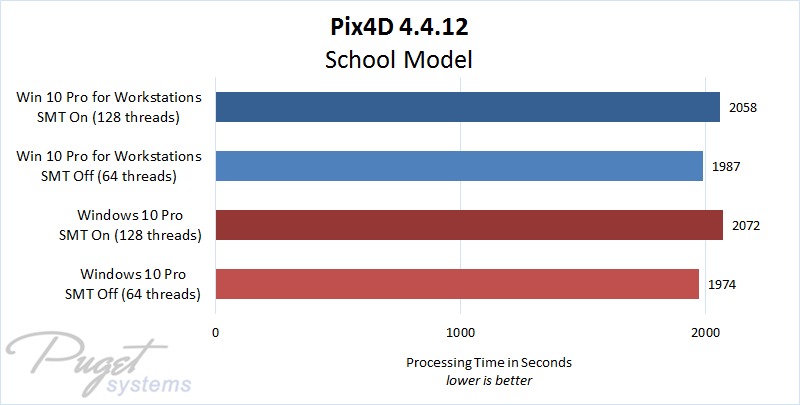 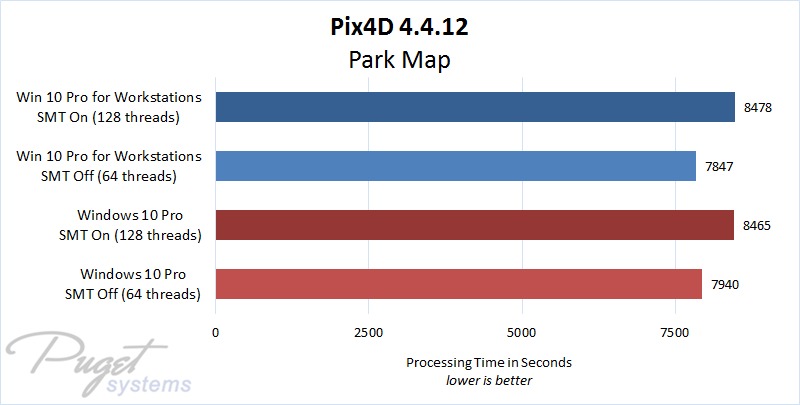 And here is a similar gallery, using the same order and color scheme, with RealityCapture benchmark results: 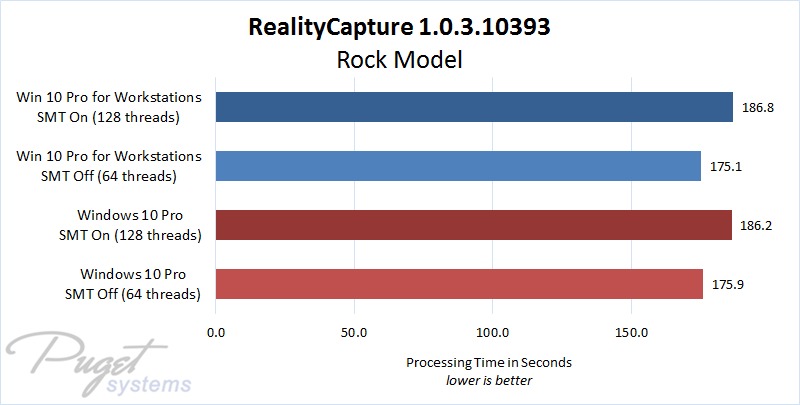 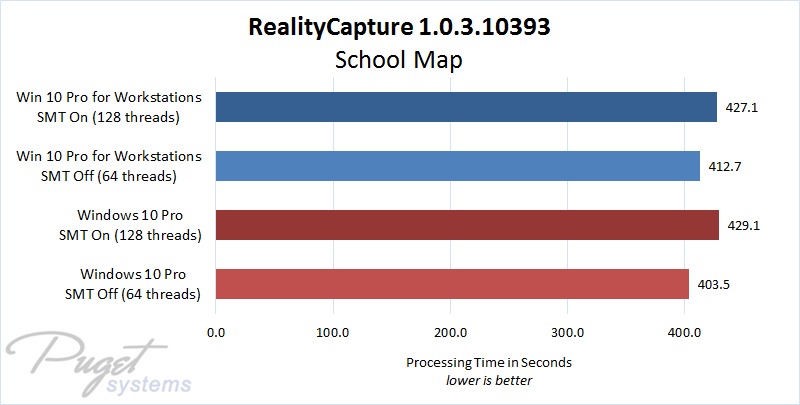 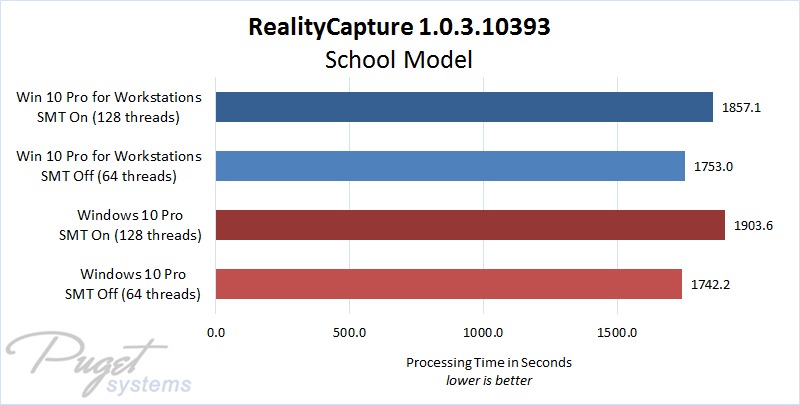 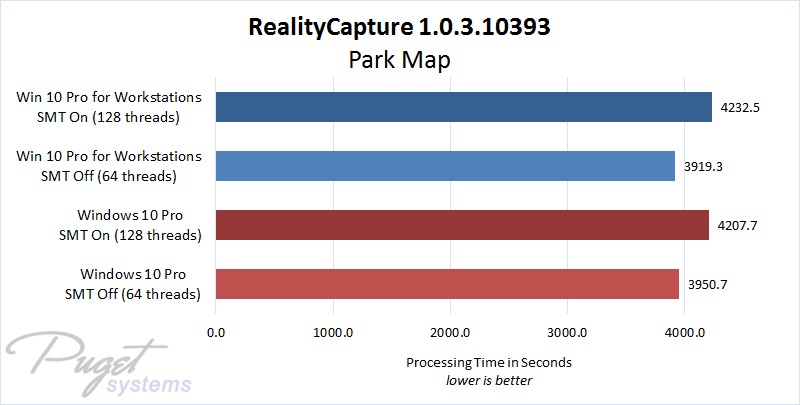 Looking first at the performance difference between operating systems with SMT enabled – Windows 10 Pro with darker red line and Windows 10 Pro for Workstations in dark blue – it looks like there is no substantial benefit either way. Across all eight tests, only one time did the performance variance between the two OSes exceed 1%: the RealityCapture School Model test, where Windows 10 Pro for Workstations was ~2.5% faster. Even that result is still within the margin of error I've observed on these photogrammetry benchmarks, though, and since the other seven tests all came out even closer I don't think there is evidence of one version of Windows being better.

Regardless of the OS version, though, turning off SMT (the lighter colored bars) resulted in a noticeable reduction in processing time! Its not huge, but disabling SMT on the 3990X reliably increased performance in both Pix4D and RealityCapture by around 5 to 10%.

Does the version of Windows 10 Pro impact photogrammetry with the 3990X?

My findings in this round of testing contradicts what Anandtech posted in their launch-day article: as far as I can tell, there is no difference between using Windows 10 Pro or Windows 10 Pro for Workstations with AMD's TR 3990X for photogrammetry.

Does turning SMT on vs off with AMD’s TR 3990X affect photogrammetry?

Surprisingly, yes: turning SMT off on the Threadripper 3990X improved processing speeds in both Pix4D and RealityCapture. Given our past experience with Metashape, I am confident that it would help there as well. However, please note that the 3990X is not the most cost-effective processor for these programs: the lower core count Threadrippers and the Ryzen 9 3950X offer better value.

Between this data, and our other articles looking at the same situation in Adobe CC programs and CPU-based rendering, it seems that something else must have been throwing off the performance measurements that Anandtech took. Other review websites, and indeed AMD themselves, have also come out with similar conclusions. This is a great example of why testing by multiple sources is important!