AMD has launched a new top-end CPU, equipped with a whopping 64 cores: the Threadripper 3990X. We have put this new chip to the test in a wide range of applications, from photography to rendering, but this article is looking specifically at RealityCapture. Keep reading to find out how the 3990X stacks up against other Threadripper models as well as some of Intel and AMD's various desktop processors. 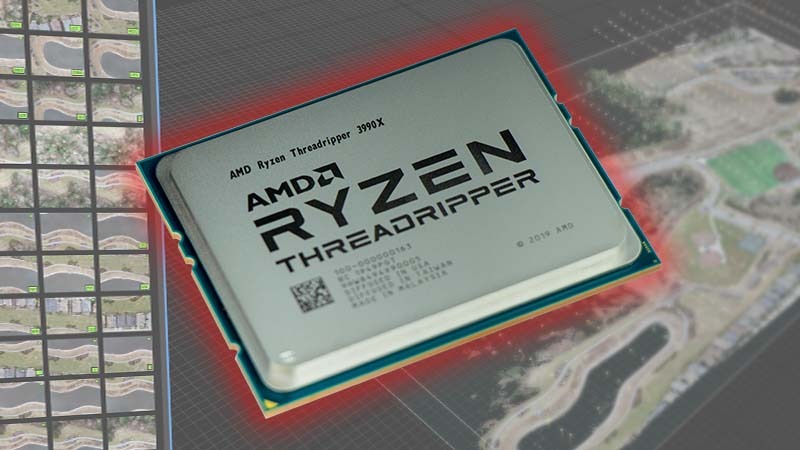 For this article, we are primarily interested in how this new AMD Threadripper 3990X compares to other current-generation processors. The focus is on photogrammetry processing in RealityCapture, using a benchmark tool we developed here at Puget Systems. More info about this utility is available in the Benchmark Details.

Additionally, it is worth pointing out that the CPU cooler we used for testing the new TR 3990X is somewhat borderline for how much heat this processor can potentially put out. In the systems we build with this chip going forward, we will be utilizing a larger heatsink and fan to ensure maximum performance even under extended loads – but in the open-air testbeds we use here in our lab, we found that the cooler we used did not lead to throttling.​

For testing photogrammetry applications, we have four image sets that we own the rights to – covering both smaller and larger size model and map projects. All of these image sets are available in our public RealityCapture benchmarks, split up to allow quick or extended tests, which you can download and run if you want to compare your system's performance to what we measured for this article. 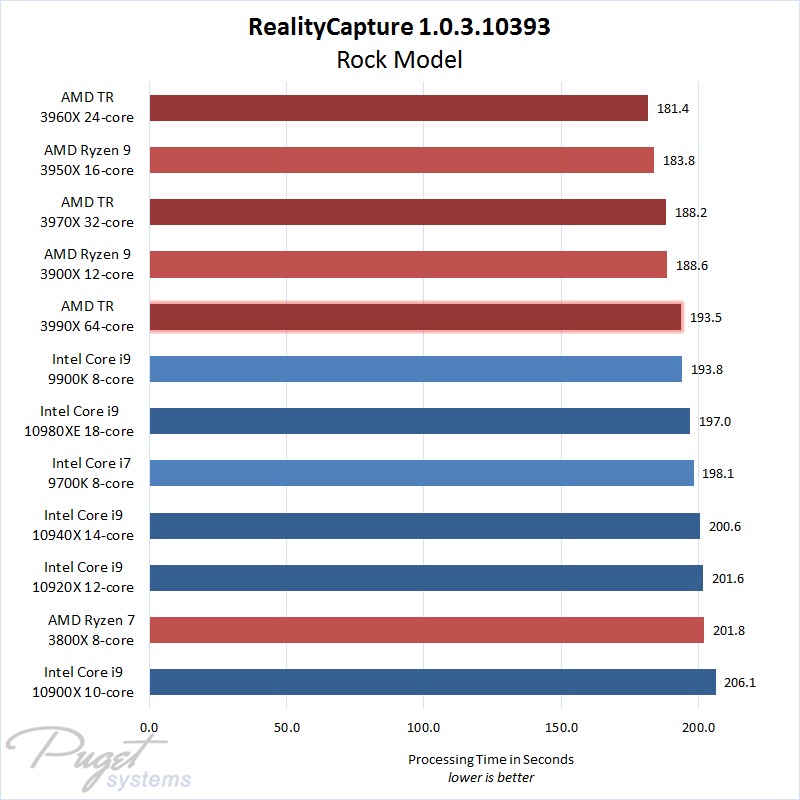 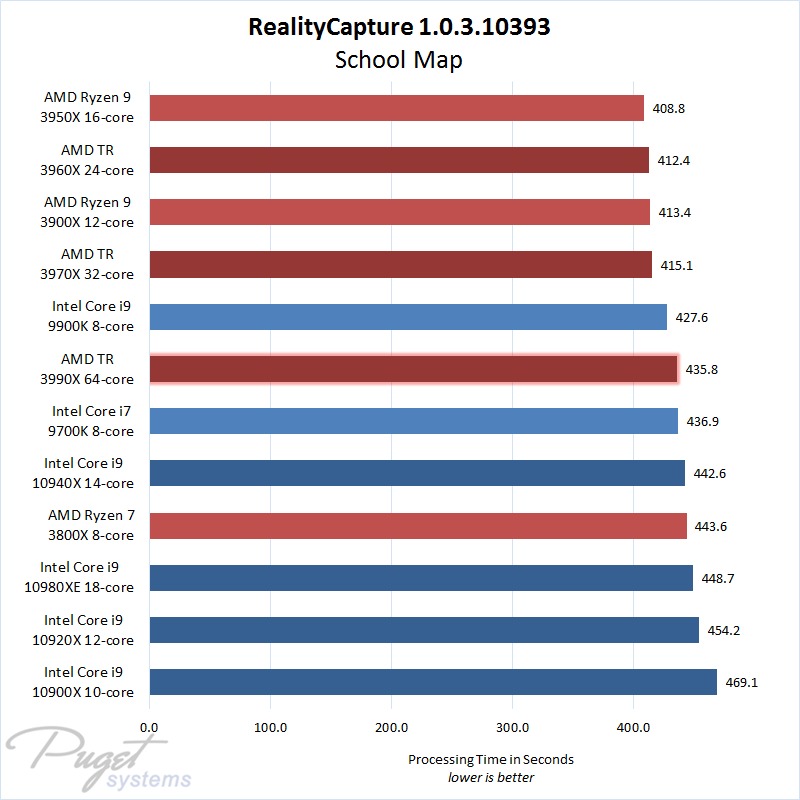 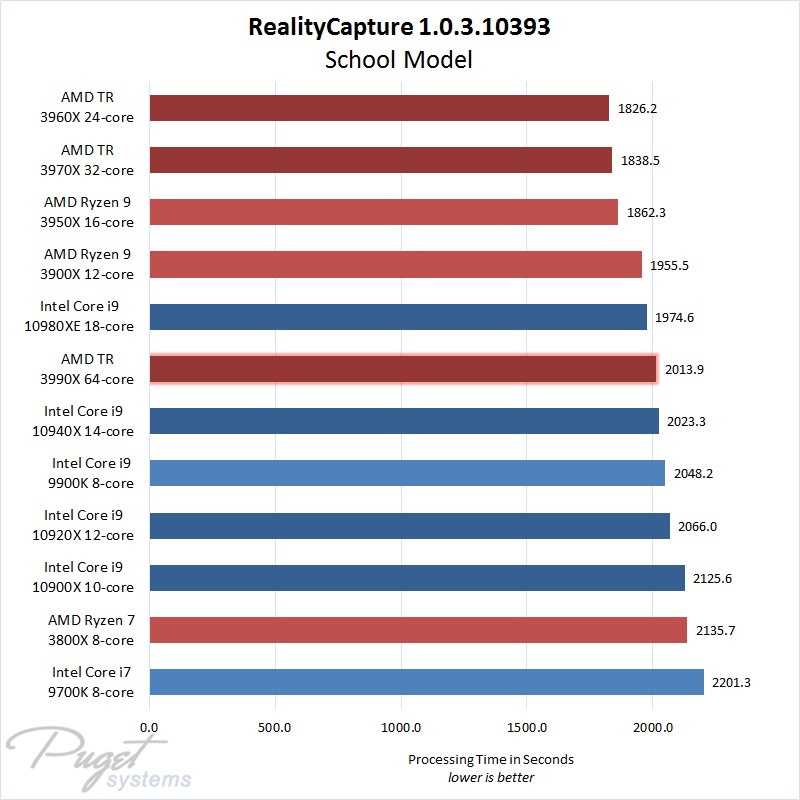 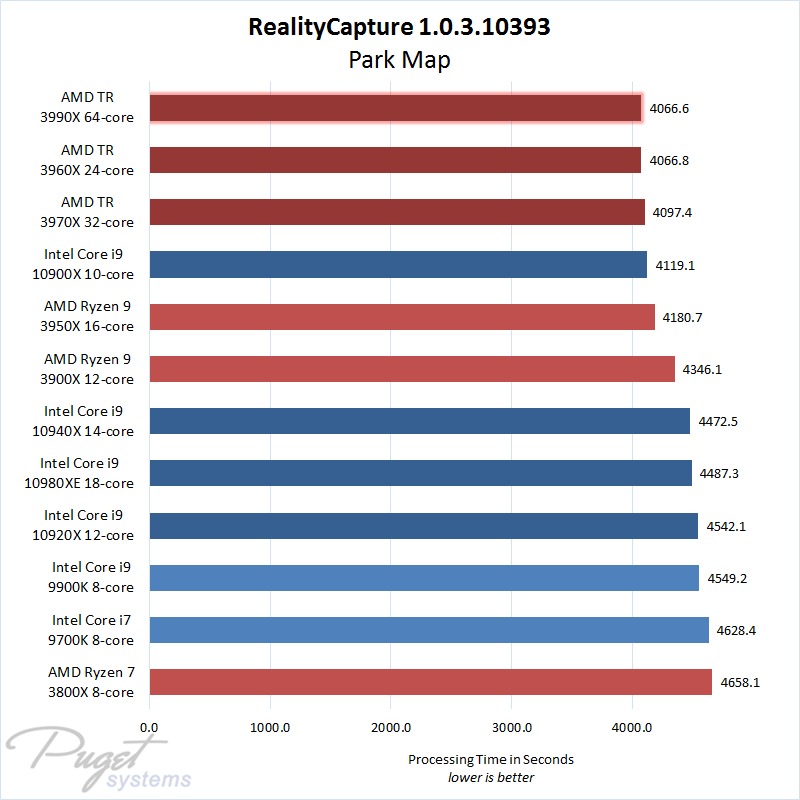 For those who want to dig into how each CPU performed in the various processing steps in RealityCapture, here is a full results table:

NOTE ABOUT THE DATA ABOVE: It was pointed out to me by an astute reader that there are a couple of incorrect data points in the chart above. Neither materially changes the conclusions below, but it is worth noting that on the Park Map data set the Threadripper 3990X ended up with a time ~300 seconds lower than it should have, due to the Align Images time being shorter than is truly possible, and the Core i9 10900X is ~500 seconds lower for a similar issue with the Ortho Projection step. I don't see any other glaring issues, and will be more watchful for this sort of thing in the future.

For the most part, AMD's new 64-core Threadripper 3990X performed in the middle of the pack – not a great result for such an expensive processor. It did manage to take top billing with our largest image set, but even there the 24-core 3960X was just as fast for less than half the price.

Looking at the overall results, there isn't a huge performance spread from even the slowest to fastest chips among those we tested: depending on the image set, only about 10-20% variance from the top to the bottom of the pack. That means going for the absolute fastest CPU isn't saving you a lot of time, and a better approach is probably to go for the most affordable of the top five or so. AMD's Ryzen 9 3950X consistently landed in that range, with the 3900X not far behind.

No, the 3990X is not a good fit for RealityCapture – especially considering its high price tag. AMD's more mainstream Ryzen 9 3950X and 3900X processors are a much better choice, offering similar or better performance in this application for a fraction of the cost.