Skip to content
Always look at the date when you read an article. Some of the content in this article is most likely out of date, as it was written on September 6, 2016. For newer information, see Adobe Premiere Pro CC 2015.3 CPU Comparison

When configuring a workstation for Premiere Pro, there is a huge variety of components that you need to choose from. Everything from what CPU and video card to the number and speed of drives you need should be taken into consideration. In this article, we will be tackling the question of what CPU you need by looking at six different CPU options that you might consider in a workstation. These CPUs cover the highest end model from the standard Core i7 line, three of the "High End Desktop" Intel CPUs, and a pair of dual Xeon configurations with up to 28 physical cores.

In this article, we will be focusing on two primary tasks: exporting and rendering previews. If you want to skip over our individual benchmark results and simply view our conclusions, feel free to jump ahead to the conclusion section.

To benchmark Premiere Pro, we used the following configurations:

These test configurations include three different platforms along with six different CPU models. For Premiere Pro, we typically would recommend a CPU choice that has a moderate number of cores (between 6 and 12 cores) along with a fairly high frequency. However, to ensure that we are thorough in our testing we will also be including a Core i7 6700K (which only has four cores and is limited to 64GB max, but has extremely good single-threaded performance) and a high core count dual CPU setup. While our multi core performance testing has made it very clear that there likely is no benefit to using a dual CPU configuration with a high number of cores, this will let us show how much performance you may be giving up if you happen to already have a high core count dual CPU workstation or if you need/want a dual CPU workstation due to other applications you use in your workflow.

To help with consistency – and since the benchmarks we performed ran for several days – we programmed a custom script using AutoIt to start Premiere Pro, load the relevant project, time how long it takes to export the timeline with the appropriate settings or generate previews, close Premiere Pro to clear any data from the system RAM, then loop while changing the project file.

In order to make our testing as accurate as possible, we used relatively simple timelines for our testing. In the past, we've loaded on the accelerated effects to show the maximum difference between configurations, but we found that this was not representative of typical real-world performance. Our test timelines consisted of: 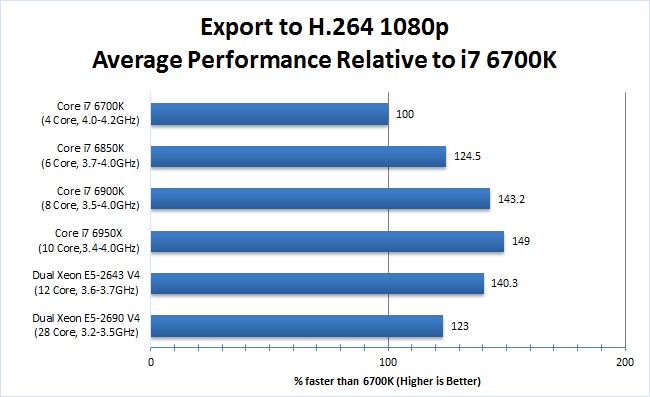 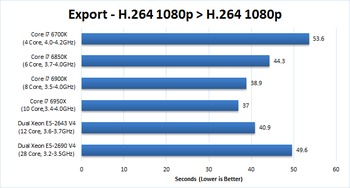 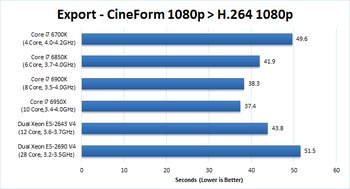 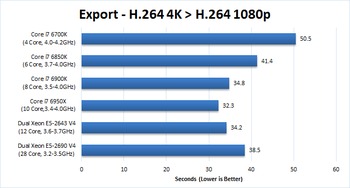 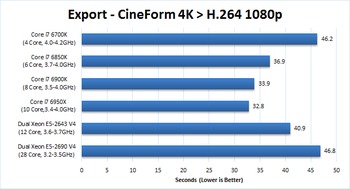 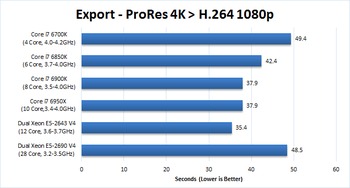 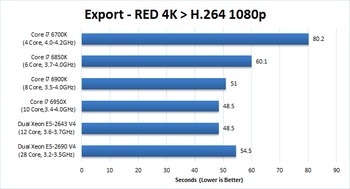 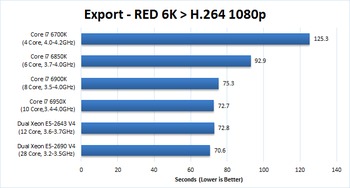 While the individual results varyied from test to test, compared to the testing we have done for other applications like After Effects, there is a remarkable amount of consistency. Nearly across the board, the Intel Core i7 6950X was the top performer, with the only exception being "ProRes 4K > H.264 1080p" where the dual Xeon E5-2643 V3 was about 7% faster. However, for every other test the i7 6950X was anywhere from the same performance as the dual E5-2643 V4 to almost 25% faster.

Overall, we would say that there is little reason to us a dual Xeon configuration for exporting to 1080p in Premiere Pro. If you only work with ProRes footage there may be an argument for it, but since PP 2015 is the first version with native Quicktime support there is no way to know if this is simply a fluke or something that will be true in future versions of Premiere as well. 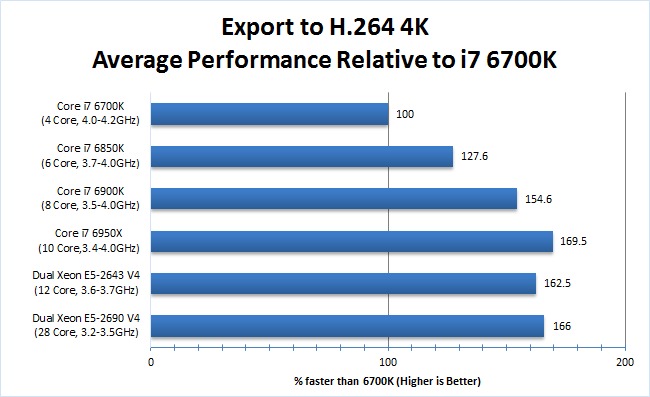 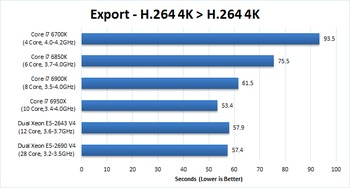 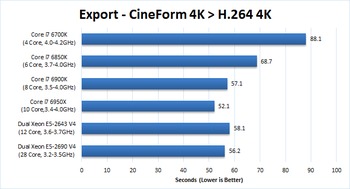 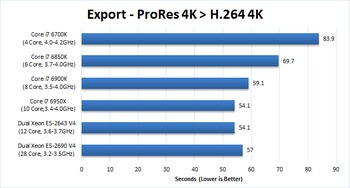 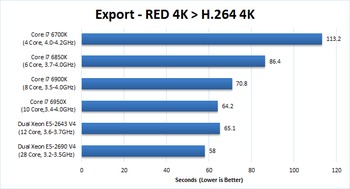 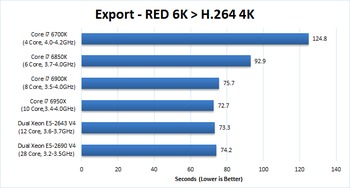 We always like to see consistent results, so we were very pleased with what we saw when exporting to H.264 4K. Compared to our 1080p testing, the exact results changed a bit (the higher core count CPUs performed a bit better) but it is good to see that the best overall CPU for exporting to 1080p is the same as the best CPU for exporting to 4K.

While higher core count CPUs did better in this round of testing, there still is little use to a dual Xeon configuration. The dual Xeon E5-2690 V4 was about 10% faster when exporting RED 4K to H.264 4K, but that is the only time a dual CPU configuration was faster than a single CPU. And since you would be paying between two and three times the cost for a E5-2690 V4 system that is a bit better for one thing, but much worse for everything else, that is likely not a good option for most users – even if they primarily work with RED 4K footage. 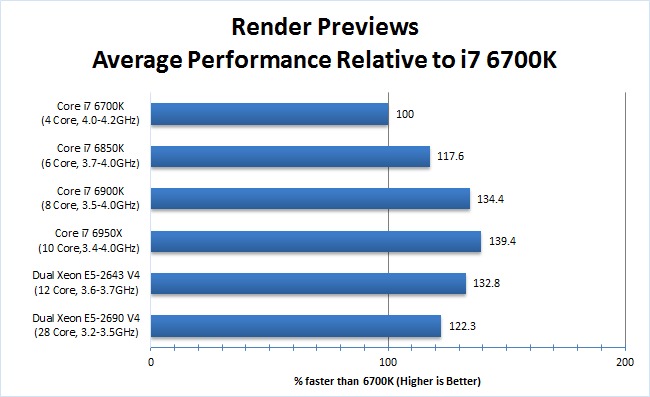 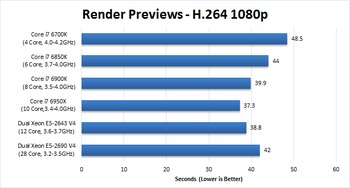 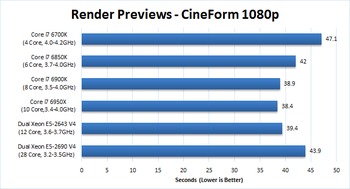 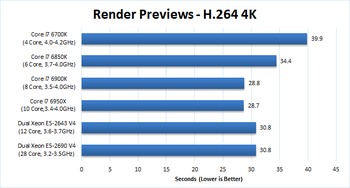 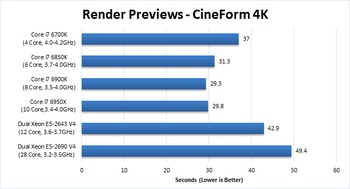 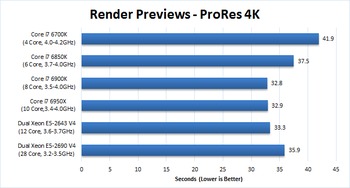 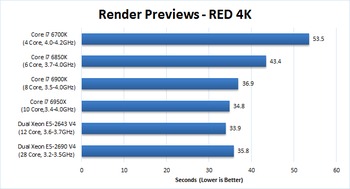 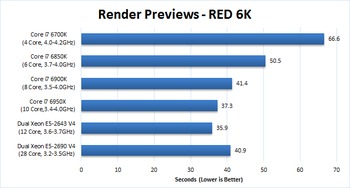 Our final round of testing – rendering previews – is not only a good test for previews, but also an indication of how well each CPU is able to scrub the timeline live. We still have not found a reliable way to test scrubbing directly (recording the amount of dropped frames is widely inconsistent between runs), but this is still a decent way to measure the performance difference when scrubbing in addition to how fast each CPU can render previews.

While the end results are pretty similar to what we saw when exporting to 1080p or 4K, the higher end Core i7 CPUs actually saw slightly smaller amounts of performance gains in this testing than they did when rendering. There is still a decent increase using the i7 6850K compared to the i7 6700K (about 17%), but we only saw an additional 15% when upgrading to a i7 6900K, and only another 3.5% when upgrading to a i7 6950X.

Similar to the rest of our testing, the dual CPU configurations were overall much worse than the best single CPU option, although there was still a couple of times that they were faster. This time, the dual Xeon E5-2643 V4 was a bit faster when generating previews for RED 4K and RED 6K footage, but only by 3-4%.

It is fairly rare that the results of our testing is consistent across the different tasks we benchmark, but Premiere Pro appears to be one of those programs where it thankfully is the case. In fact, the results are close enough that we are comfortable averaging all the results together to give you a "overall performance" chart that we feel should be relatively accurate: 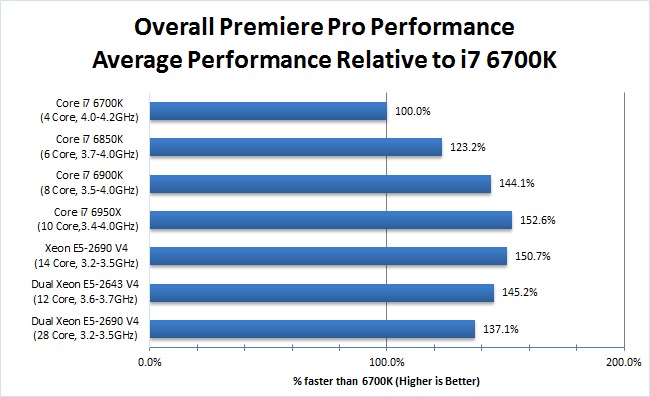 If you only work with one type of footage that we happened to test, we highly recommend looking at that specific testing result to determine which CPU would be best for you. However, based on our testing overall, we can make a general recommendation for what CPU you should use in a Premiere Pro workstation: 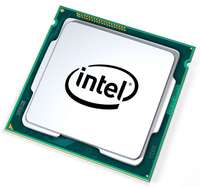 For an entry level Premiere Pro workstation, we would recommend using an Intel Core i7 6850K. It gives great performance when you are on a bit of a budget, but doesn't sacrifice a huge amount of performance compared to the higher end options (only 16-22% on average). If your budget allows, the Intel Core i7 6900K is an excellent value giving you up to 24% higher performance compared to the i7 6850K depending on the specific task. This difference in performance is most obvious when exporting to higher resolutions like 4K, however, so if you only work with 1080p footage the difference in performance will be closer to ~10% rather than 24%. For the best possible performance, the Intel Core i7 6950X is an excellent choice. This CPU was the fastest (or a very close second) in nearly all of our tests and while it is only 5% faster on average compared to the i7 6900K, if you need the best, this is it.

You will notice that we didn't even include a dual CPU configuration in our list of recommended CPUs. Frankly, Premiere Pro simply is not capable of taking advantage of the larger number of cores available in a dual CPU configuration. At best, they were slightly faster than the single CPU options, but mostly they performed either the same or slower. Some of that is likely due to Adobe's recent focus on GPU acceleration (which should yield much higher performance gains for the majority of users), but whatever the reason, dual CPUs simply don't make sense for the majority of users.

One last thing we will note is that these results are only completely accurate for Premiere Pro 2015.3. We've seen fairly wide shifts in what CPU is best for Premiere in the past, so if you are still using CS6 or a different older version, this testing may not be be representative of what you would see.