In version 1.7.0, Agisoft appears to have fixed whatever was holding back the performance of AMD's Radeon video cards. Now, both the GeForce RTX 30 Series and Radeon RX 6000 Series cards give great results, and overall the processing times are slightly better compared to 1.6.5 (except for in our smallest project, which was a little slower). If you are using an AMD video card, you will definitely want to update to the newest version - and unless you work exclusively on small jobs with fewer than 50 photos, NVIDIA based systems will see a boost with Metashape 1.7.0 as well.

We just published a big GPU roundup for Metashape 1.6.5, covering all of the GeForce RTX 30 Series and Radeon RX 6000 Series video cards that have been released so far, but while we were waiting on a 6900 XT to test, the folks at Agisoft launched a new version of Metashape: 1.7.0. It had been in beta for a while, but was fully released on New Years Eve. So, after publishing our 1.6.5 results, we turned around and immediately began testing the new version to see if performance has changed. Read on to see what we discovered! 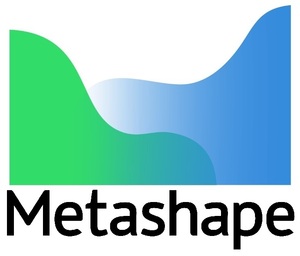 Unfortunately, we had to send back the samples of AMD's Radeon RX 6800 and 6800 XT we had borrowed for our previous round of testing. Because of how significant the results we found with the Radeon RX 6900 XT were, though, we wanted to get this article out to the public as quickly as possible - so we only tested on NVIDIA's GeForce RTX 3080 and 3090 (closest models in price to the 6900 XT).

* Please note that we ran AMD's Ryzen 9 5950X processor at stock settings for this testing, but we have found that even better performance is available from this CPU (and other high core count models) by turning SMT off.

Special thanks to our friends at Linus Media Group for loaning us their Radeon RX 6900 XT! We promise to return it soon...

Here is a gallery of charts showing the overall per-project performance of the cards we tested on each version of Metashape, with the older 1.6.5 shown in blue and the recently-launched 1.7.0 in green. Times are in seconds, so lower numbers / shorted bars are better:

In a recent roundup article, mentioned in the intro, our conclusion had been that AMD video cards were not well suited to Metashape 1.6.5 - in particular, due to poor performance in the Build Depth Maps step. We suggested that "better optimization of Metashape for AMD cards, especially in the Build Depth Maps step, might be able to improve their performance in the future" - and that is exactly what has happened in version 1.7.0!

Processing times on AMD's Radeon RX 6900 XT are now right in line with the NVIDIA GeForce RTX 3080 and 3090, which are priced on either side of the Radeon model, and in three of the four image sets the processing times for those cards came down slightly as well. Only on our smallest test, the 36 image Rock Model, was performance in the new version of Metashape slower than before.

Oddly, processing times without a dedicated GPU being used (which can be achieved by unselecting all GPUs in Preferences) were *far* slower in 1.7.0 than in version 1.6.5 - but this application has always been painfully slow without a video card, so we would never have recommended running it that way to begin with.

For those who are interested in further details, here is a table showing the processing times of individual steps within each project: 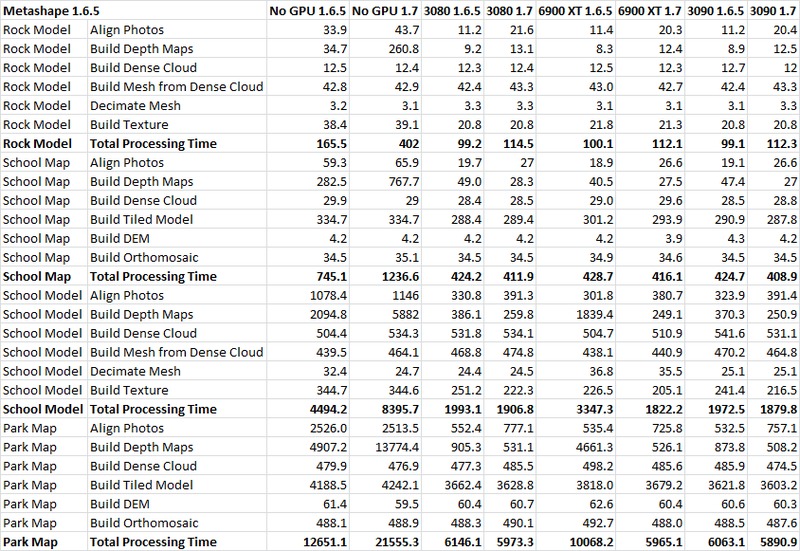 Looking over the table above, we can highlight a few interesting differences between how version 1.7.0 and the older 1.6.5 perform:

Yes - as was the case in version 1.6.5, the GeForce RTX 30 Series cards we tested did quite well in Metashape 1.7.0. We weren't able to test the lower-end 3070 and 3060 Ti for this article, or multi-GPU performance, due to time constraints - but from what we can tell, all of these cards should be just fine for Metashape. It is also still likely that pairing up two of these cards increases processing speed even further, by around 5-10%, such that dual RTX 3070 cards would outperform a single RTX 3090 for less money!

Yes - performance on these cards is dramatically improved from version 1.6.5, and they should now be in line with comparably priced NVIDIA cards. We no longer have a Radeon RX 6800 or 6800 XT on hand to test, but the 6900 XT's result should be emblematic of what you can expect with the RX 6000 Series as a whole. We still do not plan to carry them here at Puget Systems, due to poor experiences in the past with driver stability, but if you are an AMD fan there is now no reason not to get one for use in Metashape 1.7.0!