Note: If you are looking for results using the RTX 2070 8GB model, we have a follow-up article available: DaVinci Resolve 15: NVIDIA GeForce RTX 2070 Performance

In many ways, DaVinci Resolve is the poster child for how video editing applications should leverage the power of the GPU. While other core components like the CPU are certainly important, if you want the best FPS possible while color grading, a significant portion of your workstation budget will likely be spent on either a single powerful GPU or multiple GPUs.

NVIDIA's new RTX series cards are especially interesting since not only should they perform extremely well from the get-go, DaVinci Resolve is listed as already implementing (or planning to implement) the new features found on the RTX platform by using "Turing Tensor Cores in Resolve 15 to accelerate AI inferencing for graphics enhancement". This is a fairly generic bit of text, and it really only makes sense if you understand the two major new features found in these RTX cards: Tensor cores and RT cores.

While already available on the more expensive Titan V GPU, the RTX line introduces tensor cores at a more reasonable price point. These tensor cores operate alongside the normal CUDA cores that traditionally do the heavy lifting, but are designed specifically for machine learning inference (running already created and trained machine learning models). Blackmagic has already announced that they will be using these cores, but exactly how they do so and where exactly it will improve performance is still to be seen.

RT cores are brand new in this generation of graphics cards, and are specialized for a single type of operation: ray tracing. It is possible that Blackmagic may utilize these cores for ray tracing in the Fusion tab, but if or when they will take advantage of these RT cores is currently unknown. 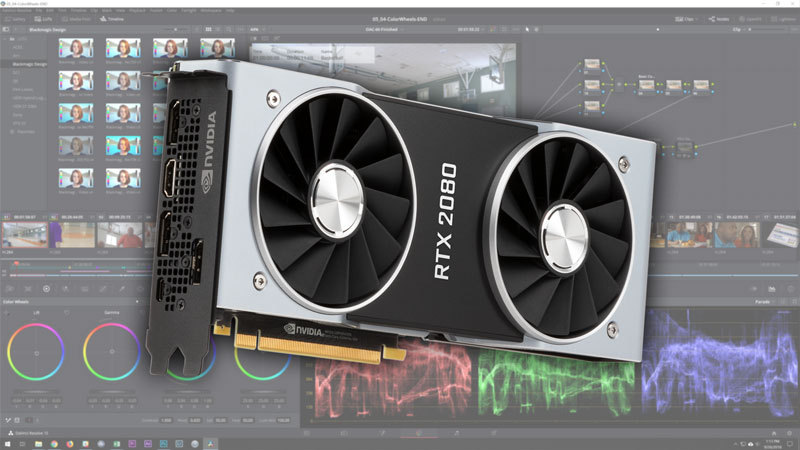 To see how the new RTX cards perform in DaVinci Resolve, we tested it against a selection of cards from NVIDIA as well as AMD's Vega 64 GPU.

To analyze our benchmark results, we are going to break it down based the three different levels of color grading we tested. The easiest - a basic grade with 4 power windows - is not too difficult and every GPU we tested should be able to give full playback FPS in everything but RED 8K (Full Res Premium). However, each level up should show more and more of a difference between the different cards. 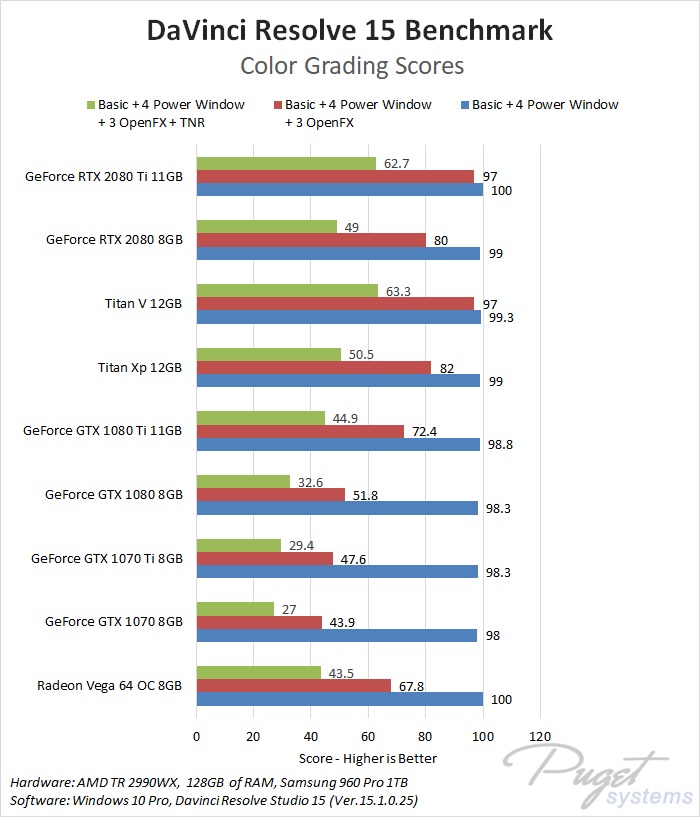 While GPU pricing has been especially volatile recently, the best way to evaluate the new RTX cards is to compare them against the similarly priced NVIDIA cards from the previous generation. This isn't a perfect comparison since the older cards give you more VRAM at each price point, but when looking at performance it should be close enough to give us an idea of how these cards perform.

Starting with the RTX 2080, it comes in at a decent 10% faster than the GTX 1080 Ti which puts it right on par with the more expensive Titan Xp video card. 10% isn't anything groundbreaking, but combined with the new Tensor cores which gives the card even more potential for the future makes it an easy pick over the GTX 1080 Ti unless you really need that extra 3GB of VRAM.

The RTX 2080 Ti, however, is much more impressive. With that card, we saw a 20-25% performance gain over the Titan Xp. This puts it right in line with the Titan V which is more than twice the cost! 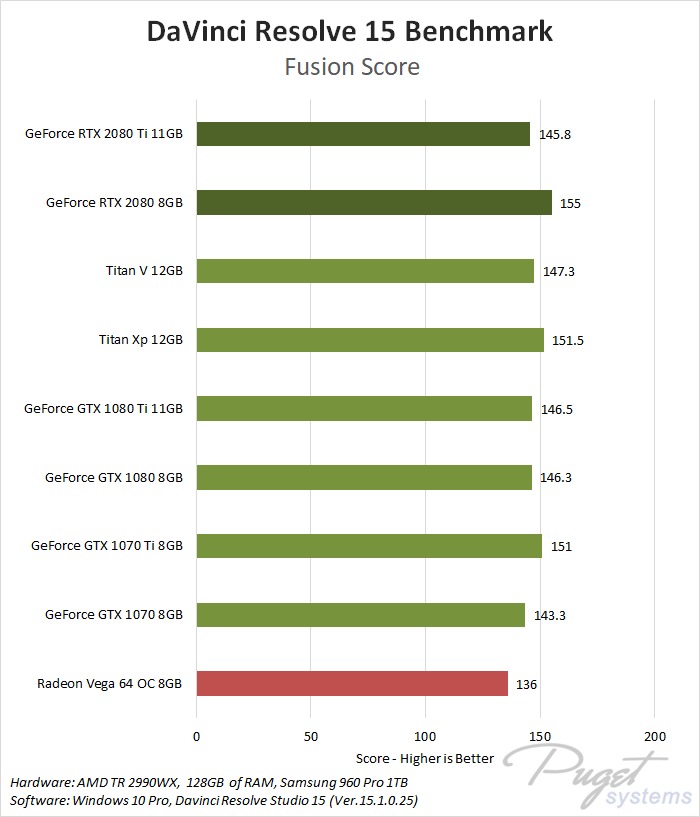 Fusion is relatively new to our DaVinci Resolve testing, and so far we haven't been too impressed with how well it takes advantage of the GPU. To be fair, we are not using media footage in these projects that is particularly difficult to process, but given the FPS we saw in each project we doubt that that having multiple GPUs would significantly improve performance even if you are using 8K RED media.

Whether it is due to our test projects or simply how much more CPU dependent Fusion is, we really didn't see much of a difference with any of the cards we tested. However, we will again point out the future potential of the RTX cards for Fusion. The new RT cores in particular could be very interesting and while we have no idea if/when they will be used, it is certainly something to keep in mind.

We have done a number of articles looking at GPU scaling in the past, and while we don't expect thing to change much with the RTX cards, we decided to go ahead and test it anyway. Unfortunately, we did not have access to multiple RTX 2080 Ti cards at the time of this article, but even with just the 2080 we should still be able to get a great idea of whether things are the same or if the RTX somehow behaves differently than we expect. 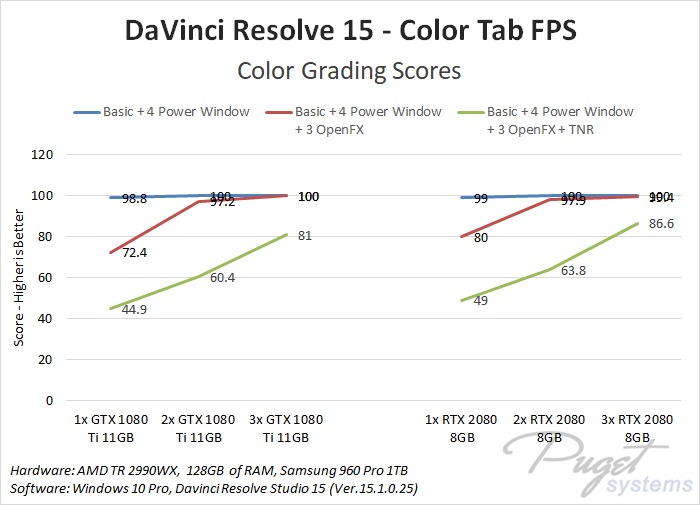 Starting with the Color tab, the results with the RTX 2080 line up almost exactly with the GTX 1080 Ti. The 2080 is of course a bit faster, but the scaling itself is almost identical. While we did not test up to four GPUs, it is pretty clear that two of these RTX cards should be more than adequate for most users, or three if you do especially intensive grading. 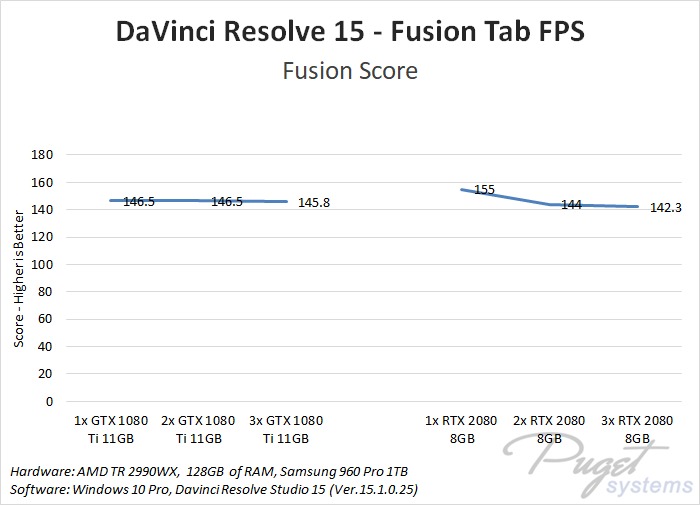 Like we stated in the previous section, at the moment Fusion isn't terrific at leveraging the video card and it shows in our multi-GPU testing. In fact, we saw a slight drop in performance when we used multiple RTX cards. It isn't enough to really be too concerned about (will you really notice a fraction of an FPS?), but it does show that if you care about performance in Fusion, adding more GPUs isn't the way to go right now.

Are the RTX video cards good for DaVinci Resolve? 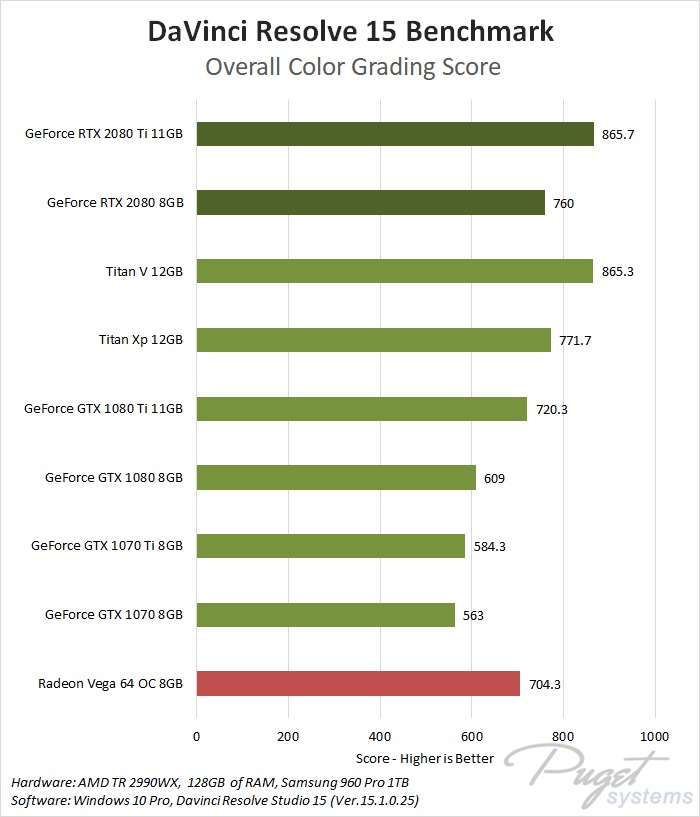 GPU pricing has been especially volatile recently, but the best way to evaluate the new RTX cards is to compare them against the similarly priced NVIDIA cards from the previous generation. This isn't a perfect comparison since the older cards give you more VRAM at each price point, but when looking at performance it should be close enough to give us an idea of how these cards perform.

While not massively faster, the RTX 2080 does give a very respectable 10% performance increase over the GTX 1080 Ti in the Color tab. This puts it about on par with the more expensive Titan Xp video card, although the 8GB of VRAM may be slightly limiting for those working with 8K footage and multiple high resolution displays.

Depending on the level of grading you are doing, the RTX 2080 Ti is up to 25% faster than the Titan Xp or about 30% faster than the RTX 2080 which puts it in line with the much more expensive Titan V video card. Due to how Resolve scales with multiple GPUs, a single RTX 2080 Ti is also almost exactly the same performance as a pair of RTX 2080 or GTX 1080 Ti cards making it a great value even at its relatively high cost.

There isn't really much mystery here, the RTX cards are simply really good for DaVinci Resolve. Especially if you consider the fact that Blackmagic has already stated that they will be taking advantage of the Tensor cores in Resolve 15, it makes these cards incredibly attractive for use in a color grading workstation. However, not everything is perfect and there is one big issue that you may have to work around: the cooler most RTX cards use.

To put it bluntly, the style of cooler used on the reference cards from NVIDIA and most 3rd party manufacturers is not good for multi-GPU configurations. They can be excellent for a single GPU, but if you want two or more cards the design is sub-optimal. The issue is that the cooler does not exhaust out the back of the system so the hot air generated by the cards is simply recycled inside the system over and over. We didn't see a significant performance drop in our Resolve testing, but we are also testing in an ideal environment with relatively short clips. In GPU-heavy applications like OctaneRender and Redshift, however, we have seen up to a 30% performance drop over time using multiple reference RTX cards. This doesn't mean you cannot use the RTX cards in multi-GPU configurations, but rather that you should try to use cards with a "blower" style cooler that is designed to vent the heat directly outside of the chassis.