At Puget Systems, we pride ourselves in building some of the quietest PCs in the industry.  At the same time, we build high-performance computers, and designing a computer to be both can be a delicate balance.  Passively cooled video cards are essential to an ultra-quiet computer, and the Gigabyte Silent-Cell video have no fans or moving parts.  This seemed to be perfectly suited for our Serenity PC, which has been consistently reviewed as one of the quietest PCs you'll ever hear.  We were excited to get these video cards in hand for testing, anticipating no problems because we had successfully used other passively cooled video cards from GigaByte in the past.

The Gigabyte GV-R677SL-1GD is cooled with what Gigabyte calls their "silent-cell" technology. Their description of this technology includes:

"GIGABYTE rewrites the history of silent cooling to perfect the thermal performance, introducing the state-of-the-art Silent-Cell™ Cooling Technology which adopts a series of crimping layered fins with Aluminum nodes. Thanks to proprietary cell-division thermal architecture and ultra-huge pure copper base with 3 heat pipes, Slient-Cell™ [sic] are able to cool down the GPU up to 18°C more than by using an active fan cooling design. In addition, Silent-Cell cooler module utilizes the precision process to deliver zero-interval combination between heat pipe and fins, enhancing the overall cooling capability without any compromise from its material characteristic."

One look at the heatsinks on these video cards, and I agree. Gigabyte does a great job using manufacturing quality to solve thermal issues.  Many times, manufacturers will take a "bigger is better" approach to cooling, making the heatsinks so massive that the video card cannot support its own weight when installed in your PC.  We've seen PCI slots literally ripped off the motherboard by some of these massive cards.  It is more than just a problem when shipping or moving your PC.  Over time, these cards can sag to a lethal degree, causing video POST issues, or worse.

In contrast, Gigabyte does a great job keeping the mass of their heatsinks in check.  Instead they've made sure the fin density and orientation are optimized for a low airflow chassis.  The fin spacing is wide, allowing slow moving air to penetrate into the heatsink.  The fins are parallel to the card, making it easy to cool with a slow spinning front intake fan on your chassis.  In terms of design, these cards are great.

Note that on the description of their Silent-Cell technology, they are careful to focus on the thermal performance of these cards, not on the noise level.  They IMPLY silence with almost every other breath, but do not come out and say it.  This is important...file that away and we'll talk about it later.

We can quickly see that in nearly all our tests, the PowerColor 5750 and GigaByte 6750 are neck and neck, with the GigaByte 6770 pulling a lead of about 15%.

Of course, performance is only half of the equation.  In a quiet, low airflow PC, the temperature on the video card is often a critical issue, as the faster the card the more difficult the heat is to control.  For example, we did extensive testing on the PowerColor 6850 passively cooled video card, and found that it was impossible to properly cool without a dedicated chassis fan nearby, which largely negates the point of having a passively cooled video card.  We've shown above that the 6770 is faster than the 5750 and 6750.  Let's take a look at the temperature logs for each card:

In the graphs above, you see the system run through our entire benchmark process.  The video card temperature you see sustained through the first half is during our gaming benchmarks.  The large spike on the CPU and video cards at the beginning and 75% of the way through is when we run both Prime95 and Furmark.  This is extreme system load, beyond what any typical user would ever put on the system.  Afterward we move on to more CPU based benchmarks, so you see the video cards begin to cool down.

So what do we find?  We see a slight impact on the CPU temperatures, but nothing that is cause for alarm.  On the video card itself, we see extremely similar results on the 5750 and 6750.  The 6770 shows a 10C jump under maximum load, but is only 1-2C higher at idle and under typical gaming load.  Not bad!

Of course, all of these temperatures on the video card are higher than you'd like to see in day to day use.  These are worst-case temperatures, using utilities specifically designed to put load on the components and generate as much heat as possible.  At Puget Systems we like to see video cards endure these tests with temperatures under 80C, but we make allowances with our silent systems, depending on expected usage and environment.  Under those criteria, the GigaByte 6770 is looking good!

This is where things start to go sideways for GigaByte.  We've been using the PowerColor 5750 for years, and we are accustomed to the card performing silently under idle and load conditions. We expect the same from any passively cooled card.  However, with both GigaByte cards, we experienced a distinct "tick" from the card that occurred every time a frame was rendered under heavy load.  You would think that a passively cooled video card would have no way to make noise, but when you enter the realm of ultra-quiet computing, you quickly find that electrical noise is in fact audible, and can be a problem.

This electrical noise from the GigaByte cards occurred only under load, but was easily the loudest component in our Serenity PC, leading us to determine that it was not acceptable for Serenity line.  In the video below, we will show you each video card at idle and under load. You can hear that the problem is non-existent in the PowerColor 5750, but is perceptible with the GigaByte 6750 under load and even more of a problem with the GigaBye 6770 under load.

Use quality speakers or headphones when viewing the video below.  Cheap headphones will not do it justice. You may need to turn up your speakers to hear these noises.  There are no loud segments to surprise you, we promise!

By the way, if the noises are too quiet for you to hear, you must need a Serenity PC! Shameless, I know.

At first, we assumed (or hoped) this to be a problem with our particular cards, or maybe a batch issue.  In working with GigaByte, they were able to replicate the issue, which meant it was a design problem (which is not as easily solved). We continued to wait, hoping to get word that a driver update, firmware fix, or BOM update would solve the issue. After all, why build a "silent" video card that isn't silent?  Unfortunately, the word back from GigaByte was that the noise levels were acceptable and would not be addressed. 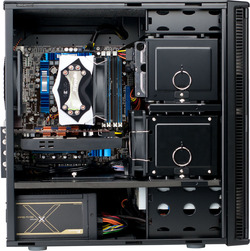 In our experience, words describing noise levels are notoriously subjective. "Quiet" and "silent" are just words...what do they mean?  To us, the word "silent" should be reserved for a special class of components.  At Puget Systems, we will only use the word "silent" if the item can not be heard by the human ear from a normal user position.  If we start throwing around the word "silent" where it is not earned, we immediately lose credibility. When "silent" is not silent, then you are dealing with a "hype" word, not an accurate product description.

Is the Gigabyte 6770 Silent Series a quiet video card? Yes.  You can use this video card to make a very quiet computer system.  Is it quiet enough for use in the Puget Systems Serenity?  Absolutely not. If we were to use this video card in our Serenity systems, it would be much louder than the rest of the system combined.

We completely understand that here at Puget Systems, we are extreme when it comes to making quiet computers.  However, if GigaByte is going to call something silent, we think it should be silent.  At Puget Systems, we feel one of our responsibilities is to hold the manufacturers accountable to their claims, and in this situation, we feel the GigaByte description of Silent-Cell is misleading to the consumer.