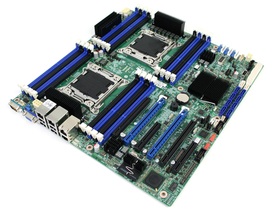 The Intel S2600COE is a part of the recently launched Romley platform and is intended exclusively for use in server systems. We have been very happy with the Asus Z9PE-D8 WS, but there are times when the workstation features of that type of motherboard are not wanted in a server system. If a feature is not necessary in a server environment, it is often preferred for it to simply not exist on the motherboard at all so that there are fewer components to potentially cause problems. The other advantage of this motherboard is that it allows for 16 sticks of DDR3 ECC RAM to be installed and used, versus the 8 sticks available on the Asus Z9PE-D8 WS. 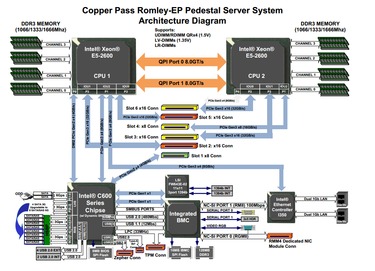 As is the norm on server motherboards, the BIOS options are fairly limited. The RAM configuration is very basic, allowing you to set the frequency, but not timings or voltage. Of the onboard devices, you can enable/disable the SATA controller, onboard video, LAN ports, serial ports, and the USB controller.

The BIOS has a few options for controlling the fan headers, but they are altitude-based and do very little in the way of actually throttling the CPU fans. On this motherboard, you should not expect the fans to ramp to more than 10-15% of their maximum RPMs. As is true on most server motherboards, this board is designed to keep the CPUs running as cool as possible with only a small consideration for noise levels.

This motherboard does not support profiles and has no GUI-based method of updating the BIOS. Updating the BIOS is done through the EFI shell and even without a GUI is straight-forward, if a bit confusing for those not familiar with EFI shells. There are five steps to update the BIOS:

Starting at the top, there are four external USB 2.0 ports and only a single internal USB 2.0 header. There are no USB 3.0 ports as well as no onboard audio device. If either functionality is desired, an add-on card must be installed.

There are two SATA 6Gb/s ports, and eight SATA 3Gb/s ports. All ten of these ports support hot-swap as long as the Intel RSTe software is installed, but one very important thing to note is that only four of the SATA 3Gb/s ports are active unless you purchase and install an Intel RAID C600 Upgrade Key. These Upgrade Keys unlock additional RAID levels and/or allow the ports to function as SAS ports. Depending on the RAID levels needed, these keys range from being fairly cheap to very expensive. We tested using a RKSATA8 Upgrade Key and beyond the physical installation of the key itself, there was no additional setup needed to activate the additional 4 SATA ports.

For networking, there are an impressive four gigabit Intel LAN ports on the rear I/O panel. Internally, there are two IEEE1394a firewire headers, although the motherboard does not come with a Firewire Bracket to allow external use of these ports. Finally, this motherboard includes a Matrox G200e onboard graphics adapter that can be used either through the Intel AXXRMM4LITE remote management module (purchased separately) or with the external VGA port. Note that if the onboard video is enabled, it becomes the primary display even if a more powerful discrete GPU is installed.

Moving on to the PCIe slots, here is a list and picture of the slots available on this motherboard:

After reviewing the layout of this motherboard, there are four issues we found that range from minor inconveniences to major issues. In the order of least to most problematic, they are:

The majority of the other checkpoints are designed to verify that the motherboard will function properly with a wide range of hardware. For that reason, we test using onboard video, Nvidia Geforce, AMD Radeon HD and Nvidia Quadro based video cards. We also test the motherboard with the largest quantity of RAM we can (16 x 8GB sticks), the fastest supported RAM currently offered by Puget Systems (DDR3-1333MHz) and since this is a server motherboard with 16 sticks of both ECC and non-ECC RAM.


Our testing not only found problems, but also confirmed a few very positive points of this motherboard. Like the Asus Z9PE D8-WS, the chipset on this board runs much, much cooler than on the previous generation of chipsets. In fact, even during our most intense testing, the chipset only hit 41° C. We also had absolutely no driver or BIOS issues at any point in our testing. Running 16 sticks of DDR3-1333 8GB RAM worked without any issues giving us a huge 128GB of usable onboard RAM.

We are used to working with server motherboards like the Intel S5520SC which, while technically a server board, still retains many desktop features such as onboard audio and S3 sleep. The Intel S2600COE completely departs from this and is as true a server motherboard as can be. What this means is that for a workstation-type computer, the Asus Z9PE D8-WS is likely a much better option than this motherboard.

There are still a few things that we don't like about this motherboard (the SATA 3Gb/s issues and the lack of a way to configure a RAID form the BIOS for example) but overall this motherboard is a great choice for a high-powered server system. Our list of problems are longer than we would normally allow on any product we carry, but many of the problems will not be an issue for a server system.