Read this article at https://www.pugetsystems.com/guides/1736

Written on April 29, 2020 by William George
Share:
Table of Contents

After wrapping up GPU testing in SOLIDWORKS earlier this year, I thought it would be worthwhile to run the same handful of Quadro video cards through their paces in other engineering applications. We don't yet have internal testing developed for other CAD or BIM programs, but there is a good test available for Revit called the RFO Benchmark. We've used it in the past to look at both CPU and GPU performance, and are doing so again for professional video cards in Revit 2020.2.

Puget Systems offers a range of workstations that are tailor-made for your unique workflow. Our goal is to provide the most effective and reliable system possible so you can concentrate on your work and not worry about your computer.

This platform is built around an Intel Core i7 9700K, with very high clock speeds, to avoid the CPU being a bottleneck in this testing. That processor gives great performance in modeling applications thanks to high clock speeds and a decent core count. More than enough RAM was included, to avoid that being a bottleneck of any kind, and a super-fast M.2 SSD was used for the same reason. For the video cards, we included most of the Quadro RTX line - except for the RTX 8000, which should perform the same as the RTX 6000 but with more VRAM - as well as the older Quadro P6000 and some of the lower-cost P-series models.

As mentioned in the introduction, we used the RFO Benchmark - specifically version 3.2 for the 2020 release of Revit. It offers multiple test modes, but since the focus of this article is on GPU performance we opted for the "Graphics Expanded" setting and used the "Total" time for each section as our datapoints. The tests were conducted at 3840x2160 resolution and 150% DPI scaling.

I usually like to include a screenshot of benchmarks we use, but with RFO Benchmark there isn't much to show - just results in a text file: 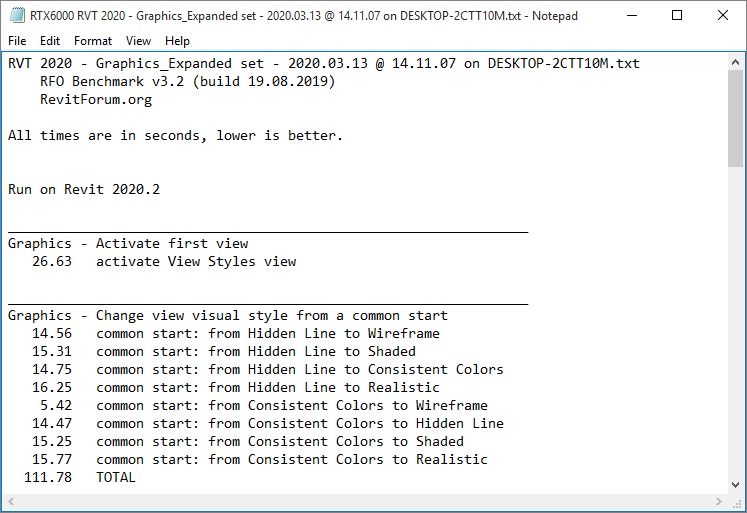 Here is a gallery showing the results from each section of this benchmark, in seconds, with the cards sorted from best performance at the top to worst at the bottom:

All of those charts tell pretty much the same story: these video cards, from the lowly Quadro P1000 to the expensive RTX 6000, all perform similarly. At the most extreme, there was about a 10% difference on the "Activate First View" result. Going up from the P1000 to the P2200 cuts that difference in half, and surprisingly that model came in second place in many of the other tests as well.

Based on the results above, I would recommend the Quadro P2200 as the best video card for most Revit 2020 users. It is a little faster than the P1000 without costing a lot more, and performed very well in all of the RFO Benchmark tests.

If you want something a little more powerful, and with newer features, the RTX 4000 is also a solid choice without breaking the bank. And of course, if you use other software alongside Revit, then make sure you select a card that will work well with all your applications. If you aren't sure how to reconcile the needs of different programs, please call or email our consultants for advice to your specific situation.

Looking for a Revit Workstation?

Puget Systems offers a range of workstations that are tailor-made for your unique workflow. Our goal is to provide the most effective and reliable system possible so you can concentrate on your work and not worry about your computer.