Skip to content
Always look at the date when you read an article. Some of the content in this article is most likely out of date, as it was written on May 15, 2018. For newer information, see our more recent articles.

Over the last few years, we have had more and more customers coming to us looking to make the move from Mac to PC. Whether they were unhappy that the Mac Pro hasn't been updated since 2013, upset because they feel like Apple has been ignoring the Content Creation community, or something else entirely, one of the biggest reasons they decided to switch was often due to the higher performance they could get out of a PC. After Effects is a very demanding application where higher performance can often result in a disproportionate rise in productivity. 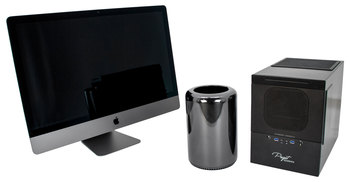 For this testing, we will be using two high-end iMac Pro systems and the old (but still current) Mac Pro alongside two of our PC workstations. Just as a warning, this article contains quite a few charts and lots and lots of benchmark numbers. If you don't like scrolling through this amount of data, we recommend skipping right to the Conclusion section.

To see how the iMac Pro and Mac Pro compare to our PC-based workstations, we will be testing the following system configurations:

To make our comparisons as realistic and fair as possible, we tried to keep the specs and pricing relatively similar between the Mac and PC systems. For example, we used a single 1TB NVMe drive on our workstations even though we would normally recommend multiple storage drives in order to have a dedicated drive for the cache files. Also, since the iMac systems come with a built-in display and force you to purchase a keyboard and mouse, we also added a quality monitor, keyboard, and mouse option to both the Mac Pro and to our workstation configurations. This works out to about a $1,000 price increase over the cost of the workstation itself, but we wanted to account for the additional cost of the accessories included with the iMacs. Of course, an exact price/performance comparison is going to depend on what monitor and peripheral you purchase – or if you need new ones at all. 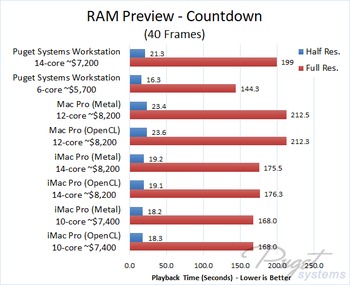 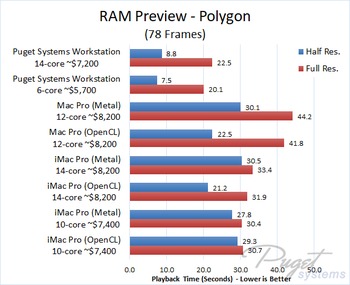 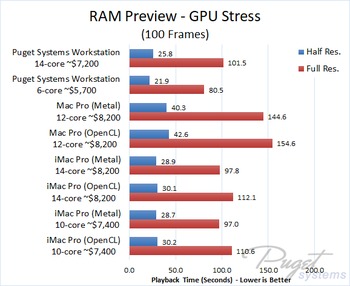 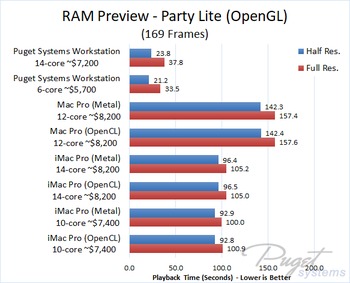 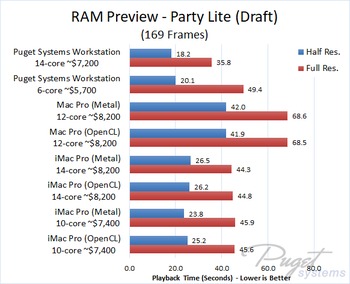 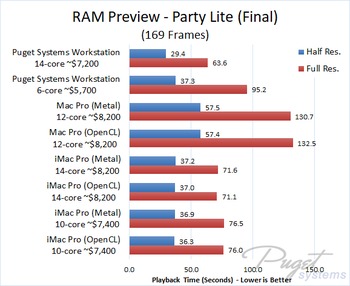 In addition, while we did our testing using both OpenCL and Metal on the Mac systems, we found that Metal was across the board slightly faster. It was often only by a few percent, but in the interest of simplicity we decided to just use the results with Metal in the charts below. Feel free to go back to the raw results in the previous section if you wish to compare the results with OpenCL and Metal yourself. 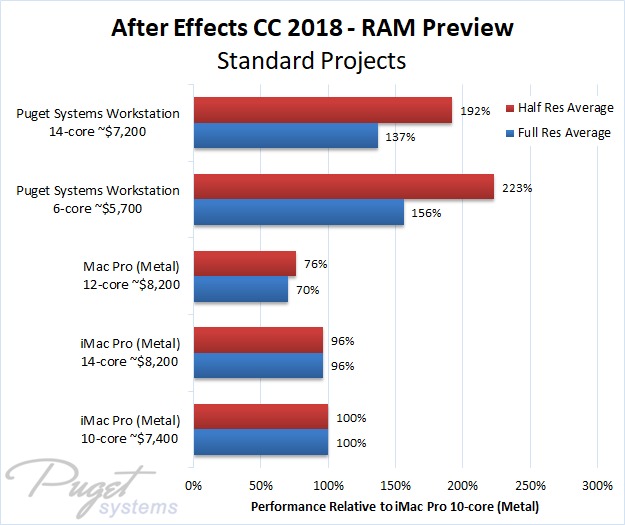 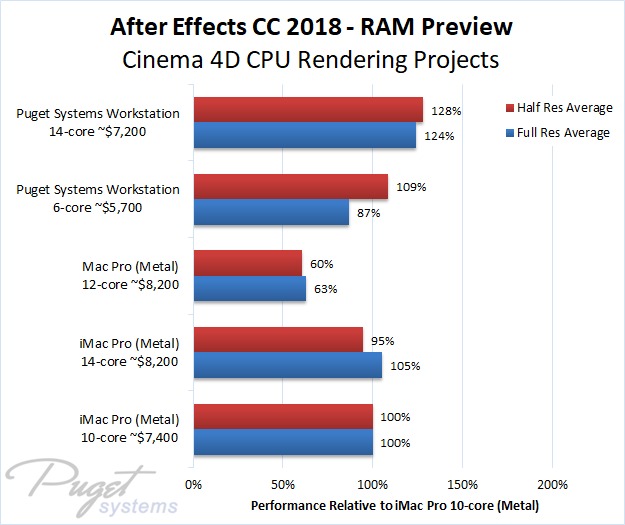 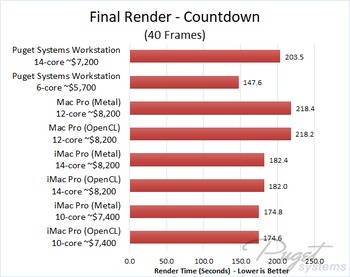 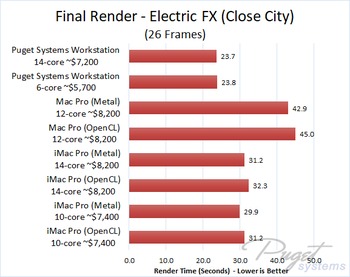 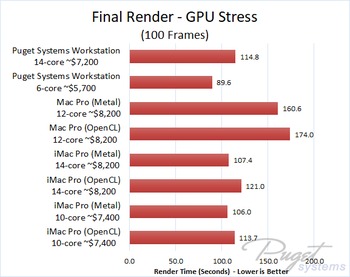 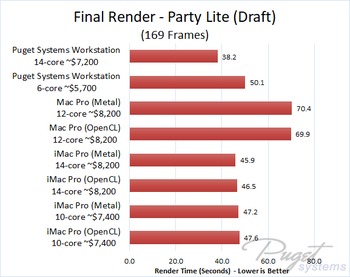 Once again, since the results should vary widely based on whether or not you utilize the Cinema 4D CPU renderer, we have separated our testing results between "standard" projects and those utilizing the C4D CPU renderer. Also, since Metal was across the board slightly faster than OpenCL on the Mac systems, in the interest of simplicity we decided to just use the results with Metal in the charts below. The difference is less if you utilize the Cinema 4D CPU renderer, and in this case the $7,400 and $8,200 iMac Pro systems were actually able to out-perform the $5,700 PC workstation. They were just 10-15% faster gain for a 30-40% increase in cost, but since this is the one time we saw any of the Mac systems be significantly faster than either of the PC offerings we tested we wanted to call it out. The $7,200 PC workstation that is more similar in cost to the Mac systems, however, is still a good 15-20% faster than the iMac Pro or twice as fast as the Mac Pro. We've discussed it a few times in this article, but it is worth pointing out again that performance in After Effects highly depends on whether you use the Cinema 4D renderer. If you do, a higher core count CPU (like the 14 core CPU in our $7,200 workstation) is much better. If not, a lower core count CPU with a high operating frequency (like the 6 core CPU in our $5,700 workstation) is significantly faster and lower cost. Also, while we tested the Mac systems with both OpenCL and Metal, we found that Metal was consistently faster by a few percent so for the sake of simplicity we decided to limit our final chart to just the results with Metal on the Mac systems.

Overall, if you do utilize the Cinema 4D CPU renderer, even our $5,700 PC workstation was significantly faster than the Mac Pro. However, the iMac Pro systems manage to edge out over this system by an average of 6-8%. This is comparing a $5,700 PC to a $7,400 and $8,200 iMac Pro, however, so this really isn't a fair comparison. Our $7,200 PC workstation is a more realistic comparison point and in that case the PC was 25% faster overall.

More "standard" projects (that don't use the Cinema 4D CPU renderer) is where PC really shines. At a similar price point to the Mac systems we tested, a $7,200 PC workstation is going to be roughly 50% faster than an iMac Pro or twice the performance of a Mac Pro. And if you go for a CPU that is optimized for this type of project, not only can you save a lot of money but you can even further improve performance. In this case, our $5,700 PC was 80% faster than the iMac Pro systems or 2.5 times faster than the Mac Pro!

Keep in mind that the pricing we are using for our PC workstations includes ~$1,000 for a monitor, keyboard, and mouse. If you already have any of those, the price/performance advantage of a PC workstation will be even larger. If you are interested in reading more about the performance of a PC workstation over a Mac system, we have a number of articles you may be interested in that compare Mac to PC in a range of applications. We also encourage you to check out our Recommended Workstations for After Effects and if you have any questions or concerns about making the move to PC, we encourage you to contact us!