Skip to content
Always look at the date when you read an article. Some of the content in this article is most likely out of date, as it was written on May 16, 2018. For newer information, see Cinema 4D CPU Comparison: Xeon Scalable vs Core i7 8700K, Core X, and Threadripper 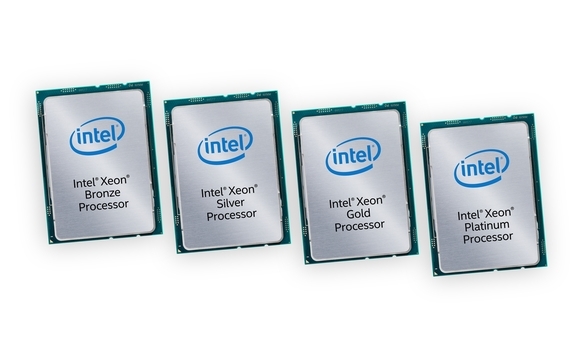 Intel released a new generation of multi-socket Xeon processors this year, dubbed "Xeon Scalable". These can provide a tremendous number of CPU cores – both as individual chips and even more so when used in pairs. To see how much this boosts Cinema 4D rendering performance, as well as how these processors hold up on the single-threaded side, we have run several of them through Cinebench. For comparison, additional CPUs from Intel and AMD are also included in the charts below.

To see how these new CPUs perform in Cinema 4D, we selected a few of the Xeon Scalable chips to work with. Intel makes something like fifty different SKUs in this series, so there is no way to test them all – but we picked models with both a wide range of core count (4, 12, 18, 20, and 28 cores) and clock speeds (from 2.4 to 3.6GHz base clocks). We are also including the top Intel mainstream (i7 8700K) and enthusiast (i9 7980XE) single-socket CPUs as points of comparison, along with AMD's top Threadripper model (the 1950X).

Cinebench provides three scores when run, so here are charts showing how the CPUs listed above performed. The first is an OpenGL test, which is actually more of a measure of video card performance within Cinema 4D – but can be impacted by the processor as well: 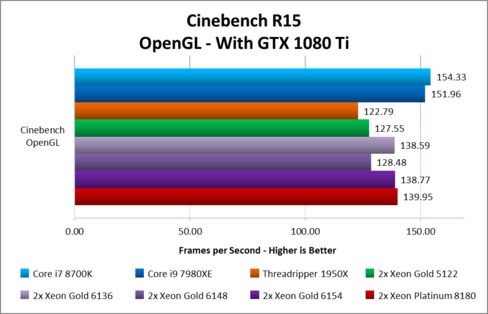 Next up, we have single-threaded CPU performance. This shows roughly how well these processors handle tasks like modeling, animation, and physics simulation within Cinema 4D: 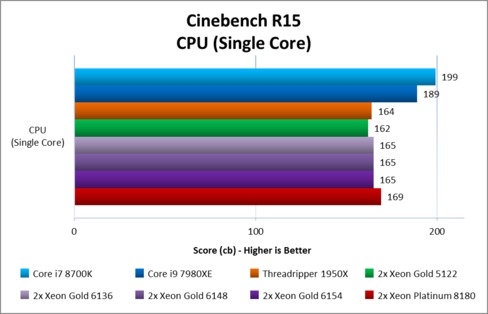 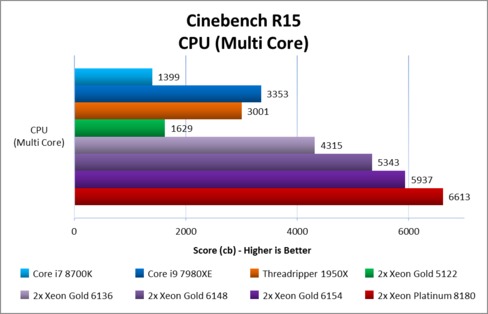 That last graph demonstrates how big of an impact a system's core count has on CPU-based rendering speeds. Rendering scales very well, with the dual Xeon Platinum 8180 system doubling the performance of an already very fast Core i9 7980XE. However, that comes at a price: a 10-15% drop in single threaded speeds (modeling, animation, physics, etc) and a much higher system cost. A single Xeon 8180 costs five times what the i9 7980XE does; two of them plus a more expensive motherboard and costlier memory adds up quickly.

Some of the other new Xeon processors are more reasonably priced, but you still sacrifice performance on the single-core side of things. It is the same story with AMD's Threadripper chips, although at least they have an advantage in that they are less expensive.

Looking at the single-CPU results in more depth, along with the Open GL graphics scores, the top performer is clearing Intel's Core i7 8700K. The i9 7980XE comes in close behind, though, making it a very good option for both rendering and general usage in Cinema 4D.

As discussed above, dual Xeon Scalable processors can be a great way to go for pure rendering speeds – but at the cost of general 3D modeling performance and much higher prices. Because of that, our standard recommendation for Cinema 4D users will continue to be single-socket solutions: the Core i7 8700K for folks more focused on modeling, animation, and simulation along with the Core i9 7980XE (and other Core X processors) for those who want faster render times with minimal sacrifice in other areas.

If you want a dedicated CPU rendering box, though, we can provide those – along the lines of what we build for Arnold and KeyShot. Given the results we found with these new Xeon chips, you can expect them to start showing up in our dual Xeon workstations soon.