Skip to content
Always look at the date when you read an article. Some of the content in this article is most likely out of date, as it was written on May 17, 2018. For newer information, see our more recent articles. 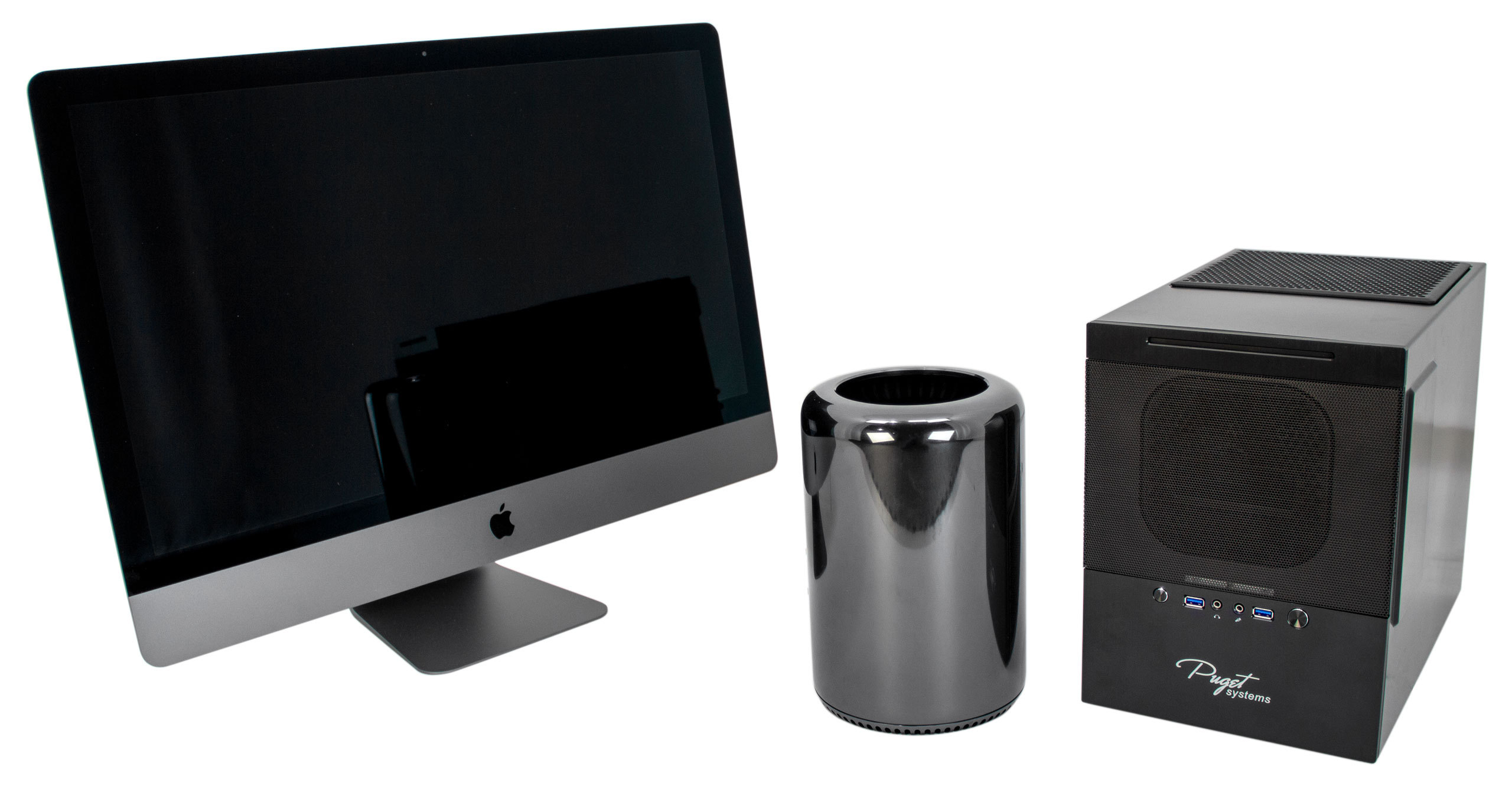 In this article, we are going to look at how Apple's desktop workstations compare to PCs in V-Ray. The V-Ray Benchmark is available for both Windows and macOS, and Macs have long been popular in content creation studios. Since all of the Macs currently available use AMD graphics cards, we will focus only on V-Ray Adv / CPU performance; NVIDIA GPUs are required for V-Ray RT.

To see how these different platforms compare in V-Ray, we ran V-Ray Benchmark 1.0.8 on three Mac workstations and two PC workstations. On the Mac side, we've got an older (but still being sold) Mac Pro with a 12-core CPU and two newer iMac Pros with 10- and 14-core processors; all of those use Intel Xeon chips. For the PC side, we wanted to have similar core counts included – so one workstation uses Core X series processors from Intel and was run with 10-, 14-, and 18-core chips installed. The other uses AMD's Ryzen Threadripper platform and was tested with 12- and 16-core CPUs.

Things like the video cards and SSDs varied a bit between the Mac and PC systems, but that should not impact V-Ray CPU scores. If you would like more details about the full hardware configurations we tested, click here to expand the following section.

Here are the results for the various systems we tested in V-Ray Benchmark 1.0.8: 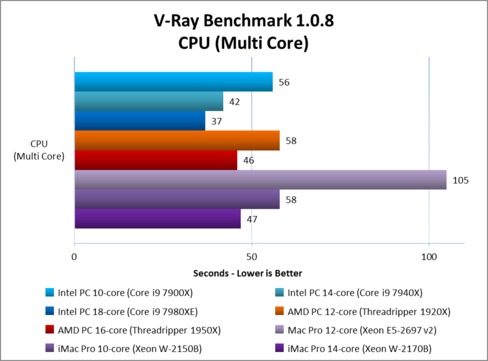 Apple's newer iMac Pro all-in-one workstations perform almost identically to the AMD Threadripper system we tested, but a little bit behind the Intel-based system with the same core counts. The 10-core iMac Pro is about 4% behind its PC counterpart, while the 14-core is approximately 10% slower. Since the CPUs here are built on the same technology (Xeon W and Core X both use the Skylake architecture) my suspicion is that the iMac Pro doesn't reach as high of all-core turbo speeds. That makes sense, given the limited space available for heatsinks or fans inside these all-in-one computers – and their remarkably quiet operation, even under load. We didn't have an 18-core iMac Pro to test, but I assume this trend would continue.

I hadn't mentioned the older Mac Pro yet because its performance in V-Ray is really poor. That is surely due to its use of a three-generation-old CPU and similarly old video card, so I cannot fault the hardware too much… but I do think it is rather embarrassing that Apple is still selling such old hardware. They have said a newer Mac Pro desktop will be coming, in 2019 from what I have heard, but even when the current Mac Pro is finally retired this can still serve as a reminder to look under the hood of a computer before buying it. Someone purchasing one of these systems today, in 2018, is overpaying for a severely under-performing system.

Speaking of overpaying, let's take a look at how much a full Puget-built PC workstation might cost – and compare that with what Apple charges for the iMac Pro (and the dated Mac Pro). To be fair here, we included a full kit of keyboard, mouse, monitor, and tech support that were selected to match or exceed the quality of what Apple bundles with their systems.

Here we have direct comparisons with both 14- and 10-core systems, and as you can see the Puget workstations are $600-1000 less expensive for similar specs and better performance. In fact, you could even get the top-performing Intel Core i9 7980XE 18-core and still pay less than what Apple charges for their 14-core design! And don't even get me started on the price tag of the older Mac Pro…

Apple's current crop of iMac Pro workstations aren't bad at rendering in V-Ray Adv, but you'll pay a lot more to get one than you would for a better-performing PC. Moreover, there are options on the PC side for even faster rendering speeds if you do want to pay more – just check out our look at the new Xeon Scalable processors in V-Ray. Going PC also opens up the option to use V-Ray RT, which doesn't work on the latest Mac desktops since they don't have any NVIDIA GPU options.