Like most software packages, there is a list of system requirements (including a detailed list for video cards) that can be used to help ensure the hardware in your computer will work with their software. However, most "system requirements" lists tend to cover only the very basics of what pc hardware is needed to run the software, not what hardware will actually give the best performance. In addition, sometimes these lists can be outdated, list old hardware revisions, or simply outright show sub-optimal hardware.

Because of how inconsistent those lists can be, we've taken the time to perform testing to determine what hardware runs SOLIDWORKS the best. Based on this testing, we have come up with our own list of recommended hardware. 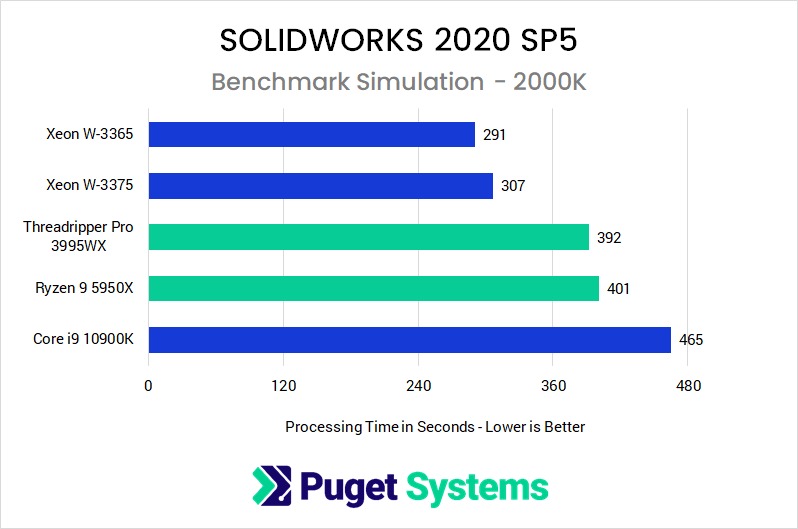 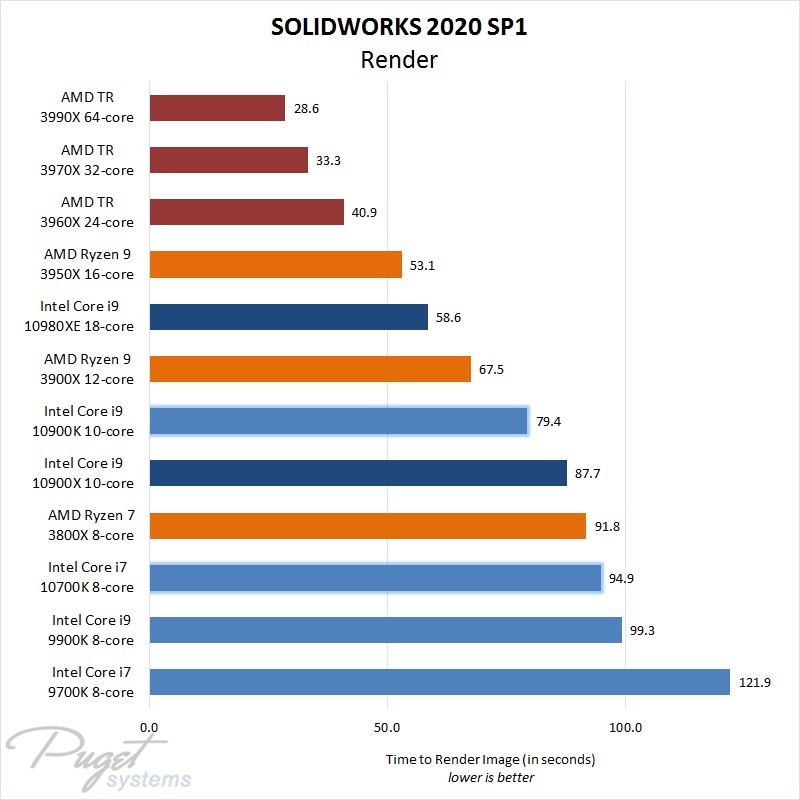 Dassault Systemes advises their customers to use a workstation card, and there are actually some significant performance advantages to doing so. We found that in some situations a low-end Quadro can outperform "faster" GeForce cards. In addition, using a certified card is the only way to get official support for features like Realview and Ambient Occlusion.

Prior to SOLIDWORKS 2019, there was very little performance difference between different Quadro video cards - except at the very high end, with extremely complex assemblies on high resolution monitors. However, there is a new feature that debuted in SW 2019 called “Enhanced graphics performance” mode. With that enabled, the video card takes on much more of the work involved when displaying parts and assemblies. That also leads to a much greater difference in frame rates with different Quadro cards, which can be seen in the graphs below. 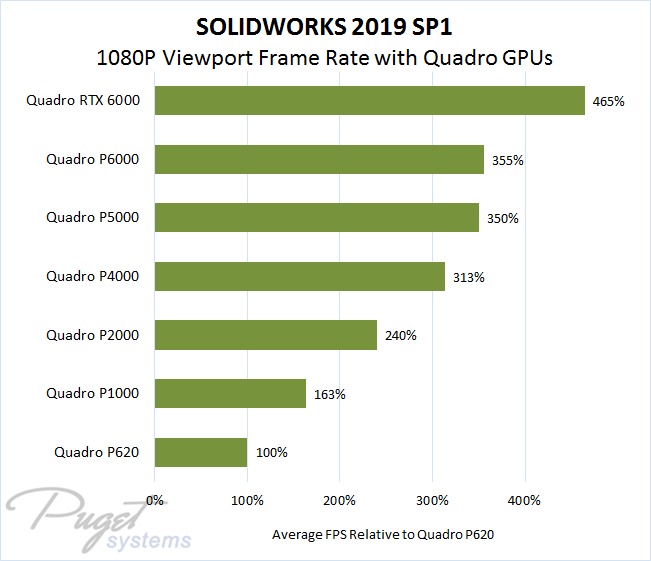 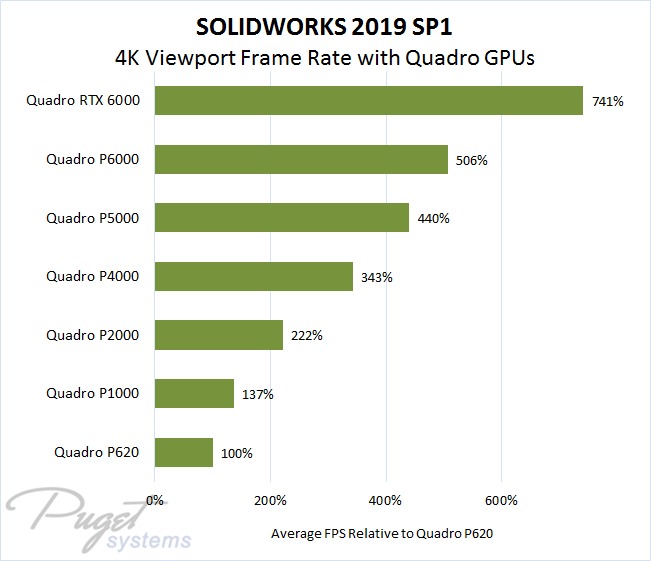 It is easy to look at those two graphs and surmise that lower-end Quadro cards are not effective or have no place in a SOLIDWORKS workstation, but that is not the case. These performance numbers are based on several sizes of assemblies and different graphics settings. Further, high end video cards are often putting out frame rates far in excess of what monitors can display.

From the raw test data we have accumulated, we can draw some more helpful conclusions. Here are our recommendations for video card selections, including some newer models that have replaced those we tested, depending on model size and resolution - with the goal being smooth frame rates (>30fps) under most circumstances:

Keep in mind that these recommendations are based on SOLIDWORKS 2019 with "Enhanced graphics performance" enabled. Older versions are less sensitive to the video card selection, but newer versions should be pretty similar.

While the exact amount of RAM you need is going to depend on your particular models, Solidworks generally needs between 4-8GB of RAM for tasks such as rotating models, simulations, and renders. Due to this, we recommend having 16GB in your system to give you plenty of free RAM for other programs you may have running.

A general rule of thumb is that you need about 5GB of RAM for Solidworks itself, then at least 20 times the largest assembly size you work with. So if your assemblies are all about 200MB in size, you would need 5GB + 20x.2 which works out about 9GB of RAM minimum. Using this formula, the minimum amount of RAM we would recommend for various assembly sizes is:

Keep in mind that any additional software you are running (whether it be for simulation, rendering, or even web browsing) will require RAM as well so if it looks like you will be at all close we highly recommend upgrading to a larger capacity.

With the falling costs associated with SSDs, we almost always recommend using an SSD for the primary drive that will host your OS and the installation of Solidworks. The high speed of SSDs allows your system to boot and launch applications many times faster than any traditional hard drive.

Using an SSD instead of a more traditional hard drive can also in many cases can give a noticeable decrease in the time it takes to open and save assemblies. Be aware that smaller assemblies tend to not be I/O bound which means that there may not be a large difference with a faster storage drive but in general the longer it takes you to open an assembly, the more useful an SSD will be. For extremely large assemblies, the newer NVMe drives like the Samsung 960 Pro (with read speeds of 3.5GB/s!) can further improve open/save times but for more commonly sized assemblies they are unlikely to give much of a performance benefit.

One last factor that should be taken into consideration is that SOLIDWORKS performs a check of every drive in the system during the startup process. Normally, this check does not greatly impact the time it takes for Solidworks to launch - but if you have a traditional platter hard drive in your system that has gone into it's low-power state (which by default happens after the drive has not been accessed for ~20 minutes) SOLIDWORKS has to wait for the drive to spin up which can take as long as 10 seconds. In other words, each platter drive in your system can potentially increase the time it takes Solidworks to launch by about 10 seconds. For this reason, unless you need large amounts of very cost-efficient storage we highly recommend using only SSDs if possible.

See which SOLIDWORKS Workstation is right for you!