This is the second in a series of blog posts about Home Theater Computers (aka HTPCs), where several Puget employees get a chance to explain their approach to home theater computing.  You can read William's entry here.

If I had to sum up the goals of my home theater with a single word, it would be "Convenience".  I actually don't spent that much time in my living room, but when I do, I really want to minimize hassle.  I don't mind a lot of work setting things up the first time, but I just don't want to waste my precious R&R time juggling five remotes, three pointing devices, and a keyboard.

The chief reason that designing a home theater can be so complicated is that we want them to do so many things!  At a fundamental level, this is because technology is changing how we consume media.  In the 90's, playing a movie meant buying a VHS or DVD player, and then hitting up your local rental store.  These days, there's just so many options!  There's Hulu, Netflix, Vudu, Youtube, and a zillion other options out there.  If you purchased a movie from iTunes, it'd sure be nice to watch it on your TV too, right?  If you're a music junkie and you want your sweet home theater speakers to pump out some tunes, then the choices become even more complicated!  There's traditional media (cd players, radio tuners), local media (mp3 files, stuff purchased from iTunes), and streaming services (grooveshark, last.fm, pandora, spotify, etc). 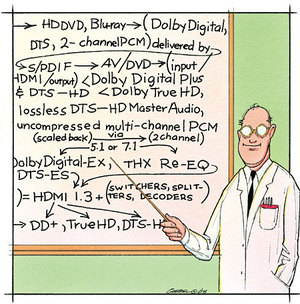 This is what makes a good home theater computer so appealing, it's a single device that can handle pretty much everything listed above.  My personal home theater solution has been a work-in-progress for the last 4 years or so, and I've really tried a bunch of different solutions.  Here's the rundown on what I found works best for me.


The hardware in my system is mostly hand-me-down stuff from my recently upgraded desktop.  The good news is that the performance demands of an HTPC aren't particularly high.  As such, if I was shopping for a new home theater computer, I'd focus on two goals: keeping the system as low-noise as possible (no one wants to hear the drone of your hard drive over the music you're trying to enjoy), and using energy effecient hardware.  This system would be powered on 24/7, and I'd want to minimze the damage to my power bills.  Something like our Serenity HTPC would fit that bill.

Next up, I needed to solve my too-many-remotes problem.  It quickly became obvious that I needed a good universal remote solution to control all the input switching.  I ended up going with the Harmony 880, and I've been extremely satisfied.  This remote has a programmable interface, and it let's you group device settings by activity rather than making you individually manipulate each device.  So, (once configured properly) selecting "Use Playstation 3" will turn on the TV, set it to the right input, turn on the reciever and do the same, adjust the volume to a setting appropriate for the device, and then turn off any other devices that I'm not using.  If I wanted to quickly switch back to my HTPC and check some sports scores, I could do it with a single button press.  Pretty slick! 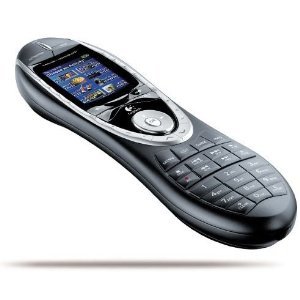 Now that I had my fancypants remote, I just needed to get it working with my computer.  I purchased a Windows Media Center Remote for about $25, which comes with a USB IR Reciever.  The good folks at Logitech have written a WMC Remote profile for their harmony remotes, so after a bit of configuration, I had my remote playing nicely with my media center.


Finally, I just needed a remote-friendly interface on my computer.  I don't plan on having a mouse or keyboard in my living room, so the software that I'd use needed to be designed for the use of a remote from the ground up.  In William's post, you'll see that he's gone with good ol' Windows Media Center, which is bundled with most versions of Windows.  It works out well for him, because his focus is on old-school activities TV Tuning and using physical media like DVDs.  For me, I wanted something with a greater focus on online content.  I tested a bunch of different solutions, but Boxee stood head and shoulders above the rest. 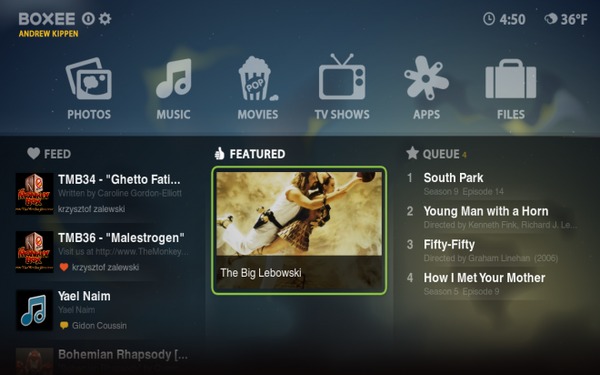 Boxee is a media center appliation designed to aggregate content.  For example, if you pull up "TV", it'll show you a list of local media conent (if you have any), and any media available through online sources.  For example, Comedy Central provides free streams of The Colbert Report.  A few button clicks, and I can pull up free shows on Hulu, movies on Netflix, or music from Pandora.  Perfect!  It's worth mentioning that Boxee is still in beta form, and that means there's a fair share of bugs and missing features.  I'm prepared to just deal with them, but if you're not the kind of person who wants to mess with such things, maybe Boxee isn't ready for you yet.

So that's my setup, and I love it.  I think that technology will continue to evolve and improve the ways that we can access media in our lives, so our home theater conputers will continue to evolve along with them.  For example, if Boxee ever gets around to adding GrooveShark or Spotify subscription services, I'd sign up in a heartbeat.  Once I did that, I'd probably need to end up adding some sort of keyboard to my home theater for building playlists, but I'll just cross that bridge when I get there.  For now, I just play music the old-fashioned way, album by album.

A good HTPC and a quality universal remote is the center of my home theater now, and I love it.  As the internet becomes a bigger part of our entertainment, I expect that home theater computers will only become more and more popular.