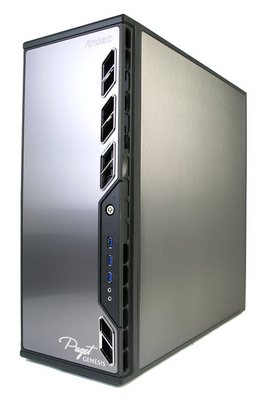 When the higher resolution 4K displays were announced, graphic designers and video editors were among the first people to call us up and ask whether or not these would work with their system. Camera resolutions and RAW picture files are getting larger and larger, and editors either have to shrink the image to a smaller size, or do a lot of work with the image zoomed way out, both of which have their own drawbacks, so some folks have been hoping for a larger resolution standard for a while.

Our "Puget Labs" department has put together a helpful article about what it takes to run a 4K Monitor, which might make for some helpful extra reading if you're in the market.

Fortunately, if you're just doing photo editing type work you have it quite a bit easier than people doing video editing. (Video editors, read more here). You won't need to pack quite as much video card power, nor is refresh rate a terribly large concern.

The biggest question for a graphic designer looking at 4K is which video card to select. Photoshop, for example, is sometimes able to offload some of its processing work to the video card, so you want to make sure that the video card is powerful enough to handle a huge resolution without impacting your performance. We recommend a card with 2GB of graphical memory or more.

The other big video card consideration is output types. Some 4K displays take a single HDMI port (and these are generally designed as a TV set) and run at 30Hz. The 4K monitor-style displays run at 60Hz, and usually require a DisplayPort connection to utilize a feature called MST (multi stream transport). For these type of displays, we recommend something like the Radeon 7770 (or better) video card.

Other than a fairly robust video card, just configure a 4K graphic design work station like any other editing rig. We recommend basing your configuration off of our Genesis I, much like this system featured here.