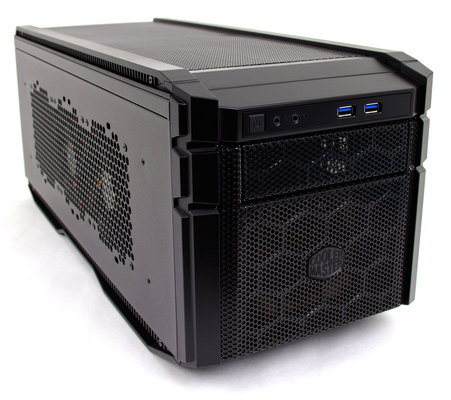 Based on the new Peak Stacker, this system is completely unique in the computer world as it pairs the ASUS Z9PH-D16 (which is a Half SSI motherboard that is intended to be used exclusively in a rackmount chassis) with the very unique Cooler Master HAF Stacker 915R. While this chassis is designed to utilize Mini-ITX motherboards, with some modifications the deep design actually makes it a perfect chassis to house the ASUS Z9PH-D16. The end result is a custom designed, compact, high performance, dual Xeon system that is capable of the same CPU performance as systems that are twice or even three times larger. In fact, the compact nature means that we are able to cool the CPUs and motherboard much more efficiently than normal which makes this system both cooler and quieter than the average dual Xeon computer.

This system is not intended to be used as a typical workstation where you connect a monitor, keyboard and mouse. While you can still do that, the video performance from the onboard graphics is that of a server node. The primary intended use for this system is as supplemental off-load compute server for an existing workstation and compute cluster node. However, it would also be well suited for use as a general purpose server where a compact, quiet, but still high performance server is preferable to more typical, bulky and noisy systems. And if huge performance in a small package is not enough, the Cooler Master HAF Stacker 915r is also unique as it is designed to interlock and stack with any other "Stacker" series chassis from Cooler Master - including other chassis of the same model. This makes it ideal to be used as a node in a cluster computer as you can very easily and compactly add additional computers for more processing power without the need for an entire rackmount setup.

Cluster computers are a great way to achieve huge amounts of computing power without an equally huge monetary investment. Instead of just a single computer crunching numbers to solve a computational problem, a cluster utilizes multiple computers (even hundreds in some cases) to solve the same problem much, much faster. In fact, the Peak Stacker is ideal as a computational "black box" since a very compact work environment can be achieved by using a laptop as the primary workstation and directly connecting it to the Peak Stacker with a network cable. This gives the laptop access to serious compute performance for a variety of applications such as video rendering, static and dynamic engineering analysis and compute intensive scientific applications.

While cluster computers require very specific and tailored software packages, there are many programs that scale optimally on small clusters with 2 to 4 nodes. There are a large number of open source and commercial applications that utilize distributed computing with MPI (Message Passing Interface) or network socket communication in which this system is ideally suited for. While not at all a complete list, some of the more common application types include;