Written on July 8, 2020 by Kelly Shipman
Share:
Always look at the date when you read a hardware article. Some of the content in this article is most likely out of date, as it was written on July 8, 2020. For newer information, see our more recent articles.
Table of Contents

When it comes to modeling tasks, the high clock speed of Intel’s i9-10900K makes it the best choice for people that do not do any CPU rendering.

AMD’s Threadripper CPUs are by far the best CPUs for rendering, including baking textures and using an Activeshade viewport, offering up to double the performance of any Intel-based CPU.

AMD’s Ryzen 9 3950X earns a nod as being a good all-around performer without the cost of stepping up to a Threadripper.

With the release of 3ds Max 2021, as well as new CPUs from Intel and AMD, it was time for a new round of hardware testing. AMD has become a strong contender in the CPU space by offering a large number of cores at very competitive prices. As a response, Intel has begun increasing the number of cores in its CPUs. While they still don’t offer as many cores as you can find on AMD, they do have a higher clock speed. This new competition has resulted in CPUs that range from 10 cores/20 threads to 64 cores/128 threads. 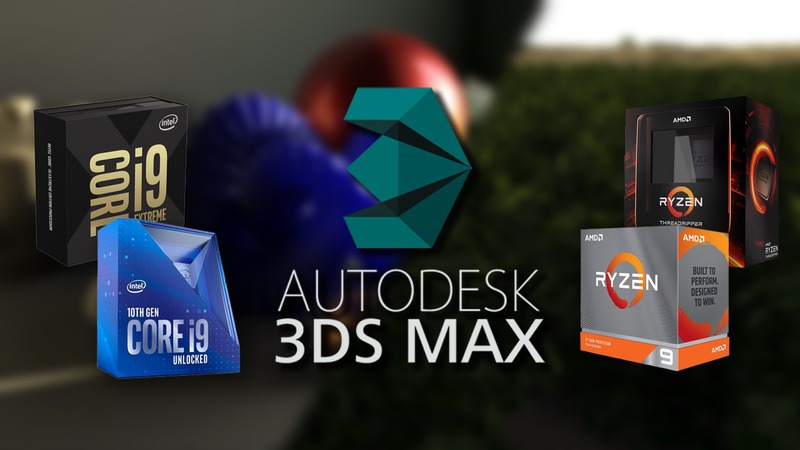 For this article, we’ll be taking a look at how the most recent CPUs compare to each other and the previous-generation Intel i9-9900K. The focus will be on CPU performance using a benchmark suite that we developed internally. More details of that benchmark are below.

If you would prefer to skip over our test setup and various benchmark results, feel free to jump straight to the conclusion.

Looking for a 3ds Max Workstation?

Here are the detailed specs of the test platforms we used:

This version of the 3ds Max benchmark suite was created by myself and runs mostly within 3ds Max using MAXscript. Thankfully, Autodesk has built a very strong scripting language within 3ds Max. AutoIt was used as a wrapper to handle things like remotely starting the benchmark, uploading results, and cleaning up any temporary files left behind after each pass.

The tests are grouped into three categories: Rendering, Simulation, and General Use. This should make it easier for people to see the results that are specific to their own workflows, and then in turn make the best decision for their needs. I’ll break down the specifics of each test below.

These tests were run multiple times on each CPU and averaged. We saw very little variance between runs, except for a couple system errors, in which case the results were tossed and re-run. For the scores, I used the 10900K as a baseline and the scores represent a percentage faster or slower than that CPU. Let's get into the results.

When it comes to CPU Rendering, nothing comes close to the performance of AMD’s Threadripper. We tested Arnold, ART, and Scanline, and in all three tests the Threadripper CPUs place in the top spots. Arnold specifically has been highly optimized for multicore CPUs. The 3990X manages to finish the render almost 4.5x faster than the 10900K and over 2.5x faster than Intel’s flagship 10980XE. With ART and Scanline the margin narrows, but the Threadrippers are still much faster than anything else. In both of these cases, the 3970X actually takes the lead from the 3990X. We have seen other applications here in Labs with similar results. Even AMD’s Ryzen 9 3950X manages to outperform every Intel CPU in every test, making it a fantastic budget option.

For simulations, we have two tests: a cloth simulation and a Bifrost fluid simulation. These are opposite ends of the spectrum. In 3ds Max, cloth simulations really prefer higher clock speed, so we see the Intel 10900K taking the lead. The Fluid Simulation on the other hand is a bit mixed. The AMD Threadripper 3970X and 3960X take the top spot with nearly identical times, while the 3990X comes in near the bottom. Most notable with the Fluid Simulation test is now narrow the gap is. Also, do note that both of these tests are using built-in simulation methods. If you are using a 3rd party plug-in such as RealFlow, FumeFX or Phoenix FD, your experience may be different.

This series of tests is more applicable to every user. They cover tasks such as loading a large scene (4GB max file), saving scene, and performing a series of extrusions, tessellations, and MeshSmooths. This is to represent the basis of what anyone uses 3ds Max for modeling. The extrude, tessellate, and MeshSmooth tests are exaggerated a little beyond what the average user would perform to make it easier to measure differences. A lot of this will relate to what a user would view as “snappiness.” When you click on an action, sometimes there is a delay of a couple of seconds before the action takes place. Each time this happens it is only a brief moment, but over the course of a project it adds up to some real frustration.

As you can see from the charts, the clock speed of the 10900K takes the lead in all of these tests. If your workflow is often slowed while performing basic modeling tasks, a higher clock speed CPU - even if it has fewer cores - may help you speed things up.

If rendering is a significant bottleneck in your workflow, the best CPU is one of AMD's Threadripper series of CPUs as all three models far outperform any Intel CPU by a large margin. Even AMD’s Ryzen 9 3950X will outperform the top Intel processor while being almost half the cost.

If you need a more all-around performer, the AMD Ryzen 9 3950X is a great choice. While it is not quite as fast as the 10900K in modeling tasks, it’s rendering performance may offset any minor slowdowns you’d experience.

Looking for a 3ds Max Workstation?