Skip to content
Always look at the date when you read an article. Some of the content in this article is most likely out of date, as it was written on May 11, 2018. For newer information, see our more recent articles.

PhotoScan makes use of the CPU to some degree in every processing step, but the way the CPU is used varies. Some steps favor clock speed, others core count – and some are also GPU accelerated. To get a better handle on how the CPU affects overall performance, and to answer the question of which CPU is best for PhotoScan, we put several modern Intel and AMD processors to the test.

Because the GPU has an impact on processing times in some workflow steps, we made sure to use the same video card in each system we tested. Multiple video cards can also improve performance in PhotoScan, but we have already looked at that in another article.

We used relatively small photo sets to avoid the amount of memory that each CPU supports becoming an issue. Please note that RAM capacity is absolutely something to consider if you work with large image sets, though, and we will discuss it more in the analysis and conclusion sections. As with the other recent articles we have published, all tests were conducted with "High" quality settings. 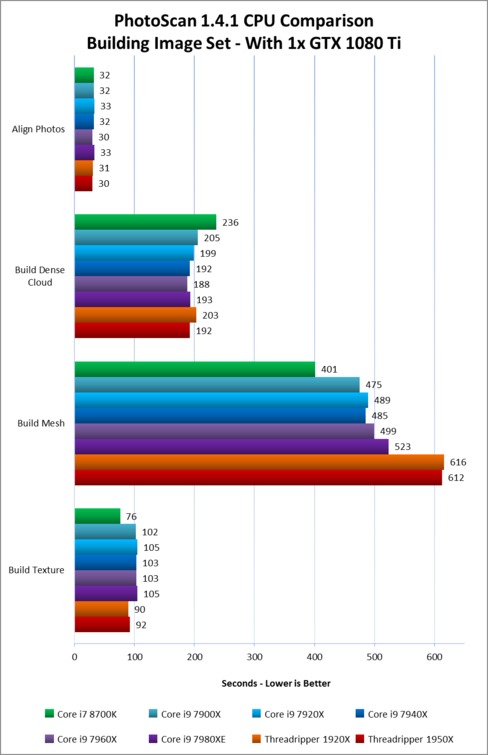 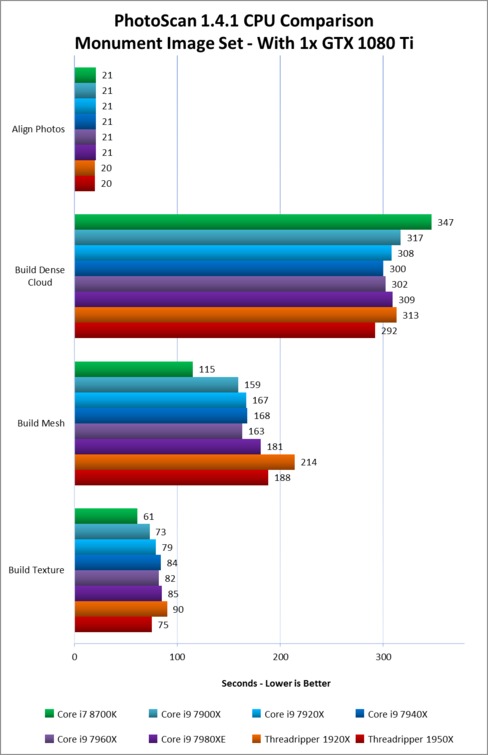 With both of these image sets we can see some trends:

In both cases, the Core i7 8700K ends up coming out as the overall winner. It has such a big lead on the Mesh and Texture steps that it makes up for the slower performance in Build Dense Cloud… plus, the Z370 platform it is on could support a second GPU for even faster performance there. Given its price point, the 8700K is a stellar processor choice for PhotoScan in workloads where the Build Dense Cloud step is no more than half the overall processing time and where the 64GB memory limit isn't a bottleneck.

For situations where Build Dense Cloud is a more substantial part of the overall calculations – for example, when using 'Ultra High' quality settings on that step – a higher core count processor could gain enough advantage that it would outpace the mainstream 8700K. Something in the Core i9 family would do well there, surpassing AMD's Threadripper chips. Those CPUs also support up to 128GB of memory, to better handle large photo sets, and they could scale up to three GPUs as well (for even more speed in Build Dense Cloud).

With truly massive image sets, though, even 128GB (the max for Core i9 and Threadripper processors) might not be enough. In those cases, Intel's Xeon processors would probably be the best option – since they support Registered ECC memory for extremely high RAM totals. Since that is sort of a niche use case, we will look at PhotoScan performance with single and dual Xeon processors separately.

Here is a chart that summarizes the results above: 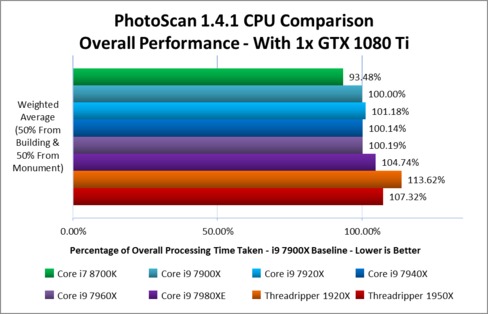 Of the CPUs we tested, Intel's Core i7 8700K was the fastest overall for PhotoScan. It is limited to 64GB of memory, though, and showed weaker performance in the Build Dense Cloud step – so if either of those is a concern for you then an Intel Core i9 processor will address both issues. Those can handle up to 128GB of memory, three video cards (as opposed to two on the 8700K), and have more cores to help with the portions of PhotoScan which are well threaded. Sadly, Threadripper isn't a good choice for PhotoScan.

What about Xeon processors and Mac workstations? We will be testing those soon, so stay tuned!