Skip to content
Always look at the date when you read an article. Some of the content in this article is most likely out of date, as it was written on June 8, 2018. For newer information, see our more recent articles.

What about actual rendering performance, though? Does the clock speed or core count of a given computer's CPU impact how fast the system can process jobs in OctaneRender? Let's find out!

To see how clock speed and core count might affect OctaneRender performance, without bringing in too many variables like chipset, PCI-Express lane support, etc – we opted to use Intel's Xeon W platform. It offers processors from 4 to 18 cores, and all of them support the same number of PCI-E lanes (48). For the motherboard, we used a Gigabyte MW51-HP0 motherboard to provide the right PCI-E slot layout for up to four GPUs. And finally, to make sure the CPUs were tested to their limits, we used the fastest GPUs for Octane: Titan Vs.

On the software side, we wanted to use the latest version of OctaneRender – which as of this writing is 3.08 – so we took OTOY's OctaneBench program and modified it slightly. The current release of OctaneBench was still using the 3.06.2 version of the rendering engine, though, which does not support the Titan V we wanted to use. However, you can manually copy over the files from 3.08 into the folder containing OctaneBench and then it will use the newer rendering engine. We cannot redistribute the modified software, but if you download both OctaneBench 3.06.2 and the demo version of OctaneRender 3.08 it is pretty easy to copy over the necessary files.

Here are the total scores from OctaneBench for the 1 to 4 Titan V cards running on the Xeon W-2125 and W-2195 processors: 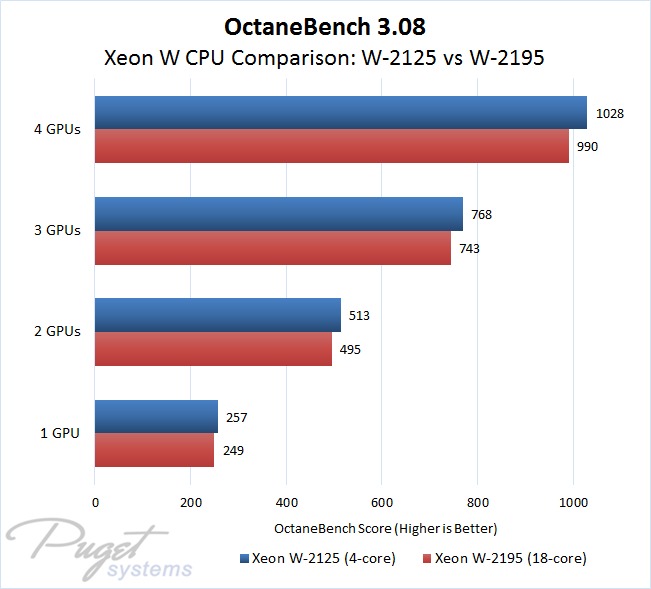 Perhaps surprisingly, the CPU with fewer cores – Intel's Xeon W-2125 – outperformed the higher core count W-2915 in OctaneRender. That seems to have less to do with the number of cores, though, and is more likely due to the higher base and turbo clock speeds on the W-2125. To double-check this, we looked at a smattering of other tests we've run recently here in Labs and found that OctaneRender scores do appear to be higher on systems with the fastest clock speeds.

Why might this be? While the bulk of the calculations involved in OctaneRender – and other, similar GPU rendering engines – are carried out on the video cards, there are some small steps like loading data into the program and coordinating the workload between multiple video cards which do briefly use the central processor. That sort of usage isn't going to need a lot of cores, but with higher clock speeds (and more instructions per clock) such steps will be completed more quickly, leading to faster overall render times.

So does the CPU Matter for OctaneRender? Yes – not a huge amount, but it will impact performance. Based on our data, it is apparent that having lots of CPU cores doesn't help OctaneRender, but high clock speeds do. This is good news for several reasons:

Based on this info, and in combination with our other recent tests, we are moving our OctaneRender configurations toward using high clock speed processors like the Xeon W-2125 and Core i7 8700K. You can see those changes reflected in the systems below.