Written on May 13, 2014 by Matt Bach
Share:
Always look at the date when you read a hardware article. Some of the content in this article is most likely out of date, as it was written on May 13, 2014. For newer information, see our more recent articles.
Table of Contents 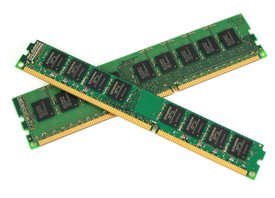 Recently, a workstation PC was reviewed on a well-known computer hardware site that included a Quadro video card, but no ECC memory. In the comment section of that review, a heated discussion occurred with different readers arguing about whether the lack of ECC RAM was a good or bad thing in a workstation. One side argued that ECC is great for workstations since it is much more stable (as we've explained in our Advantages of ECC Memory article) and stability is a very high priority for a workstation. The other side claimed that ECC memory was slower than non-ECC memory so it was not the right choice for a high-end workstation where performance was a priority.

Much of the ECC versus Non-ECC argument comes down to speed versus reliability. The reliability argument at least is easy to validate; in fact, over the last 12 months we have seen only a tiny .09% failure rate with ECC memory compared to a .6% failure rate for standard memory. As for the performance argument, we have actually tested RAM performance in the past and found that faster memory does not always equate to better performance since the RAM is often not the part that is bottlenecking performance. However, the expected performance drop of ECC RAM is slightly different than what we tested in that article since it is due to the extra error checking process rather than slower timings or frequency. In fact, Crucial has a statement on their knowledge base that ECC memory will decrease your computer's performance by about 2% compared to standard memory.

To settle the question of whether ECC actually lowers system performance we ran a series of benchmarks with standard RAM, ECC RAM, and Registered ECC RAM that all run at the exact same frequency, timings, and voltage.

To examine the performance of the three kinds of memory, we used the following hardware:


This setup is identical to one of our most popular workstations - the Genesis I. Plus, the Supermicro X9SRA motherboard and Intel Xeon E5-2680 V2 can both utilize either standard, ECC, or Reg. ECC memory as long as the total size stays below the RAM threshold for each type which makes it an ideal platform for comparing RAM performance.

Our first benchmark is Geekbench 3, which measures both single and multi-core CPU performance and includes a section dedicated to memory performance. Geekbench is intended to simulate real-world scenarios, but we have always found it to be more of a theoretical benchmark. 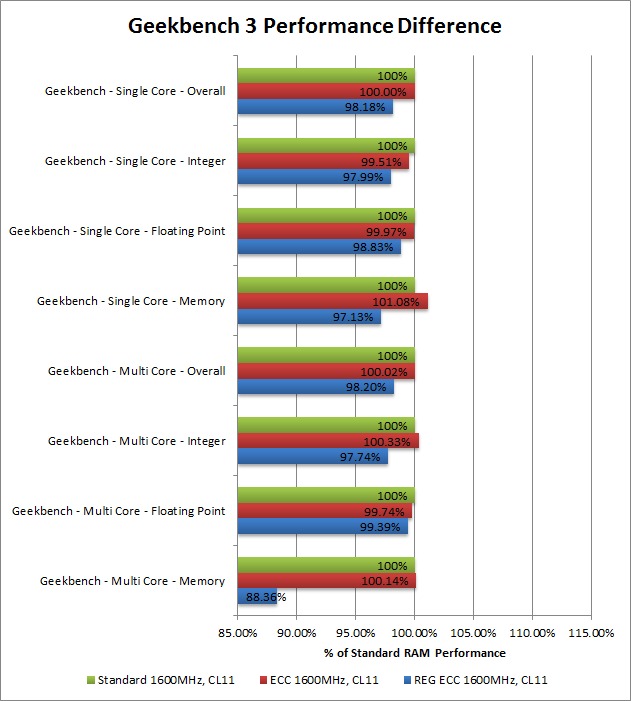 Already, our preconceived notions about ECC memory are completely thrown out the door. In Geekbench 3, ECC memory performed almost exactly the same as the standard RAM and in some situations was actually slightly faster! Oddly, Registered ECC memory (which we expected to perform the same as ECC memory) performed ~1-2% slower than standard memory in most tests, and almost 12% slower on the Multi Core Memory test.

PCMark 8 is a very well-known benchmark and if any benchmark could be considered an industry standard, this is it. PCMark 8 includes a number of different tests, but we chose to run the Creative Suite which is designed to simulate workloads of those that work with media and entertainment as well as the benchmark suites for Adobe and Microsoft Office. 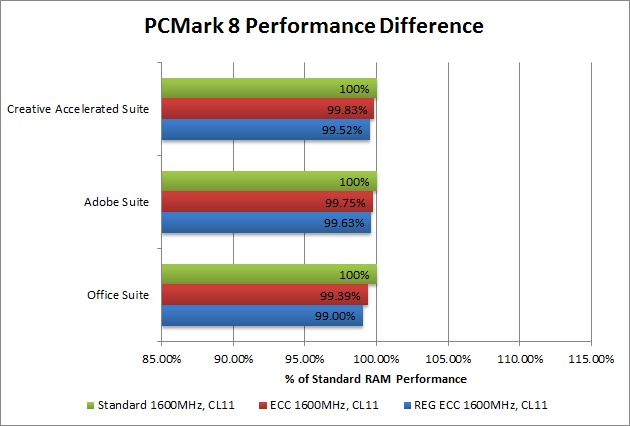 Unlike Geekbench 3, there are no huge performance differences between the three types of RAM. ECC RAM performed .17-.61% slower than standard RAM and Registered ECC memory performed .48-1% slower. This is a really small number and frankly is hard to guarantee that it is not simply due to testing fluctuations. Still, taken at face value PCMark indicates a very small drop in performance with ECC memory, and a slightly larger drop in performance with Registered ECC memory.

Cinebench R15 is a benchmark that is somewhat real-world since it uses the animation software CINEMA 4D which is used by a number of different studios and production houses across the world. 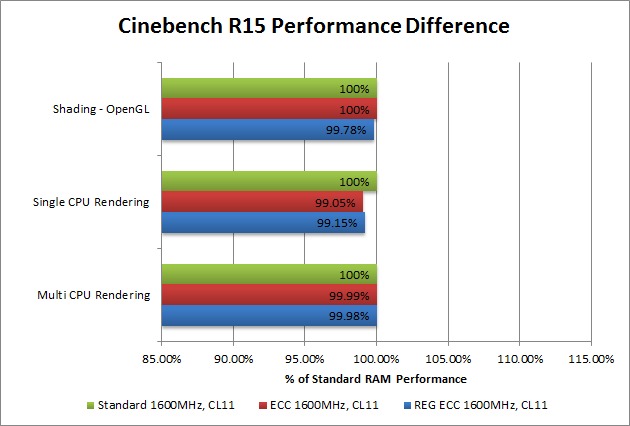 The test listed at the top of the chart (Shading - OpenGL) is a GPU-based test which should not be greatly influenced by the RAM. The other two, however, should be affected by the RAM to some extent. In fact, the only test that gives more than a tiny fluctuation is the Single CPU Rendering test with both the ECC and Registered ECC RAM performing ~1% slower than the standard RAM.

Unigine Heaven Pro 4.0 is the only benchmark we will be using that is designed to measure a system's performance while gaming. Since we are primarily concerned about the performance of a workstation, gaming performance is not a huge priority. However, it is a good thing to include since it gives our benchmarks a little bit of variety. 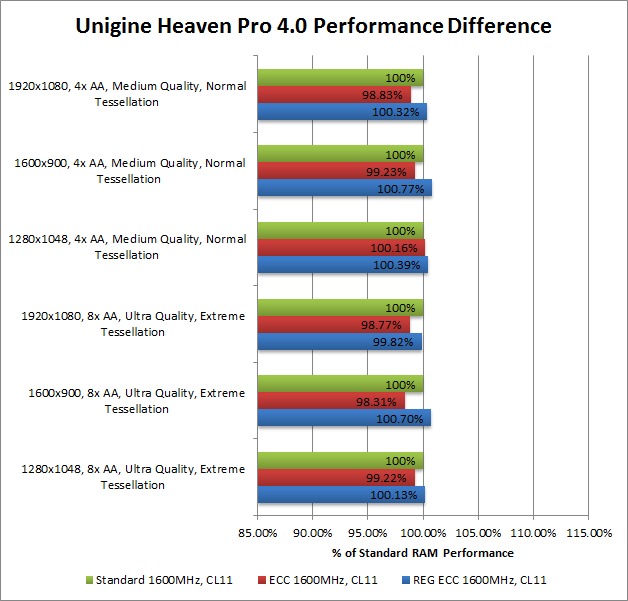 On every system we sell, we have a suite of benchmarks that we run during our testing process. Included in this suite are three different encoding programs - Lame, Handbrake, and Windows Media Encoder. 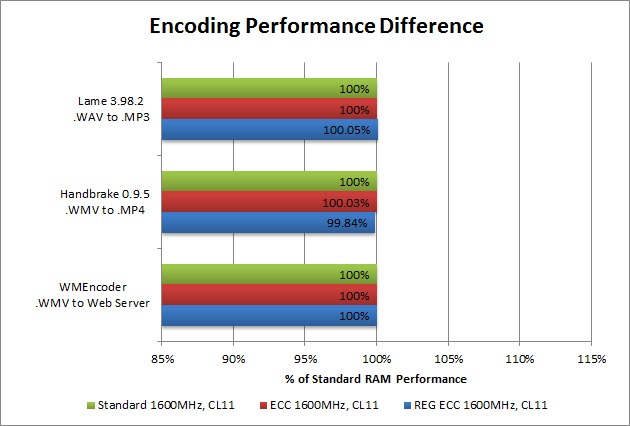 These results really couldn't be any closer together than they are. At least for these three programs, the supposed performance loss of ECC memory simply is not a factor.

Overall, there is about a 1% total variance in performance across the three types of RAM. However, if you look at the individual benchmark results, you will see that the majority of this difference comes from just two effects - Extrude and Ink Outlines. For some reason, Standard RAM performed slightly slower when applying the Extrude effect and ECC RAM performed slightly slower when applying the Ink Outlines effect.

Just like Unigine Heaven Pro 4.0, we ended up running this benchmark a ton of extra times to make sure we didn't have a weird outlier but we kept coming up with the exact same results. Since pretty much all of the performance difference came from those two outliers, we would actually say that Photoshop CC shows little, if any, performance difference with ECC or Registered ECC memory despite what the total benchmark results indicate.

Top benchmark Adobe Premiere Pro CC, we used the PPMB6 benchmark. This benchmark encodes a number of different timelines using a variety of encoding methods. It also includes a set of benchmarks that compare the time it takes your system to encode a timeline with GPU acceleration both on and off.

Unlike Photoshop CC, there are no outliers to confuse our results. The largest performance difference we saw was only about .1% which is more than small enough for us to attribute to normal testing variations. So for video encoding, the RAM type made absolutely no difference at all.

While it is true that you can get standard RAM that runs at a higher frequency or with tighter timings than ECC or Registered ECC memory, when simply comparing ECC to non-ECC memory our benchmarks have shown that the performance difference is almost negligible. In fact, if you compile all the results from our testing you end up with the following chart:

In the real-world benchmarks (Audio encoding, Photoshop CC and Premiere Pro CC), there was little if any drop in performance with either ECC or REG ECC memory. In fact, they actually benchmarked better than standard memory in many cases. Overall, ECC RAM was just .25% slower than standard RAM and Registered ECC RAM was .44% slower. This means that, on average, the performance loss from using either ECC or Registered ECC memory is tiny and certainly nowhere near the claimed 2% that we have seen online.

Of course, this is merely a sampling of the nearly unlimited number of programs that you can run on your computer. The outliers alone indicate that there will be programs that see a noticeable drop in performance with ECC or Registered ECC memory. However, for the majority of programs and situations, the small drop in performance is likely going to be so little that without specific benchmarking you would never be able to tell.

If you absolutely need the fastest system possible and if fractions of a percent actually do make a difference, then ECC might not be right for you. But our testing has only furthered our belief that in any other situation, ECC memory is simply a better choice than non-ECC memory due to its incredible reliability with only a tiny loss in performance.