Intel has just released an update to their mainstream Core processor series, marking the 8th generation of CPUs in this lineage. These are also the first mainstream processors to have more than four cores, even while maintaining high per-core clock speeds. As with any new launch in this segment, we want to see how well these new chips perform on a variety of applications. This article will focus on Autodesk Revit 2018, and compare the new models to the previous-generation Intel offering as well as a couple of AMD CPUs.

To see how the different new Intel CPUs perform in Revit 2018, we used the following configurations:

These test configurations include three of the new Coffee Lake CPU models, the top of each tier (Core i3, i5, and i7) - as well as the previous top mainstream processor from Intel, the Core i7 7700K, which has been our go-to recommendation for Revit for several months. A couple of AMD's Ryzen chips in the same general price range are also included for reference.

We performed our testing using a near-final beta of the terrific RFO Benchmark. It is being updated to support Revit 2018, and while the version we used is not quite ready for public consumption the "Full_Standard" variant of the test worked just fine for us. Within the RFO Benchmark, the results are broken down into the following categories:

The variant of benchmark we used performs three runs of each test and then averages the results. Those results are presented below.

Here are the results of the RFO Benchmark, on the six CPUs we tested. They have been normalized to the Core i7 7700K as a baseline: 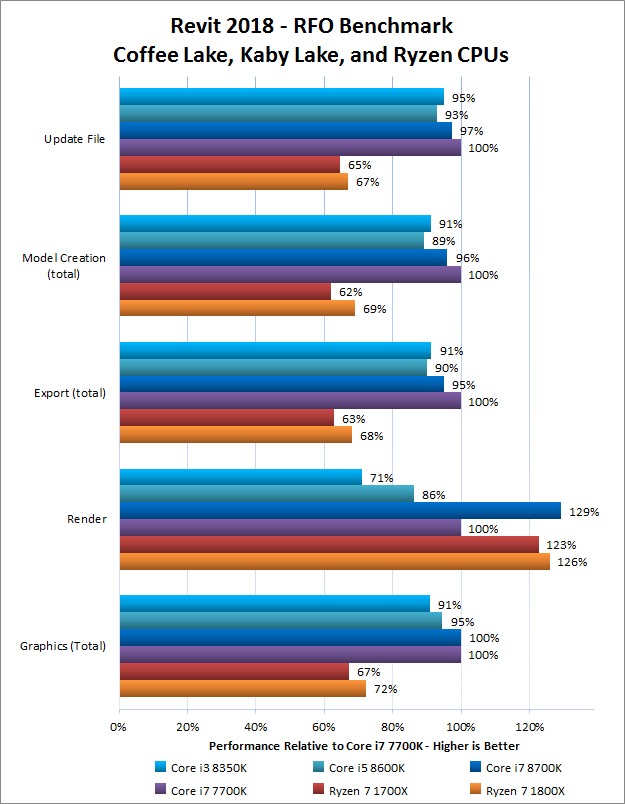 Despite the high clock speed of the new Coffee Lake processors, all three of them trail the older i7 7700K - but only by a few percent. The top-end 8700K is 3-5% behind in the Update, Model Creation, and Export tasks, which clearly are not utilizing more than four threads (and probably even fewer). It pulls even to its predecessor in the Graphics tests, and then jumps ahead by a wide margin in rendering. AMD's Ryzen processors also do well with rendering, but they fall a lot further back in every other part of the benchmark.

Just going off specs, it seems like the Ryzen chips are scoring lower than I would expect them to... so there may be some underlying optimization within Revit that benefits the 7700K and not AMD's models. It is possible that the new Coffee Lake chips are similarly affected, but the only way we will know for sure is if performance changes substantially in future versions of Revit.

Here is a summary of the longer chart above, with most of the tests compressed into one category - but rendering still separated: 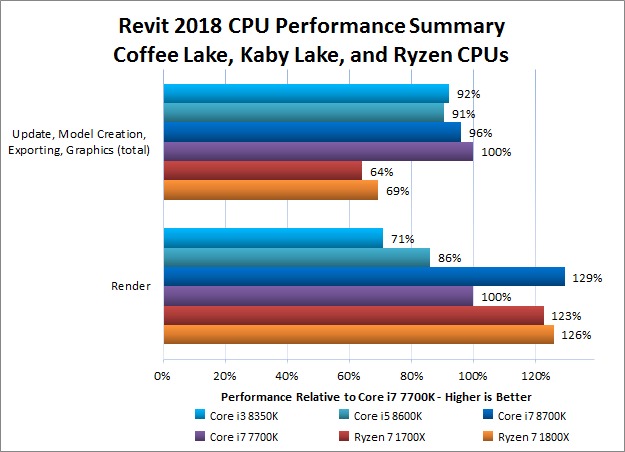 Despite a very small drop in general Revit performance, it looks like Coffee Lake processors - in particular, the Core i7 8700K - are going to be worthwhile. The 4% average loss in general performance will be almost impossible to notice, but the near 30% improvement in rendering speed is substantial. It would be nice if there was a CPU in this new generation that more closely matched the older 7700K, but there is no 4-core / 8-thread model this time around, and older CPUs are not compatible with the latest Z370 motherboards.

Hopefully, software developers like Autodesk will continue to improve multi-threading in their applications as well, which could allow the new 6-core chips to be even faster in the future.