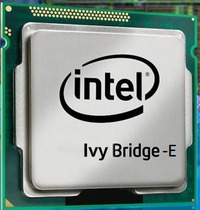 With Ivy Bridge-E, Intel is finally moving their enthusiast CPUs to their newer 22nm manufacturing process. While this does not greatly increase the raw frequency that the CPUs are able to run at, it does allow them to draw less power while doing so. In addition to the smaller manufacturing process, the new line also has more L2 cache per core and improved memory support.

These new CPUs will function in all of the current generation of socket 2011 motherboards although a BIOS update is generally required. In fact, unlike most new CPU lines from Intel there is not an accompanying chipset update.

At launch, the following CPUs will be available:


If you are familiar with the current Sandy Bridge-E CPUs, this chart likely looks very lackluster. There is the normal .1-.2 GHz frequency bump, but the cores, Smart Cache and thermal output has not changed at all. The only real interesting thing is that all of the models have unlocked multipliers now, so you can overclock even with the "low-end" i7-4820K.

The big differences between Ivy Bridge-E and the previous generation Sandy Bridge-E come when we take a look at the detailed features.

Below is a quick breakdown of some of the major features of Ivy Bridge-E versus the previous generation Sandy Bridge-E with the notable features in red:

*will likely rise with future models

There are really only five things to discuss, each of which has been marked red in the chart above. Starting at the top, Ivy Bridge-E has an additional 128KB of L2 cache per core. This should result in slightly better performance, but likely will not be a game changer in most scenarios. Next, all of the Ivy Bridge-E CPUs at launch have a TDP of 130W. This was also the case for Sandy Bridge-E when they were first launched, however, so we would not at all be surprised to see a faster model come out in the future that has a higher TDP.

The two big improvements for Ivy Bridge-E is the support for faster memory and the manufacturing process being reduced to 22nm. The memory support is simply an overall good thing. DDR3-1600MHz RAM will still be very popular due to how rock solid it currently is, but having the option to use faster RAM is always a good thing. The manufacturing process reduction is also a solely good thing as it should help reduce both power draw and heat output. The weird thing is that Intel is still listing the TDP at 130W, even though previews of the i7-4960X show that it has a lower overall power draw than the i7-3960X.

The big disappointment with Ivy Bridge-E isn't even something with the CPU, but the fact that Intel is not releasing an updated chipset in conjunction with the new CPUs. While the X79 chipset is great, it is certainly showing its age as it only has two SATA 6GB/s ports and no native USB 3.0 support.

While there are a few key improvements in the new Ivy Bridge-E architecture, it is not very likely that many consumers are going to feel the need to upgrade from Sandy Bridge-E. The performance bump is minimal and the lack of a new chipset means that you won't get many new features. If you are in the market for a new system, however, Ivy Bridge-E does have a few things that makes it just a bit more attractive than Sandy Bridge-E.

While the frequency bump isn't huge, it is certainly still there and with the newer architecture these CPUs should perform roughly 5% faster than their Sandy Bridge-E equivalents. The maximum RAM frequency bump to 1866MHz is also a great little perk that will allow those that need faster memory speeds to get a bit better performance out of their system. Note that in our testing, RAM speed has very little (if any) effect on tasks such as gaming or Photoshop.

One of the biggest draws of Ivy Bridge-E comes as a result of the smaller manufacturing process. This allows the CPU to operate just as fast, but use less power and thus require less (or quieter) cooling.