Whether AMD or Intel is the faster option for you is in many cases going to depend on your specific workflow in Lightroom Classic. Intel maintains a small lead for active tasks like culling and switching modules, while AMD now has a solid ~10-15% lead for passive tasks like exporting and generating previews.

In Lightroom Classic, we expect these new CPUs to do very well since AMD has advertised up to a 13% IPC (Instructions Per Clock) performance improvement over the previous generation, which should translate well into real-world performance. In addition, we found that DDR5 gave a decent boost to the Intel Core 12th Gen CPUs, so we also expect to see a similar benefit for the AMD Ryzen 7000 processors.

Over the last few years, AMD and Intel have been trading places as the fastest option for Lightroom Classic, with Intel holding a slight lead at the moment with their Core 12th Gen processors. That lead is fairly slim, however, giving AMD a good chance to pull ahead with their Ryzen 7000 Series processors. 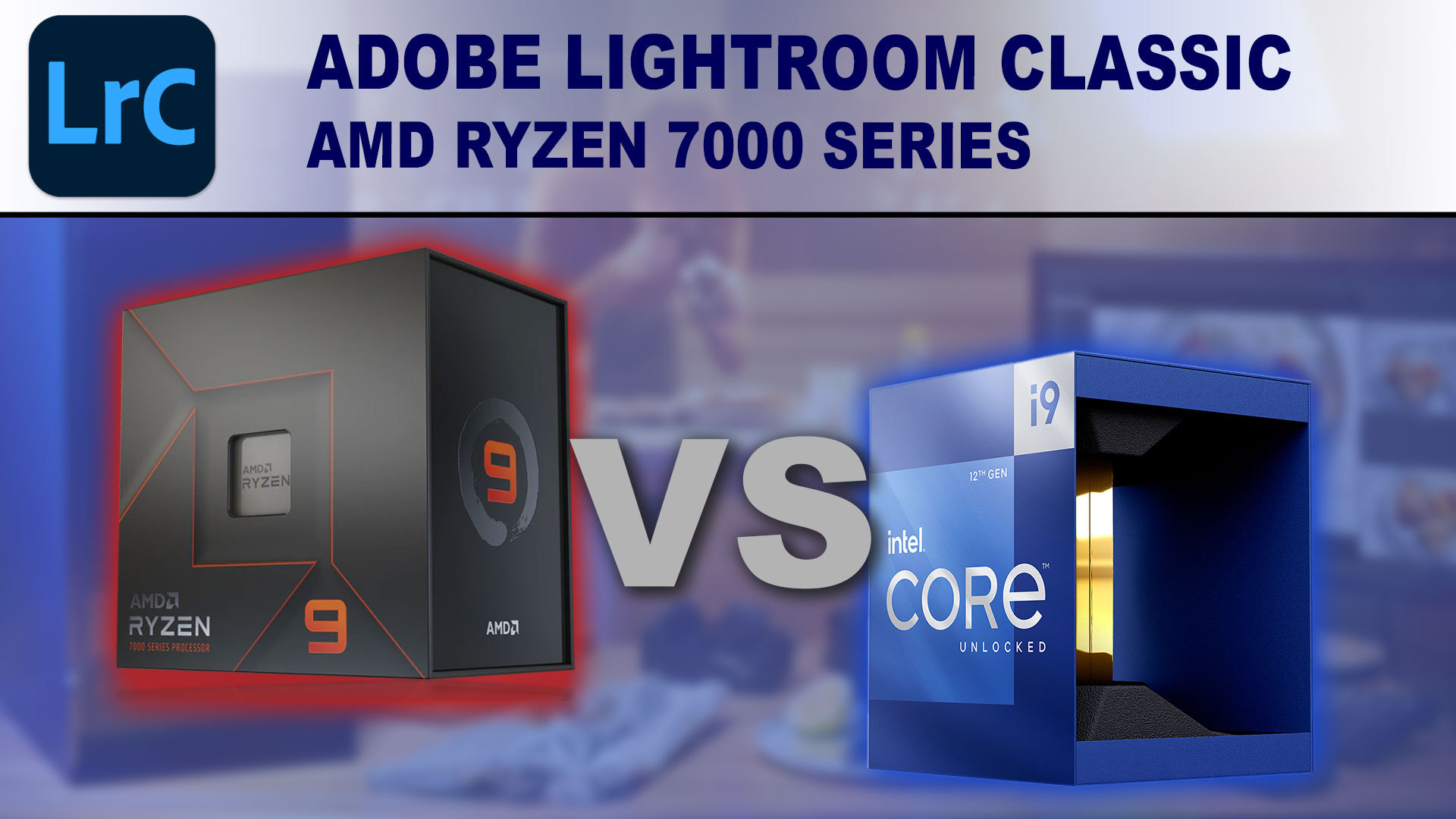 In this article, we will be using our PugetBench for Lightroom Classic 0.93 benchmark paired with Lightroom Classic 11.5 to examine the performance of the new AMD Ryzen 7000 Series CPUs. As a comparison, we will be including the previous generation AMD Ryzen 5000 Series, as well as their primary competition – the Intel Core 12th Gen processors. While we are including most of the primary models from each of these product lines, note that we are skipping the AMD Ryzen 7 5800X3D which features AMD's 3D V-Cache Technology. We have looked at this model in past articles, and found that for content creation, it is either on par or slower than the normal Ryzen 7 5800X model.

If you want to read more about the new AMD Ryzen 7000 Series and what sets them apart from the previous generation, we recommend checking out our main AMD Ryzen 7000 Series Processors Content Creation Review article. That post includes more detailed information on the CPU specifications, testing results for a range of other applications including Photoshop, Premiere Pro, After Effects, and Unreal Engine; as well as all the test setup details for both the hardware and software used in our testing. 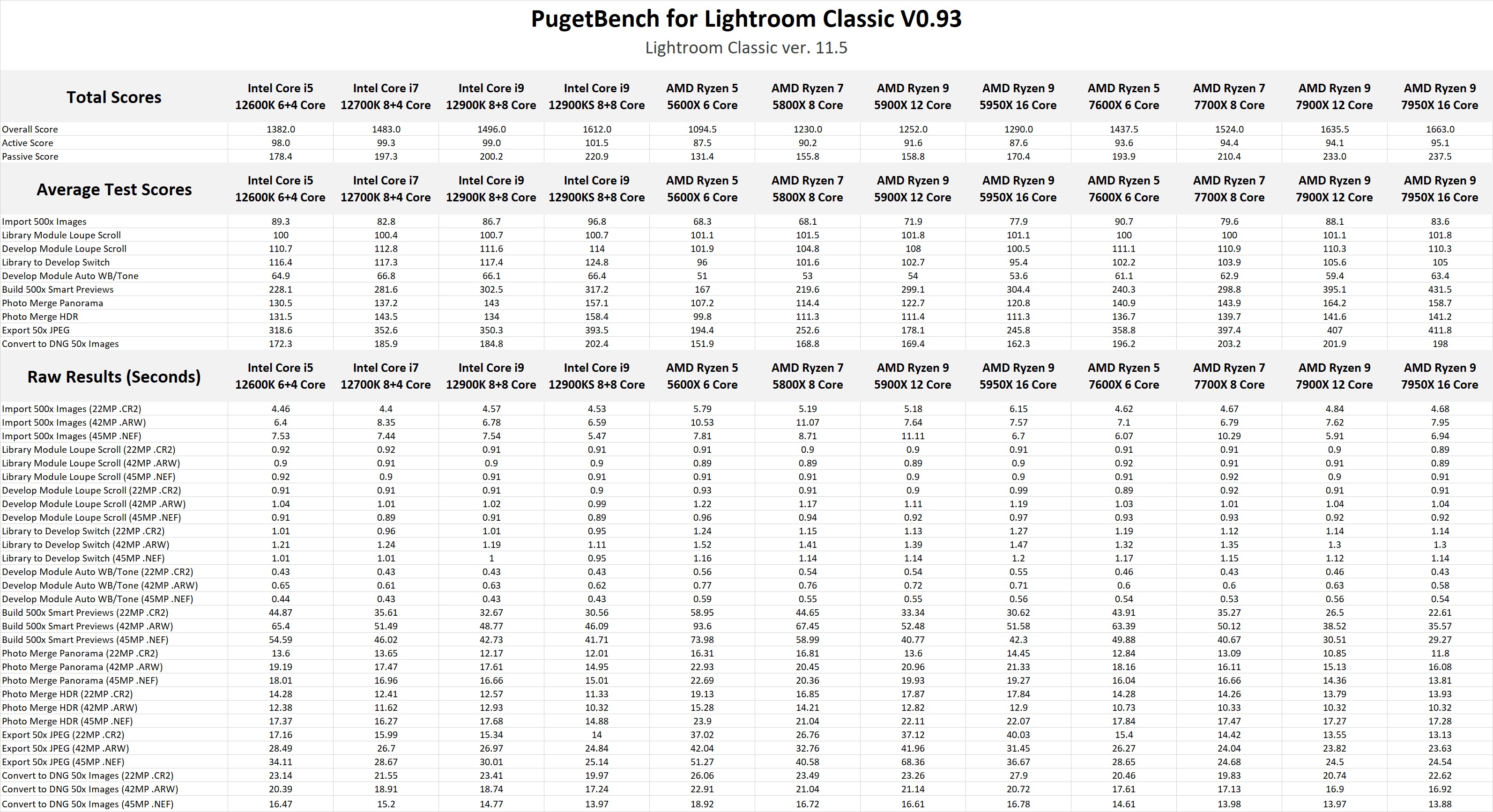 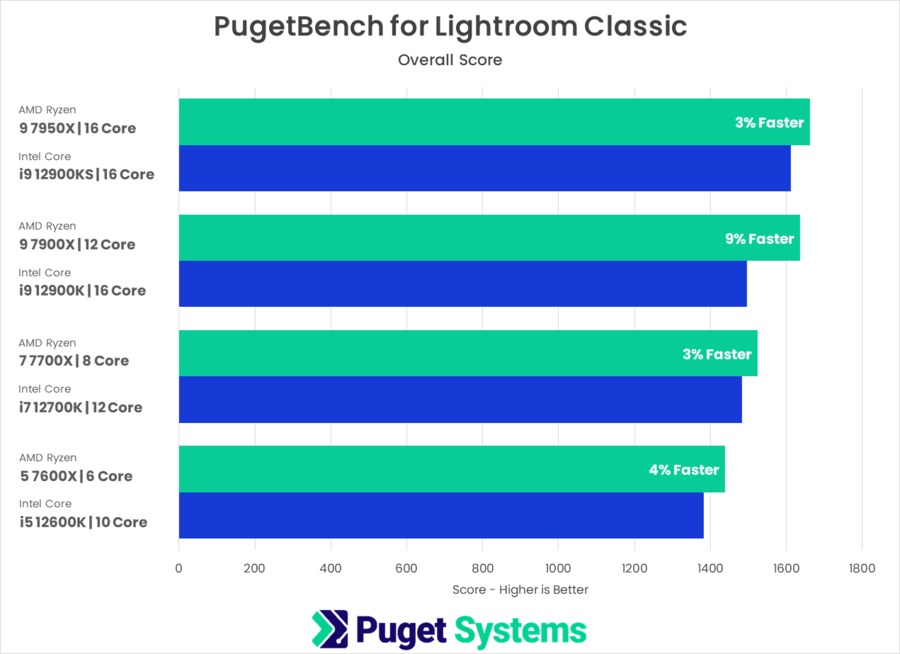 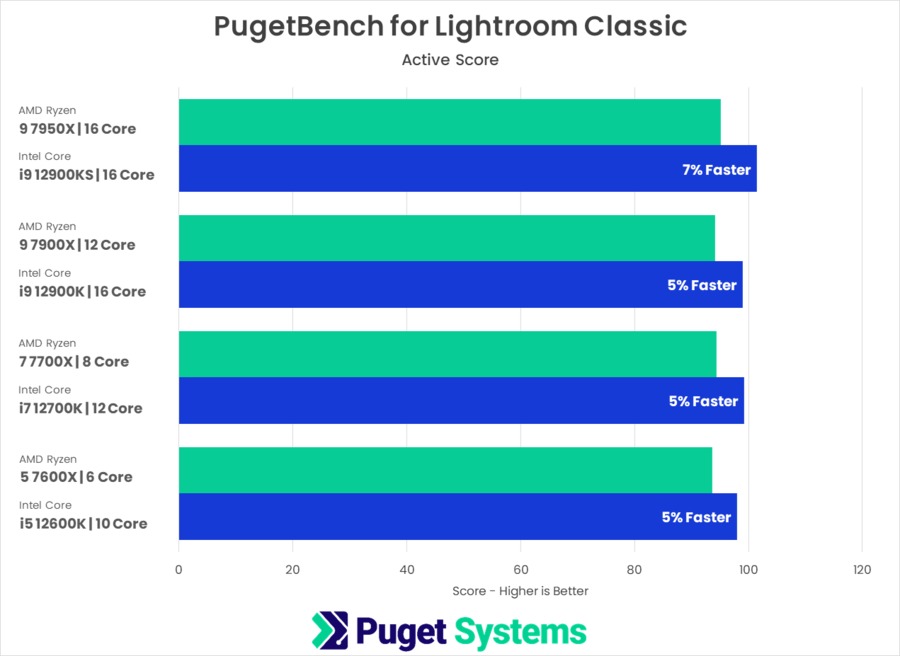 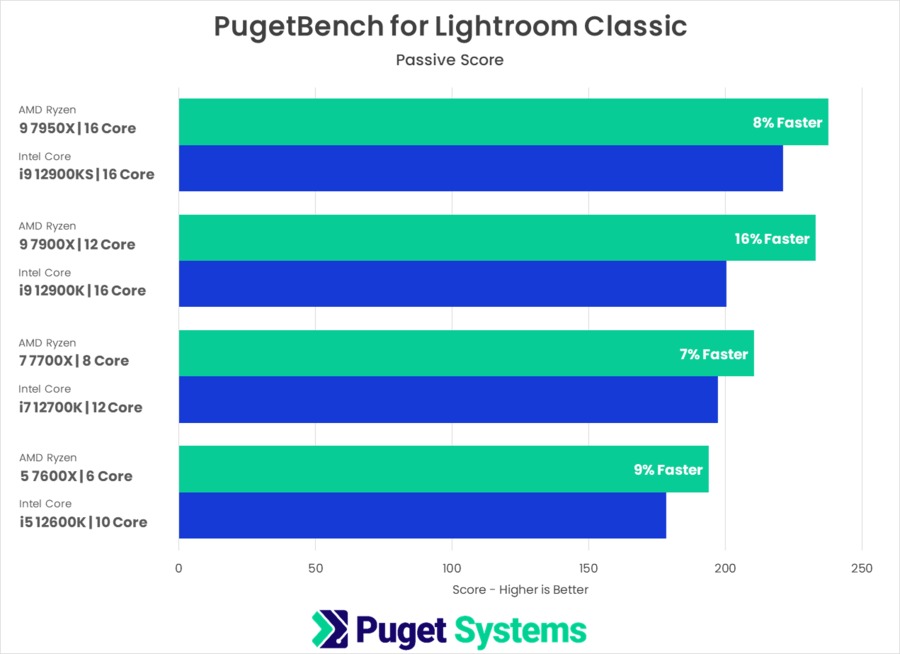 In every case, the new Ryzen 7000 processors are faster than their Intel Core 12th Gen counterparts, although in most instances the difference is only a few percent. The only model that is significantly faster is the Ryzen 9 7900X, which came in at about 9% faster than the Core i9 12900K.

However, this isn't actually an across-the-board win for AMD. If you switch to the second chart, we are showing the performance for active tasks like scrolling through images, switching modules, and other quick tasks. These tend to be more lightly threaded, which is still a strong point for Intel despite the IPC improvements AMD made. The difference is minor, but for these tasks, Intel maintains a slight lead.

Passive tasks like exporting and generating previews, on the other hand, favors the new AMD processors by a decent margin. In general, most of our customers tend to prioritize having more performance for active tasks, but the new Ryzen 7000 Series processors were between 7% and 16% faster than their Intel Core counterparts for these passive tasks.

Overall, choosing between Intel and AMD is likely going to come down to your specific workflow. If you often are performing a task that takes several minutes to complete, the AMD Ryzen 7000 Series should be a decent amount faster than Intel. On the other hand, if most of your time is spent culling, making adjustments, and jumping around inside Lightroom Classic, the Intel Core 12th Gen processors have a very slim lead over AMD. 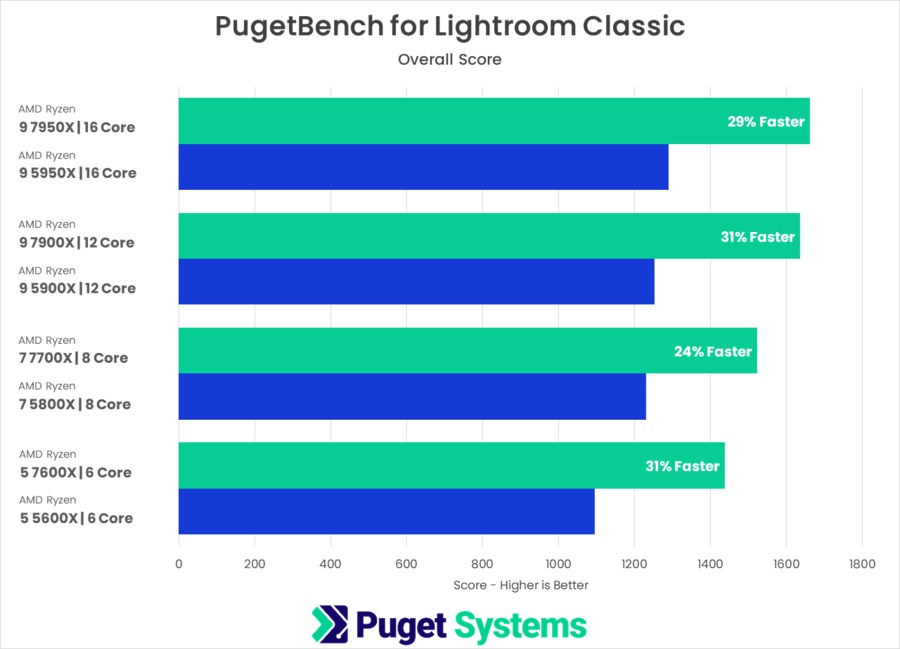 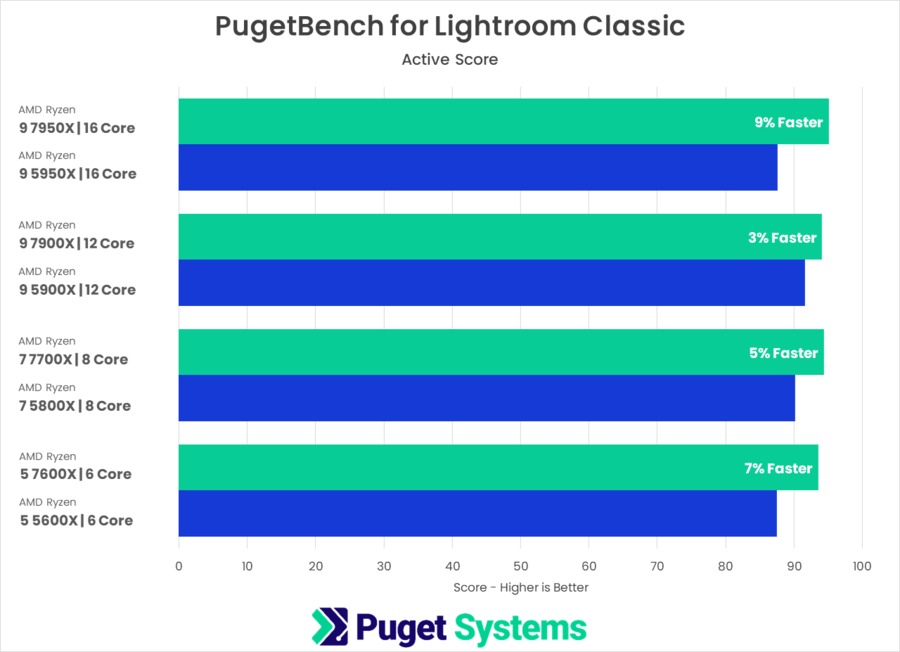 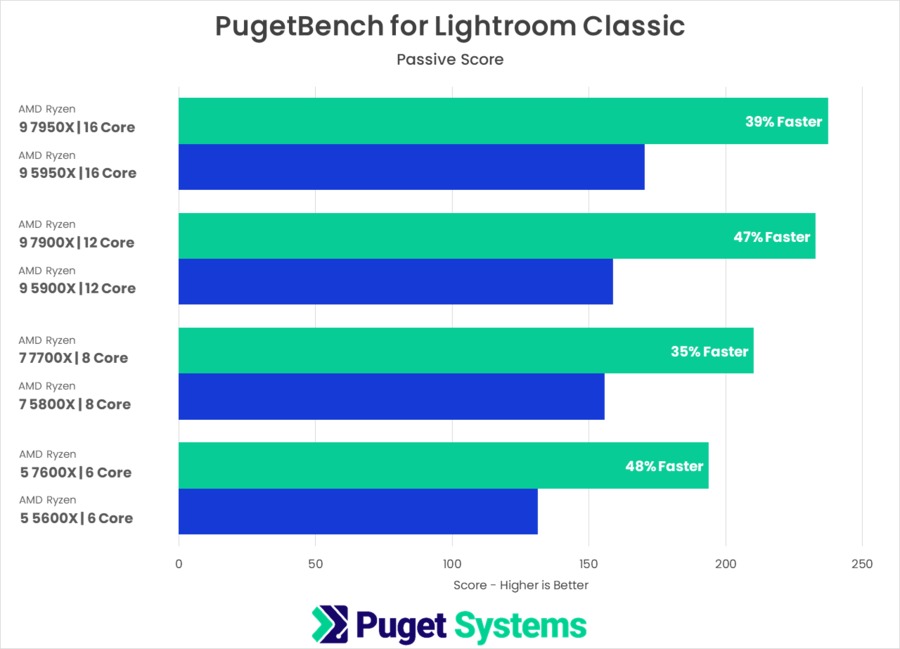 In the previous section, we saw that the new AMD Ryzen 7000 Series processors took the overall lead over Intel's 12th Gen models, but what it doesn't show is just how much of an improvement that is for AMD over the previous generation. And boy, did AMD make some big improvements!

As you can see in the chart above, AMD made huge strides with the 7000 Series, showing overall around 25-30% higher performance in Lightroom Classic compared to the previous generation Ryzen 5000 Series. The majority of this came from passive tasks like exporting, where the Ryzen 7000 series were up to nearly 50% faster than the Ryzen 5000 series! However, they were less than 10% faster for active tasks, which balances out the gains quite a bit in an overall sense.

No matter how you slice it, this is a massive performance gain over a single generation, and the main reason why AMD was able to take a slight lead over the Intel Core 12th Gen processors.

How well do the AMD Ryzen 7000 Series CPUs perform in Lightroom Classic?

Whether AMD or Intel is the faster option for you is in many cases going to depend on your specific workflow in Lightroom Classic. Intel maintains a small lead for active tasks like culling and switching modules, while AMD now has a solid ~10-15% lead for passive tasks like exporting and generating previews.

However, it is worth pointing out that Intel is expected to launch their new Core 13th Gen processors sometime later this year, with some sites like Tom's Hardware speculating that they could launch as early as October. We won't know how those upcoming Intel processors will perform until they are released, but given the short timeframe we are likely dealing with, it may be worth holding off on purchasing a Ryzen 7000 (or an Intel Core 12th Gen) processor for a little bit if you can. Considering how close the AMD Ryzen 7000 and Intel 12th Gen processors often are for Lightroom Classic, it may end up that Intel will be able to make a strong comeback with their upcoming 13th Gen processors.

Keep in mind that the benchmark results in this article are strictly for Lightroom Classic and that performance will vary widely in different applications. If your workflow includes other software packages, we highly recommend checking out our AMD Ryzen 7000 Series Processors Content Creation Review article which includes results and links to in-depth testing for a range of other applications including Premiere Pro, After Effects, Photoshop, DaVinci Resolve, and Unreal Engine.