Skip to content
Always look at the date when you read an article. Some of the content in this article is most likely out of date, as it was written on June 5, 2019. For newer information, see our more recent articles.

RealityCapture, like other photogrammetry applications, is built to take a batch of photographs and turn them into digital, 3D models. The many steps involved in that process can take a lot of time, and utilize both the CPU and GPU at different points. We recently put together a benchmark tool for RealityCapture, and after looking at processor performance last week we are now diving into a comparison of the current NVIDIA GeForce and Titan video cards.

Since RealityCapture uses CUDA, only NVIDIA cards will work – and indeed, such a video card is required for this program to run fully.

Here is a list of the hardware we tested RealityCapture on. The CPU and RAM capacity were kept the same across all test runs, to avoid either of those throwing off the comparison, and we used the Core i9 9900K because it turned in the best performance in our recent CPU article. All results included here are from after the recent Windows 10 security patch addressing MDS vulnerabilities in some Intel processors, but we did see a small increase in Core i9 9900K performance when we moved to the newer Z390 motherboard – which helped offset some of the performance that chip lost because of the update.

Each image set was processed 2-3 times on each GPU, and the fastest overall result was used for the comparisons below.

Here are charts for each of the four image sets, showing the total time (in seconds) they took to process on each GPU. The video cards are listed in the same order on all charts, regardless of performance, to make it easy to see how they stack up. The fastest result on each project is highlighted (bold) to ensure it stands out from the crowd, but it turns out that may not have been necessary. 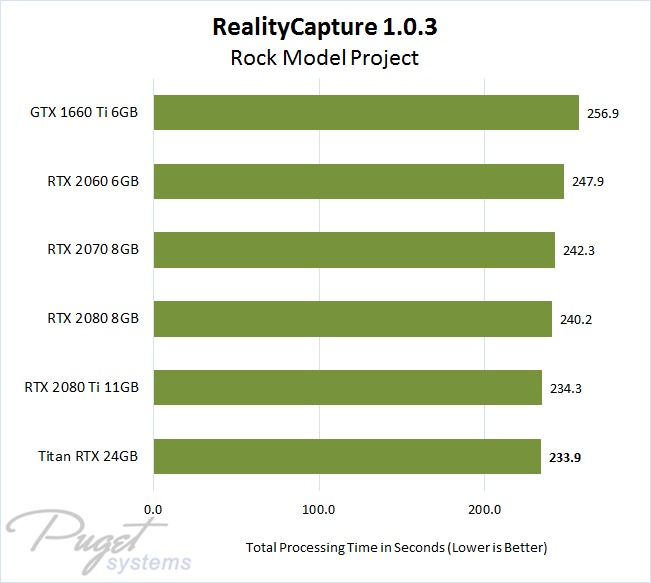 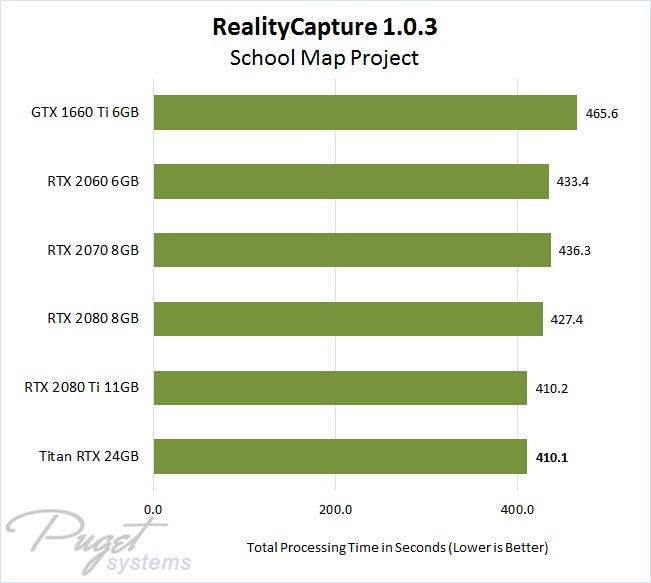 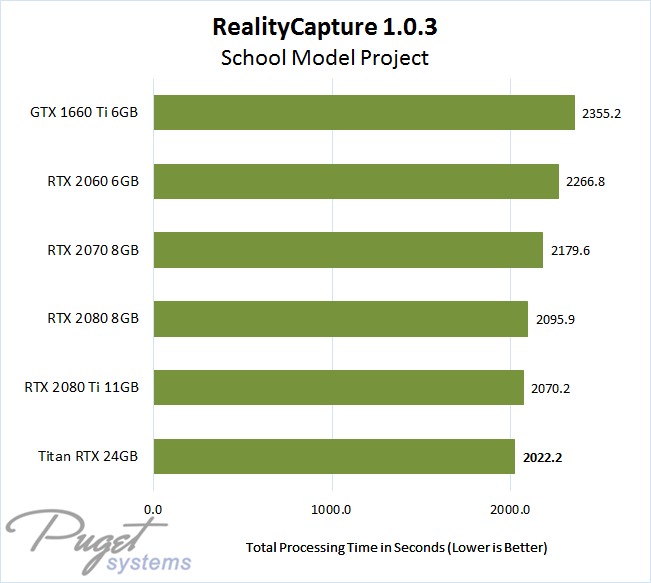 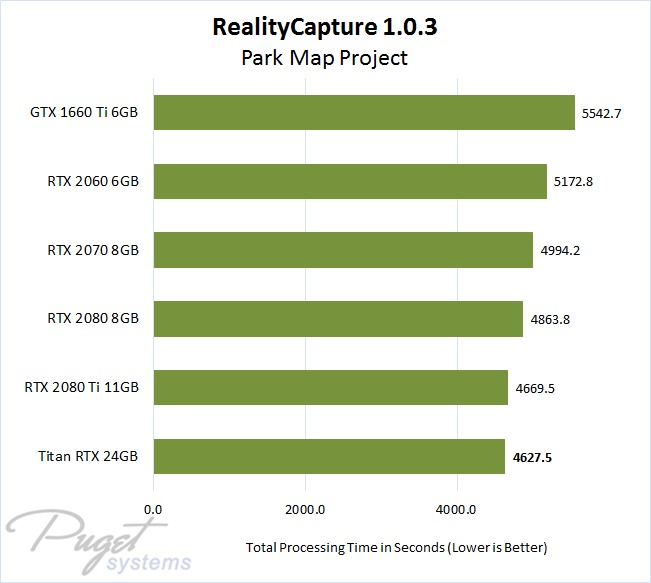 For those who want to dig further into the differences in how each GPU performs, here is a table showing the times for each step within RealityCapture on each of the image sets: 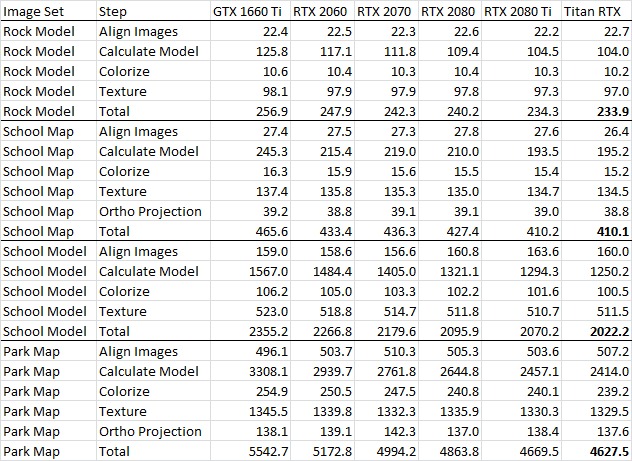 GPU selection appears to have a fairly small, but still measurable, impact on RealityCapture's performance. Across cards ranging from ~$300 to $2500 in price, there was a spread of 10-20% performance difference. The Titan RTX did come out with the fastest times across the board, but sometimes only by fractions of a second. All in all, reducing processing speeds in RealityCapture by upgrading the video card is an option – but a costly one, considering the modest gains as you go from one card to the next.

What about multiple video cards, though? How viable is that path to increasing performance in RealityCapture? 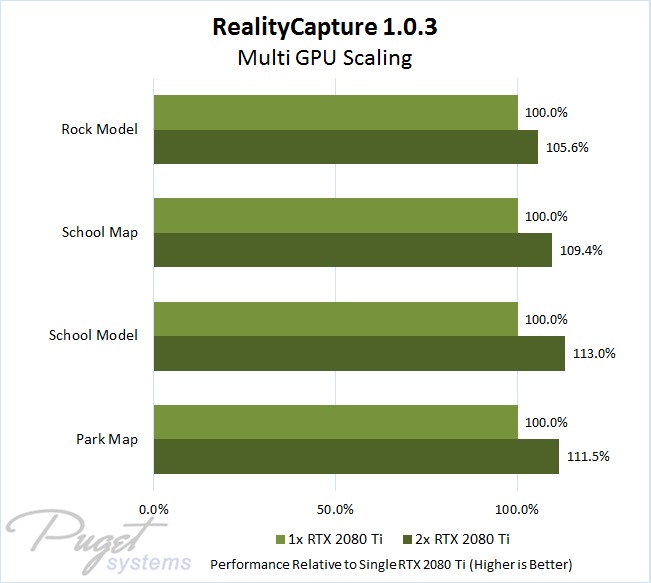 Doubling up on video cards provides a 5-13% boost in processing speed in RealityCapture, which is not too shabby considering the incrimental differences we saw earlier from one card to the next. In fact, at some price points this means that two video cards would be a better choice than a single, faster, and more expensive card. For example, check out how two GeForce RTX 2080 Ti cards (2 x $1199 MSRP) best a single Titan RTX ($2499 MSRP) for about the same price: 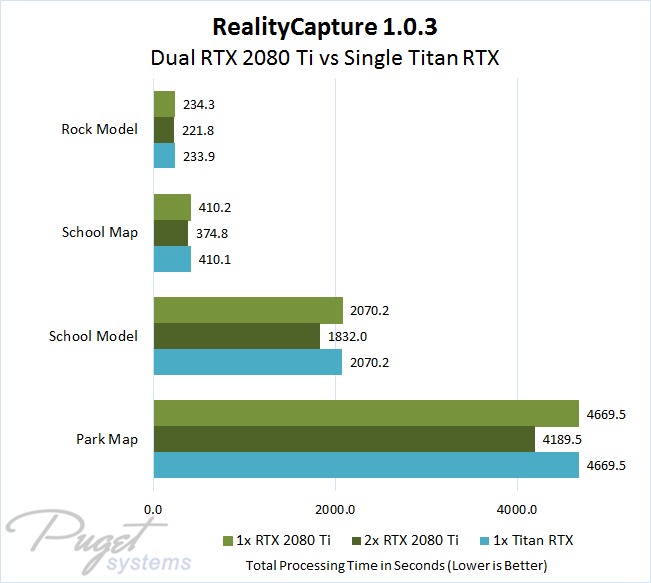 All of the NVIDIA graphics cards we tested with RealityCapture worked well, so in the end your choice should probably come down to budget. In some situations, spending a little more can get you a nice boost – like moving from the GTX 1660 Ti to the RTX 2060, which are less than $100 apart and represent the biggest jump in performance for your dollar among the models in this roundup.

As you go higher, and cards get more expensive, opting for two less expensive video cards instead of one higher cost GPU is often going to be the best value. It is entirely possible that three or four video cards would further increase GPU speeds in RealityCapture, but going beyond the two we tested here would require using a bigger chassis and power supply (which further increases cost) and potentially a different CPU, which would lead to an overall reduction in performance instead of an improvement.