For most users, After Effects is going to be CPU bottlenecked long before the performance of your GPU comes into play. But in certain situations, the new AMD Radeon 6800 and 6800 XT can be around 30% faster than the Radeon 5700 XT or Vega 64. However, this isn't enough to quite catch up to the NVIDIA RTX 3000 series cards, so unless you need the 16GB of VRAM, NVIDIA continues to hold the lead in terms of After Effects performance.

Recently, AMD launched their new Radeon RX 6800 and 6800 XT GPUs and while supply has been especially tight, we have finally managed to get our hands on a pair of cards courtesy of our friend Brian Stroh at BPS Customs. AMD has advertised very large performance gains with these cards, although gaming has been AMD's focus for the Radeon series of cards for the last few generations so we don't quite know what to expect in professional applications like After Effects.

While the number of GPU accelerated effects in After Effects has increased in recent years which has made the GPU increasingly important, most of After Effects is still limited by the performance of your CPU. In the past, however, there was a small benefit to using an NVIDIA GPU over AMD, so it will be interesting to see if this continues to hold true or if the new Radeon RX 6800 and 6800 XT GPUs allow AMD to match or beat NVIDIA in After Effects. 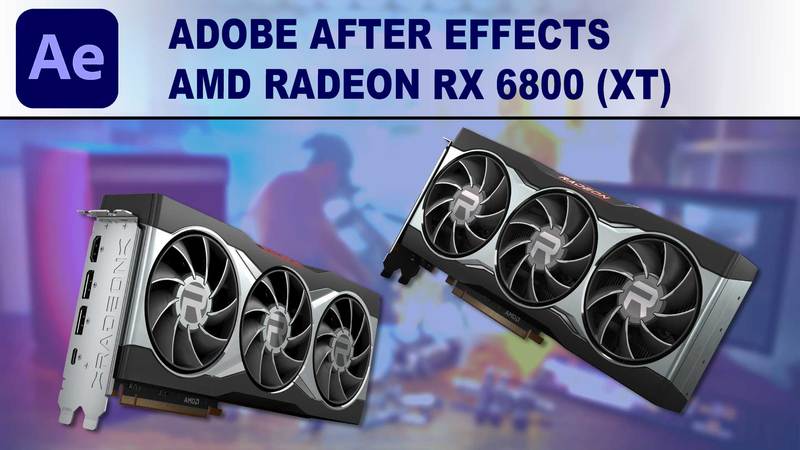 While specs rarely line up with real-world performance, it is nice to see AMD including 16GB of VRAM on the new 6800 cards. This really shouldn't be necessary for After Effects, but it can make a difference if you also use your system to edit 8K timelines in programs like DaVinci Resolve Studio.

From a pricing standpoint, these cards are right in between the NVIDIA RTX 3070 and 3080 - although currently, supply is so poor that you will be lucky to find a card for anywhere near the MSRP price. However, we typically use the MSRP as a baseline for price in order to rule out fluctuations due to different brands, sales, and scarcity. This means that from a performance perspective, we will be primarily looking to see if these cards are able to out-perform the RTX 3070 and whether or not they can beat the more expensive RTX 3080.

To test each GPU, we will be using the fastest platform currently available for After Effects - most notably the AMD Threadripper 3960X. Since After Effects utilizes the CPU so heavily, this should minimize the impact of the processor and allow each GPU to perform at their fullest potential.

One thing to note is that due to the rolling GPU launches from NVIDIA and AMD, we will be re-using many of the results from our
Adobe After Effects - NVIDIA GeForce RTX 3070, 3080 & 3090 Performance article, which is why we are not yet using the latest version of Photoshop (22.0). Our current plan is to re-do all our GPU testing with the latest version of After Effects once AMD launches the Radeon RX 6900 (XT) in December (assuming we can get our hands on them before 2021).

Looking at the overall performance, the new AMD Radeon 6800 and 680 XT do just fine, although they were technically 2-3% slower than the RTX 3070 and 3080. This isn't much of a difference and is right at the margin of error for real-world testing like this, so from an overall sense, they are effectively tied with NVIDIA's latest RTX 3000 series cards.

Compared to the older Radeon RX Vega 64, the new cards are around 4% faster which is just enough for us to say for certain that they are definitely faster than the older Vega series of cards. Compared to the less expensive Radeon RX 5700 XT, the Radeon RX 6800 and 6800 XT are both a slightly higher 6% faster. These numbers go up a bit if you only look at the RAM Preview and Rendering results, and for those tests, the new cards are up to 8% faster than the 5700 XT in an overall sense.

However, if we examine our "GPU Stress" project by itself (which pushes the GPU as much as is realistic in After Effects), we can get a better look at how the Radeon 6800 (XT) compares when the GPU is playing a more central role: 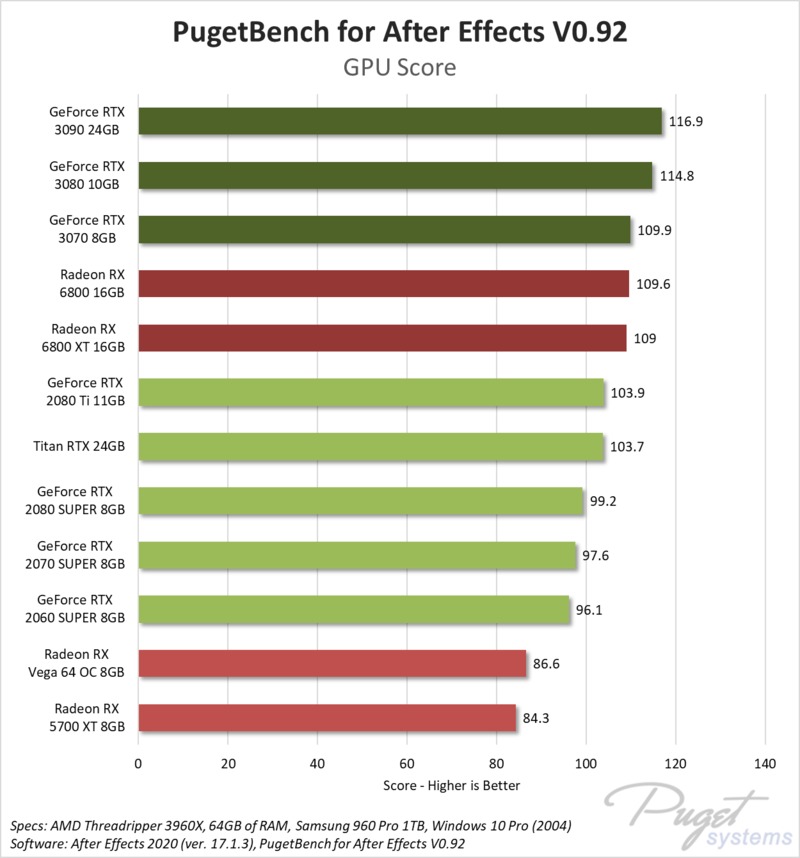 In this composition, we actually see a huge bump in performance with the new AMD Radeon 6800 cards. There isn't much of a difference between the 6800 and 6800 XT, but both are close to 30% faster than the Radeon Vega 64 and 5700 XT. That is a terrific performance gain from a single generation and out-paces the 6-13% performance gain we saw with NVIDIA's new RTX 3000 series over the previous RTX 2000 series cards.

Unfortunately, even this 30% performance gain isn't enough to quite catch up to the NVIDIA RTX 3000 cards. The Radeon 6800 and 6800 XT do effectively match the RTX 3070, but since that card has an $80 lower MSRP, this is still a solid win for NVIDIA unless your workflow can make use of the larger 16GB of VRAM that the Radeon 6800 cards have.

For most users, After Effects is going to be CPU bottlenecked long before the performance of your GPU comes into play. But in certain situations, the new AMD Radeon 6800 and 6800 XT can be around 30% faster than the Radeon 5700 XT or Vega 64. However, this isn't enough to quite catch up to the NVIDIA RTX 3000 series cards, so unless you need the 16GB of VRAM, NVIDIA continues to hold the lead in terms of After Effects performance.

Another factor you may want to keep in mind is GPU support in rendering engines like OctaneRender, V-Ray Next, and RedShift. Even if you do not use these engines today, After Effects has been indicating a trend towards using them more heavily in the future - especially since RedShift was acquired by Maxon (which has tight integration with Ae through Cinema4D). If you do any 3D work (or plan to), it is likely that you will be using one of them in some capacity in the future.

Unfortunately, many of the most popular 3rd party rendering engines for After Effects currently only support NVIDIA cards. Many of them have publicly stated that they plan to add support for OpenCL (and thus AMD) in the future, but at best this support is in the beta stage right now. So, while NVIDIA may have a slight lead in terms of straight performance at the moment, depending on your workflow and what updates Adobe may make to Ae in the near future, NVIDIA may be an even better choice from a future-proofing standpoint.

As always, keep in mind that these results are strictly for After Effects. If you have performance concerns for other applications in your workflow, we highly recommend checking out our Hardware Articles (you can filter by "Video Card") for the latest information on how a range of applications perform with the new AMD Radeon 6000 series GPUs, as well as with different CPUs and other hardware.