Pix4D is an advanced photogrammetry application, suited to a wide range of uses, with a focus on handling images captured by drones. Processing of those images into point clouds and 3D meshes/textures is time-consuming, heavily utilizing a computer's CPU and GPU. We have recently updated our benchmark tools for Pix4D, and published articles looking at CPU and GPU performance on version 4.3 – but in the midst of our testing, version 4.4 was released. Now it is time to see if that update had any impact on performance that might alter our recommendations.

Here is a list of the hardware we tested Pix4D 4.4 on. We used two different configurations, utilizing processors which we found to offer very good performance in Pix4D 4.3 and representing both of the major CPU manufacturers. The video card and RAM capacity were kept the same across both platforms and software versions, to avoid either of those throwing off the comparison.

Each image set was processed 2-3 times on each version of Pix4D, and the fastest overall result was used for the comparisons below.

Here are charts showing the performance impact that updating to Pix4D 4.4.12 had on the Intel Core i9 9980XE. The newer software version is shown in a darker color, and there are graphs showing raw processing time (in seconds) as well as relative performance. 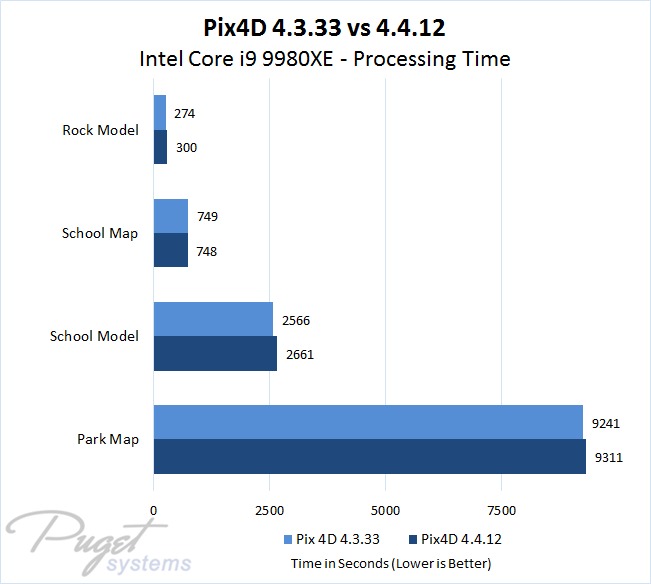 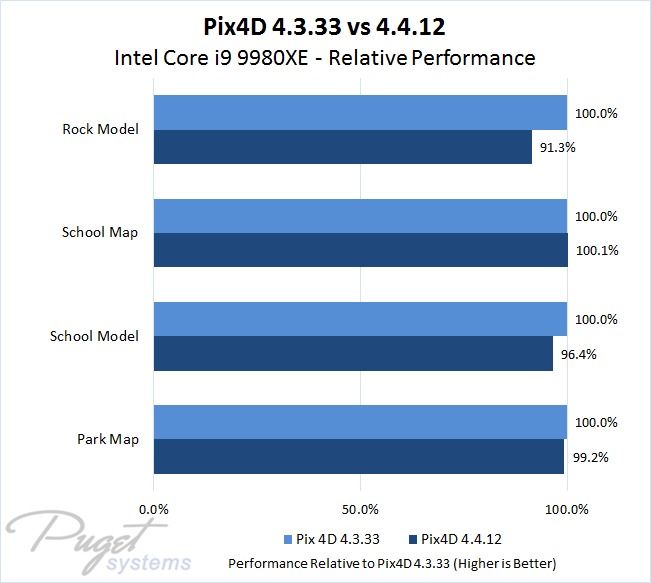 And here are charts showing Pix4D 3.3.33 versus 4.4.12 performance on AMD's Threadripper 2990WX. Again, the newer software version is shown in a darker color – and there are graphs showing raw processing time (in seconds) as well as relative performance. 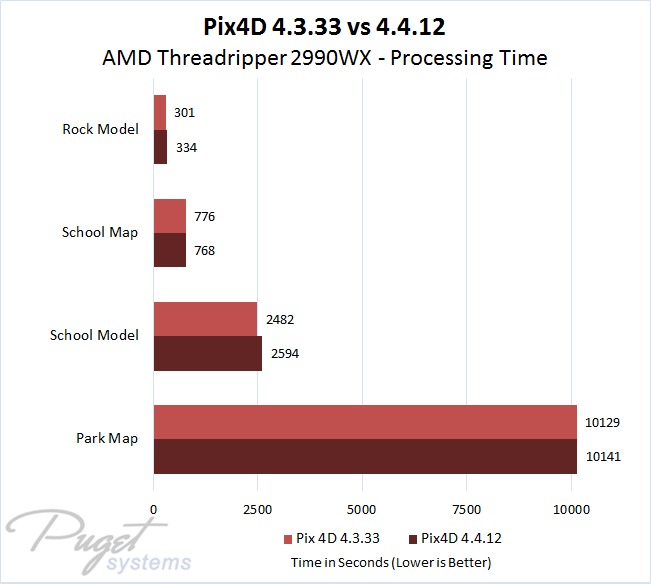 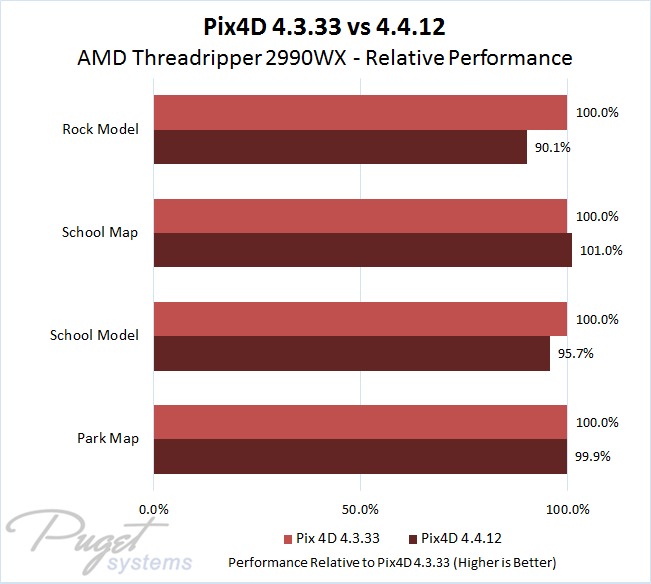 It looks like performance in Pix4D 4.4.12 is actually a bit slower than in the previous release – particularly when processing 3D Models. To dig a little deeper into what is going on, here is a table showing how long each step took on each combination of CPU and version:

It looks like the bulk of the slowdown on 3D Model projects is coming from Step 1 – "Initial Processing" – which includes computing keypoints on images and then matching and aligning them using those keypoints. It doesn't look like the 3D Map projects had the same slowdown, though, so I suspect that the way these project types are handled in Step 1 has changed between version 4.3.33 and 4.4.12.

I reached out to our contacts at Pix4D, to get their input on this discovery. The response from their developers was that they were aware of the slowdown I observed, and that it is due to a fix they made to increase stability. It sounds to me like there was good reason for the change, and hopefully they can work to improve performance again in future versions while retaining the increased stability.

It is unfortunate that Pix4D 4.4.12 is a little slower than the previous version when it comes to processing 3D Model projects. However, the slowdown was similar on both the Intel and AMD processors we tested – so I don't think it will impact our overall recommendations.

The Core i9 9980XE remains the strongest CPU we have tested for 3D Maps, while AMD's Threadripper 2990WX is slightly better for large 3D Model projects (while costing less) and Intel's i9 9900K takes the top performance with small models (and is far, far cheaper).