Skip to content
Always look at the date when you read an article. Some of the content in this article is most likely out of date, as it was written on May 31, 2019. For newer information, see our more recent articles.

Pix4D is an advanced photogrammetry application, suited to a wide range of uses, with a focus on handling images captured by drone cameras. Processing of those images into point clouds and 3D meshes/textures is time-consuming, heavily using a computer's CPU and GPU. We have recently updated our benchmark tools for Pix4D, and published some testing comparing different CPUs, so now we are moving on to GPUs. Since Pix4D uses CUDA, it requires a NVIDIA graphics card – and we've rounded up the latest models to test.

Note: When we started the testing for this article, version 4.3.33 was the latest non-preview release – but over the course of our testing 4.4.12 was launched. We will be doing testing with that version on a couple of GPUs in the near future, and then will post a comparison to see if performance has changed substantially compared to what is shown in this article. When that is ready, we will link to it here.

Update: The Pix4D 4.4 performance testing we mentioned above is complete, and you can read all about it here.

Here is a list of the hardware we tested Pix4D on. The CPU and RAM capacity were kept the same across all test runs, to avoid either of those throwing off the comparison, and we used the Core i9 9980XE because it turned in the best performance in our recent CPU article.

This is not the first time we have looked into GPU performance in Pix4D, but we have recently improved our benchmarking for Pix4D. We now have four image sets that we own the rights to, covering both smaller and larger size 3D Model and 3D Map projects.

The smaller image sets are included in our public Pix4D benchmark, which you can download and run if you want to compare your system's performance to what we measured in our testing.

These image sets were processed 2-3 times on each video card, and the fastest overall result was used for the comparisons below.

Here are charts for each of the four image sets, showing the total time (in seconds) they took to process on each GPU. The video cards are listed in the same order on all charts, regardless of performance, to make it easy to see how they stack up. 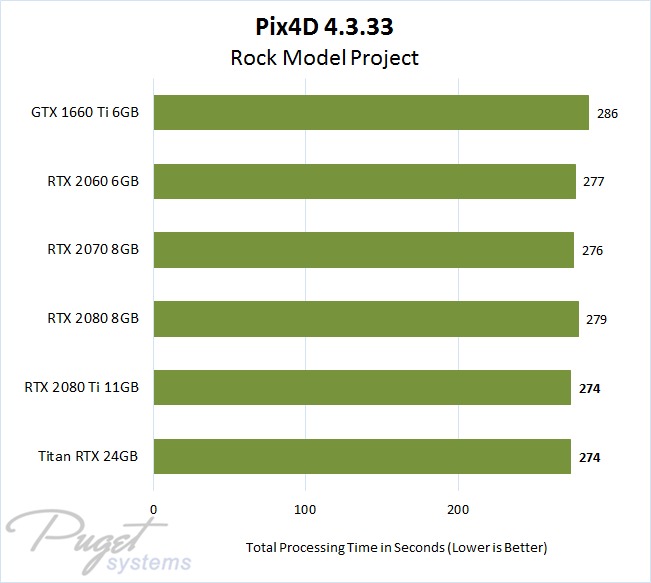 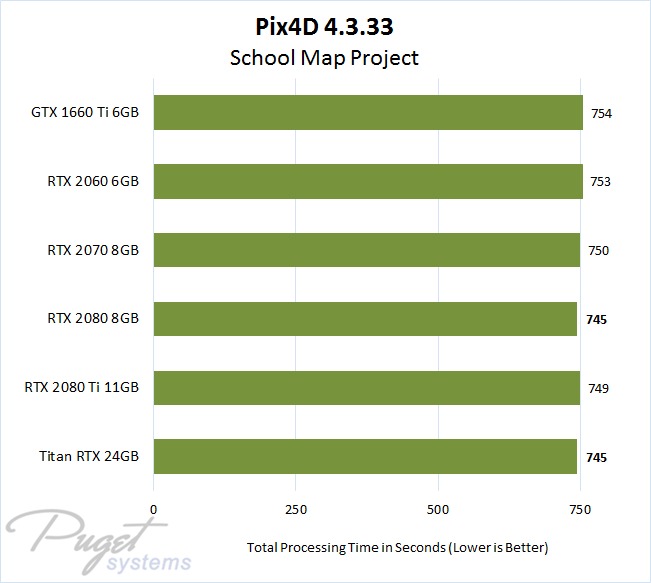 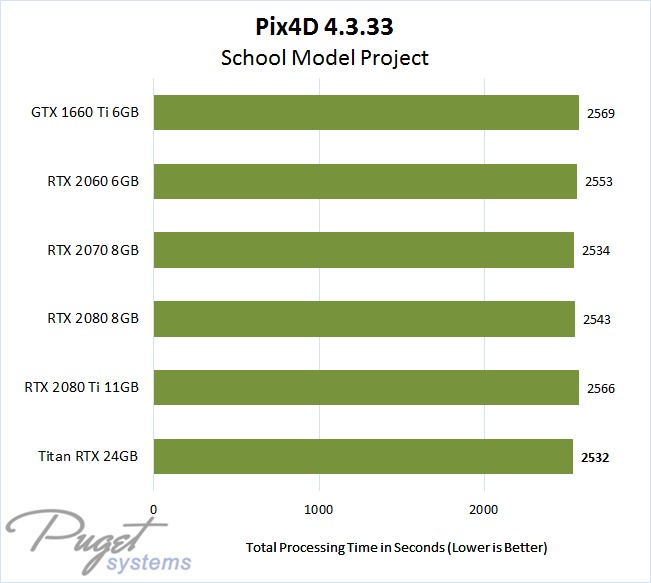 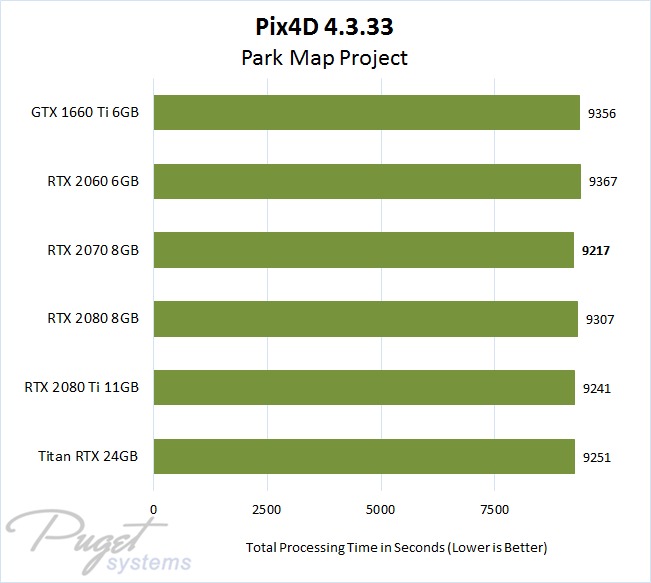 For those who want to dig further into the differences in how each card performed, here is a table showing the times for each step within Pix4D on each of the image sets. The fastest total times for each image set are highlighted in bold, both below and in the graphs above.

This is the most underwhelming set of data I've seen in a long time. Performance varied less than 5% across all six of the NVIDIA GPUs we tested in Pix4D, even though the prices of these cards ranged from around $300 up to $2500.

The most expensive model – the Titan RTX – was the fastest in three of the four tests… but only by fractions of a percent. For this application, it would seem that any mid-range or higher card will work well. It does need to be NVIDIA, however, as Pix4D uses CUDA.

What about multiple GPUs, though? The story there is worse: adding a second GPU actually slows down performance in Pix4D. 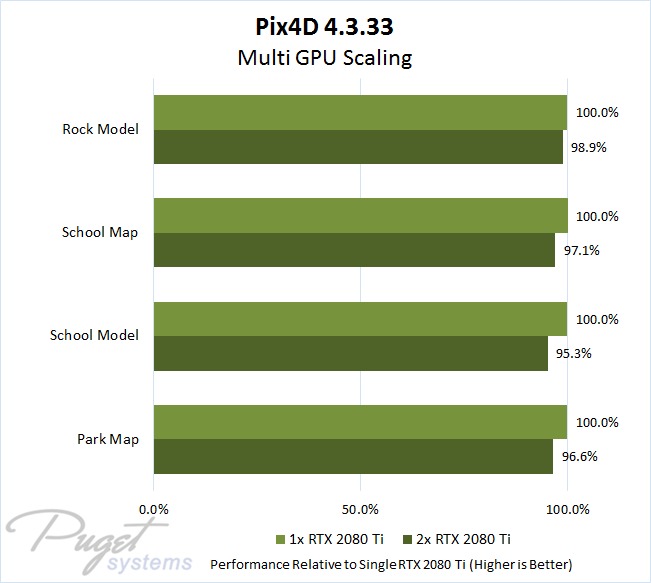 This multi-GPU testing was done on a Core i9 9900K system, as the i9 9980XE was busy with testing the various individual GPUs. Regardless of the CPU used, though, it looks like there is no reason to run more than one video card in a Pix4D workstation.

Based on the data above, our recommendation for Pix4D is to base your video card selection on other software you run instead.

If Pix4D is the only program you use, or the only one that utilizes the GPU, then any mid-range NVIDIA card should work just fine.

If you want CPU recommendations as well, check out this comparison. We will be updating our recommended systems for Pix4D based on this data shortly, and will also be checking to see if version 4.4 is any faster (or slower) than 4.3 in the near future – so stay tuned!