Skip to content
Always look at the date when you read an article. Some of the content in this article is most likely out of date, as it was written on July 24, 2019. For newer information, see RealityCapture 1.0.3: AMD Ryzen 3rd Gen vs Intel Core 9th Gen

AMD's new Ryzen 3rd generation processors feature both an increase in core count and per-core performance, allowing them to rival and sometimes beat Intel's mainstream Core processors in professional applications. In this article we are going to take a look at how these new CPUs handle RealityCapture, which benefits from both core count and clock speed at various points throughout its workflow.

RealityCapture, like other photogrammetry applications, is built to take a batch of photographs and turn them into digital, 3D models. Many steps are involved in that process, utilizing both the CPU and GPU at different points. Our focus here is on CPU performance, so most of the other hardware in the test systems will be fixed, but we will also look at two different RAM speeds for the new Ryzen chips.

Here is a list of the hardware we tested RealityCapture on. The video card and RAM capacity were kept the same across all platforms, to avoid either of those throwing off the comparison. Both test platforms were running fully updated and patched versions of Windows 10.

All of the processors were tested with four 16GB DDR4 modules running at 2666MHz – the official max memory speed for this configuration (four dual-rank memory modules) on both the AMD and Intel platforms. However, Ryzen 3rd Gen also officially supports higher speed memory when using only two sticks (or four single-rank modules) so we tested those CPUs with 3200MHz RAM as well.

We still used a full four sticks when running at 3200MHz, to maintain the same amount of memory (since RealityCapture is impacted by how much RAM is in the system), so technically this test was outside of the official AMD memory support spec. It is still worthwhile, though, as it lets us see how much difference RAM speed can make on this platform when the amount of memory is kept the same.

Here is a gallery of charts for each of the four image sets, showing the total time (in seconds) they took to process on each CPU. The processors are listed in order of performance, to make it easy to see how they stack up. Intel's Core 9th Gen chips are shown in blue, with AMD's Ryzen 3rd Gen in red for 3200MHz and orange for 2666MHz results. 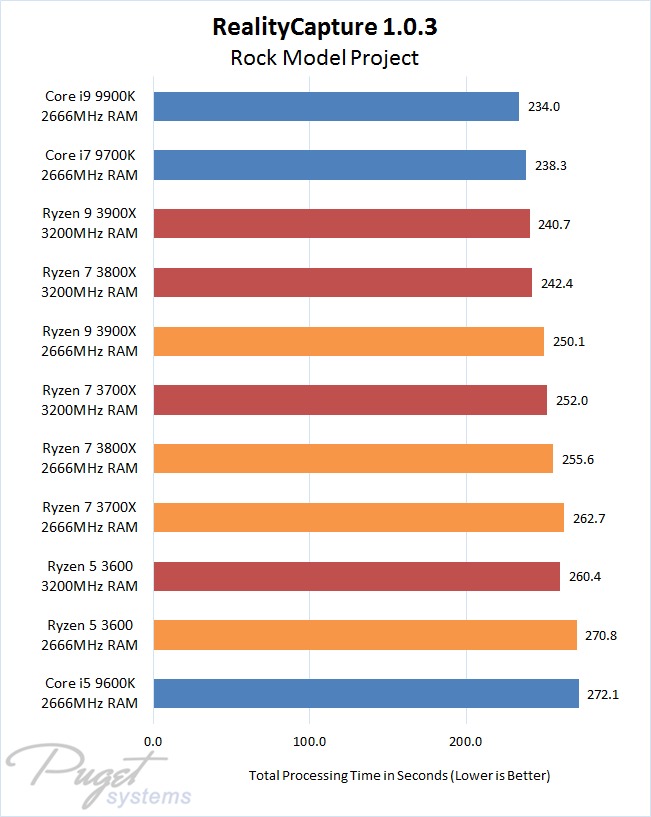 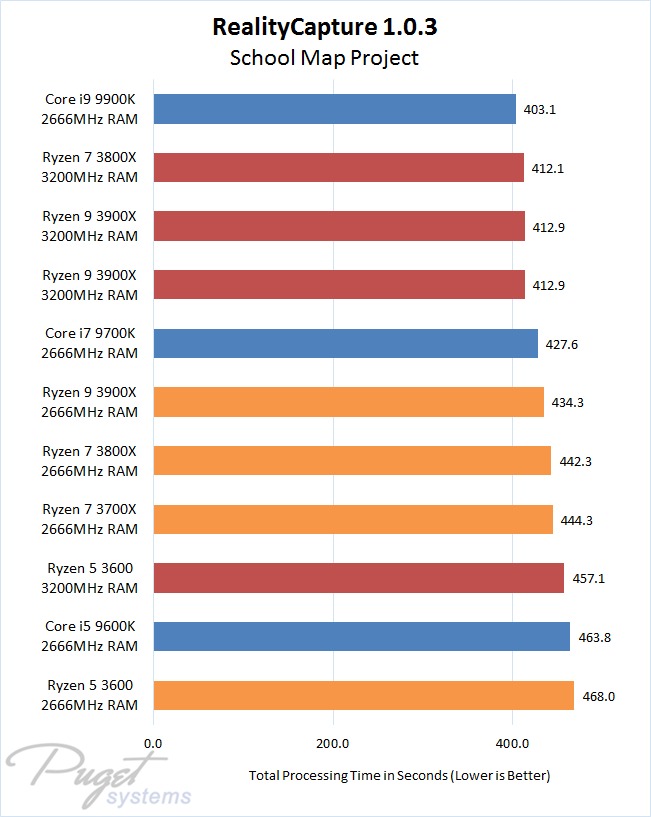 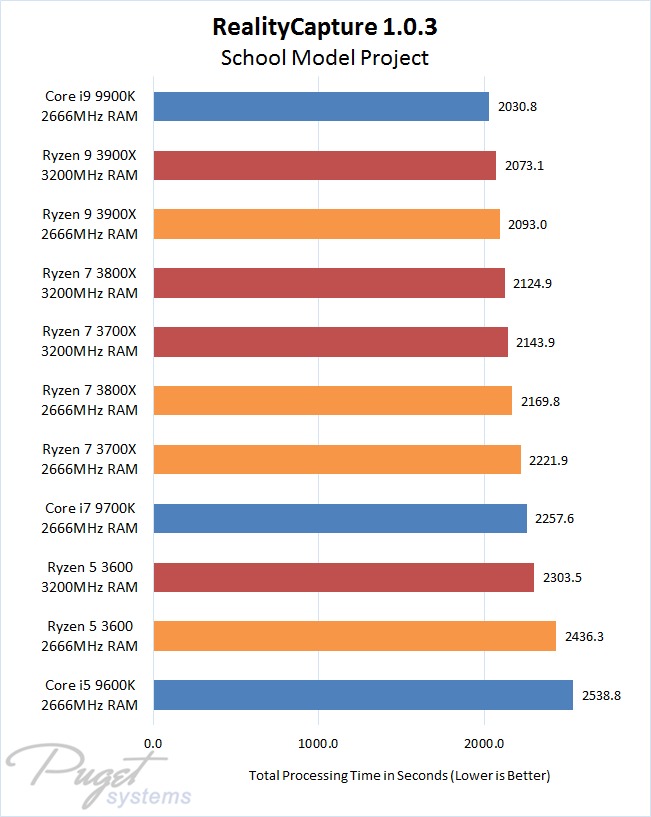 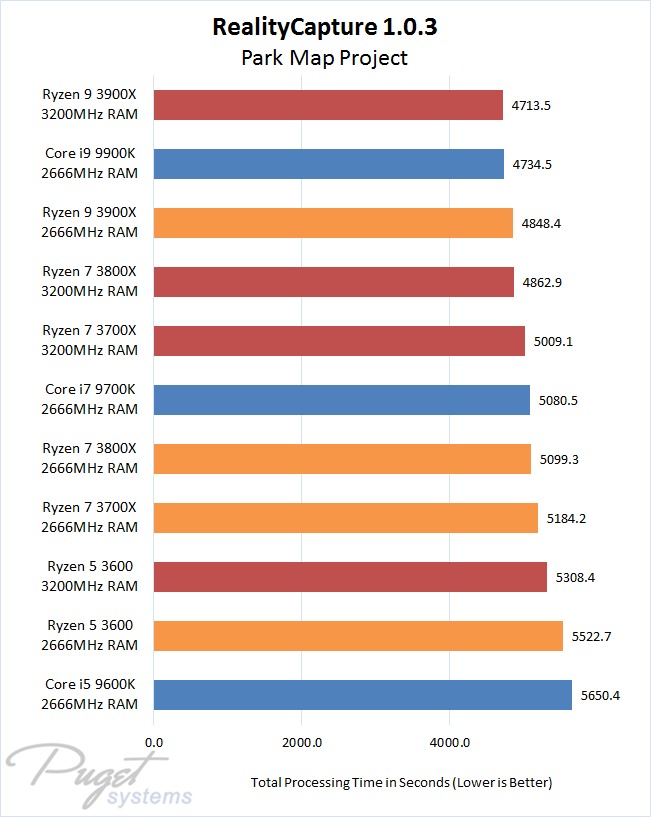 For those who want to dig further into the differences in how each CPU performs, here is a table showing the times for each step within RealityCapture on each of the image sets. The fastest total time for each image set is highlighted in bold:

Despite the improvements AMD has made in this generation of processors, Intel's Core i9 9900K still came in with the best performance in three of the four tests. The Ryzen 9 3900X did beat it by a hair (about half a percent) in the Park Map test, which is the first time we've seen any processor best the 9900K in RealityCapture, but that is such a small lead that it could easily be within the margin of error. It also required using 3200MHz RAM, which again is not supported by AMD with this many memory modules. If you cut back to two sticks, for 32GB total, the performance loss of having less memory when dealing with large projects would put Intel back on top again.

It is somewhat interesting to dig into the detailed result table as well, because it is there that we can see how Intel and AMD chips perform differently in RealityCapture despite having such close performance results. The Ryzen chips do very well during the Align Images phase, which also appears to benefit greatly from higher speed memory, while they fall behind Intel during the Texture step.

With very strong performance results across all of our RealityCapture tests, it is easy to make a single processor recommendation: Intel's Core i9 9900K is the top-performing CPU for this application. It had the fastest processing times for three of our four datasets, and only lost in the last one to a technically unsupported RAM configuration on AMD's Ryzen 9 3900X (and only by 0.5%).

Some of AMD's Ryzen 7 chips did outpace Intel's other models at similar price points, though, making them viable options if the $100 to $200 savings (maybe around 5% in the grand scheme of a whole system) is enough to make or break your budget.