Skip to content
Always look at the date when you read an article. Some of the content in this article is most likely out of date, as it was written on August 13, 2018. For newer information, see Cinema 4D: AMD Threadripper 2990WX Performance

AMD released the second generation of their Threadripper processors in August 2018, starting with the 2990WX which doubled the number of CPU cores available in this product line from 16 to 32. This is the first desktop-oriented processor with 32 cores, and as such it performs very well in CPU-based rendering. This trend should continue in the multi-core performance test within Cinebench… but that is only part of the story for users of Cinema 4D. Aside from rendering, almost everything else in C4D – modeling, animation, simulation, etc – is single-threaded. How well does Threadripper 2 handle that sort of workload? Let's find out!

To put the new Threadripper 2990WX's performance in Cinema 4D into perspective, we are also taking a look at the flagship of the first generation: the 16-core 1950X. In addition we have results from several of Intel's Core series processors, ranging from 6 to 18 cores, to compare them to on the latest release of Cinebench. The i7 7820X and i9 7900X results were pulled from previous Cinema 4D articles.

Cinebench provides three scores when run in advanced mode: CPU (it isn't specified, but this is the multi-core result), CPU (Single Core), and OpenGL. The last of those is somewhat impacted by the CPU, but is more about the video card – so we aren't including it here. We'll start off instead with the overall, multi-threaded CPU scores. This shows how each CPU compares when rendering a still frame with the built-in C4D renderer. AMD's Threadripper processors are shown in red, with Intel's chips in blue: 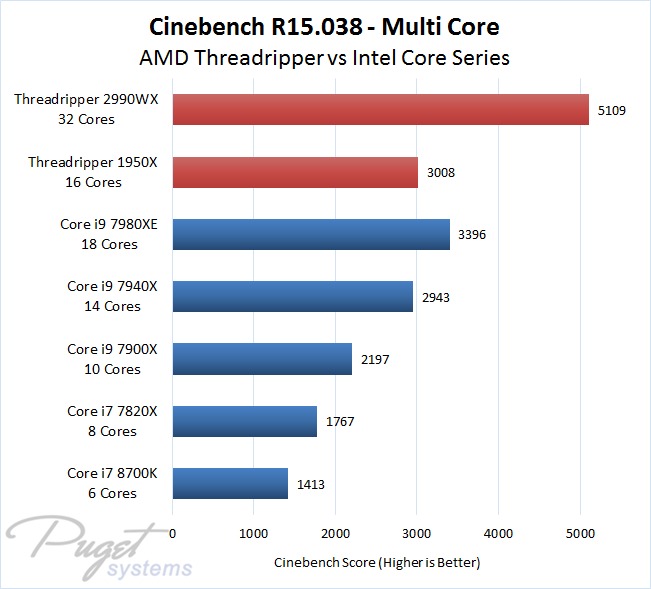 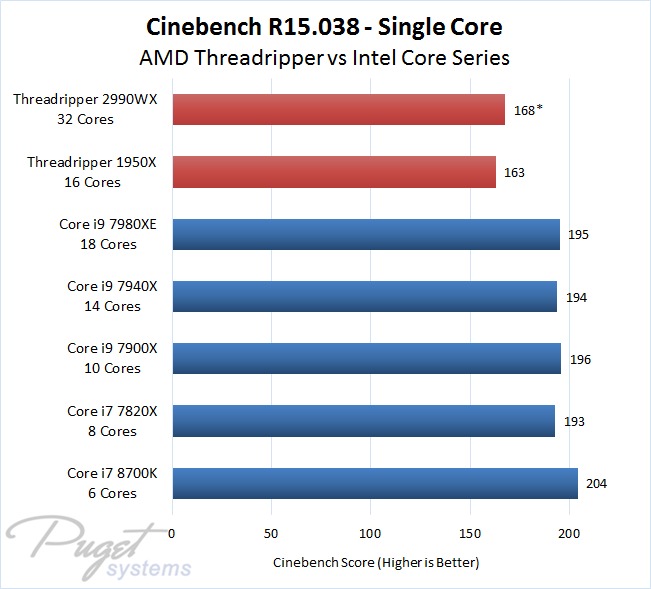 You might notice the asterisk on the 2990WX's score up there: we got some conflicting results on that test, when using different motherboards. These results are from a new board from MSI: the MEG X399 Creation. It is part of a new crop of boards, releasing alongside Threadripper 2, which are supposed to be better able to handle this processor's high power draw. Older X399 motherboards should also be able to run these chips, though, so we ran both the 1950X and the 2990WX on a Gigabyte Aorus Gaming 7 board as well. The older 1950X CPU gave effectively the same results on both platforms (within about 2% of eachother)… but the new 2990WX scored much better on the MSI board in the single-core test. That is the result shown above, 167.8 points, but on the Gigabyte Aorus it only got 146.4 points. That is nearly 15% slower, which is a sizable drop in performance. This discrepancy was limited to the single-threaded test, though; on the multi-core test the two boards were within about 2% of each other again.

I am suspicious of that difference, but it was verified through repeated testing. It may a result of the claimed improvements to power handling, though it seems odd for that to show up in a single-threaded test… which should draw less power than when all the cores are working. It could also be some difference in the BIOS or default settings between the MSI and Gigabyte motherboards. I did make sure they were using the same version of Windows, the same drivers, the same memory speeds / timings, etc.

The first graph above, showing multi-core rendering performance, highlights Threadripper 2's strength. In applications like this, where every core can be put to use at the same time, the 2990WX and its 32 cores absolutely trounce every other single-CPU configuration currently available. It is about 70% faster than the older 1950X, and 50% faster than Intel's Core i9 7980XE… even though the 2990WX is 10% less expensive ($1799 vs $1999). For pure CPU-based rendering, AMD's Threadripper 2 is nothing short of fantastic.

Unfortunately, single-core performance is a different story. AMD processors generally don't have as high of clock speeds as Intel chips, and also tend to be a little bit behind on instructions per clock (IPC), and that shows here. The Threadripper 2990WX falls behind all of the tested Intel processors in the second chart, which means that general performance within Cinema 4D for modeling, animation, and physics simulations will all be much slower on Threadripper (first or second gen) than on competing platforms. Just how important that is will depend on each user's workload. Someone doing primarily the design and animation side of things, with very little actual rendering, would be much better served by a processor like Intel's Core i7 8700K. Likewise, those using a different rendering plug-in – especially one that uses the GPUs instead – could benefit from higher clock speed more than an abundance of cores.

In the case of animation, results will vary. For scenes with just a little, pre-scripted movement between each frame – and especially if the resolution being rendered to is very high – the great multi-threaded performance will win out. On the other hand, users with complex physical simulations happening between each frame may find that the single-threaded nature of those calculations slows Cinema 4D down so much that some of the Core i9 options would actually finish rendering the full animation more quickly.

AMD's new Threadripper 2990WX is a mixed bag for Cinema 4D. If all you care about is single-frame render times, then it is the fastest single-socket processor available… by quite a wide margin. However, if the speed of working on modeling, animation, and simulation is just as important then AMD's slower single-core performance may keep this CPU from being the right choice. 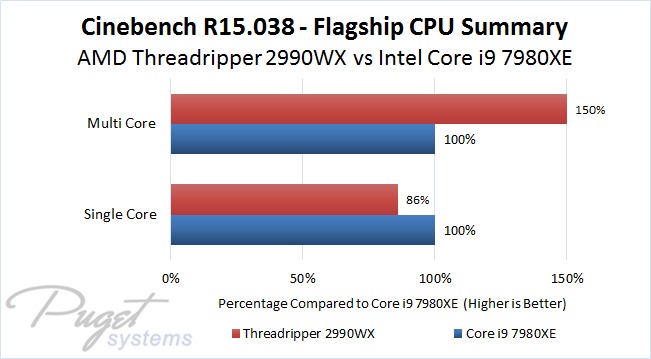 Because of that, we are going to keep our Cinema 4D workstations on other platforms for the time being. You can see the systems we recommend below. If you want a dedicated CPU rendering box with AMD's Threadripper, though, we can provide those too – just check out our V-Ray Threadripper system. The 2990WX should be available there soon, once it passes our hardware qualification process.