Skip to content
Always look at the date when you read an article. Some of the content in this article is most likely out of date, as it was written on December 16, 2015. For newer information, see our more recent articles.

When designing a computer there are literally thousands of different hardware components to choose from and each one will have an impact on the overall performance of your system in some shape or form. For Solidworks, it is extremely important to have a good CPU and plenty of RAM, but you also need a matching video card to ensure that you are able to rotate and view models smoothly.

What video card you need is going to depend on a number of factors including:

In this article we will be testing three different NVIDIA Quadro video cards while taking into account these four factors. If you want to skip over our individual benchmark results and simply view our conclusions, feel free to jump ahead to the conclusion section.

Our test platform is built around an Intel Core i7 6700K as that is the CPU that should give the best possible performance in Solidworks when rotating models. Currently, Solidworks only officially supports NVIDIA Quadro and AMD FirePro discrete video cards and for this article we will be focusing on NVIDIA Quadro cards in particular.

To perform the actual benchmarking, we used a mix of AutoIt scripts and Solidworks macros to set the different quality settings, load the relevant model, and record the average FPS while rotating the model. There are a number of different ways we could have recorded the FPS, but we opted to simply use a macro with a timer to rotate the model 45 degrees to the left and right for a set number of frames. From the number of frames and the total time it took to render those frames, we are able to determine the average FPS (frames per second). One key factor is that we made sure that every model started with the view set to front-top so that any reflections and shadows would stay in view while the model was being rotated. 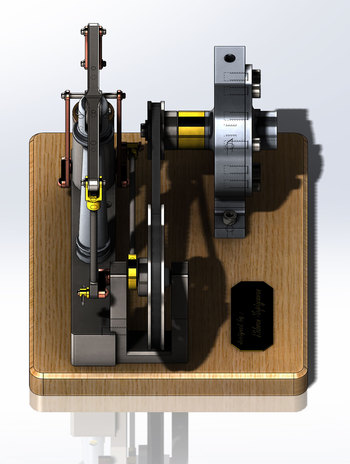 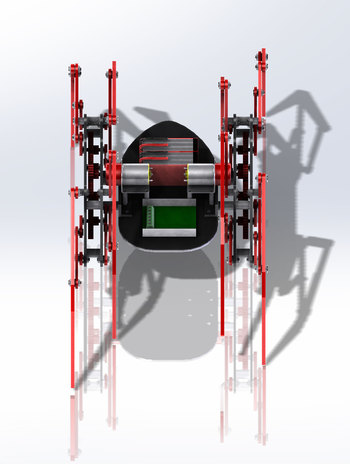 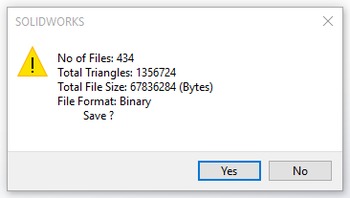 To start things off we are going to look at the simplest of our test models which has only 80 parts and .26 million triangles. While we did see a change in FPS with different settings and with different video cards, what we mostly want to point out is that at the highest quality settings (LOD off, Shaded w/ Edges, and RealView and Ambient Occlusion enabled) even the entry Quadro K620 was able to render the model at a ridiculous frames per second (~160 FPS at the worst).

Considering the fact that many Solidworks users consider anything above 30 FPS as acceptable, this means that for simple models at 1080p even an entry-level card like the Quadro K620 is more than adequate when paired with a high frequency CPU like our Intel Core i7 6700K. 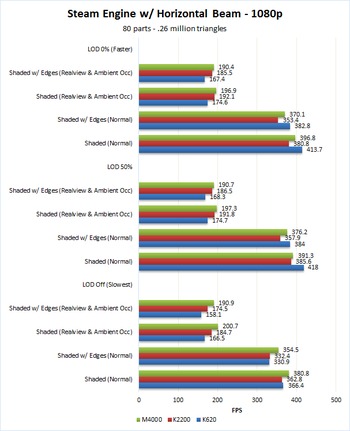 The Spalker model contains about 4.5 times more parts and twice the number of triangles than the previous model. While this does translate into a decent drop in FPS, we are again able to achieve above 60 FPS with any video card and quality setting combination. So once again on our test platform even a Quadro K620 is more than adequate for this complex of model. 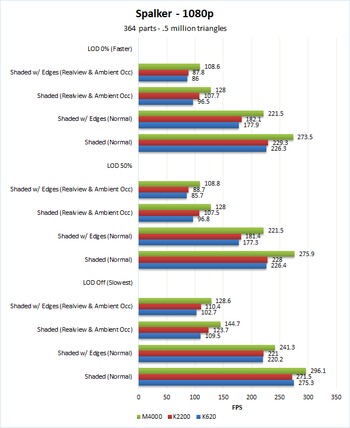 While the Audi R8 model doesn't have many more parts than the Spalker model, it does have about 3 times the number of triangles. If all you need is 30 FPS, it turns out that a Quadro K620 is still fully capable of displaying this model at any quality setting. If you want to achieve a higher FPS, however, the additional triangles in this model means that you may want to look at a higher-end video card.

Without RealView and Ambient Occlusion, the Quadro K620 and Quadro K2200 actually give almost identical performance and either should still give you above 60 FPS. If you enable RealView and Ambient Occlusion, however, you are going to want a Quadro M4000 and even then you will only be able to stay above 60 FPS when using shaded mode (not shaded w/ edges).

If you need 60 FPS with Realview, Ambient Occlusion, and shaded w/ edges, you may need to look at an even higher end GPU like a Quaro M5000 or even a Quadro M6000. 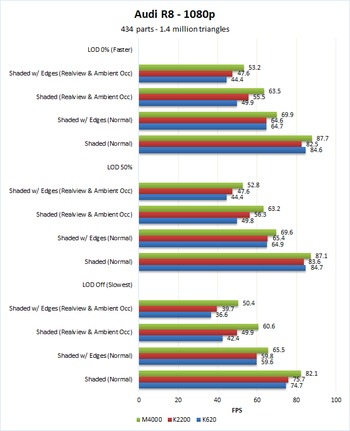 Even with our most simple model, you can already see just how much more horsepower your system needs to display Solidworks models at 4K resolutions. While at 1080p we were getting at worse ~160 FPS even with a K620, at 4K we are getting as low as ~60 FPS.

Even with how much lower the FPS is at 4K, however, for this complex of a model, a Quadro K620 is still the best choice since it should give you over 60FPS regardless of quality setting. 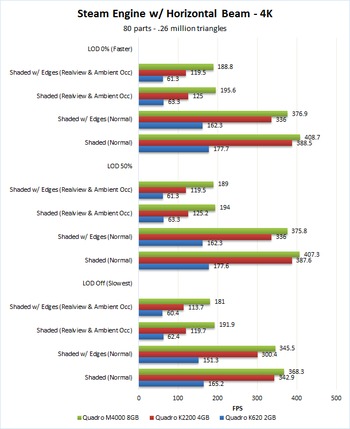 If you do not use RealView, a K620 is still going to get you over 60 FPS even at 4K with a model with ~.5 million triangles. If you do use RealView, however, a K620 will keep you above 30 FPS but if you want 60 FPS you would definitely want to upgrade to a Quadro K2200. 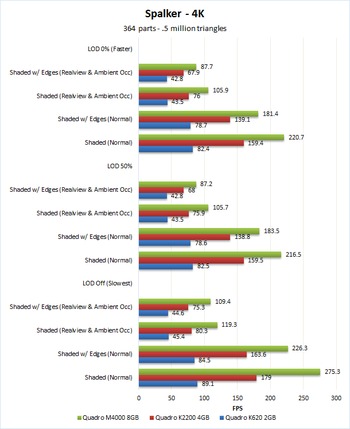 The Audi R8 model is the first time we see the Quadro K620 not able to maintain greater than 30 FPS with certain quality settings. This only happens with RealView and Ambient Occlusion on, however, so if you do not use these features a K620 will still keep you above 30 FPS. If you do use those features, you will need at least a Quadro K2200 to stay above 30 FPS.

If you want to be above 60 FPS, a Quadro K2200 will get you there if you do not use RealView and Ambient Occlusion. If you do use those features, technically none of the cards we tested will keep you above 60 FPS. The Quadro M4000 will get you very close, but not quite. While we did not have it available to test with, a Quadro M5000 will probably be your best choice if you want to maintain 60 FPS at 4K even with the highest quality settings with this complex of a model. 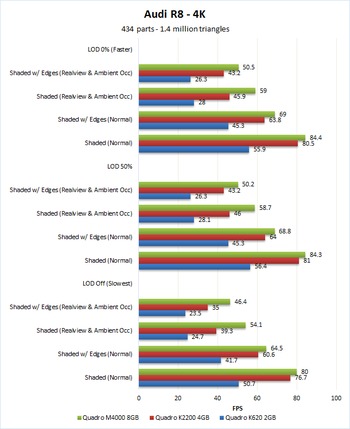 While we've looked at the performance of Quadro cards for different models and quality settings, a very important factor that should not be ignored is the amount of VRAM (video card memory) you will need. While we know that even the Quadro K620 has enough VRAM to display the assemblies we tested with, it only has 2GB of VRAM which is actually very close to the amount required when we were testing at 4K.

To help you decide how much VRAM you need, we logged how much was being used for each model:

Keep in mind that this is only the amount of VRAM used when the only thing you have open is the one assembly. As soon as you start adding additional assemblies, the component parts of an assembly, or even running other programs on the system, the VRAM requirements climb faster than you would think. For example, if you were to open additional assemblies similar to the Audi R8 assembly, we found that you would need roughly an additional 165MB of VRAM per assembly at 1080p or another 650MB per assembly for 4K. 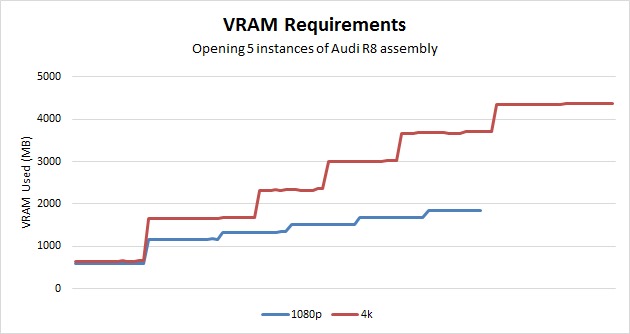 For 4K, you really need a card with at least 4GB of VRAM. Our test assemblies all used almost 2GB of VRAM by themselves, so as soon as you open even a few additional parts you would need more than 2GB. If you have 3+ complex assemblies, a decent number of parts/drawings open, or other programs running that use a decent amount of VRAM, we would strongly recommend upgrading to a card that has 8GB of VRAM. However, be aware that once we had enough files open to use around 5-6GB of VRAM, we started to get an "available system memory is critically low" error message from Solidworks even though we still had plenty of VRAM and system RAM free. We believe this is due to an issue described in this blog post where Windows is only able to display a finite amount of GDI objects. All this really means is that if you have a video card with 8GB of VRAM you may not be able to actually utilize all of it (although you should be able to at least use some of it which will allow you to have more files open at a time than you could with a 4GB card).

The right video card for you is going to depend on a number of factors including your screen resolution, the complexity of assemblies you work with, how many files you tend to have open, the quality settings you prefer to use, and your target FPS. However, based on our benchmarks we can come up with some general guidelines that should help you decide on the correct video card for your use-case. These recommendations are based not only on the performance numbers we saw, but also the amount of VRAM you are likely to need.

If your goal is to maintain at least 30 FPS when rotating models, the decision is actually fairly straight-forward. Unless you work with extremely complex assemblies a Quadro K620 will do great for 1080p. While it technically has the capability to power those same models at 4K, the 2GB of VRAM will very likely not be enough. For that reason we would recommend upgrading to a Quadro K2200 with 4GB of VRAM if you use a 4K display.

*Not specifically benchmarked in this article