The applications tested are not yet fully optimized for compute capability 8.9 i.e. sm89, which is the compute CUDA level for the Ada Lovelace architecture. That should be fully supported with CUDA 12. The testing will be revisited after further launches of the Lovelace arch series GPUs and rebuilt applications at this higher CUDA compute capability.

The RTX 4090 does not disappoint! NVIDIA has managed, yet again, to push performance improvements to nearly double over last generation. Those days are long gone on the CPU side and may be coming to an end for NVIDIA too, given CEO Jensen Huang's comment at GTC Fall 2022, “Moore’s Law is dead.” However, I suspect that they will still manage to impress with future generations. For now, the Ada Lovelace and Hopper architectures offer tremendous performance.

The charts below show the excellent compute performance of the RTX 4090 in comparison with the also excellent RTX 3090. Keep in mind that these are preliminary results with application that are not fully optimized for the new compute level 8.9 for the Ada Lovelace architecture.

There will be a few details about the benchmarks and command lines that were used to run them. I am including some output for only RTX 4090 job runs, however, the 4090 and 3090 were both tested in the same system back to back, i.e. all results are new testing.

This is the HPL Linpack benchmark built to run on NVIDIA GPUs. It is intended to testing on the high-end compute GPUs like the A100 and H100. It is also setup for multi-GPU multi-node use. This is the standard benchmark used for ranking the Top500 supercomputers.

It is really not intended to be run on RTX GPUs! RTX GPU have very poor double precision (fp64) performance compared to compute GPUs. The single precision (fp32) performance is however excellent on RTX. There is a fp32 version of this benchmark named HPL-AI. Unfortunately I could not get it to properly converge with 1 or 2 RTX 4090s or 3090s.

I decided to include the fp64 HPL result because even though it is nearly 10 times lower performance than an A100 it is still respectable compared to a 16-24 core CPU! I feel that developers working on code that is intended for A100 or H100 could develop and test on a RTX 4090 before moving code to the (much more expensive) A100 or H100.

HPCG (High Performance Conjugate Gradient) is a memory-bound application, typical of many engineering "solvers". It is the secondary ranking benchmark of the Top500 supercomputer list. GPU results for this benchmark are typically much higher than even high end CPU due to the high performance memory on GPUs

This is the GPU resident version of the molecular dynamics package NAMD 3.0 alpha 11. Performance is very good! 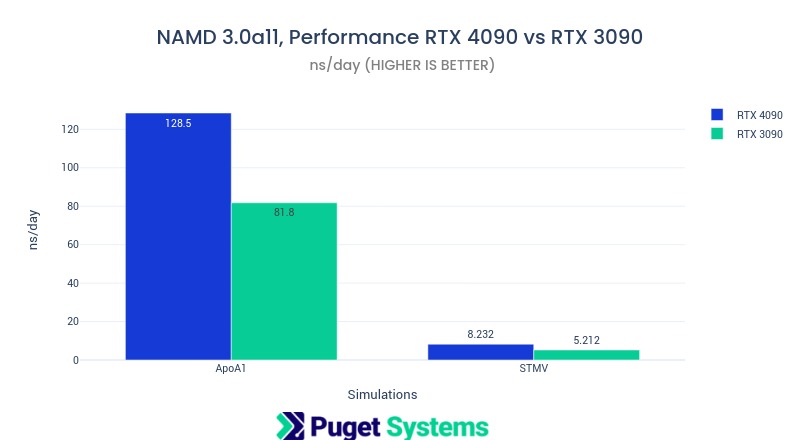 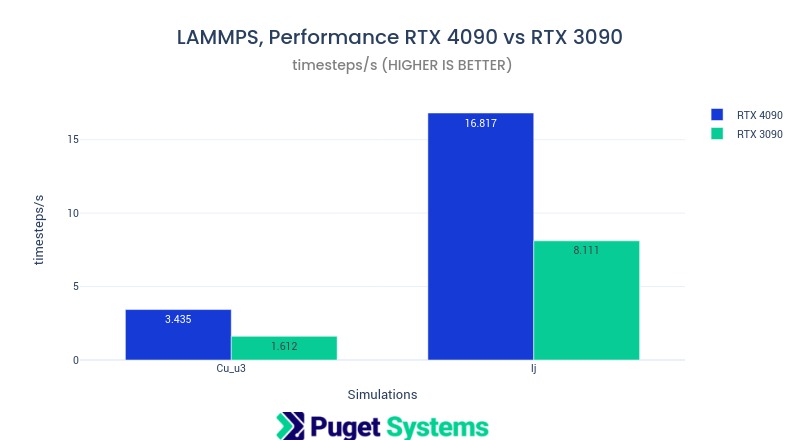 This is the NVIDIA maintained version 1 of TensorFlow which typically offers somewhat better performance than version 2. The benchmark is training 100 steps of the ResNet 50 layer convolution neural network (CNN). The result is the highest images-per-second value from the run steps. FP32 and FP16 (tensorcore) jobs were run. 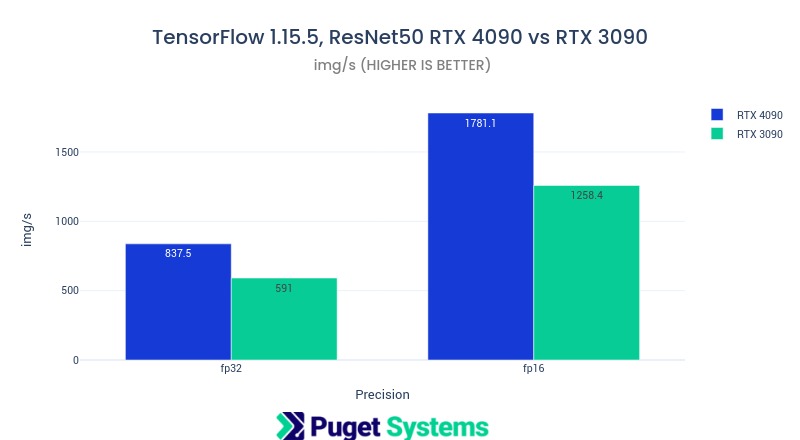 This benchmark is using PyTorch 1.13 for a 6 epoch train of a Transformer model on Wikitext-2 with CUDA.

These preliminary compute results for the new NVIDIA RTX 4090 look very good and offer a significant performance boost over last generation RTX 3090 (which was already very good)! I expect results to be better with code compiled against CUDA 12 which will have full support for Ada Lovelace and Hopper arch GPUs. There will be more RTX 4000 series and Pro Axxx-ada series GPUs over the next few months. I will revisit testing.

One surprising result was how respectable the double precision floating point (fp64) was on RTX 4090. fp64 performance is not a highlighted feature of RTX GPUs. Single precision fp32 is typically 20 times fp64 for these GPUs. However, the fp64 performance of the RTX 4090 is competitive with 16-34 core CPUs. I feel this could be used for code testing and development that is target to run on high-end compute GPUs like A100 and H100.

Overall it looks like NVIDIA has kept the performance increase near doubling on successive GPU generations for another release. They have been doing this for over 10 years now. Impressive indeed!