We've been curious about the performance of WSL (Microsoft WSL2) for scientific applications and decided to do a few relevant benchmarks. We do a lot of automated benchmark runs as part of our customer system builds. This benchmark automation is done on a Windows 11 install during our performance checks and stress testing for customer systems. It provides valuable hardware performance information for us and helps with out design and recommendation process. We also do new hardware testing and validation this way in labs. I also do native testing and benchmarking on Linux for our new hardware validation. I wanted to see how well WSL would do as a proxy for some of the automated part of our routine testing. This post is a first exploration of this idea.

For this post I've chosen 3 of my standard performance benchmarks,

I used Spack to create optimized docker containers of these (and other applications) with a build target for AMD zen3 using AMD AOCC compiler and AOCL performance libraries. These containers were then bundled as no-dependency self-running containers using NVIDIA enroot and run with benchmark code on native Linux and WSL.

The test system for this work is my personal AMD Ryzen 5800X 8-core system with 64GB DDR4 2400MHz memory. I use this system as a test platform, dual booting between Ubuntu 22.04 Linux and Windows 11. The Windows install is setup with WSL2 running Ubuntu 22.04. This is a very modest test system that was convenient to use for this proof-of-concept testing. Expect to see more extensive testing with high-end AMD, Intel, and NVIDIA hardware in the future.

On to the results!

Linpack benchmark is the "standard HPC" performance measure. It solves a system of linear equations using matrix methods with performance largely dependent on an optimized BLAS library. In this case the code was compiled with AMD AOCC and linked with AMD AOCL BLIS as the performance library. The target architecture is zen3. 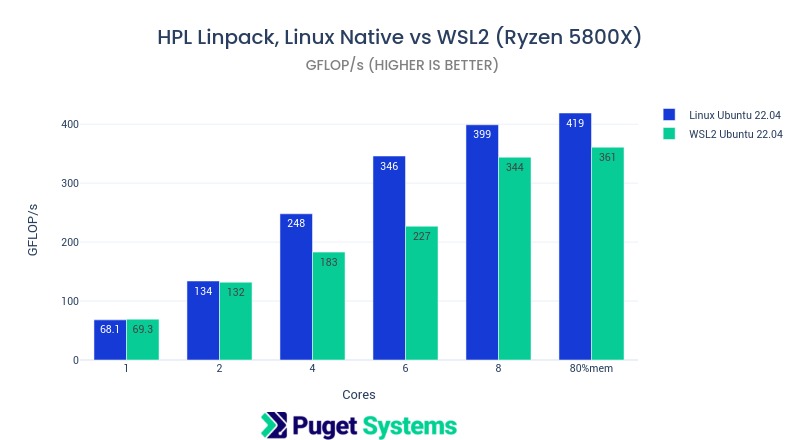 High Performance Conjugate Gradient, is the second standard HPC benchmark. It is a sparse 2nd order partial differential equation, multi-grid solver. It is memory-bound and does best on systems with higher numbers of memory-channels. The 5800X is not idea for this. It is often the case on systems with many cores for this benchmark to do best on 1/2 or 1/4 of the cores. On the 5800X both Linux native and WSL had there best results with 2 cores. 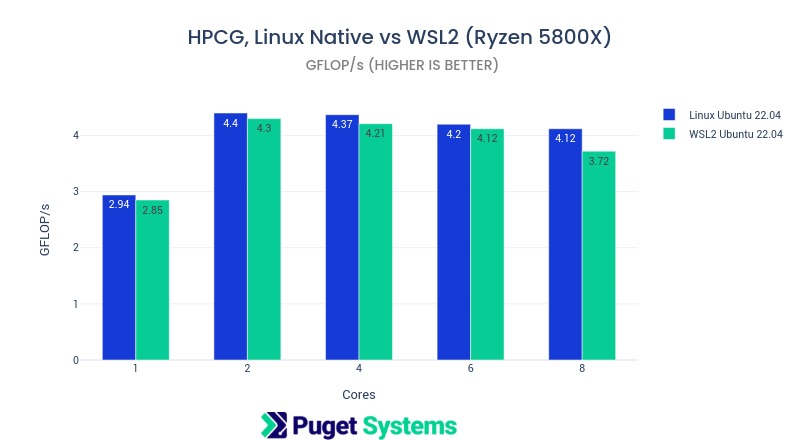 These are 3 different job sizes and types. 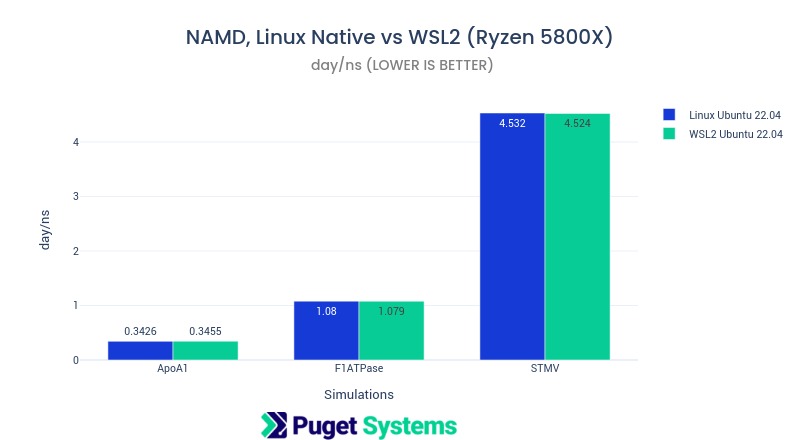 These results look very good for WSL2! I was surprised at how good NAMD was, both from the target optimizations and how similar native Linux and WSL were. HPL results were as expected worse on WSL. They would also be worse running directly on Windows although I didn't test that here. (We don't have a way to build optimized code with AMD tools for Windows). HPCG was very close between Linux native and WSL. That is encouraging for memory-bound application running on WSL.

I will certainly be doing more testing like this and I believe that the results in this post warrant moving forward with adding automated scientific benchmarks on WSL to our standard testing.