V-Ray, from Chaos Group, is made up of a pair of rendering engines - one that uses the CPUs (processors) and another which focuses on GPUs (video cards). We have already tested modern CPUs on V-Ray, using the benchmark utility they make publicly available, but since GPUs can be utilized too it is important to look at how various video cards perform as well.

Recently, NVIDIA released a new graphics architecture (Turing) with both mainstream GeForce and professional-grade Quadro video card models. Since GeForce cards are much more affordable, and multiple GPUs are often desired, they are popular for use with GPU based rendering. We are going to take a look at how the latest GeForce RTX series cards perform individually in V-Ray Benchmark.

The current version of the V-Ray Benchmark (1.0.8) tests the CPU and GPU(s) separately, even though the latest version of V-Ray Next GPU itself can use both the CPU and video cards at the same time. Because of the benchmark's limitation, it doesn't really matter what CPU we use to test the new GeForce cards - but still, we decided to stick with the same platform for all GPUs to ensure a fair test.

Here are the results, in seconds, from V-Ray Benchmark 1.0.8 (using V-Ray 3.57.01) for the different video cards we tested. The new GeForce RTX series cards are in a darker shade of green, to make it easy to pick them out: 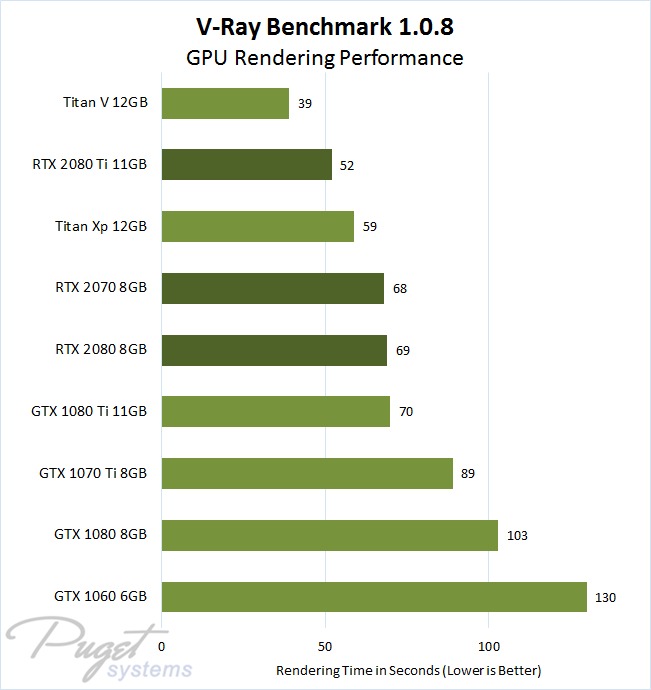 Surprisingly, the RTX 2070 actually outperformed the more expensive 2080 - just by a hair, but I had expected it to be slower. To verify this result I looked up several systems we have sold with the 2070 and 2080 in recent weeks, and sure enough: the RTX 2080 came in at 68 to 70 seconds, while the 2070 ranged from 67 to 69 seconds. There is some variance in there from one system to another because of things like the CPU and other specs, as well as different variants of these video cards which may be clocked slightly higher or lower... but the trend of the 2070 being as fast or slightly faster than the 2080 is solid. I am not sure why, though, and it flies in the face of the relative specs of the two cards. It makes me want to go back and test the 2070 in other GPU rendering engines like OctaneRender and Redshift, since we did our last round of testing with the RTX 2080 and 2080 Ti on those applications before the 2070 was available.

Beyond that strange outlier, the rest of the results line up pretty logically. The RTX 2080 Ti outperforms the similarly-priced Titan Xp, and the 2070 & 2080 are basically tied with the older GTX 1080 Ti. There is not much reason to get older video cards now, though in some places they do offer more VRAM. Topping it off, Titan V is still the fastest single card - at least on this version of V-Ray Benchmark.

I bring up the version of V-Ray because the engine used in the current benchmark is rather dated now. It is based on V-Ray 3.57.01, but both V-Ray 3.6 and V-Ray Next have been out for some time now. Chaos Group has been saying for a while that an updated benchmark is in the works which will demonstrate the newer features and performance of V-Ray Next, but I have not seen an ETA. Additionally, these new GeForce RTX cards feature hardware-based ray tracing cores - so if V-Ray is updated to utilize those in the future it will swing performance even more in favor of the RTX cards, likely pushing them ahead of the Titan V (which lacks RT cores). Newer versions of V-Ray may alter how video cards are utilized, potentially putting the RTX 2080 back in front of the 2070.

To further investigate the situation with the RTX 2070 outperforming what should be a faster 2080, we re-ran the V-Ray Benchmark on another platform with each of the three GeForce RTX series cards - both individually, as before, and in pairs. This gave us yet another point of reference on individual card performance along with a chance to see if, perhaps, the 2070 was great as a single card but wouldn't scale as well with multiple GPUs. Here are the results, with dual GPU configurations highlighted in a darker shade of green: 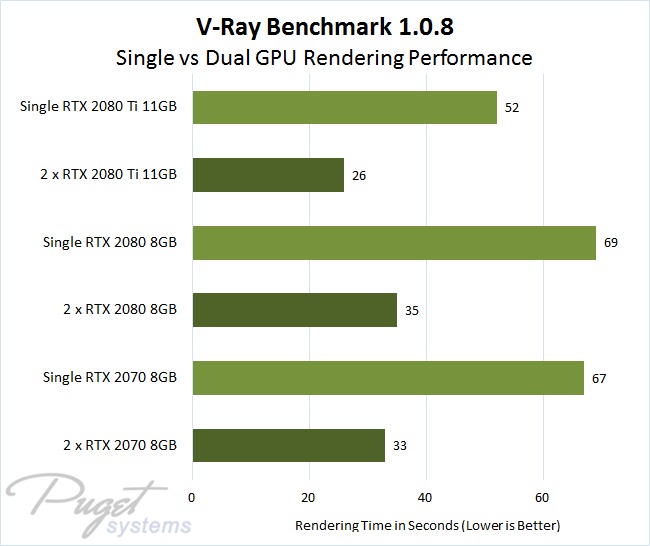 Both as a single card and in a pair, the RTX 2070 outperformed the 2080 - against all reason that I can come up with. The less expensive, less powerful 2070 came in two seconds faster in both configurations. All three RTX series cards scaled perfectly from 1 to 2 GPUs, with render time being cut almost exactly in half in each case. Since the 2070 and 2080 both have 8GB of memory as well, for versions of V-Ray that match this benchmark there seems to be no reason to opt for the more expensive card. Please note, as discussed above, that the V-Ray Benchmark is older now - newer versions of V-Ray, like 3.6 or Next, may behave differently.

An interesting side note: on the 2080 and 2080 Ti, we ran the dual GPU tests both with and without SLI / NVLink enabled. In most programs where we have tried this, and where NVLink support was not present, performance actually went down - but in the V-Ray Benchmark, it was identical. Both pairs of cards took the exact same amount of time to render whether they were connected via SLI / NVLink or not... almost as if V-Ray just ignored that feature entirely. It could also be evidence that V-Ray is NVLink aware, but in that case I would have expected similar but slightly different performance - rather than exactly the same result, down to the second. Hopefully the next version of the V-Ray Benchmark will show a difference with NVLink, since that tech should be beneficial for rendering. The RTX 2070s do not support NVLink, so that is something which could potentially alter the performance landscape between them in the future.

As of right now, and for versions of V-Ray which mirror the performance of the 1.0.8 benchmark, only three video cards make much sense: the GeForce RTX 2070 8GB, GeForce RTX 2080 Ti 11GB, and Titan V 12GB. Lower-end cards don't save enough money to justify the loss in speed, and other high-end cards are either slower at similar price points or cost more for the same rendering speed.

For the best results, though, go for a system with multiple video cards in order to get the best performance from a single workstation!