Molecular Dynamics is an important tool in many areas of scientific research. We get deep satisfaction from providing workstations for this research. It's a feeling of contributing to the common good and "making a difference". To this end we make a serious effort to recommend appropriate hardware. Part of that effort is benchmarking!

We have a new collection of GPU accelerated Molecular Dynamics benchmark packages put together for GROMACS, NAMD 2, and NAMD 3-alpha10. (The benchmark packages will be available to the public soon.) In this post we present results for,

NAMD v3 is currently at alpha 10 and is already seeing significant performance gains over v2. Being GPU resident it will not be limited by CPU performance which has been a bottleneck with v2 for several years since recent NVIDIA GPUs have such high performance. The forces computed on GPU would finish so quickly that the GPUs would starve for work waiting on multi-CPU cores to finish.

Not all methods from NAMD 2 are implemented yet. The f1atpase benchmark failed with the following message,

All jobs were run on the following CPU platform;

The input files for v3 alpha needs this additional directive,

Note the "+p1" on the command-line. NAMD 3 is "GPU resident", essentially everything runs on the GPU and only 1 CPU core is used per GPU!

GROMACS did well without Hyper/SMT threads and NAMD2 did better with them when using GPU acceleration.

There are 16 charts. 8 for the GeForce GPUs and 8 for the Professional GPUs. X-axis, i.e. performance, is the same scale for both. 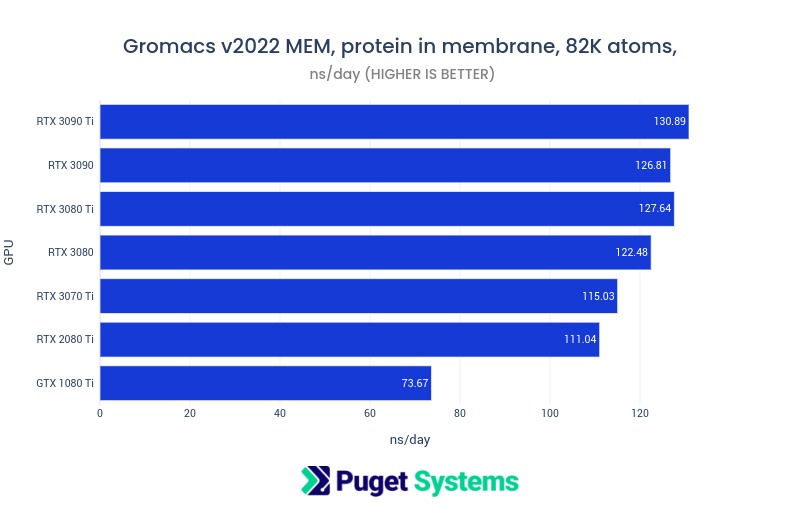 This is the first of the anomalies. GROMACS did not do well with the A6000. I repeated the benchmarks may times but it was consistent. If you have an explanation or observation please add it to the comments. 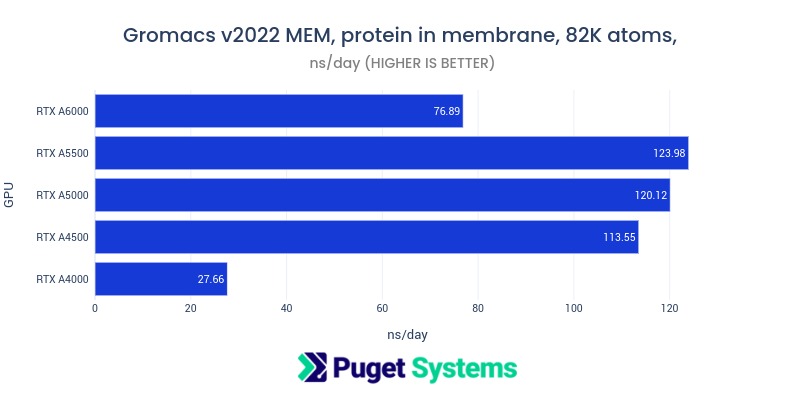 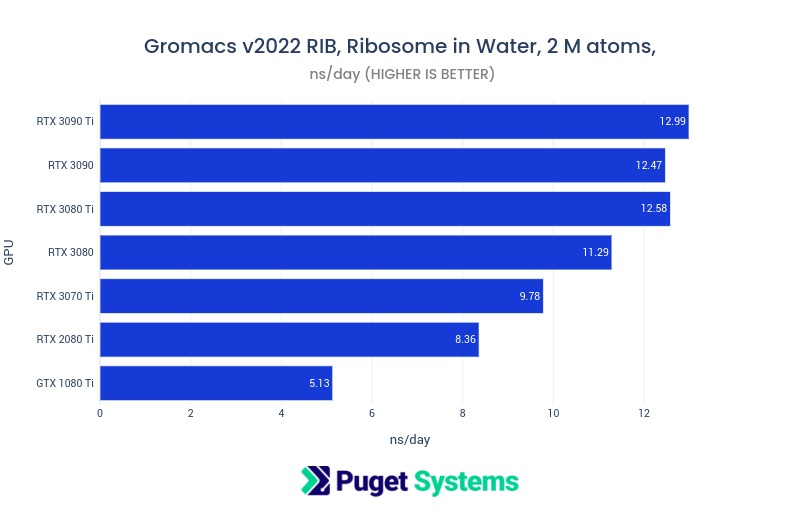 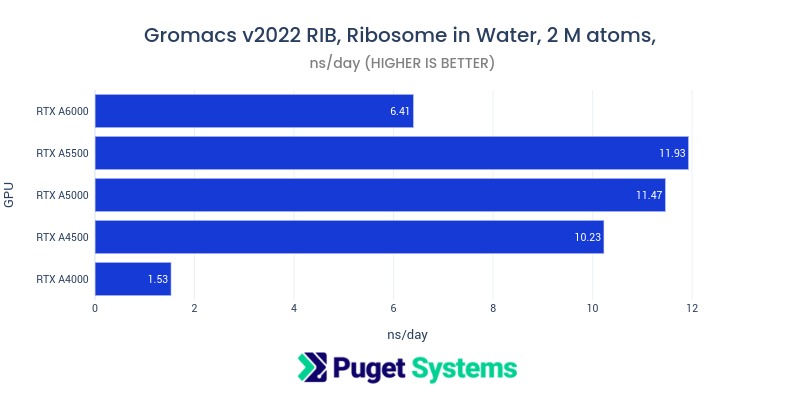 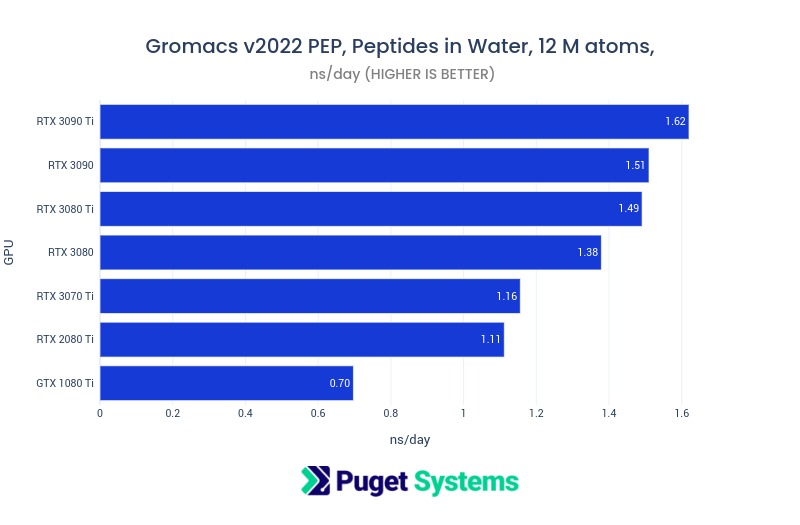 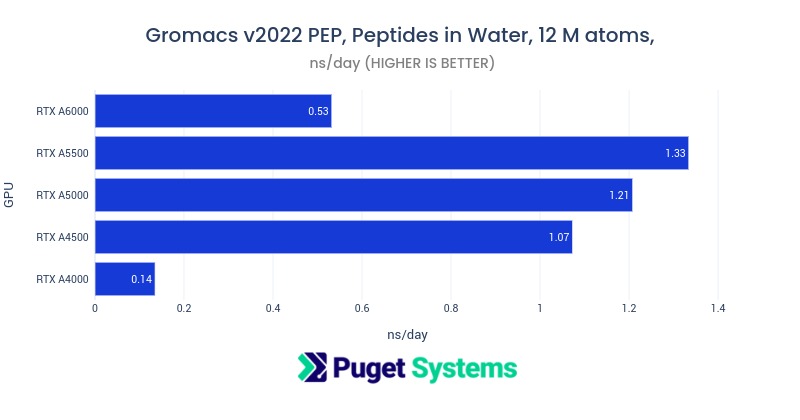 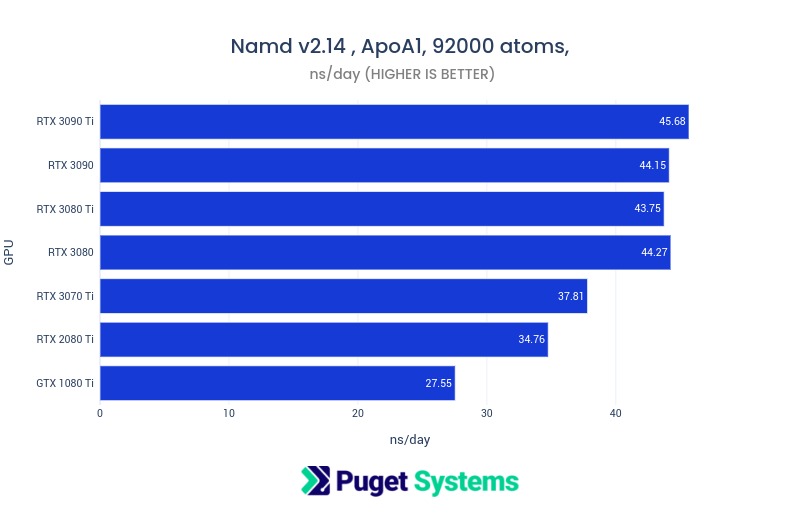 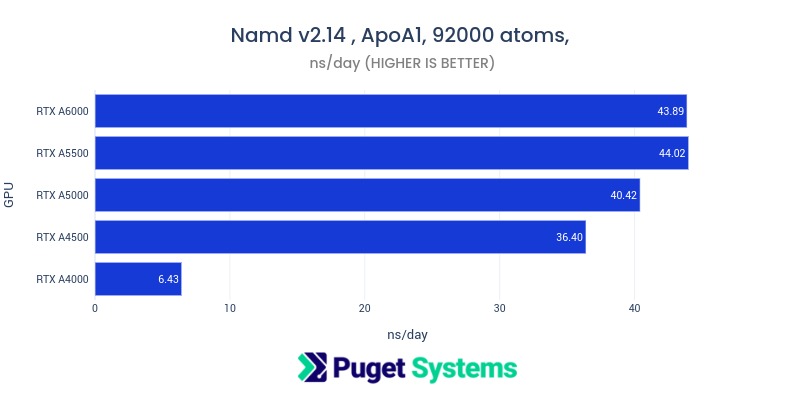 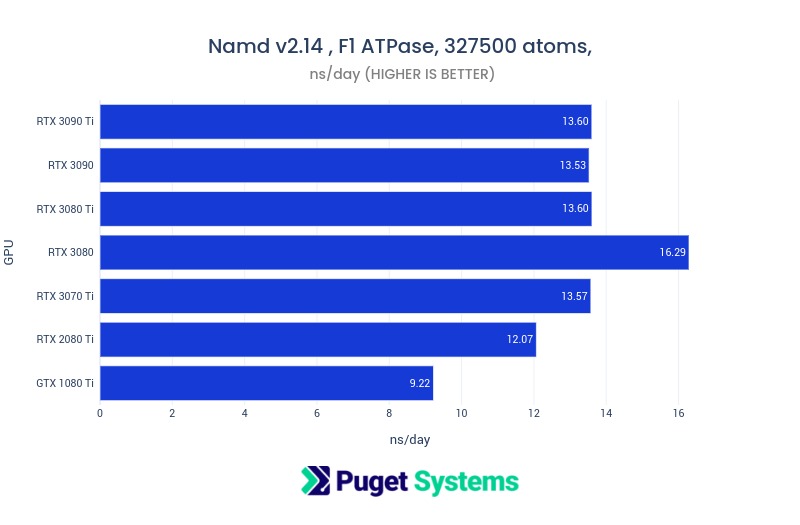 This is another anomaly. I cannot explain the great performance of the RTX 3080. This was a "Founders edition" card like all the rest.

Also not the apparent CPU bottleneck with the higher GPUs. The ATPase (f1atpase) benchmark uses more methods that are CPU dependent than the other NAMD benchmarks. Some of these methods have not yet been ported to NAMD 3, possibly because they are difficult to port entirely to GPU. 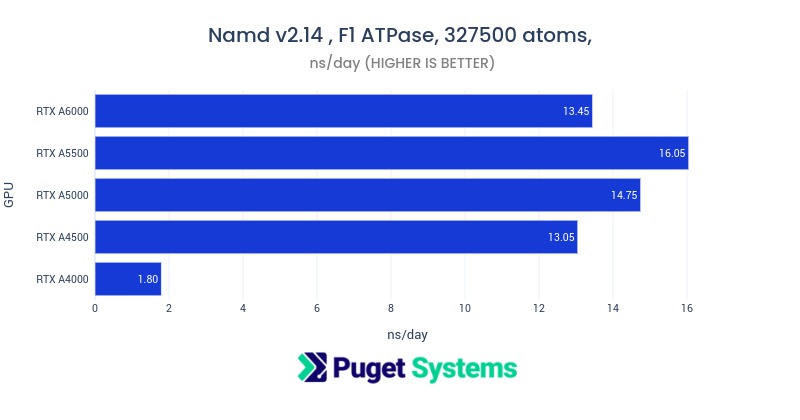 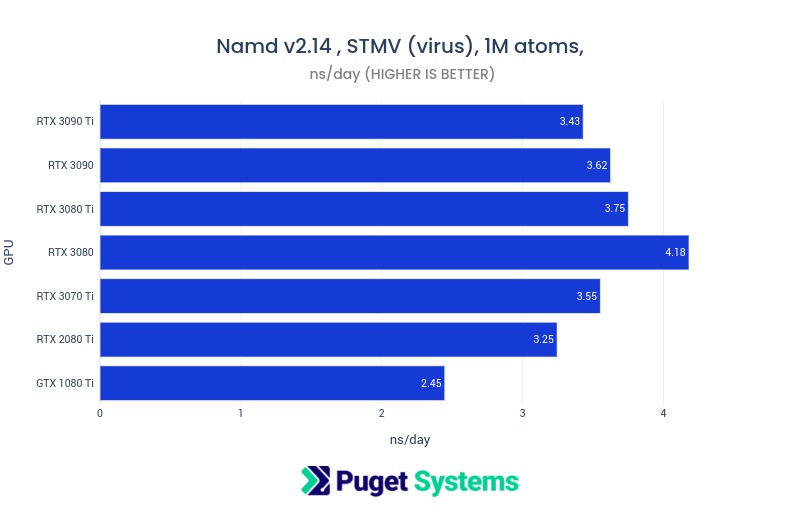 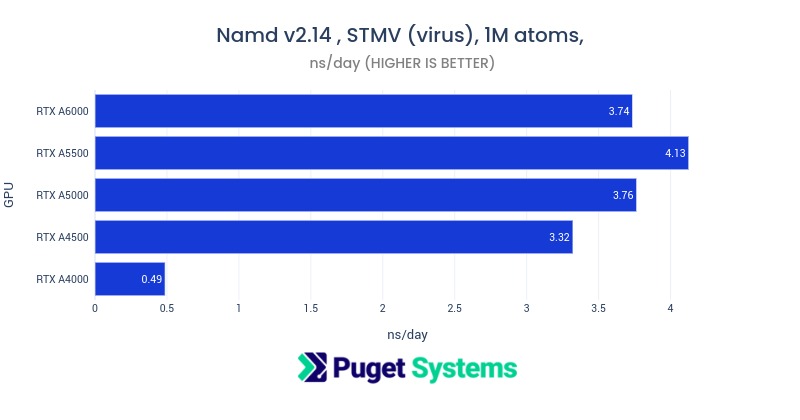 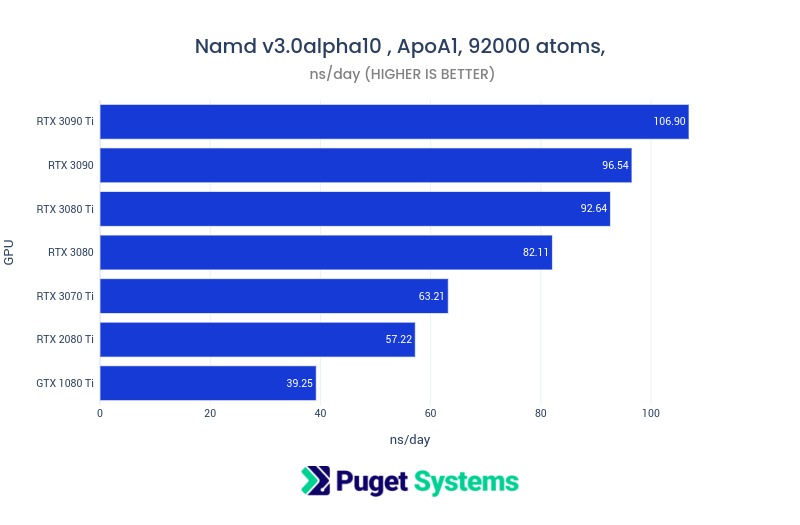 Notice how the GPU resident code of NAMD 3 alpha scales more smoothly with the specs of the GPUs and the significantly improved performance over NAMD 2. I'm Looking forward to seeing the "production" version! 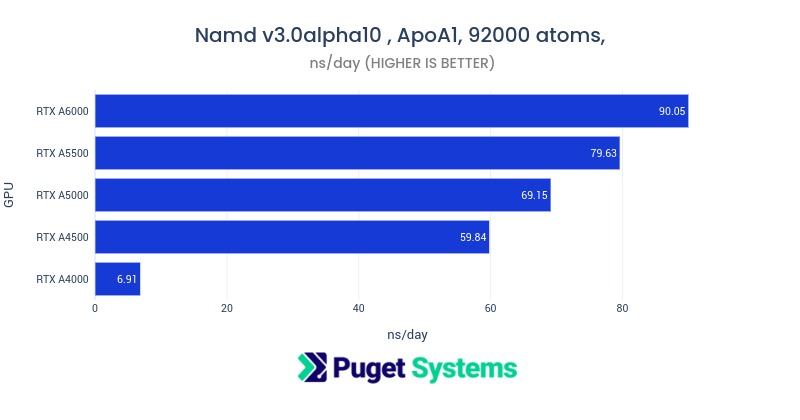 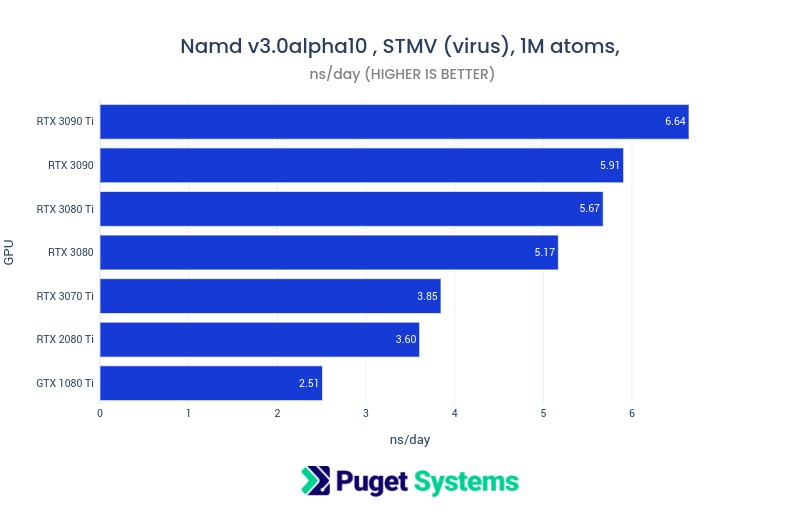 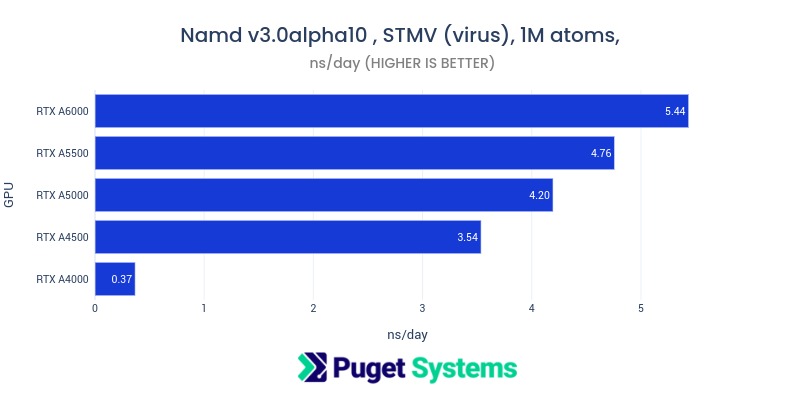 There is no denying that GeForce "gaming" GPUs can make powerful compute devices. It was experimentation on gaming GPUs that started the whole idea of general GPU compute acceleration. NVIDIA capitalized on this in the best way possible eventually leading to them becoming the most important scientific hardware vendor in history. (In my opinion.) Early adopters used gaming GPUs and Molecular Dynamics was one of the first areas of success.

Of course NVIDIA has higher-end Professional GPUs that used to be labeled as "Quadro" (after the quad buffering that was useful for stereo imaging). These (and AMD FirePro) have been the choice for serious workstation use for decades.

Beyond that there is the pinnacle of GPU compute acceleration offered by what was formerly "Tesla". GPUs like the A100 and upcoming Hopper H100 are astounding compute devices offering many advanced feature such as excellent double precision (FP64) floating point.

However, Molecular Dynamics force calculations are generally performed at FP32. Thus GeForce and Professional GPUs usually suffice. CPUs have been needed for some parts of the code that was difficult to port to GPU but the trend is to move as much as possible to the GPU since that is where the most compute performance exists. NAMD 3 alpha is an example of that.

In this post I used both GeForce and Professional GPUs since they are both worthy of consideration. For compute they are mostly the same since they use the same GPU cores. However, the RTX A series Pro GPUs are more expensive than the GeForce RTX at the same performance level. However, they offer a couple of advantages that might be worth the expenditure. They are certainly great GPUs!

I hope this testing is useful for you! It can be difficult to find performance test results on current hardware with a large enough test suite to inform decisions for system configurations. It's not feasible to test every job type and setup variation with these feature rich applications. Hopefully there is enough information in the text and charts to assist decisions.

This GPU performance "roundup" for Molecular Dynamics has been on my ToDo list for some time. The new benchmarking environment and automation was a big help. I had several ideas for improving the benchmark usability and will refactor my current code and then make it available to the public.

If I had to pick a "winner" it would have to be the RTX3080 however. Really all of these GPUs, except the A4000, give several factors of performance improvement over CPU alone.(see for example) AMD Threadripper Pro 3995x HPL HPCG NAMD Performance Testing (Preliminary)