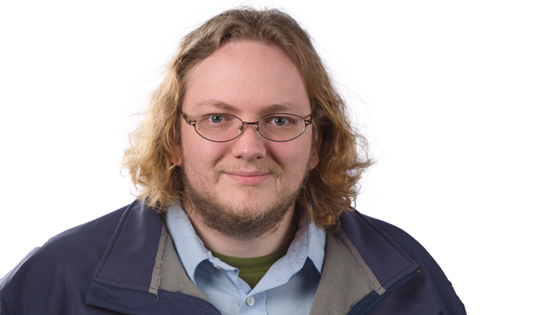 A+ Certified THEN: - before Puget - Prior to working at Puget, I served aboard the vessel of the Dread Pirate Roberts! I was promoted to First Mate before falling overboard due to a bit of blood left on deck during a battle. After I washed ashore, I wandered through the wilds of California before establishing a delightful little coffee shop. Two days after opening, the entire shop was swept up in an impossible freak tornado. It held me and my shop inside all the way up to Washington state, where I landed atop Puget Systems. It was apparently a solidly built place, as while my shop was destroyed, the Puget Systems warehouse was unharmed! I climbed down, snuck inside, and started working support, bemusing customers with my apparently mild mannered ways and technical expertise! NOW: - here at Puget - I have been here since February of 2010. I've been working support here, and have plans to get back into college come next fall. While at Puget, I have developed the annoying requirement for quiet systems, and have thus replaced all the loud components in my computers so that they're now nearly as quiet as those we ship at Puget. I spend much of my free time tinkering with Windows, gaming, and trying out new Linux distributions. I'm not really much of a Linux guru - I just haven't found the flavor I really like. MY FIRST COMPUTER: Packard Bell with a 33 MHz 486SX, 4 MB of RAM (later upgraded to a whopping 8MB), and a 200MB hard drive. Had a two speed CD-ROM drive. Ran Windows 3.11 on it. Got my first taste of DOS installing programs off of floppy disks. This was when I first realized my parents couldn't use computers - I installed a couple of games they couldn't get working. All it took was following the directions. MY DREAM COMPUTER: You know what? I'd like a mini-ITX gaming box. Small enough that I can carry it around fairly easily, but powerful enough to play just about anything maxed out at 1080p. Would probably be a bit of a pain to make, but I think I'd like it. RECOMMENDED SOFTWARE/GAME(S): Opera web browser! There are a few sites that don't care for it (include several of Google's...), but it's otherwise snappy and full of cool features. Imagine something that has almost all those cool add-ons for Firefox preinstalled - and then realize that it still performs faster on most sites than stock Firefox. When Opera won't do, the snappy Chrome does the job. VLC is my video player of choice, with Media Player Classic with being a good fallback, since it supports Windows codecs. In terms of games, Battle for Wesnoth, Ur-Quan Masters, and Nethack are all awesome and all open source. LIFE: - outside Puget's walls - You mean the stuff past the transparent barrier? It certainly looks colorful!