NVIDIA has a history of releasing "Ti" variants of their products which in most cases are simply slight upgrades to the base model. Today, NVIDIA is continuing this trend with the new NVIDIA GeForce RTX 3090 Ti 24GB. Compared to the base RTX 3090, the RTX 3090 Ti has the same amount of VRAM (24GB), but has a handful more CUDA cores that run at a slightly higher frequency. In order to handle the higher core count and frequency, however, the 3090 Ti has also received a large bump in power consumption - going from 350W to a massive 450W of power draw.

Taking into account the number of cores and the boost clock, rough math points to the RTX 3090 Ti being somewhere around 10% faster than the RTX 3090 assuming perfect GPU utilization. That is a decent bump in theoretical performance, although the nearly 30% increase in power/heat - as well as the much higher price - is going to make it a tough upgrade for some users.

In recent years, Adobe has been adding more and more GPU acceleration to Premiere Pro - including GPU-based hardware decoding and encoding for H.264 and HEVC media - which has made the video card an increasingly important part of a Premiere Pro workstation. However, many workflows often don't see a benefit going above a mid-range GPU, so the question is whether the RTX 3090 Ti will be able to provide any sort of tangible benefit for Premiere Pro users. 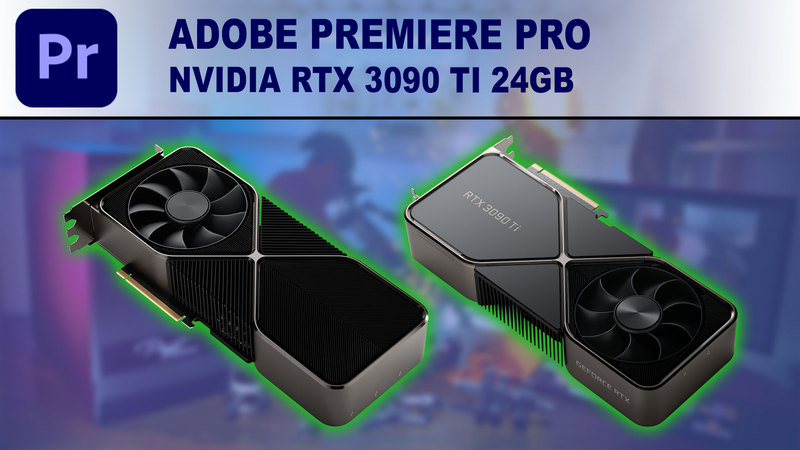 As we noted earlier, the RTX 3090 Ti is a slightly more powerful version of the RTX 3090 - only with a much larger power draw and price tag. While we are going to focus purely on performance in this article, it is definitely worth noting that the 3090 Ti is going to be both louder and hotter than any other RTX 3000 series card due to the much higher power draw. This can be a significant concern if your system does not have adequate cooling or a large enough power supply, so be sure to keep that in mind if you are considering getting an RTX 3090 Ti.

To see how the RTX 3090 Ti performs in Premiere Pro, we will be comparing it to the full range of RTX 3000 series GPUs as well as the AMD Radeon RX 6900XT. The test system we will be using is one of the fastest platforms currently available for Premiere Pro and built around the AMD Threadripper Pro 3975WX. Since Premiere Pro utilizes the CPU so heavily, this should minimize the impact of the processor and allow each GPU to perform at its fullest potential.

For the testing itself, we will be using our PugetBench for Premiere Pro benchmark. This tests a number of different codecs and includes a dedicated "GPU Stress" test that is meant to put as much load on the GPU as possible while still staying within the realm of what someone might actually do in the real world. If you wish to run our benchmark yourself, you can download the benchmark and compare your results to thousands of user-submitted results in our PugetBench database. 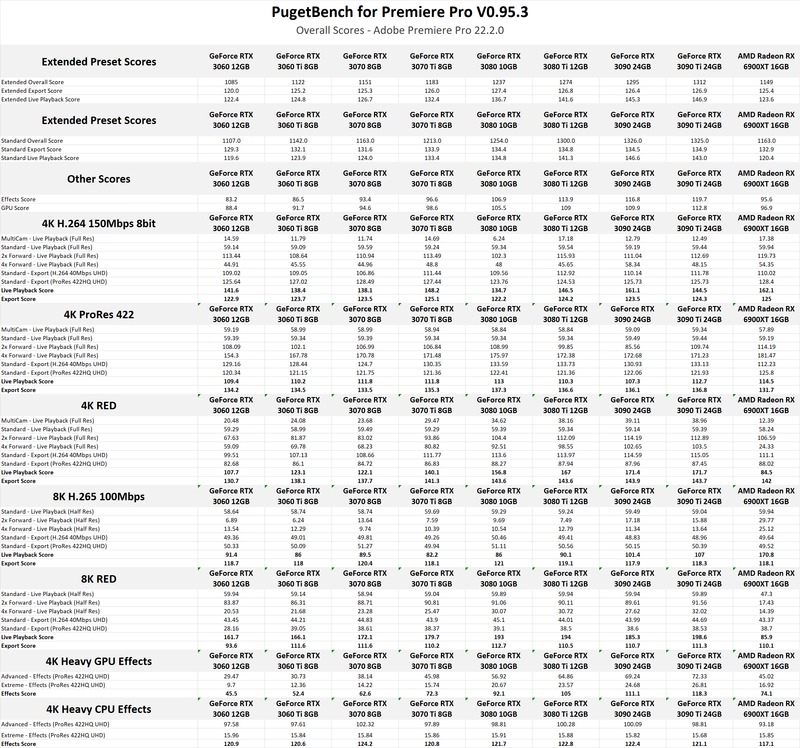 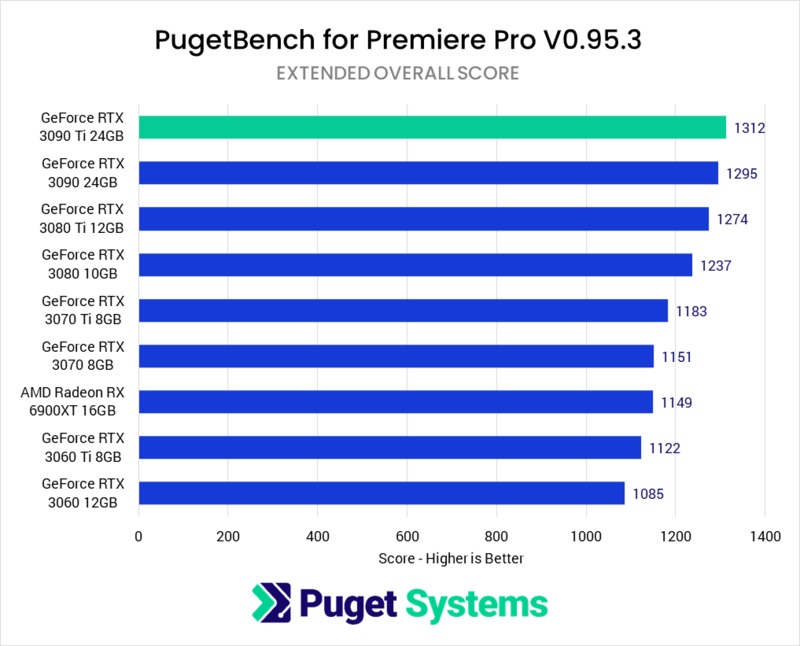 From an overall perspective, having a higher-end GPU isn't going to make a massive difference in Premiere Pro. For each step up in model, you are only looking at a few percent higher performance. This holds true for the RTX 3090 Ti as well, since it only scored about 1.3% higher than the RTX 3090.

Keep in mind that while the Overall Score is a great way to get a sense of general performance in Premiere Pro, the tests that comprise this score includes quite a number that are heavily CPU limited. For example, playing or exporting ProRes footage does not utilize the GPU, and neither does our dedicated CPU Effects test. This is still a fairly good indication of what the average Premiere Pro user may experience overall, but we can dive into specific situations where a more powerful GPU should net you more significant performance gains. 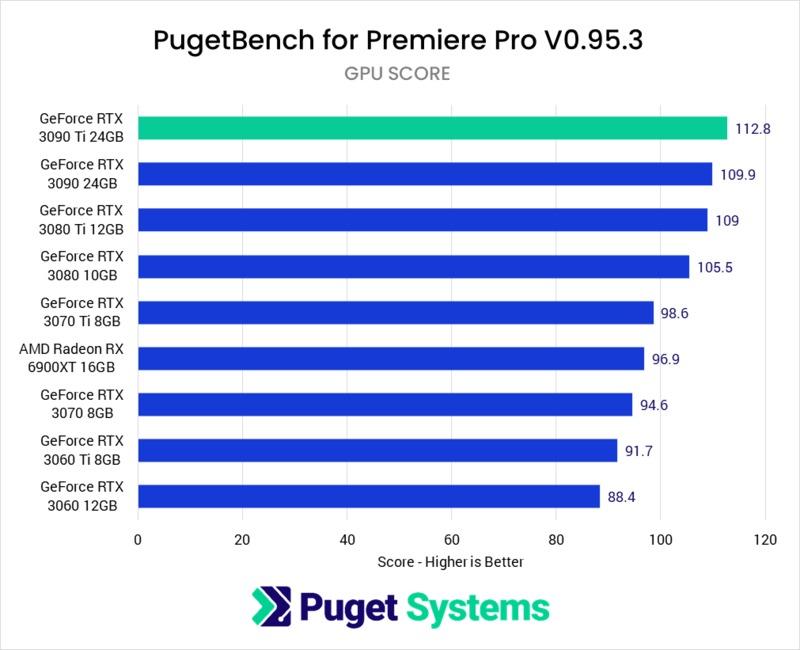 In this test, we get a bit wider of a range in GPU performance, although there is diminishing returns after around the RTX 3080 level. Because of this, the RTX 3090 Ti only ended up being about 3% faster than the RTX 3090. In fact, the total performance delta between the fastest (RTX 3090 Ti) and slowest (RTX 3060) result is only about 25%. That means that even in these tests - which make decent use of the GPU - there is not a huge return on investment for performance when it comes to using higher-end GPUs.

However, there are a few other cases where a more powerful GPU can make a measurable impact in Premiere Pro: 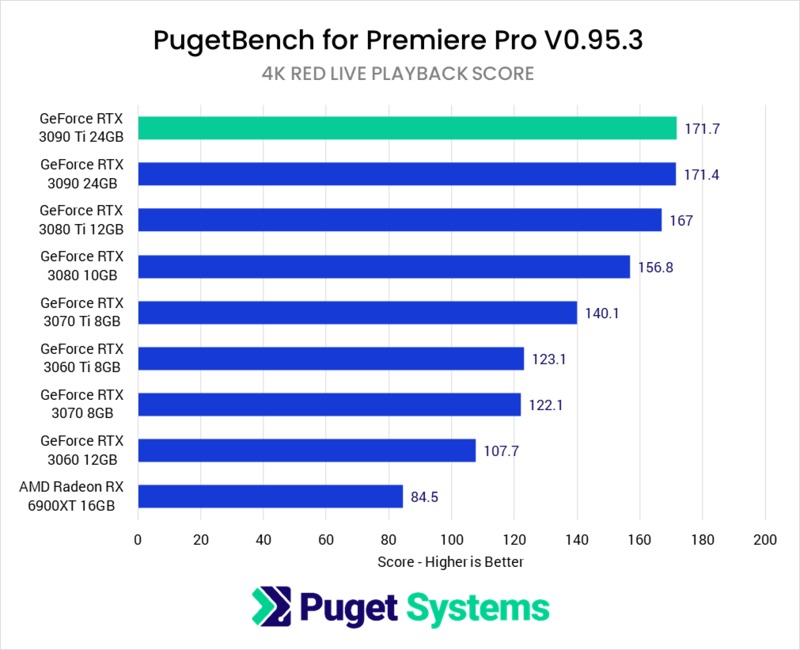 GPU-based effects and hardware encoding may be the most common use of the GPU in Premiere Pro, but there are a number of other niche use cases that can be even more important for some users. One of these is for those that work with REDCODE RAW footage in Premiere Pro since RED footage can utilize the GPU to handle the debayering process (converting the raw sensor data to a usable image). As long as your CPU is powerful enough to not be a bottleneck, a faster GPU can make a huge difference in how fast Premiere Pro is able to play and export timelines that include RED media.

Looking at the 4K RED Live Playback score, we get a great look at just how useful a more powerful GPU can be in this type of workflow. Rather than only a 25% difference between the fastest and slowest GPU, here, having a powerful GPU can make playback as much as 2x faster.

Unfortunately, there is still the issue of diminishing returns. The RTX 3090 Ti may be more powerful than the RTX 3090 on paper, but when working with RED media it ended up performing almost identically to the RTX 3090. This is more likely to be an issue with the CPU becoming a bottleneck than anything else, but since we are using what is arguably the fastest CPU on the market for this kind of workload, it just goes to show how important it is to have a properly balanced system.

How well does the NVIDIA GeForce RTX 3090 Ti perform in Premiere Pro?

There are always going to be those who are willing to invest in anything that gives even a minor boost to performance, but we want to again mention that if you do decide to use the RTX 3090 Ti, it will be both louder and hotter than any other RTX 3000 series card due to the much higher power draw. Not only will you need a decent power supply to power the card, but also and a chassis with plenty of airflow to keep the GPU cool. If either of those are not up to the task, power draw or thermal throttling may well end up causing the RTX 3090 Ti to actually end up performing slower than the lower wattage cards like the RTX 3090.

As always, keep in mind that these results are strictly for Premiere Pro. If you have performance concerns for other applications in your workflow, we highly recommend checking out our Hardware Articles (you can filter by "Video Card") for the latest information on how a range of applications perform with the latest NVIDIA and AMD GPUs, as well as with different CPUs and other hardware.