While the launch of NVIDIA and AMD's consumer GPUs have been a major topic in recent months, NVIDIA is also starting to release the successor to their Quadro RTX line - starting with the RTX A6000. The NVIDIA RTX A6000 is a very powerful card, featuring 48GB of VRAM and significantly higher specs than the Quadro RTX 6000/8000 from the previous generation.

Workstation cards, on the other hand, are all about specialty features that are not necessary for most consumer workflows including higher VRAM capacity, ECC VRAM, vGPU support, and Quadro Sync. More importantly for many users, they also have a strong focus on stability. Not only do workstation drivers get more validation for professional applications, but the hardware itself is also more reliable. In fact, over the last three years (Jan 2018 to Jan 2021), we have seen about 3x higher reliability in the field with Quadro cards over GeForce (.33% failure rate versus .91%).

In addition, another advantage for workstation cards that can be a factor for some workflows is that they are designed with multi-GPU configurations in mind. There are some blower-style NVIDIA GeForce cards that allow you to install up to four GPUs in a workstation, but having more than one or two GeForce cards installed in a system is not something that NVIDIA specifically designs them for.

To see how the new NVIDIA RTX A6000 performs in real-world scenarios, we have reviews looking at a number of content creation applications. While this post includes a summary for each entry, we highly recommend reading the full article for programs you are interested in as we go into much greater detail in the individual reviews. 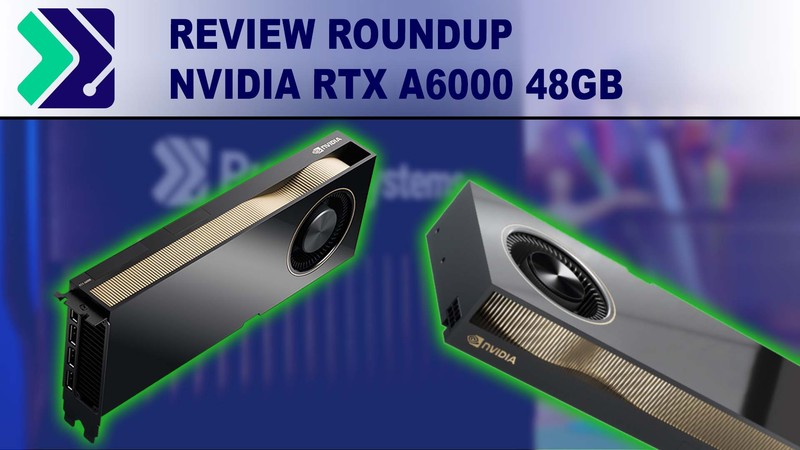 48GB of VRAM may not be necessary for many workflows, but can be critical if you work with ultra high-resolution media in applications like DaVinci Resolve, or rendering large scenes in GPU-based rendering engines like Octane Render. Considering that the RTX A6000 48GB is $850 less than the RTX 8000 48GB (which adds up quickly if you want multiple GPUs), the A6000 is already attractive from a straight price perspective - not to mention any performance improvements there may also be.

Summary: With nearly a 70% increase in rendering performance of the previous generation Quadros, the RTX A6000 is a great card for Octane. While the NVIDIA RTX A6000 is ideal for rendering large scenes with its 48GB of VRAM and NVLink support, there are less expensive options in the GeForce line with less VRAM, a trade-off that will be acceptable for many users. 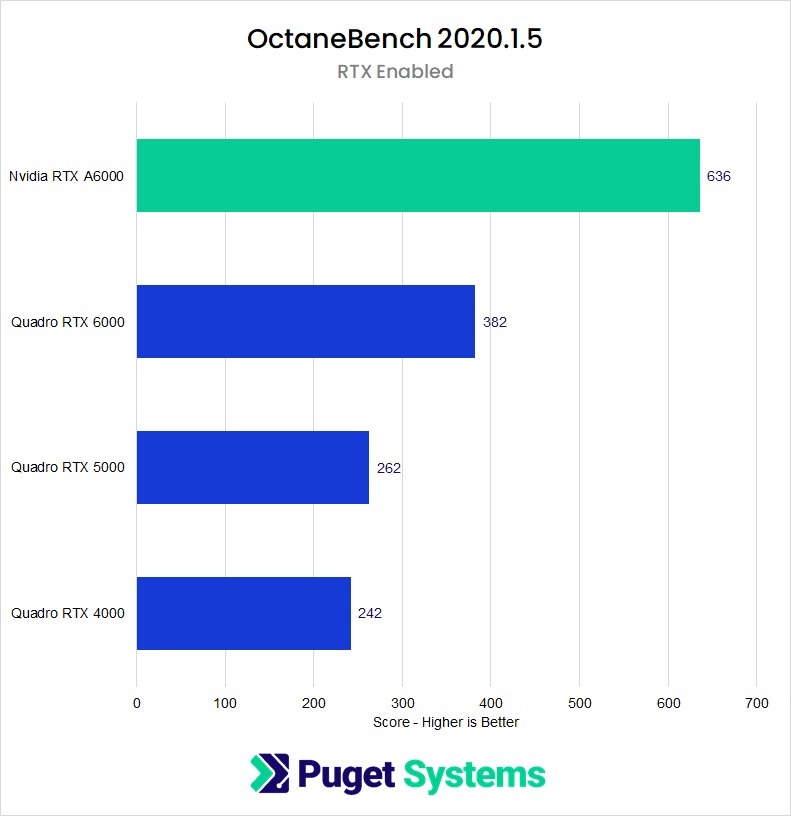 Summary: The NVIDIA RTX A6000 has nearly 40% faster rendering performance than the previous generation Quadros. While that isn't as much as other rendering engines, it is still very impressive given its price, massive 48GB of VRAM, and NVLink support. There are less expensive options in the GeForce line with less VRAM, a trade-off that will be acceptable for many users. 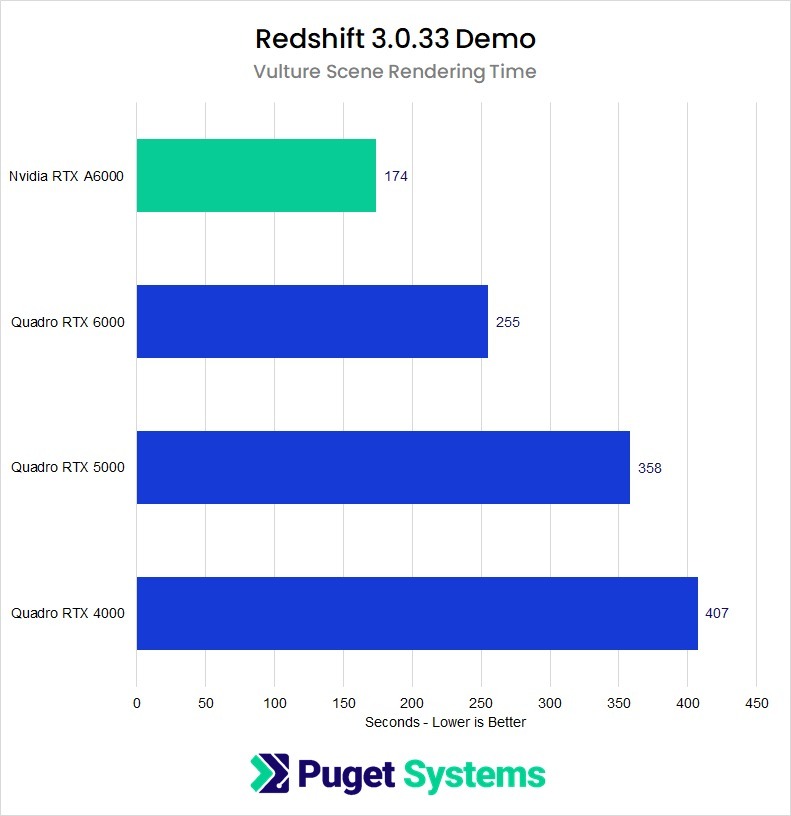 Summary: The NVIDIA RTX A6000 is ideal for rendering large scenes with its 48GB of VRAM and NVLink support. Nearly doubling the performance of the previous generation Quadros. There are less expensive options in the GeForce line with less VRAM, a trade-off that will be acceptable for many users. 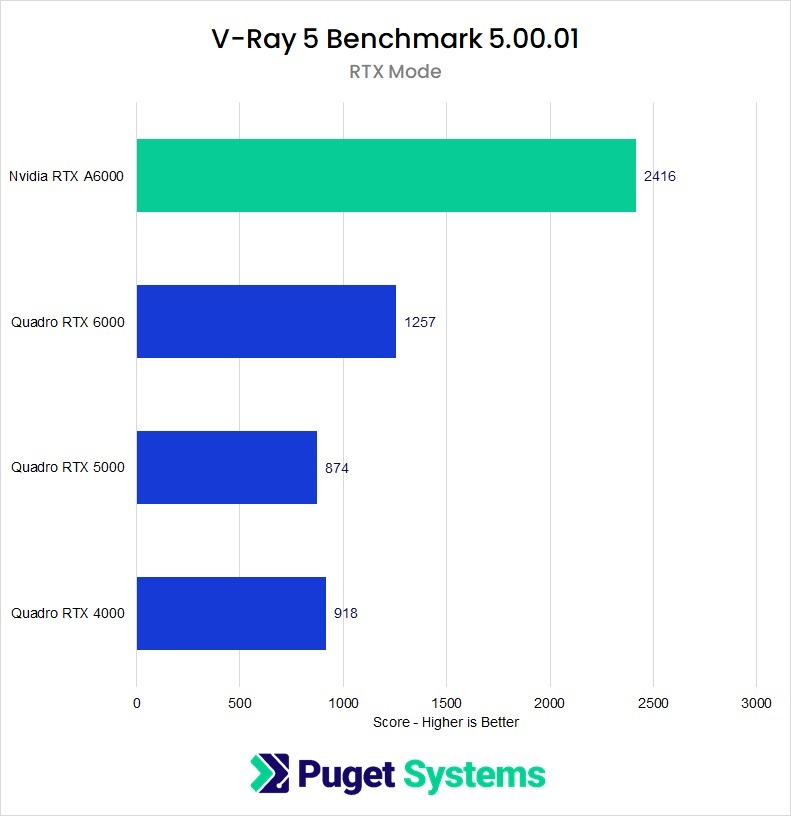 Summary: Most users of Unreal Engine don't need the features offered by NVIDIA's professional line of video cards. However, many users require the additional features these cards offer, such as Quadro Sync, or large amounts of VRAM. The RTX A6000 provides up to an 80% increase in performance over the Quadro RTX 8000 while costing a few hundred dollars less. Anyone powering a large LED volume, or pushing visual fidelity to the limits will see massive gains with this card. This is by far the fastest workstation-grade card available. 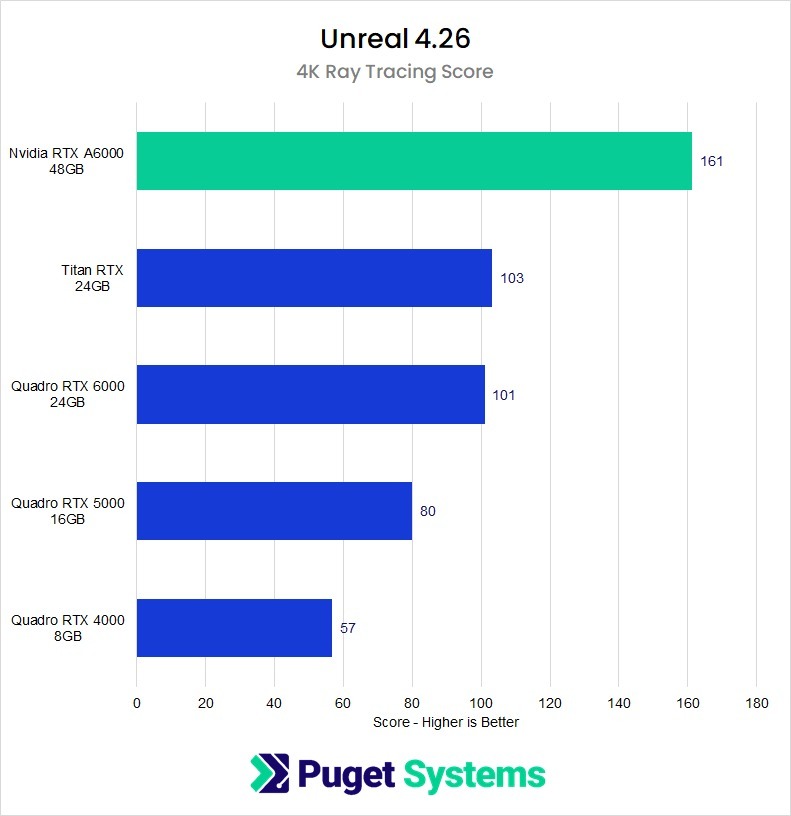 Summary: While the higher cost of workstation-class hardware like the A6000 may put it outside the budget of many, for those that need 48GB of VRAM or where system uptime is worth the investment, the NVIDIA RTX A6000 48GB is a terrific choice. When the GPU is being heavily used in DaVinci Resolve, the RTX A6000 is about 32% faster than the previous generation RTX 6000/8000, and more than 2.25x faster than the Quadro P6000 from two generations ago! It is also around 75% faster than the fastest AMD Radeon Pro GPU, making it easily the fastest workstation card currently available for DaVinci Resolve. 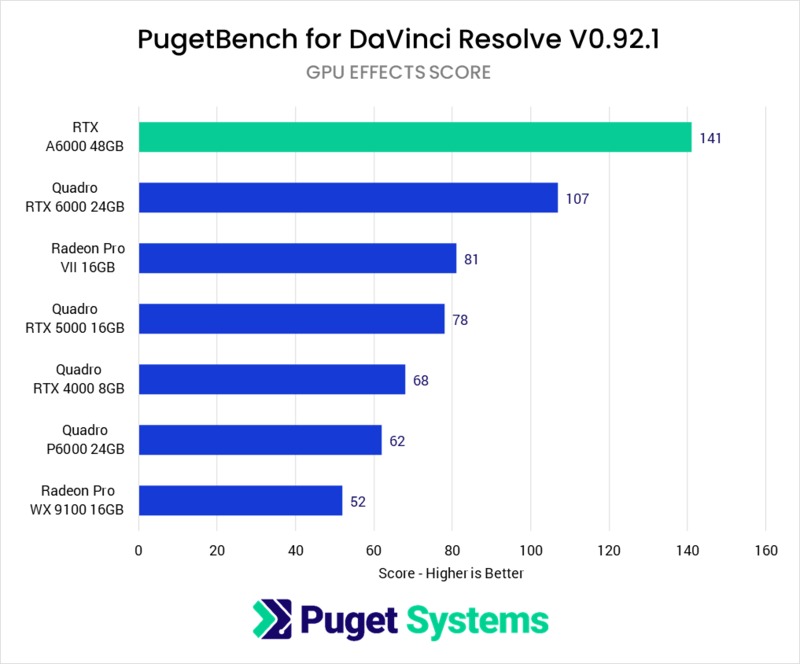 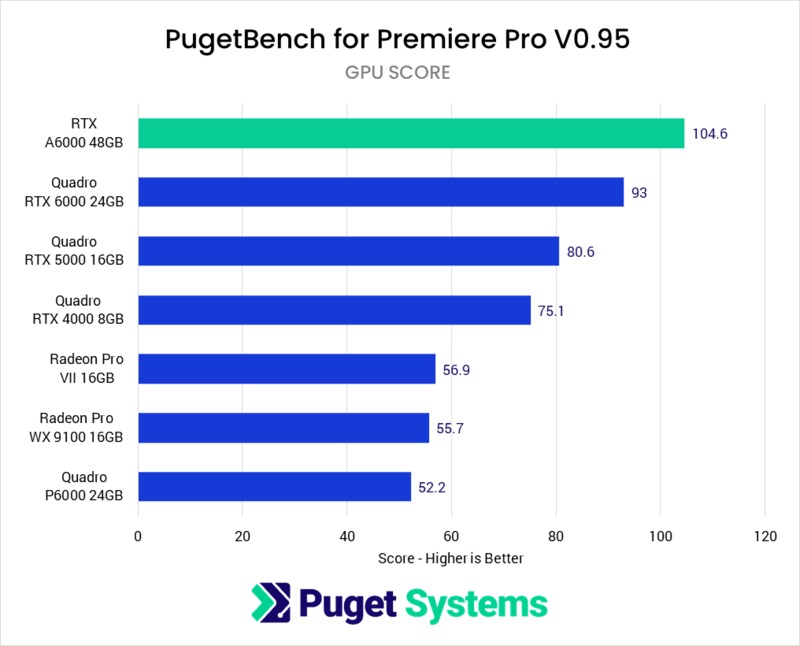 Summary: For most users, After Effects is going to be CPU bottlenecked long before the performance of your GPU comes into play. But in situations where the GPU is being heavily used, the NVIDIA RTX A6000 48GB can be a small 8% faster than the Quadro RTX 6000 24GB or RTX 8000 48GB. However, compared to slightly older cards like the Quadro P6000 24GB, the RTX A6000 can be as much as 27% faster. 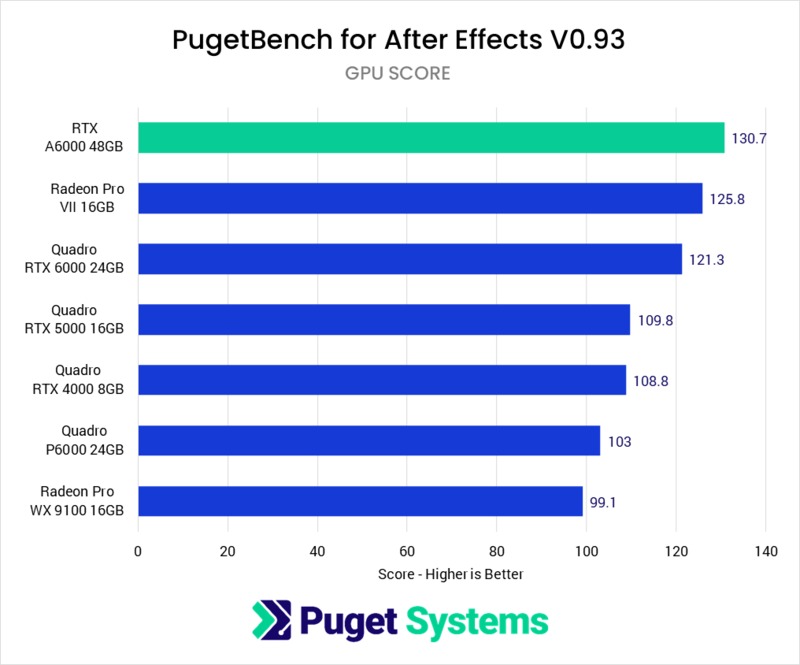 Summary: While the new NVIDIA RTX A6000 performs just fine in Photoshop, the GPU is a very low priority when designing a Photoshop workstation. It is very important to have a supported GPU, but all the cards we tested performed overall within the margin of error for our benchmark, so there is no reason to invest in a higher-end GPU for Photoshop. At most, if you have a GPU that is a few generations old, you may see up to about a 10% increase in performance with the RTX A6000 for the portions of Photoshop that utilize the GPU, but that is a small increase in performance relative to the cost of a workstation card like the RTX A6000. 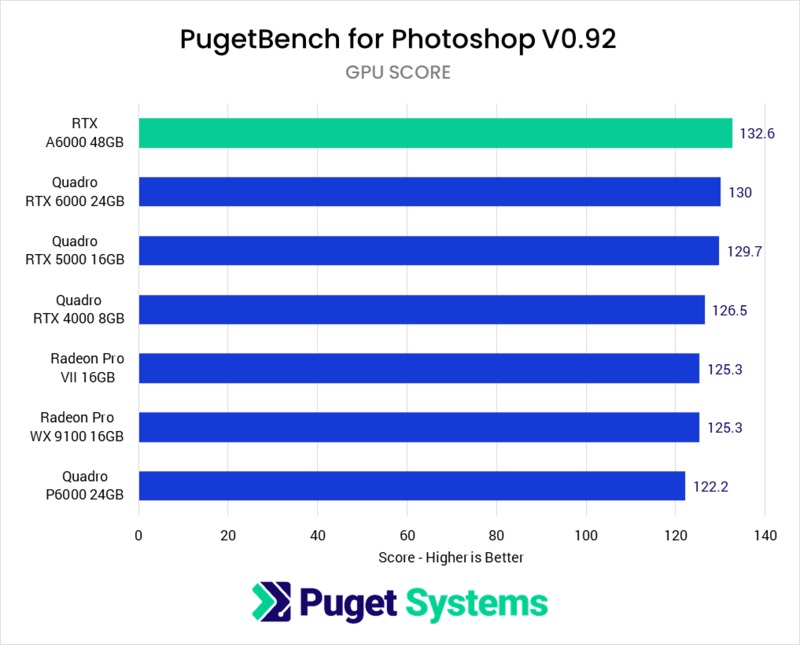 How well does the NVIDIA RTX A6000 48GB perform overall?

In terms of pure performance, the NVIDIA RTX A6000 48GB is easily the fastest workstation-class GPU we have ever tested. However, it is important to understand that different applications utilize the GPU in very different ways.

In GPU render engines like OctaneRender, Redshift, and V-Ray, the RTX A6000 greatly out-performs the previous generation Quadro cards, seeing anywhere from 30% to a huge 90% performance increase over the Quadro RTX 6000/8000. Being able to get 48GB of VRAM at a lower cost than the Quadro RTX 8000 is another boon for many VFX artists as it allows for larger and more complex scenes to be rendered through the GPU.

Unreal Engine also saw massive performance gains of around 60% over the Quadro RTX 6000/8000. The larger VRAM can again be a large benefit for many emerging workflows such as using Unreal Engine for virtual production.

For applications that are a bit more CPU-limited like DaVinci Resolve or the Adobe Creative Cloud suite, the results are more mixed. In DaVinci Resolve, the RTX 3080 can still be up to 32% faster than the Quadro RTX 6000/8000 in certain situations. However, these performance gains drop to just 8-13% in Premiere Pro and After Effects, and almost nothing in Photoshop where GPU acceleration is far less pronounced.

One thing to note is that multi-GPU configurations - which can be a major consideration for some of these applications - are still up in the air at the moment. We don't have any concerns in terms of cooling as the RTX A6000 features a blower-style cooler that is optimal for stacking multiple GPUs in a system, but power draw is something we need to investigate further. When we tested using four RTX 3090 GPUs in our Quad GeForce RTX 3090 in a desktop - Does it work? article, we found that four of those cards was too much for a standard 1600W power supply. The RTX A6000 is supposed to use 50W less than the RTX 3090 which should be enough to put it under the 1600W max limit for most workstations, but specifications for power draw is not as clear as it may seem since the amount of power a GPU consumes can change due to how cards can boost when under load. Once we have our hands on four RTX A6000 GPUs, however, this is something we will be immediately testing!

Supply is currently still very tight for the RTX A6000, but if you are in the market for a system, be sure to visit our solutions page to view our recommended workstations for various software packages, our custom configuration page, or contact one of our technology consultants.