With NVIDIA's recent release of the GeForce RTX 2080 and 2080 Ti, we wanted to see how these new graphics cards stack up to the well-respected 1080 Ti and the top-end Titan V.

In order to test the most recent video cards, we took the OctaneBench program and modified it slightly. As of this publication, OctaneBench is still using the 3.06.2 version of OTOY's rendering engine - which does not support either the Titan V or the new GeForce RTX cards. However, you can manually copy over the files from 3.08 into the folder containing OctaneBench and then it will use the newer rendering engine. We cannot redistribute the modified software, but if you download both OctaneBench 3.06.2 and the demo version of OctaneRender 3.08 it is pretty easy to copy over the necessary files.

For our test platform, we wanted to use a high-end processor so that there is no way it is limiting any of the video cards. Since we are looking at single GPUs (sadly we only have one RTX 2080 Ti at this time) we didn't worry about supporting a maximum number of cards. If you would like full details on the hardware configuration we tested on, just click here to expand a detailed list.

Here are the OctaneBench 3.08 scores for each of the video cards we tested: 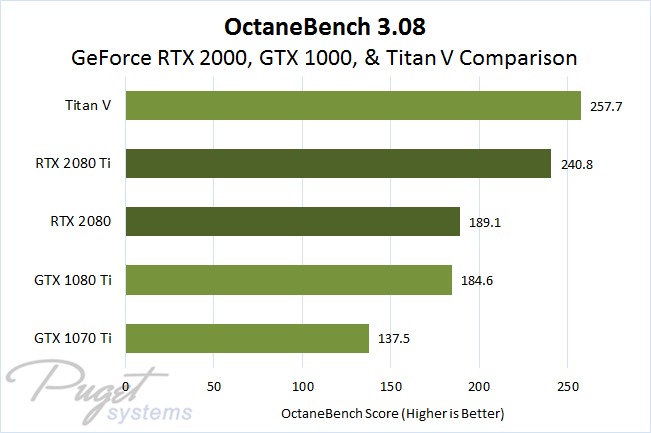 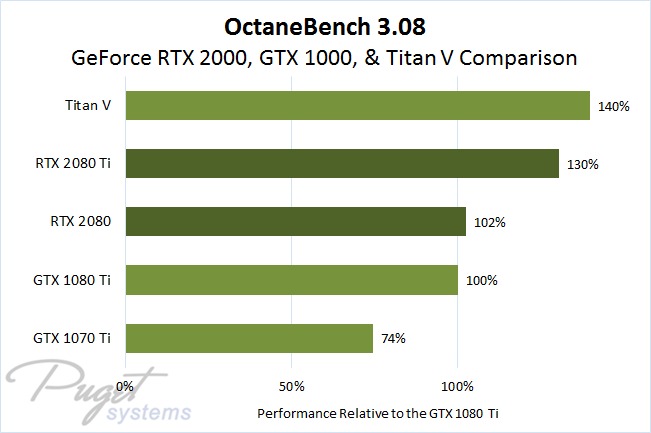 It is a little tricky to interpret raw benchmark times into actionable information, as in the first graph above, but the second chart makes things much clearer. The new GeForce RTX 2080 is neck and neck (only 2% faster) than the similarly-priced GTX 1080 Ti from the previous generation, though it has less dedicated video memory (8 vs 11GB) - so for folks working with larger scenes it may make sense to stick with the 1080 Ti in that price range. For those with a little more to spend, the RTX 2080 Ti comes in 30% faster than the GTX 1080 Ti - and not very far behind the much more expensive Titan V, while still having a respectable 11GB of VRAM.

Keep in mind that these are only single-card scores, and doubling (or tripling/quadrupling) up on video cards can give even more impressive results. However, we have found that the dual-fan coolers used by NVIDIA on these new GeForce RTX cards are problematic when used in multi-GPU configurations. For more information about that, check out our in-depth look at that topic.

Finally, it is worth noting that this version of OctaneRender is not yet able to utilize the new RT cores which NVIDIA added to this generation of GPUs. Those are purpose-built for raytracing, and if Octane is updated to use them in the future we could see a huge increase in performance. We will be sure to test these cards again if or when that technology is integrated into this rendering engine.

The GeForce RTX GPUs do very well in Octane, especially the 2080 Ti, but their true potential is the dedicated RT cores for raytracing. When OctaneRender is updated to use those, we could see a leap in performance! Avoid using dual-fan cards in multi-GPU configurations, though. If you want multiple cards, wait for single-fan blower models.