In the PC industry, there are typically three different classes of hardware: Consumer, Workstation, and Server. There is often a lot of crossover between these categories, but the current breakdown of Intel's more popular processor lines is as follows:

Of course, this doesn't mean you can't use an Intel 9th Gen processor in a workstation (we often do for lightly-threaded workloads), but as far as the intent of the product line goes, this is a fairly reasonable - if simplified - summary.

One of the biggest overlaps tends to be between the Intel X-series and Xeon W product families. The X-series CPUs are much less expensive, but the new Xeon W-3200 processors are available in even higher core counts (28 vs 18 cores), support Registered ECC memory, and have 64 PCI-E lanes which often makes them a much better choice for quad-GPU workstations.

While looking at straight performance is not really a fair comparison due to these additional features, here is how the Xeon W-3200 processors we will be testing in this article compare in terms of basic specs to their X-series counterparts:

As you can see, there is certainly a price premium for the Xeon CPUs, although there is an argument to be made that the Xeon W-3245 is actually priced in line with the X-series processors. Compared to the i9 9960X 16 Core, the W-3245 has a slightly higher maximum Turbo Boost frequency as well as a higher base clock which generally means a higher all-core Turbo frequency. The price is actually the same(ish) as the Core i9 9980XE, which essentially makes it a higher frequency, lower core count version of that model.

Given the fact that the vast majority of apps do not scale well enough to really take advantage of this high of a core count, this may actually make the W-3245 better than the X-series processors from a price-to-performance standpoint in many applications. 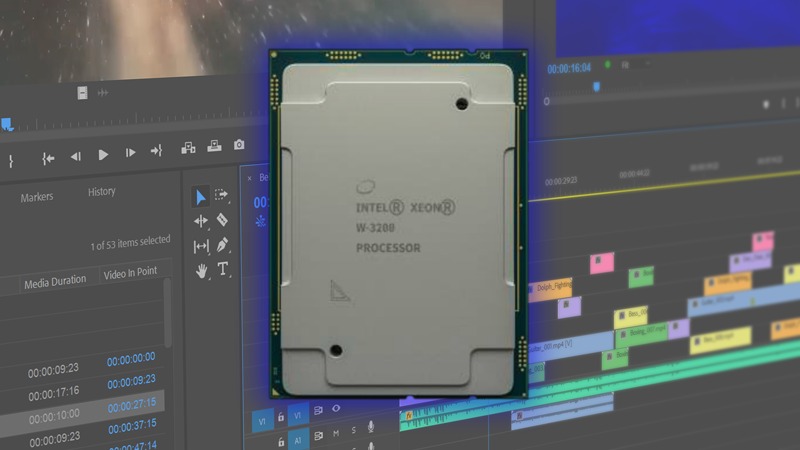 While the choice between these two product lines is often decided by more than straight-up performance, it is still useful to know exactly how the performance compares. To that end, we decided to benchmark the Intel X-series, Intel Xeon W-3200 series, as well as the AMD Threadripper processors in a range of applications including Premiere Pro, After Effects, Photoshop, and DaVinci Resolve.

Note that this article shares testing data with our recent "CPU Roundup: AMD Ryzen 3, AMD Threadripper 2, Intel 9th Gen, Intel X-series" articles for Premiere Pro, After Effects, DaVinci Resolve, and Photoshop. So if you wish to know how these Xeon W-3200 processors compare against any of those product lines, the scores can be directly compared.

The benchmarks we will be using are the latest release of our public benchmarks, plus NeatBench 5. Full details on what is tested as well as links to download and run them yourself are available at:

While our benchmarks present various scores based on the performance of each test, we also wanted to provide the individual results. If there is a specific task that is a hindrance to your workflow, examining the raw results for that task is going to be much more applicable than any of the overall scores. Feel free to skip to the next sections for our analysis of these results if you rather get a wider view of how each CPU performs. 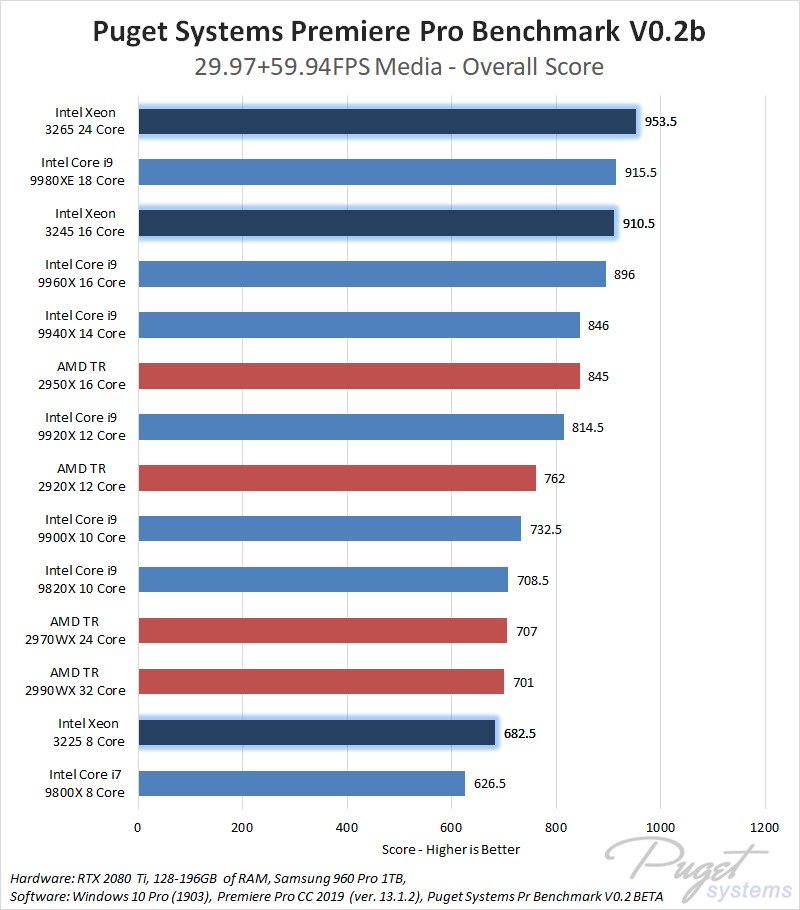 Starting off with Premiere Pro, the Intel Xeon W-3200 series processors perform exactly how you would expect them to given their specs. Xeon processors are of course more expensive than their Core counterparts due to the additional features they support, but it is good to see that from a performance standpoint, they are right on the money. 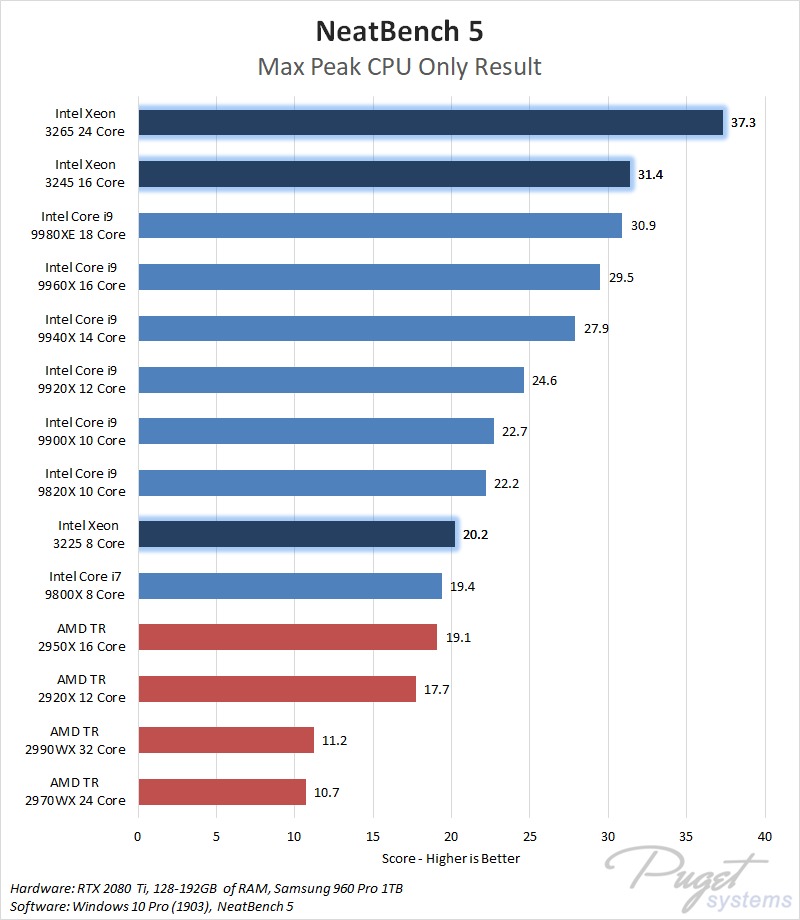 Neat Video is a noise reduction plugin that is currently one of the more popular options available. Plug-ins in general are something we plan on taking a look at more in the future, and Neat Video is a great place to start since they have an excellent stand-alone benchmark called NeatBench. Neat Video can use either the CPU, the GPU, or a combination of both, but since using the GPU often overshadows the CPU we decided to just look at the "Max CPU Only" result.

Here, the Intel Xeon W-3200 series processors do extremely well. We expected this from the W-3265 24 Core processor due to the fact that Neat Video scales well with higher core counts, but a 20% improvement over the Core i9 9980XE is more than we anticipated. The W-3245 16 Core also did better than we expected, coming in at ~6% faster than the Core i9 9960X 16 Core. In fact, the W-3245 even holds up on a pure price-to-performance standpoint as it costs about the same as the Core i9 9980XE, yet is slightly faster.

Overall, this is a great win for the Intel Xeon W-3200 series processors. You typically expect to give up a certain amount of "performance-per-dollar" value in order to gain ECC memory and 64 PCI-E lane support, but at least for this benchmark, that actually isn't a major concern. 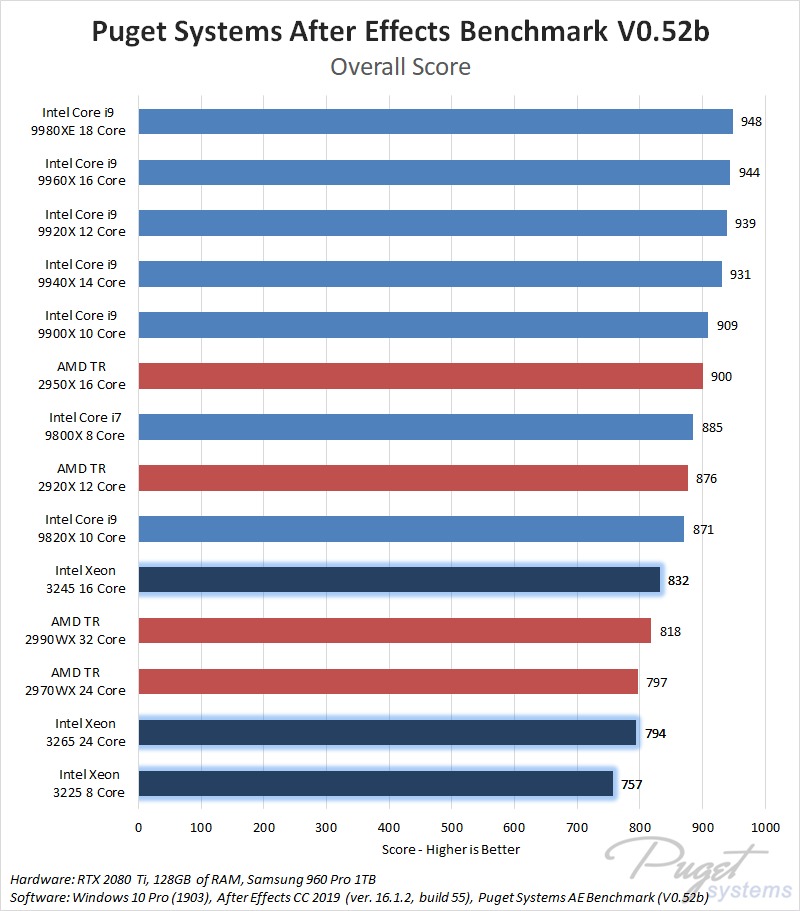 Unlike Premiere Pro and Neat Video, in most cases After Effects is not terribly great at using even a moderate number of CPU cores. Theoretically this shouldn't be a problem for the Xeon W-3200 processors since they have similar core counts and Turbo Boost frequencies as the X-series CPUs, but oddly enough, the Xeon W-3200 processors actually did very poorly in our After Effects benchmark.

We don't really have an explanation for why the performance was so poor at the moment, but the results were consistent across multiple runs of the benchmark. After Effects can be sensitive to memory performance, so it may be due to an issue between AE and the 6-channel memory, but it will require further investigation to find out for sure.

However, one thing we will point out is that we saw a similar performance issue with our DaVinci Resolve Fusion benchmark in the next section. Fusion utilizes hardware in a very similar way to After Effects, so whatever the issue is, it appears to not be isolated to just After Effects. 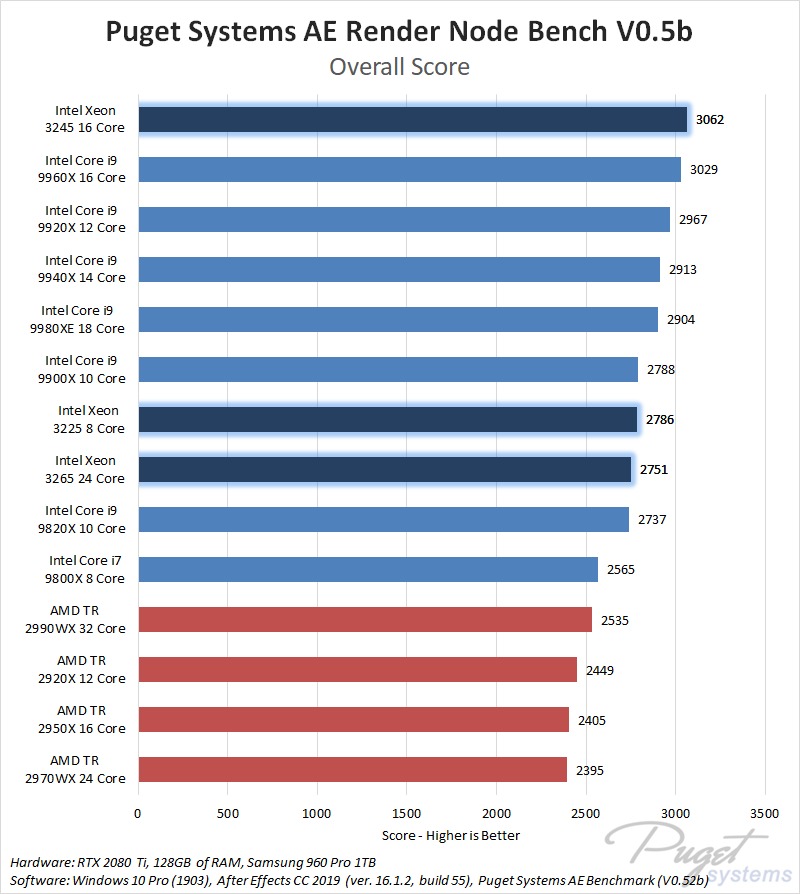 One way to get After Effects to take advantage of higher core counts when rendering is to spawn multiple render instances with aerender using either a custom script or with plug-ins like RenderGarden. Our AE Render Node benchmark is designed to mimic the more popular plugins available for this, and allows the Xeon W-3200 processors to catch up with the X-series processors.

One thing that doesn't show up in the benchmark results is the fact that the Xeon W-3220 processors were slower than the X-series with only one or two render threads, but the performance gap got smaller and smaller as more threads were spawned. With higher core count CPUs, there is a certain point where you will no longer see a performance gain when you add more cores, resulting in a "soft cap" for performance. So, while these results are in many ways the complete opposite of the "standard" After Effects benchmark, the results actually make perfect sense when you factor in the fact that there is often a "soft" performance wall.

DaVinci Resolve is a very GPU-focused application, but there is still plenty of need for a powerful CPU. On the whole, the results are a bit mixed for these tests. For our 4K media test, the Intel Xeon W-3200 processors are right in line with the Intel X-series. The additional cores on the W-3265 24 Core even allow it to surpass the Core i9 9980XE by a small margin making it the fastest CPU we have tested to date.

However, the W-3265 in particular seems to hit a wall in our 8K test. We have no idea what happened (all these tests run at the same time so there is no chance we accidentally changed a BIOS setting or anything like that), but the W-3265 was almost exactly on par with the W-3245 in the 8K media test. The most likely cause is that we are simply GPU-limited in this test, and adding a second Titan RTX card would allow the W-3265 to really stretch its legs.

Fusion is another area where the Xeon W-3200 CPUs fare poorly. Fusion utilizes hardware in a very similar to After Effects, and it appears that there may currently be some issues with either single-threaded performance or thread scheduling with these Xeon W processors that results in poor performance in both After Effects and Fusion. 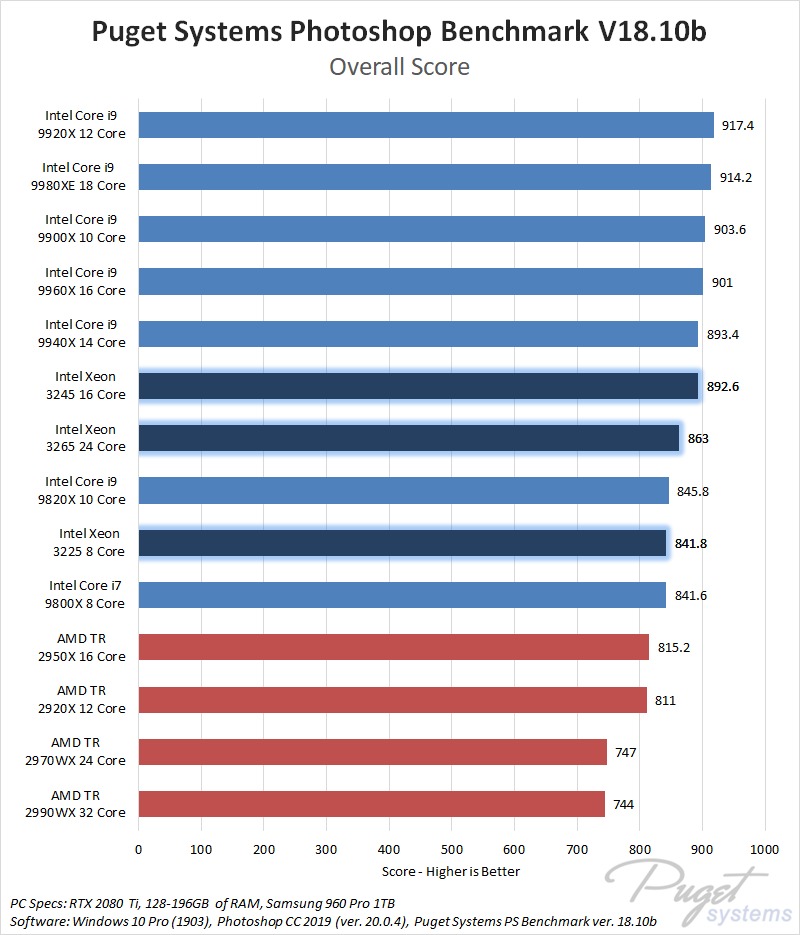 Photoshop may not be a true video editing application (unless you are one of the rare people that uses the video timeline features), but it is very commonly used alongside Premiere Pro, After Effects, and similar apps so we decided to throw it into the mix.

Photoshop doesn't scale particularly well with higher core counts, so really the performance isn't anything terrific with the Xeon W processors, but not all that bad either. The W-3265 is really the only one that performed a bit worse than you may expect, but since it runs at a lower frequency than the other models, it makes sense that it won't be great in a lightly threaded application like Photoshop.

Outside of a few odd performance results in After Effects and Fusion that we want to investigate further, the Intel Xeon W-3200 series processors performed largely on par with similarly specced Intel X-series CPUs. This is actually a bigger win for Intel than it may appear since previous Xeon W CPUs often had problems with applications that did not have terrific core scaling. This time around, however, the high Turbo Boost speeds on these new Xeon W-3200 series processors largely removes that concern.

From a price-to-performance standpoint, the Intel X-series processors are still going to be the winner in most cases, although you can often argue that the W-3245 and W-3265 keep up even with that metric. However, Intel's Xeon line has never been about getting the best performance for your dollar since you gain features like Registered ECC memory support and 64 PCI-E lanes in compensation for the higher price.

Overall, it is great to see that you shouldn't need to worry about giving up performance by going with a Xeon W-3200 processor over one of the more "budget-friendly" Intel X-series processors. Motion Graphics and VFX artists may want to hold off for a bit until we figure out what is going on with AE and Fusion, but for editors, the choice of which CPU product line to use is largely going to come down to whether the higher cost of the W-3200 series processors is worth the Xeon-exclusive features like Registered ECC memory support or 64 PCI-E lanes.