The single socket version of Intel third generation Xeon SP is out, the Ice Lake Xeon W 33xx. This is a much better platform with faster large capacity 8 channel memory and PCIe v4 with plenty of lanes. The CPU itself is nicely improved and has new features like Intel Deep Learning Boost (Intel® DL Boost) (which I haven't tested yet).

The new Intel platform is very much like the AMD Threadripper Pro platform (single socket version of EPYC Rome) so this is the obvious comparison to make.

I want to point out that I did my testing on Linux and everything worked as expected and achieved excellent results for numerical compute workloads I tested. This is in contrast to my colleagues who tested desktop applications on Windows. They had trouble that seemed to be related to process/thread scheduling and power management with Windows 10. Before finishing this post I did some quick testing with Python Numpy on Windows with the Xeon-W and didn't have any problems and got very good results under heavy load. This is just a warning that there could possibly be some unresolved issues when using Widows 10 right now.

The tests in the results below examine performance from 4 perspectives,

Along with new testing on Ice Lake Xeon-W (and Numpy on TR Pro) there are also relevant results in the charts from previous testing for comparison. These results are referenced from the posts AMD Threadripper Pro 3995x HPL HPCG NAMD Performance Testing (Preliminary) and Intel Rocket Lake Compute Performance Results HPL HPCG NAMD and Numpy

Software: (For the new results)

So how do the Intel Ice Lake Xeon-W and AMD Threadripper Pro compare? The charts below will hopefully help answer that.

…Make comparative judgments with caution! (some older results were run with slightly older libraries and software versions. However, differences to updates should be minimal for these tests and all results should be relevant for general comparison.) 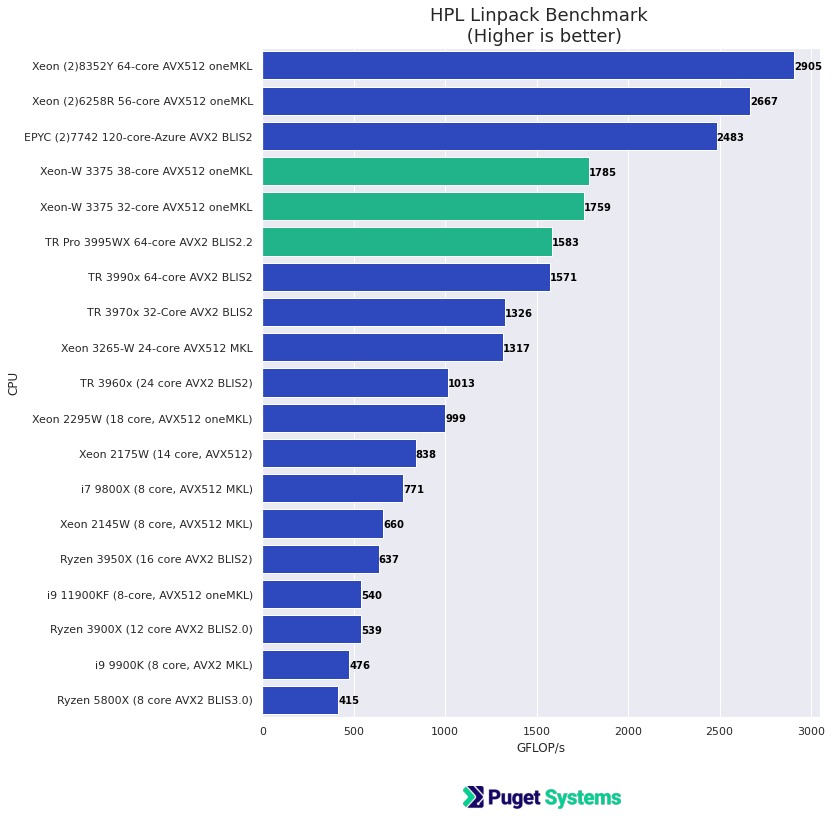 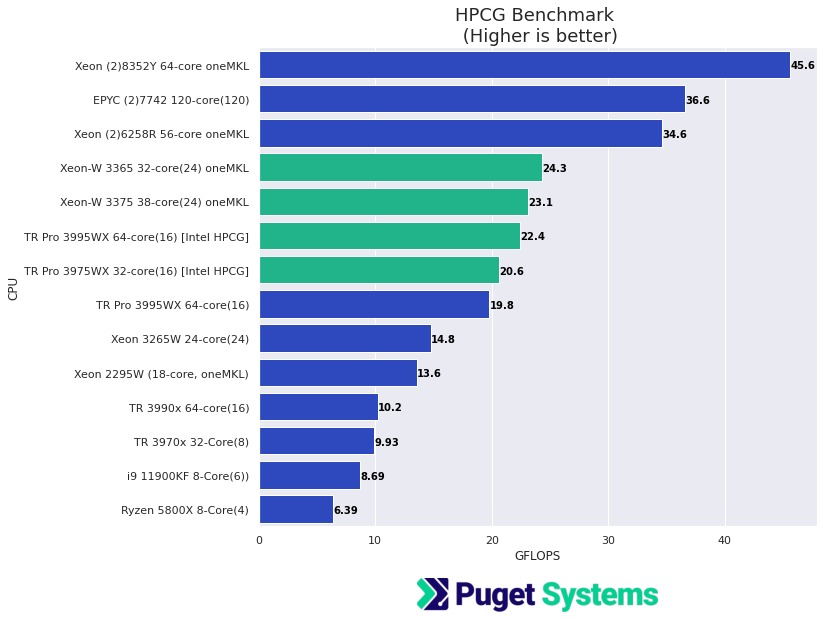 NAMD is a widely used Molecular Dynamics program with excellent parallel scalability, and low dependence on specially optimized hardware libraries (like MKL). It makes a very good "real-world" parallel performance benchmark for both CPU and GPU.

NAMD has very good GPU acceleration and in practice you would likely want to include GPUs in a system for this use. Version 2.x of NAMD requires good balance between CPU capability and GPUs. That generally means using a high core count CPU system with 1 or 2 NVIDIA GPUs. The upcoming version 3 should run "resident" on the GPU! I expect very good results with version 3 and I'm eager to test. 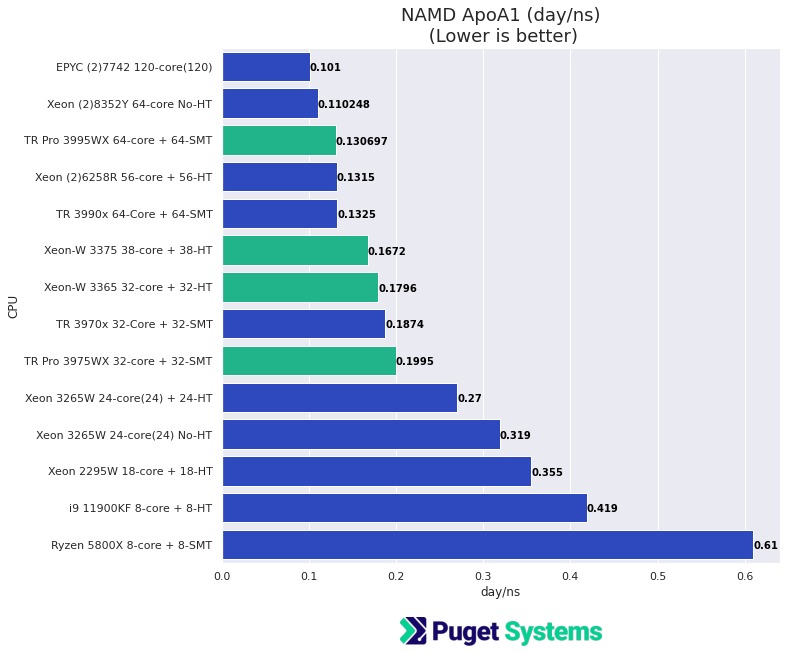 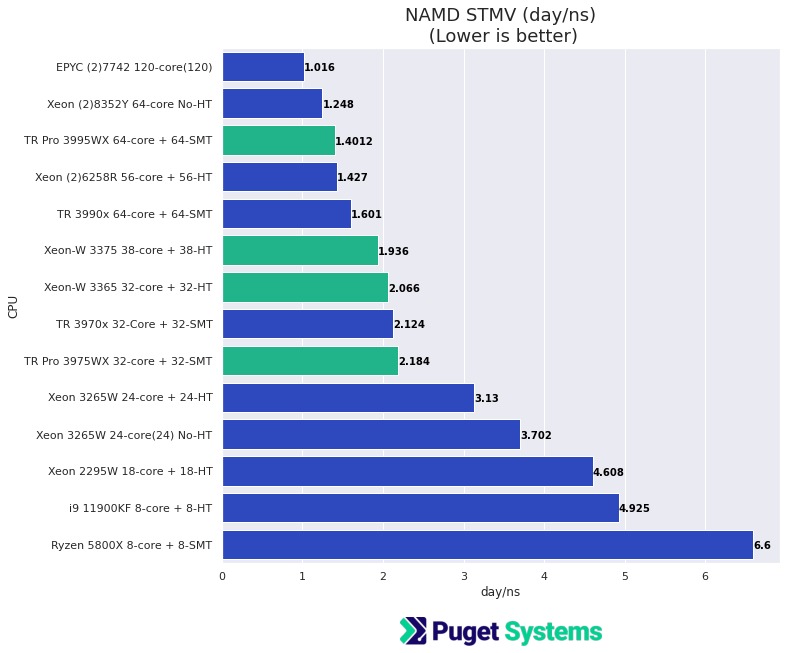 Python Numpy is central to much of the work being done in machine learning and scientific computing with Python. It is used internally by many packages and the API is being adopted/included as a standard interface for parts of ML frameworks like TensorFlow, PyTorch, JAX, and there are implementations like NVIDIA cupy that run with GPU acceleration including the frameworks mentioned earlier. (I will be doing comparative testing of Numpy API implementation soon.)

The underlying BLAS library linked with Numpy is important for performance. The data-science ML focused Anaconda Python distribution by default links its numpy build with Intel MKL. The default library link from the main conda-forge build is linked with OpenBLAS. OpenBLAS has provided good performance on AMD CPU's in the past. Recent releases of Intel MKL (oneMKL) now include a properly optimized code path for AMD CPU's (have a look at a post I wrote in November of 2019 for "how things used to be",

Take note of the version numbers in the table! Numpy 1.19 with MKL 2020.2 is used for TR Pro in the Anaconda build to show what performance was like with older MKL. The Intel build of numpy is essentially the same as the Anaconda build and you can see the effect of the more optimal code path for AMD with the new MKL.

Also, note that things have changed since I ran those jobs! Of course. The latest Anaconda and Conda-Forge Numpy builds are at version 21.1.

The Intel Ice Lake Xeon-W is great CPU. I already knew this from testing I did several months ago with the multi-socket Ice Lake Xeon-SP. For compute intensive workloads that are optimized for Intel this new Xeon-W is outstanding. Most of the testing in this post shows both the 32 and 38 core Ice Lake CPU's doing better than even the 64-core TR Pro. The testing I did in this post definitely favors Intel because with the exception of NAMD these tests had highly optimized builds for Intel.

If you are working with applications optimized for Intel (with MKL) then the new Ice Lake Xeon is an obvious choice. Intel's oneAPI developer tools are excellent so, overall, this Ice Lake Xeon platform and ecosystem is easy to recommend. However, if you are not working in the Intel ecosystem then the AMD TR Pro is also an outstanding CPU and platform! I wouldn't hesitate to recommend either of these.

I really like both of these platforms! They are very similar as far as the overall platform capability is concerned. If you are using Intel tools and Intel optimized applications then go with Intel. Otherwise it's a toss-up in my opinion. I think they are both great.