Cinema 4D, from Maxon, is widely used for creating advanced 3D graphics. When rendering those graphics, the performance of the central processor (CPU) in a computer is of paramount importance. CPU-based rendering generally scales well with both clock speed and core count, but those specifications cannot be directly compared across different brand or generations of processor. Here at Puget Systems we do real-world testing to ensure we provide our customers with the right computer for their needs. 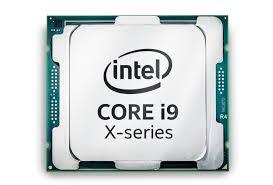 Intel has just released a trio of new Core X series processors, with higher core counts than anything they have offered in this line to date: the Core i9 7940X, 7960X, and 7980XE - with 14, 16, and 18 cores respectively. We ran these chips through Cinebench to see how they perform with rendering in Cinema 4D. We had recently put out an article on this same software that covered a wider range of processors, and at the time AMD's Threadripper CPUs were found to be the fastest single-CPU option. This time we will focus just on the Core X series in comparison to Threadripper, to see if the new models can take the performance title back for Intel. For reference we will also include a dual Xeon setup, to show how these single chip options compare to a dual CPU configuration.

To see how these new CPUs perform in Cinema 4D, we ran Cinebench R15 on the following configurations:

The main focus here is on the three new Core X (formerly code named Skylake X) processors, and specifically how they compare to AMD's Threadripper models. In our last round of testing we found that the 16-core 1950X took the lead in single-CPU performance with Cinema 4D, as well as many other CPU-based rendering engines. Here is some background on how we will test and what to look for in the charts that follow.

The results presented below are from Cinebench R15, which is a free benchmark released by Maxon. It is designed to test CPU and GPU performance within Cinema 4D without requiring a full installation of that software. Since the focus of this article is on CPU performance we only ran the CPU portion of Cinebench, which gives two results. The first is single-core performance and is a decent indicator of how well a processor will do with purely single-threaded applications. The second result is for multi-core performance, which is what actually interests us for this article. This is a perfect example of what to expect with rendering and other heavily-threaded applications, which is where these high core count CPUs should shine. As such, this is the only result we are looking at today.

Here are the multi-core results for the various CPUs we tested in Cinebench R15. The new Core i9 processors are shown in light blue: 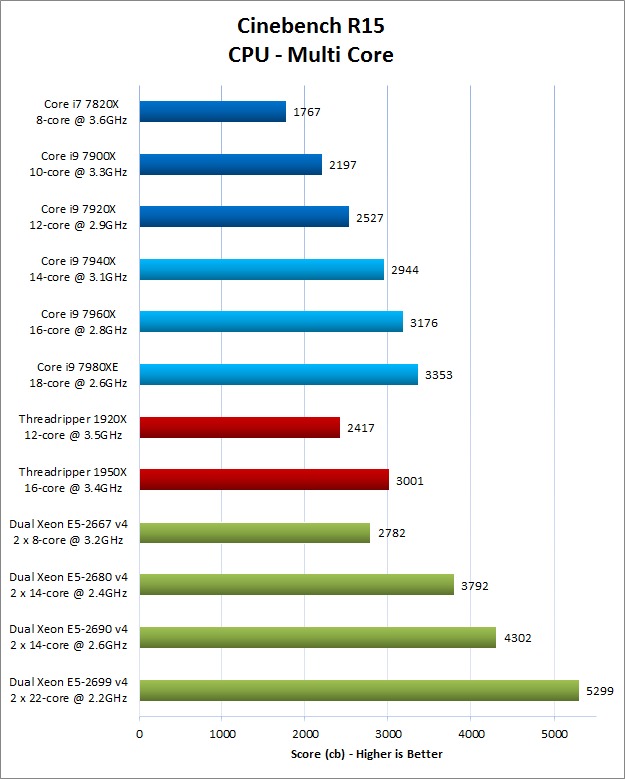 You can really see the impact of the varying core count between these processors. The upper-end dual Xeons, with a total of 28-44 total cores, definitely win out - but those are also much more expensive systems. Among the single CPU workstations, Intel's new 16- and 18-core CPUs take the lead over AMD's Threadripper... but even those come at a higher price.

It is also worth noting that AMD and Intel both have server-class processors with even more cores as well: up to 32 on AMD's EPYC and up to 28 from Intel's latest Xeon Platinum line. With their focus on the multi-CPU server segment those may not come into play for Cinema 4D, but if a manufacturer puts out a single-socket workstation motherboard that is compatible with either of those platforms then they may be worth a look.

As shown above, the tables have turned since our last Cinema 4D performance article. Intel took back the lead, but their new Core X processors are also substantially more expensive than AMD's Threadripper. If you want the absolute fastest single-CPU rendering speeds then go for the i9 7980XE - but if you want the best value, the 1950X has very strong performance while costing $1000 less.