V-Ray Next, from Chaos Group, is made up of a pair of rendering engines: one that uses the CPU (processor) and another which focuses on GPUs (video cards). One of the big advantages of that type of GPU-based rendering is that you can easily put multiple video cards inside a single workstation. How much benefit does each additional card provide for V-Ray Next, though? We put four GeForce RTX 2080 Ti video cards to the test to find out!

To see how increasing the number of video cards in a system affects performance in V-Ray Next GPU, we ran the free benchmark that Chaos Group provides on their website. For hardware, we kitted out a single workstation with four NVIDIA GeForce RTX 2080 Ti video cards - variants with blower-style fans, to ensure that the cooling layout wasn't going to be a problem. Here are the full system specs:

In the past we have observed that V-Ray performs differently when run on the primary video card - the one handling display output in Windows - versus a secondary card with no monitor attached. To account for that we tested one, two, and three GPUs with the primary included as well as secondary cards only. For four GPUs we had no choice but to include the primary card in the test. The benchmark was run multiple times on each combination of video cards, and the best result for each combination was used in the charts below.

Without further ado, here are the results. We color-coded the graph as well: when the primary video card (with the monitor connected) was included, we used light green - and when only secondary cards were used, a darker shade of green was selected instead. 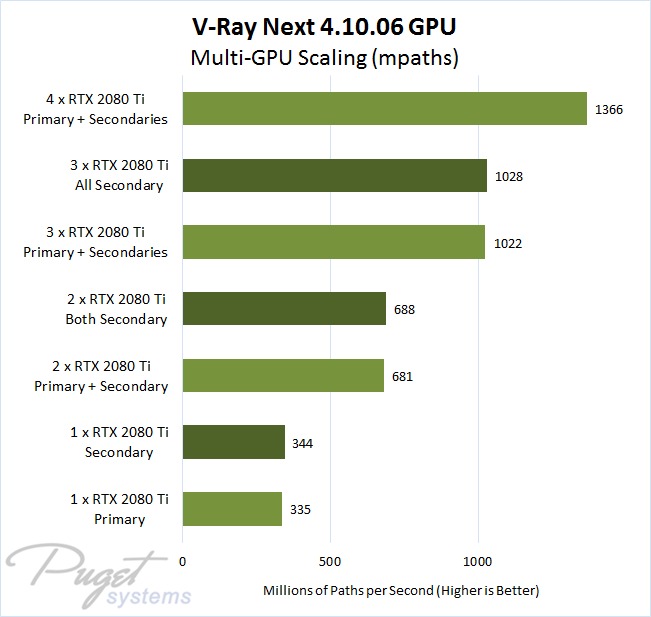 And here are the same data points, but shown as relative performance to a single RTX 2080 Ti running as the primary video card: 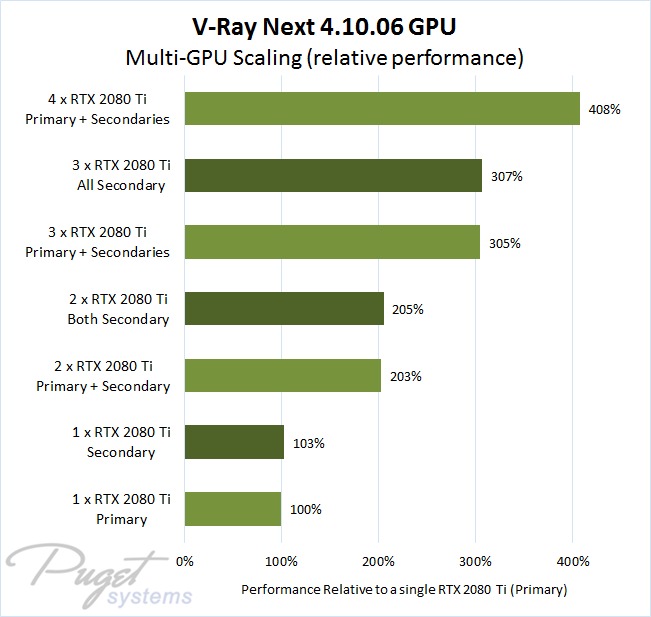 There are two main things I see as take-aways from these results:

Performance in V-Ray Next scales very well across multiple GPUs - but that statement could potentially lead to incorrect conclusions. Doubling the number of video cards in a system effectively doubles rendering performance, but does *not* double the price of the computer. Much of a workstation can stay the same, even as more video cards are added, so you can end up with a bigger percentage increase in performance than the percentage increase in overall system price!

In addition, V-Ray Next GPU can also make some use of the CPU in your system by emulating CUDA on it in software. That isn't as big of a boost as adding another real video card, but with higher-end processors it can certainly add a noticeable amount of performance.

Combining this information with our data on what video cards perform the best in V-Ray will enable you to make the right decisions when it comes to selecting your next rendering workstation. And if you are in the market for one, we would be happy to build it for you!