Skip to content
Always look at the date when you read an article. Some of the content in this article is most likely out of date, as it was written on October 12, 2018. For newer information, see our more recent articles.

We found previously that stacking multiple RTX 2080 video cards next to each other for multi-GPU rendering led to overheating and significant performance throttling, due to the dual-fan cooler NVIDIA has adopted as the standard on this generation of Founders Edition cards. Now that manufacturers like ASUS are putting out single-fan, blower-style cards we can repeat our testing to see if the throttling issues are resolved and find out how well these video cards scale when using 1, 2, 3, or even 4 of them for rendering in OctaneRender and Redshift. 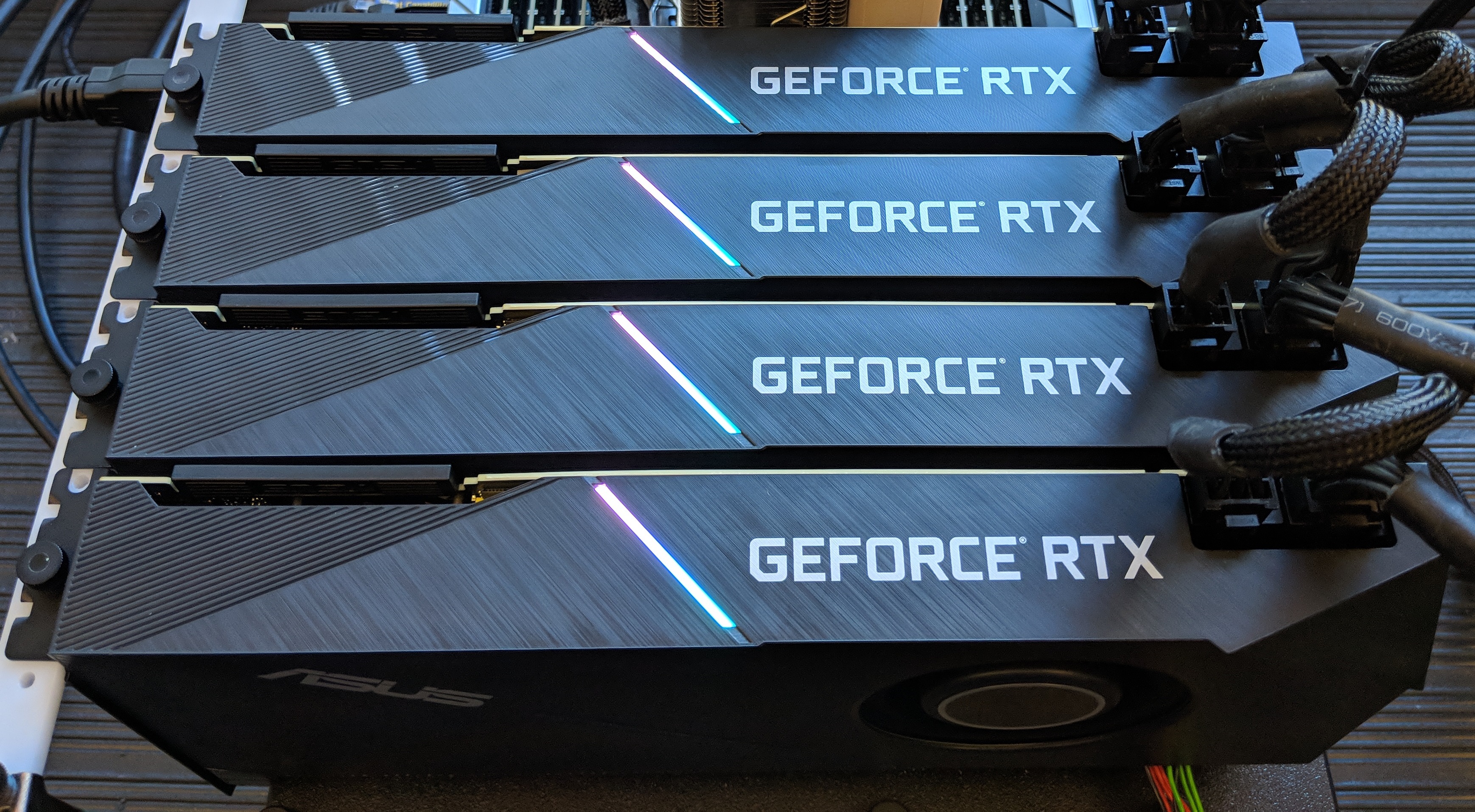 When benchmarking we often run each test three times, make sure the results are pretty close, and then take the best one (highest score or lowest time, depending on the situation) as the final result. This helps ensure that something going on in the background doesn't throw things off and that each hardware configuration we test gets a fair shake. Because of our previous experience with the NVIDIA Founders Edition RTX 2080s throttling, though, we wanted to conduct longer tests – so we ran each combination of video cards and software for 30+ minutes straight, collecting far more data points and ensuring that we would see throttling if it was going to happen.

To keep the testing fair, and to be able to compare performance directly to our previous test, we used the same motherboard, CPU, and power supply. If you would like full details on the hardware configuration we ran these tests on, just click here to expand a detailed list.

The first question we wanted to answer is whether these single-fan, blower-style cards would throttle like the NVIDIA Founders Edition models did – so the first thing we tried was a full set of four GPUs. Running both OctaneRender and Redshift for over 30 minutes each, we looked at the difference between the highest and lowest results – and found there was only 1.4% variance in OctaneRender and 1.6% variance in Redshift. That is well within the margin of error when looking at this many test runs, and since we saw huge performance dips after just the second run with these programs before it is clear that the blower-style cooling solution fixes the overheating and throttling issues we had with the dual-fan Founders Edition cards.

With that question out of the way, we continued to run sets of three, two, and finally just one of these cards to see how well they scale. Here are charts showing those results for OctaneRender – both absolute scores as well as percent increase compared to a single card: 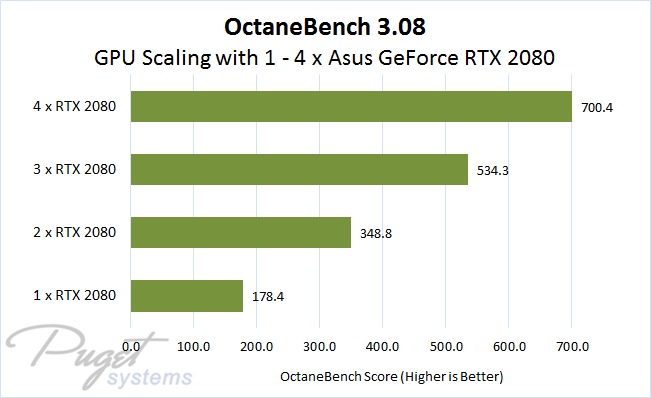 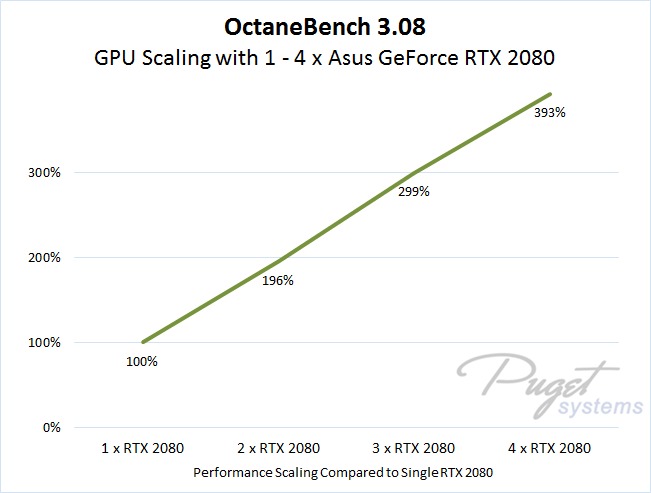 That looks great – near perfect scaling, with just some minor variance… exactly what we have come to expect from OctaneRender. Moving on, we have the same sort of result charts for Redshift as well: 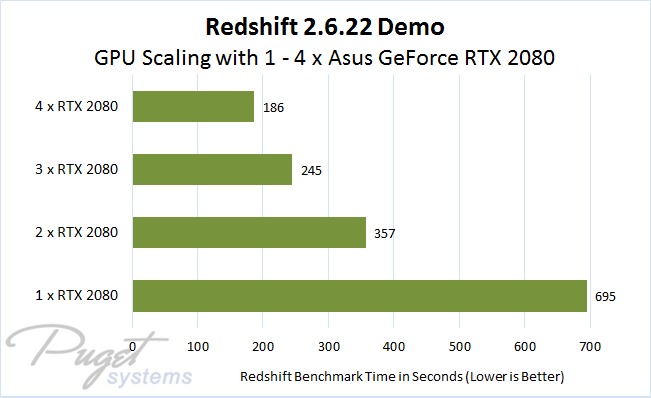 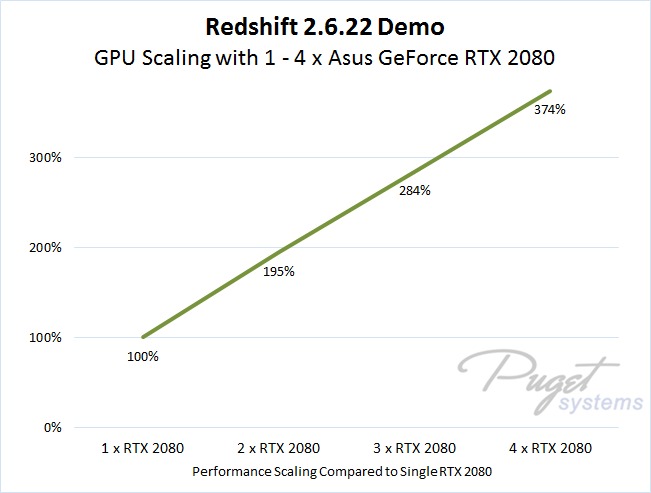 Here, again, we see excellent results. Redshift has always shown a little more drop-off in performance when we've tested it with multiple GPUs, compared to Octane, but it still benefits greatly from having more than one video card to utilize. Because these blower-style cards are not throttling significantly under heavy load, there is no artificial penalty from using a full set of four cards to maximize performance.

There are some additional things to consider when looking at different video cards built with the same GPU. To illustrate some of those issues with these two particular GeForce RTX 2080 models…

Single Card Performance vs Multi Card Performance – If you look at just a single card of each type, the NVIDIA Founders Edition models are clocked slightly higher than the reference-speed ASUS Turbo cards. The specs NVIDIA lists on their website show a 5% clock speed difference (1800 vs 1710 MHz), and that matches almost exactly what we found when comparing single GPU performance:

However, when we ramp up to a full set of four graphics cards, the multi-GPU friendly cooler on the ASUS Turbo model maintains better performance than the dual-fan NVIDIA Founders Edition card – even though the NVIDIA version starts off with higher clock speeds:

Noise Levels – As individual cards, dual-fan models like the NVIDIA Founders Edition RTX 2080 will usually run quieter under load than a single-fan blower card. However, when the cards are stacked next to each other in a three or four GPU configuration, those dual fan designs have to ramp fan speeds higher to try and keep cool. I didn't have the equipment to measure noise levels, but the set of four Founders Edition cards sounded much louder to my ears under load than the ASUS Turbo models. Both sets of cards did ramp their fans up higher when crowded together than when used as single cards, though, which makes sense since airflow is more restricted and there is more heat surrounding the cards in that situation.

Which Type of GeForce RTX Card Should You Get for Multi-GPU Rendering?

If you just want a single video card, the NVIDIA Founders Edition GeForce RTX 2080 and 2080 Ti are great choices – and there are other brands that make similar dual-fan models. If you want to use multiple GPUs, however, single-fan cards that exhaust heat out of the system like the ASUS Turbo RTX 2080 are much better.

How Well Do GeForce RTX 2080 Cards Scale in OctaneRender and Redshift?

Assuming you use video cards with coolers that can keep them running well in multi-GPU configurations, the GeForce RTX video cards have excellent performance scaling in both OctaneRender and Redshift. GPU-based rendering has always benefited from multiple cards, in our experience, and the RTX series is no exception… but make sure your system's cooling is up to the task. 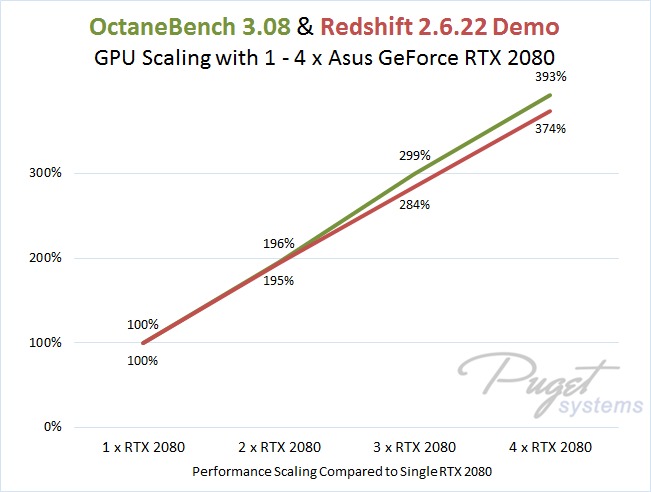