Skip to content
Always look at the date when you read an article. Some of the content in this article is most likely out of date, as it was written on September 6, 2017. For newer information, see our more recent articles.

FurryBall RT, from Art And Animation Studio, is an extremely fast rendering system, using the processing power of GPUs instead of CPUs. This is a relatively new approach, as traditional graphics rendering was done on CPUs instead. Graphics processing units (GPUs / video cards) are ideal for highly parallely tasks like rendering, though, and it is easier to fit multiple GPUs in a single computer than multiple CPUs.

However, care does have to be taken when putting more than one video card into a workstation: there needs to be space in the chassis, the right type of PCI-Express slots in the correct layout on the motherboard, a large enough power supply, and plenty of cooling. In this article we are going to look at several platforms – motherboard chipsets along with a matching CPU – to see how well they handle multi-GPU performance scaling in the FurryBall benchmark. 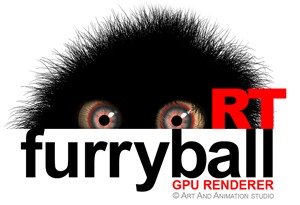 To see how the different platforms scale in FurryBall, we used the following configurations:

These test configurations cover six major CPU platforms that are currently available, four from Intel and two from AMD. With the tested motherboards they support either 2, 3, or 4 GPUs at maximum – with a mix of x8 and x16 PCI-Express lanes per card, depending on the board and card layout. In our past testing with GPU rendering we found that running cards at x8 vs x16 made no substantial difference.

To determine performance, we ran the benchmark function within the FurryBall RT standalone application. The results include three scores for different portions of the rendering process (Ambient Occlusion, Direct, and Indirect) as well as ratios comparing the results to a GeForce Titan X reference card. We opted to use the numeric results for straight-forward comparison, rather than trying to use the ratios to a Titan X. This information is split up into three charts below, separated within each chart by platform and the number of GPUs – which are color coded for easy cross-platform comparisons.

Here are the scores for each section of the FurryBall RT benchmark. Ambient Occlusion (AO) is up first: 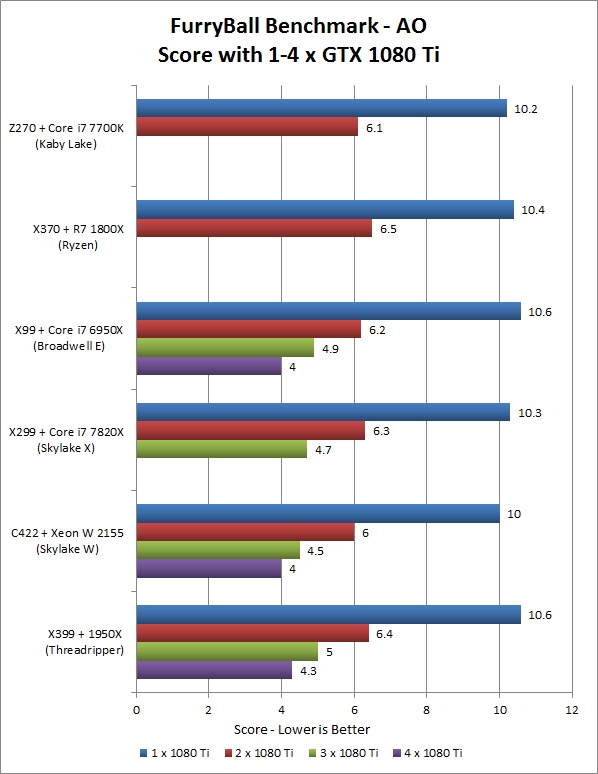 All the results are very close here, with the Intel systems coming in just a hair faster than AMD – but not by much. Scores for the Direct section of the benchmark are next: 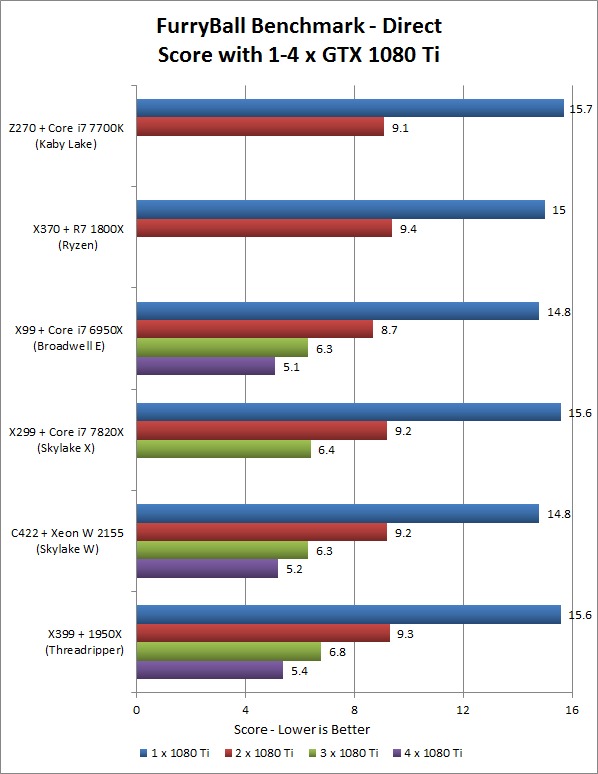 Everything is still extremely close here, with Intel's X99 and C422 appearing to lead slightly. The last set of results are from the Indirect test phase: 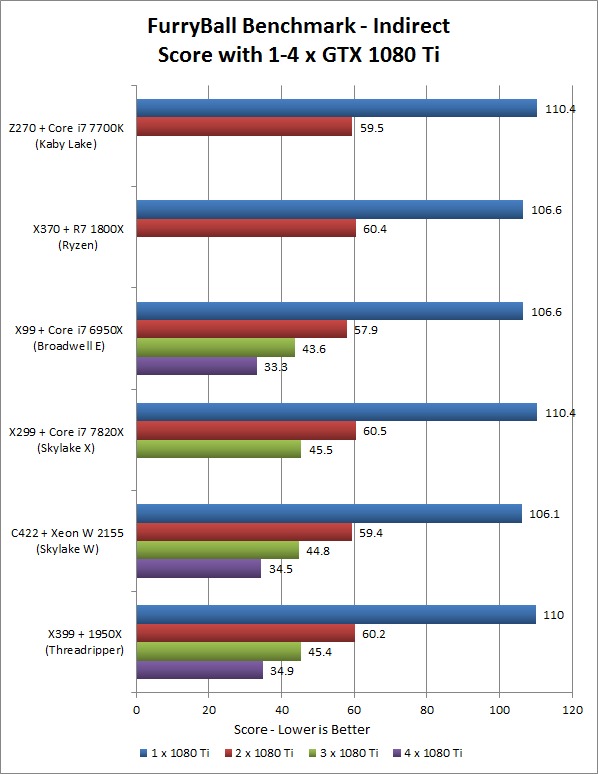 This last set of results still shows all the platforms coming out very close in speeds, with the venerable X99 platform edging out the others when using more than one GPU. It has been around far longer than the other chipsets we tested, though, so that may be subtle optimizations to the architecture over the years… or it could just as easily be randomness within the margin of error.

The main takeaway here is that the platform does not make any substantial impact on performance. There is a small amount of variance, with less than a 10% spread, but that is not much in the grand scheme of things. Any of these platforms will do well with multi-GPU rendering in FurryBall, though keep in mind that the chipset and motherboard will determine the total number of video cards you can use.

Based on our test results, the platform itself isn't a huge concern for FurryBall RT. All of the configurations we tested perform very similarly, though the number of video cards supported does vary by chipset and motherboard.

What matters more is your budget and how many GPUs you want to use. If you are just going for one or two GPUs, even Intel's mainstream Z270 chipset will work – though with a higher-end platform you get support for higher core count processors and more RAM. For three or four GPUs, you need a configuration with enough PCI-Express slots and lanes to support all of the cards. That limits the options somewhat, but both AMD's X399 / Threadripper and Intel's C422 / Xeon W are quite strong in that regard. A case could be made that the aging X99 platform does the best overall, and it has a solid track record of dependability, but it is also nearing the end of its life.

As of this writing, no X299 motherboards are available yet which support more than three GPUs – but when they do come we will test them and publish updated results. If there are other platforms you would like to see tested, let us know in the comments!