AMD's new Threadripper 3990X 64 Core processor is a very impressive product, but there are very few applications (even in video editing) that are capable of taking advantage of all these cores. The positive side is that even though the 3990X has an insane number of cores, it also maintains a very respectable 4.3GHz maximum Turbo Boost frequency. This means that even if it does not result in stellar performance in any given application, it shouldn't be particularly bad either.

While we have tested the Threadripper 3990X in Photoshop, After Effects, and many other applications, most of them are lightly threaded so we never expected the 3990X to put up record numbers. Premiere Pro, on the other hand, is one of the few applications from Adobe that can take advantage of higher core count CPUs. Having 64 cores on a single CPU is something completely new to the workstation market, however, so there is no real way to know whether or not Premiere Pro will be able to effectively utilize all of these cores without running benchmarks to find out. 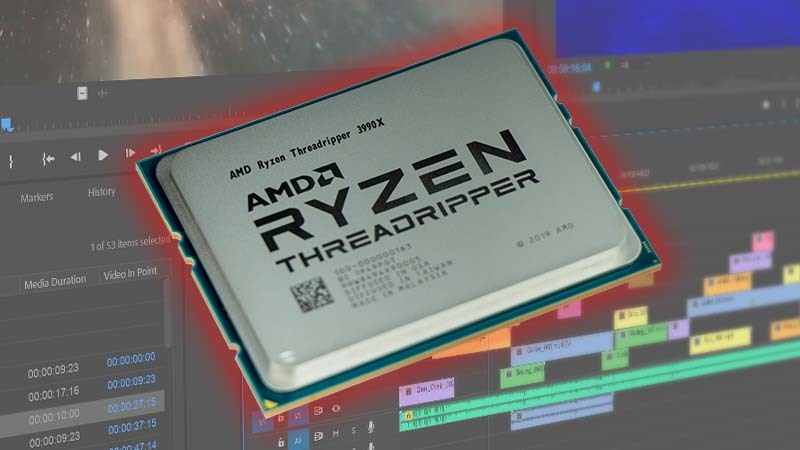 In this article, we will be examining the performance of the AMD Threadripper 3990X 64 Core CPU in Premiere Pro as compared to the latest AMD Threadripper, AMD Ryzen, Intel X-series, and Intel 9th Gen processors. If you are interested in how this CPU performs in other applications, we also have several other articles for Photoshop, Lightroom Classic, After Effects, DaVinci Resolve, and more available on our article listing page.

Feel free to skip to the next sections for our analysis of these results to get a wider view of how each CPU performs in Premiere Pro. 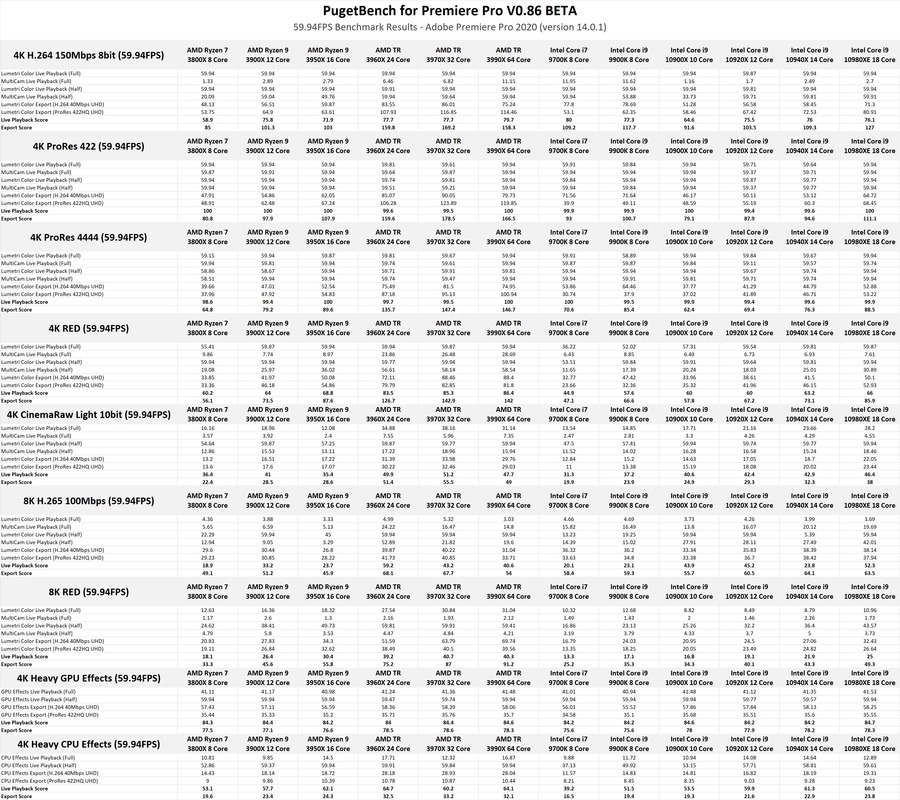 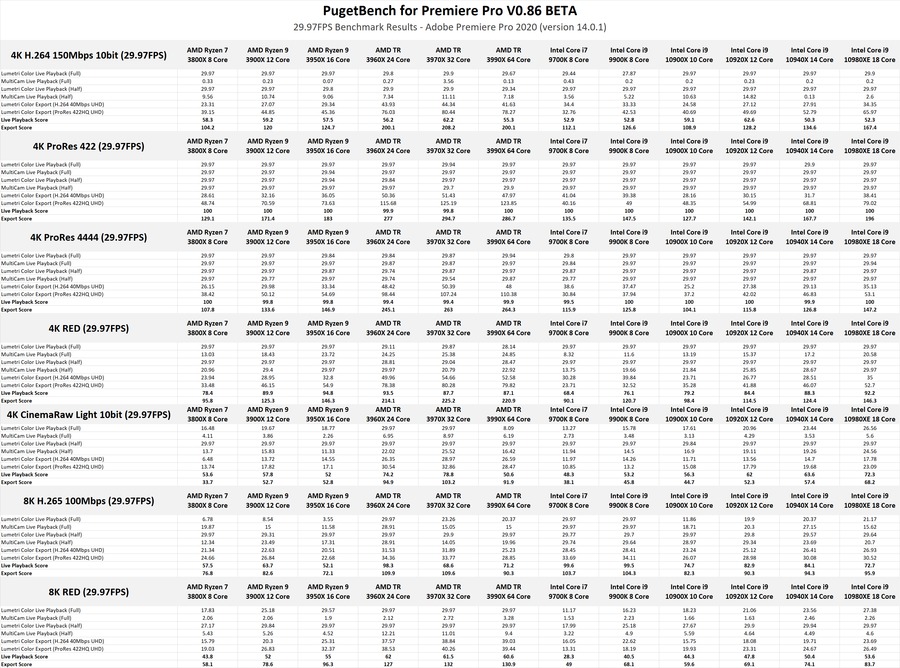 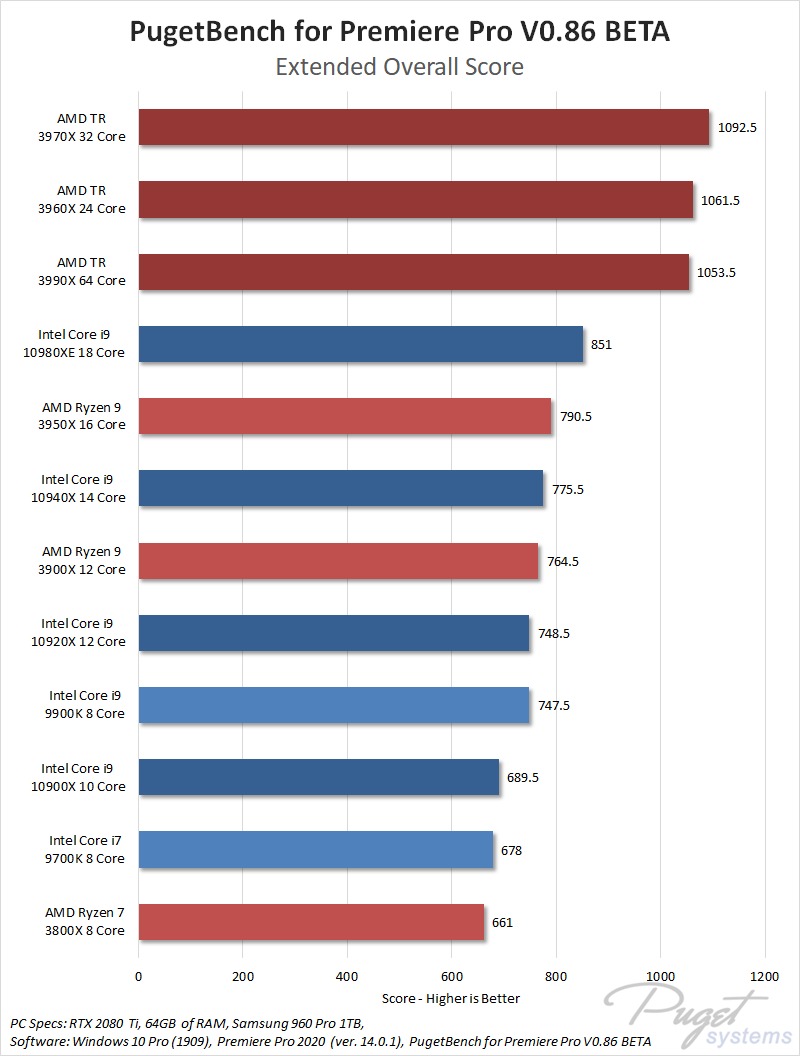 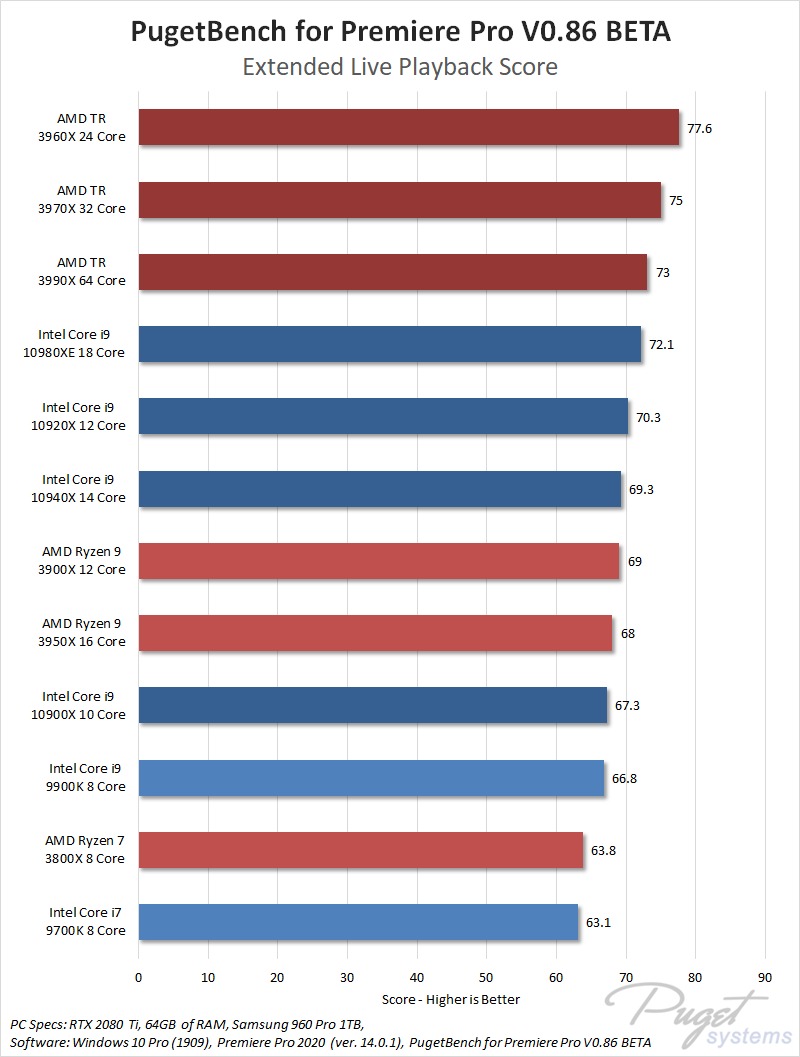 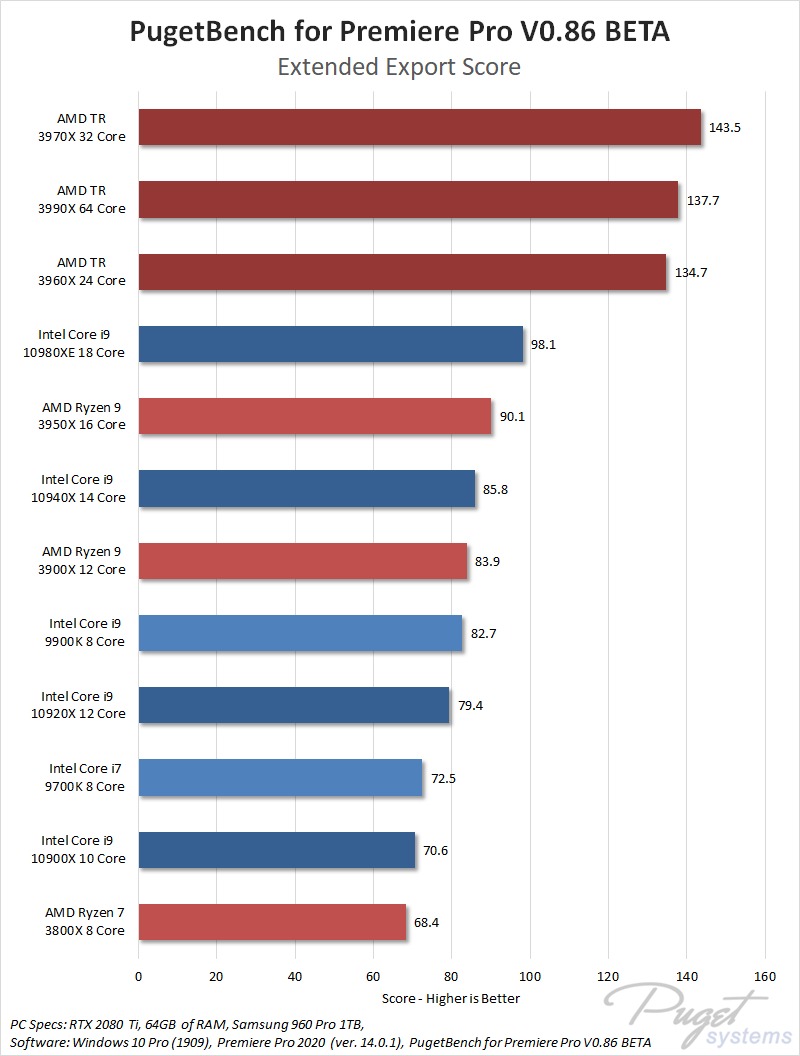 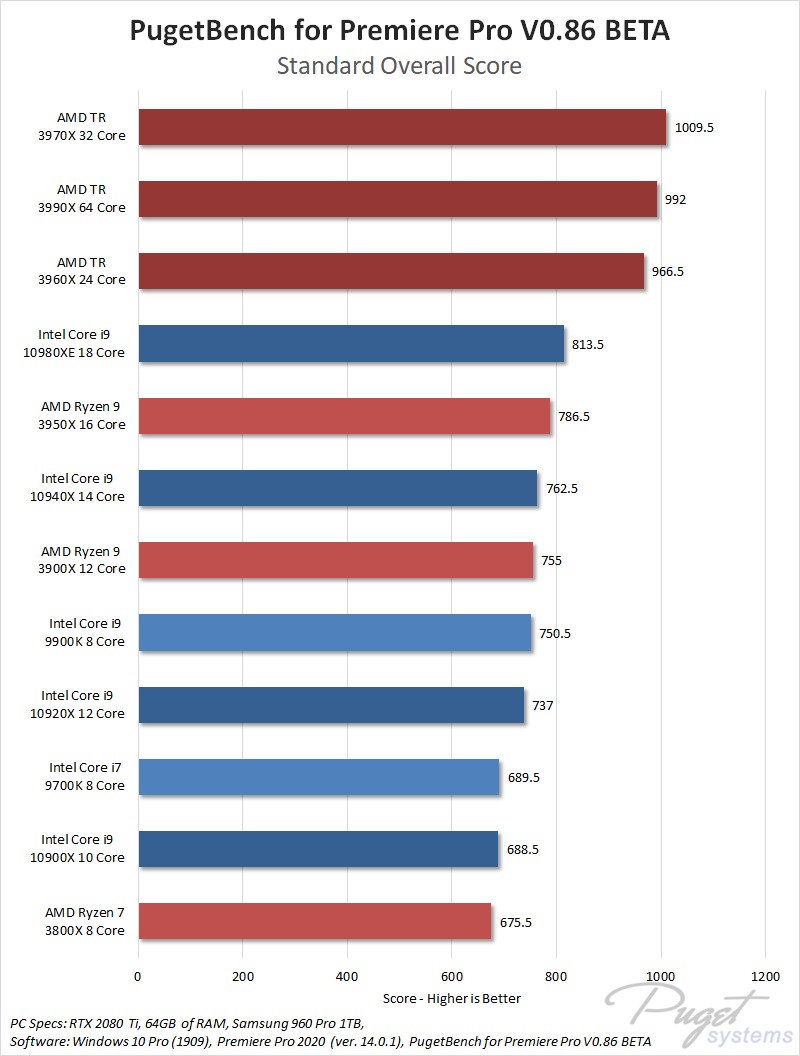 Getting into the details a bit more, live playback performance tends to be the #1 concern for most of our Premiere Pro customers. Here, the 3990X does OK (and does slightly beat any Intel-based CPU), but it is about 6% slower than the Threadripper 3960X 24 Core. This isn't enough of a difference that you will likely notice it in your day-to-day work, but that does make the 3990X almost 3x the cost for slightly worse performance.

Moving on to exporting, this is where AMD's Threadripper line really excels. Even here, however, the Threadripper 3990X only manages to take second place, coming in at about 4% slower than the Threadripper 3970X 32 Core. It is also only a few percent faster than the Threadripper 3960X 24 Core, so in most cases either the 3970X or 3960X is likely a better option since the much lower price of those CPUs allows you to allocate more of your budget towards more RAM, faster storage, or other upgrades that should make a more significant performance impact overall.

One thing we do not currently test that the 3990X should be great at is rendering multiple videos at once. Premiere Pro does not have this functionality natively, and even in Media Encoder you can only render to multiple files from a single source. But if you use software that can bulk transcode media in parallel, that may be an idea use-case for the 3990X.

Is the AMD Threadripper 3990X good for Premiere Pro?

While there may be some niche uses for the AMD Threadripper 3990X 64 Core within the greater video editing industry, the 3990X is underwhelming for Premiere Pro. It is certainly no slouch, but only performs roughly on par with the Threadripper 3960X 24 Core for both live playback and exporting.

Price aside, the 3990X does perform fairly well in Premiere Pro – just no better than a CPU that is 1/3 the price. If your workflow involves other applications that are able to utilize all of these cores, you at least won't be giving up much performance in Premiere Pro by using the 3990X. Unless you know for certain that the 3990X will be worth its hefty price tag, however, you may get more overall value by investing that money into more RAM, faster storage, a second dedicated workstation, or a trip to Hawaii to recharge yourself.

Keep in mind that the benchmark results in this article are strictly for Premiere Pro and that performance will vary widely in different applications. If your workflow includes other software packages (we have similar articles for Photoshop, Lightroom Classic, After Effects, DaVinci Resolve, and many others), you need to consider how the processor will perform in all those applications. Be sure to check our list of Hardware Articles to keep up to date on how all of these software packages perform with the latest CPUs.