Like most applications from Adobe, Premiere Pro CC utilizes the GPU to enhance performance for a growing number of effects such as Lumetri Color, Cross Dissolve, Gaussian Blur, Ultra Key, and Sharpen. However, while a faster GPU will technically make these effects render faster, whether you would notice it in the real-world depends on how difficult that effect is to process and how many of these effects you stack on top of each other. For example, if you only use Lumteri Color, the performance gain will likely be minimal since the time it takes for your system to process that effect is minimal relative to everything else. In most situations, the more effects you use, the greater the benefit you will see from a more powerful GPU. 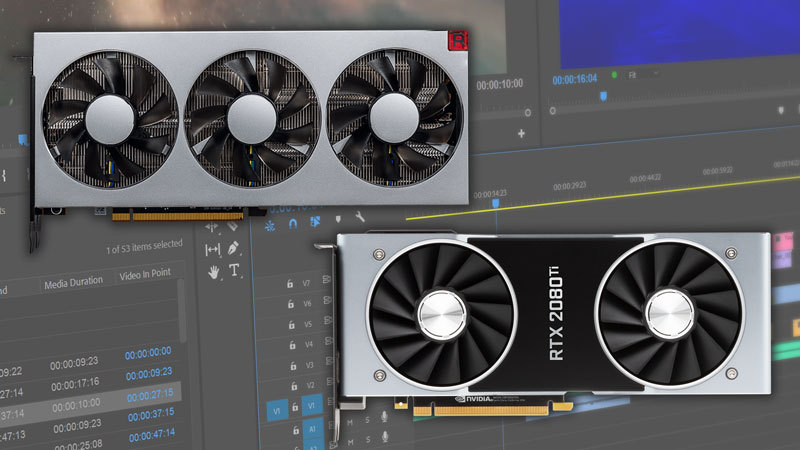 In this article, we will be looking at the full range of NVIDIA GeForce RTX cards (as well as the new GTX 1660 Ti) and compare them to the AMD Radeon Vega 64 and Radeon VII. We recently did this comparison for a number of other applications, and while the AMD cards didn't fare well in Adobe Photoshop and After Effects, the Radeon VII in particular did extremely well in DaVinci Resolve. The question is: will NVIDIA come out on top like have in other Adobe apps, or will Premiere Pro behave more like DaVinci Resolve with AMD taking the price-to-performance crown?

The benchmark we will be using is an alpha version of what we plan to make available to the public in the coming months. Our testing looks at both live playback and export performance with a wide range of codecs at 4K and 8K resolutions as well as at 29.97 and 59.94 FPS. In addition, there are dedicated "Heavy GPU Effects" and "Heavy CPU Effects" sequences that are designed to individually stress the GPU and CPU beyond what a typical Premiere Pro user will do.

Linus Media Group (who produces the popular Linus Tech Tips and TechLinked channels on Youtube) for the 4K and 8K RED clips which were also transcoded to create the H.264, H.265, and ProRes clips.

For most of our testing, we looked at live playback performance at Full and Half playback resolution as well as exporting using the "Youtube 2160p 4K Ultra HD" preset (H.264, 4K, 40mbps) as well as 4K ProRes 422HQ 8-bpc. For each type of test media, we used two test sequences:

In addition, we have a "Heavy GPU Effects" sequence using:

While our benchmark presents various scores based on the performance of each test, we also wanted to provide the individual results. If there is a specific codec you work with that we are testing, examining the raw results and scores for that individual codec is going to be much more applicable to your workflow than our Overall and Average scores. Feel free to skip to the next section for our analysis of these results if you rather get a wider view of how each GPU performs.

Our results are divided into an Overall Score, Average Live Playback Score, Average Export Score, and Heavy GPU Effects Score (which is the average live playback and export scores from the 29.97 and 59.94 FPS Heavy GPU Effects sequences). One thing we want to note is that our Heavy GPU Effects test is designed to put a heavier load on the GPU than most Premiere Pro users ever will. In many ways, this makes this an unrealistic benchmark, but it is an indication of the largest possible benefit you could see with a higher-end GPU.

If we look at the Overall Score, the performance differences aren't as drastic since most Premiere Pro projects are going to be limited more by the performance of the CPU than the GPU. Still, the Radeon Vega 64 is again at the very bottom, with the Radeon VII and GTX 1660 Ti tying for second-to-last place. Compared to the Radeon VII, the RTX 2070 and 2080 end up being about 8% faster overall with most of that coming from their better live playback performance.

In short, at a price-point similar to the Radeon VII, you are looking at anywhere from a 8% to 35% performance gain with NVIDIA GeForce over AMD Radeon depending on how many GPU effects you use. If your budget allows for a higher-end GPU like the RTX 2080 Ti, however, then there is a 12% to 63% performance gain (again, depending on the amount of GPU effects) with NVIDIA GeForce over AMD Radeon.

Outside of straight performance, the Radeon VII does have 16GB of VRAM which can be useful in some situations. However, for Premiere Pro it is unusual to need more than 8-10GB of VRAM even for 8K workflows. Having more VRAM than you need doesn't give you any better performance, so unless you are using a plug-in or other application that actually needs 16GB of VRAM, the Radeon VII is simply a worse choice for Premiere Pro than an NVIDIA GeForce RTX 2070 or 2080.

Keep in mind that article is only looking at Premiere Pro - if your workflow includes multiple software packages, it is a good idea to get a feel for how these cards compare in those other applications as well. For example, in DaVinci Resolve the Radeon VII is terrific. Not only does it perform on par with the RTX 2080 Ti, the 16GB of VRAM is incredibly useful if you do a significant amount of noise reduction. On the other hand, AMD tends to trail behind NVIDIA in other Adobe apps like After Effects and Photoshop.

In terms of just Premiere Pro, however, using an NVIDIA GeForce GPU is definitely a better choice than using an AMD Radeon Vega or Radeon VII.