Skip to content
Always look at the date when you read an article. Some of the content in this article is most likely out of date, as it was written on June 19, 2018. For newer information, see our more recent articles.

When we first started to run tests for a short series of articles on Redshift, the version available was 2.5.72. However, mid-way through our testing, a new version was released: 2.6.11. This was exciting because it brought support for NVIDIA's latest GPU architecture, Volta, making the Titan V a viable option for Redshift. But it also begged the question: has rendering speed been improved as well?

To see if there has been any performance improvement from Redshift 2.5.72 to 2.6.11, we ran the benchmark included in both demo versions of Redshift with 1, 2, 3, and 4 NVIDIA GeForce GTX 1080 Ti video cards. This benchmark uses all available GPUs to render a single, still image – and measures how long the whole process takes. Comparing those times will show if render speeds have changed.

For our testbed, we wanted to use a high clock speed processor so that the differing Redshift versions could really shine. We also needed a platform that would support as many video cards as possible in a large tower workstation. Given that combination of goals, the configuration which made the most sense was Intel's Xeon W – specifically, the W-2125 processor on a Gigabyte MW51-HP0 board. That provided the right PCI-Express slot layout for up to four GPUs, and the Xeon W-2125 runs fast: 4.0GHz base and up to 4.5GHz turbo.

Here are line graphs showing the Redshift benchmark render times with 1, 2, 3, and 4 of the GeForce GTX 1080 Ti 11GB graphics card: 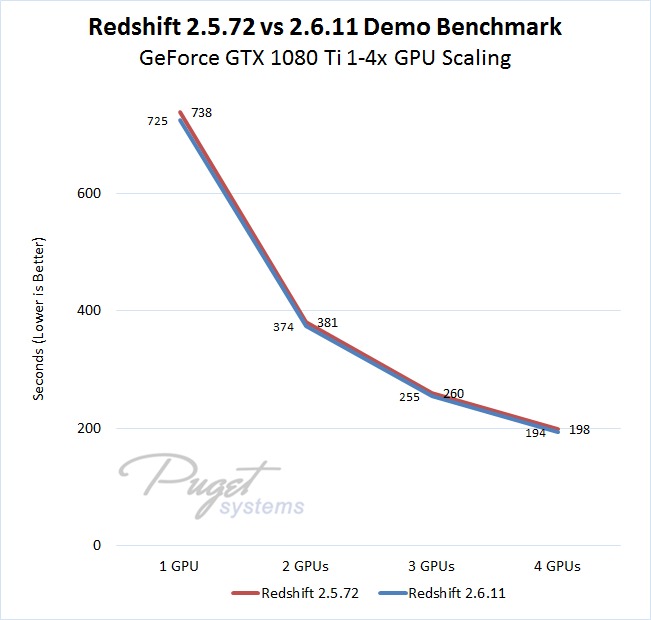 To better see the difference shown above, here is a chart showing the number of seconds saved in 2.6.11 compared to 2.5.72: 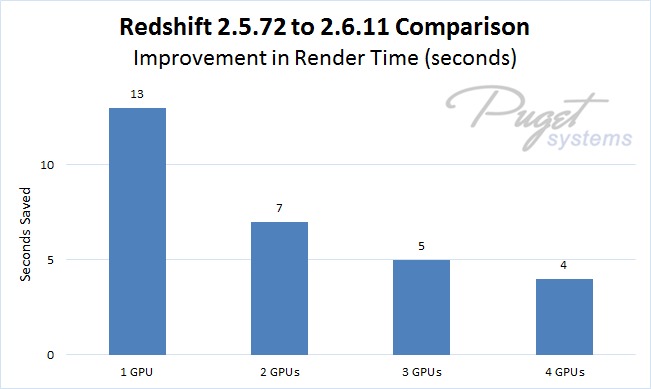 Or to show it as a percentage increase instead of raw time: 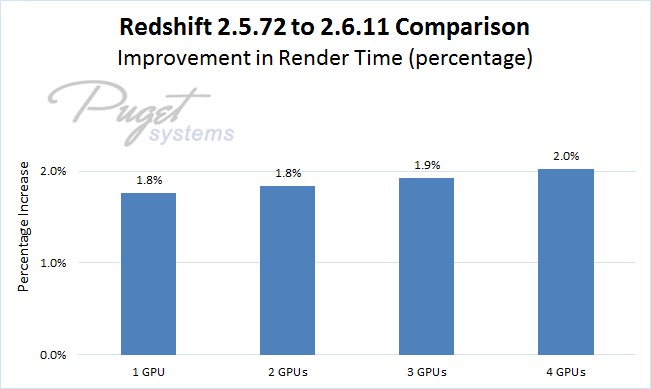 The first graph above shows that there is a clear, though small, difference in performance between Redshift 2.6.11 and the older 2.5.72. It can be a little confusing to view in terms of just time, though, so the presentation of the improvement as a percentage in that last graph is helpful. As seen there, render times have improved by approximately 1.8 to 2% in the latest version of Redshift. Nothing earth-shattering, but not bad either.

In addition to opening up Redshift to Volta-based GPUs, like the Titan V, version 2.6.11 has also brought with it a small increase in render speeds across the board. Whether you want to try a Titan V or prefer to stick with less costly video cards, updating to the latest version of Redshift should improve performance for all users.