We've already looked at how well Redshift scales across multiple video cards, but how do individual cards compare to each other? Since it uses CUDA, only NVIDIA graphics cards are compatible with Redshift - but that still leaves a wide range of GeForce and Titan video cards to look at.

At publishing time, the latest version of Redshift is 2.6.11. The 2.6 release brought with it support for NVIDIA's Volta GPU architecture, so at the top-end of our test we will have the still-new Titan V. Along with that monster card, we have the previous-generation Titan Xp - based on the Pascal architecture - and a several GeForce 1000-series cards based on that same technology. To measure how fast each of these cards can render, we ran the benchmark included in the demo version of Redshift 2.6.11.

For our test platform, we wanted to use a high clock speed processor so that the video cards could really shine. Even though we aren't testing multiple GPUs We also needed a platform that would support as many video cards as possible in a large tower workstation. Given that combination of goals, the configuration which made the most sense was Intel's Xeon W - specifically, the W-2125 processor on a Gigabyte MW51-HP0 board. That provided the right PCI-Express slot layout for up to four GPUs, and the Xeon W-2125 runs fast: 4.0GHz base and up to 4.5GHz turbo.

Here are the Redshift 2.6.11 benchmark render times each of the video cards we tested: 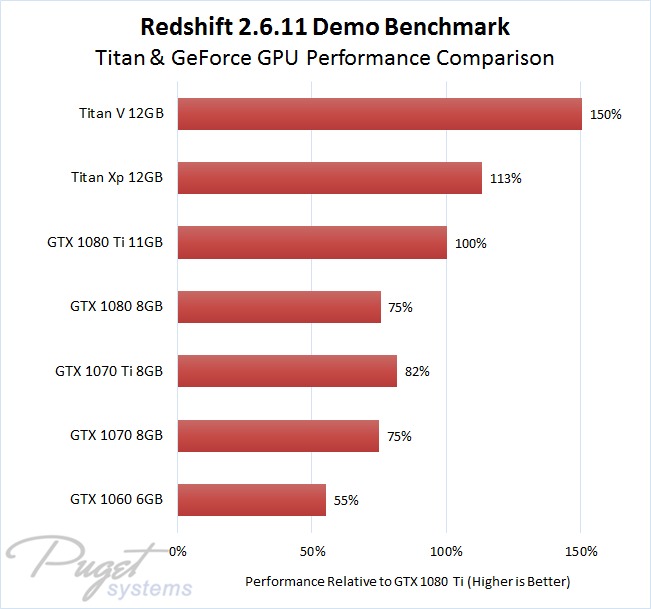 Looking further down the charts, the 1070 Ti beat the 1080 in an unexpected upset. GPU pricing is volatile these days, but the 1070 Ti usually costs a bit less than the older 1080 - so having better performance at a lower price is a nice surprise. That makes the 1070 Ti a good value if you need to save money, but keep in mind that it has less VRAM than the 1080 Ti and Titan cards (which limits scene size).

Keep in mind that these are single-card scores, though, and doubling (or tripling/quadrupling) up on a lower-end card will still give impressive results. For example, two GTX 1070 cards (not the Ti versions!) should be faster in Redshift than a single 1080 Ti. Two 1080 Ti cards, in turn, will also outpace a single Titan V... and cost less, too!

As expected, now that it is supported, the Titan V is by far the fastest GPU for rendering in Redshift - at least without crossing over to the even more costly Quadro GV100 or Telsa V100 territory. The Titan Xp, GTX 1080 Ti, and other cards also do well, though, especially when considering how much less they cost. Thanks to good multi-GPU performance scaling, stacking several of those cards would outperform a single Titan V. However, if you want the absolute best performance, multiple Titan Vs is the way to go.